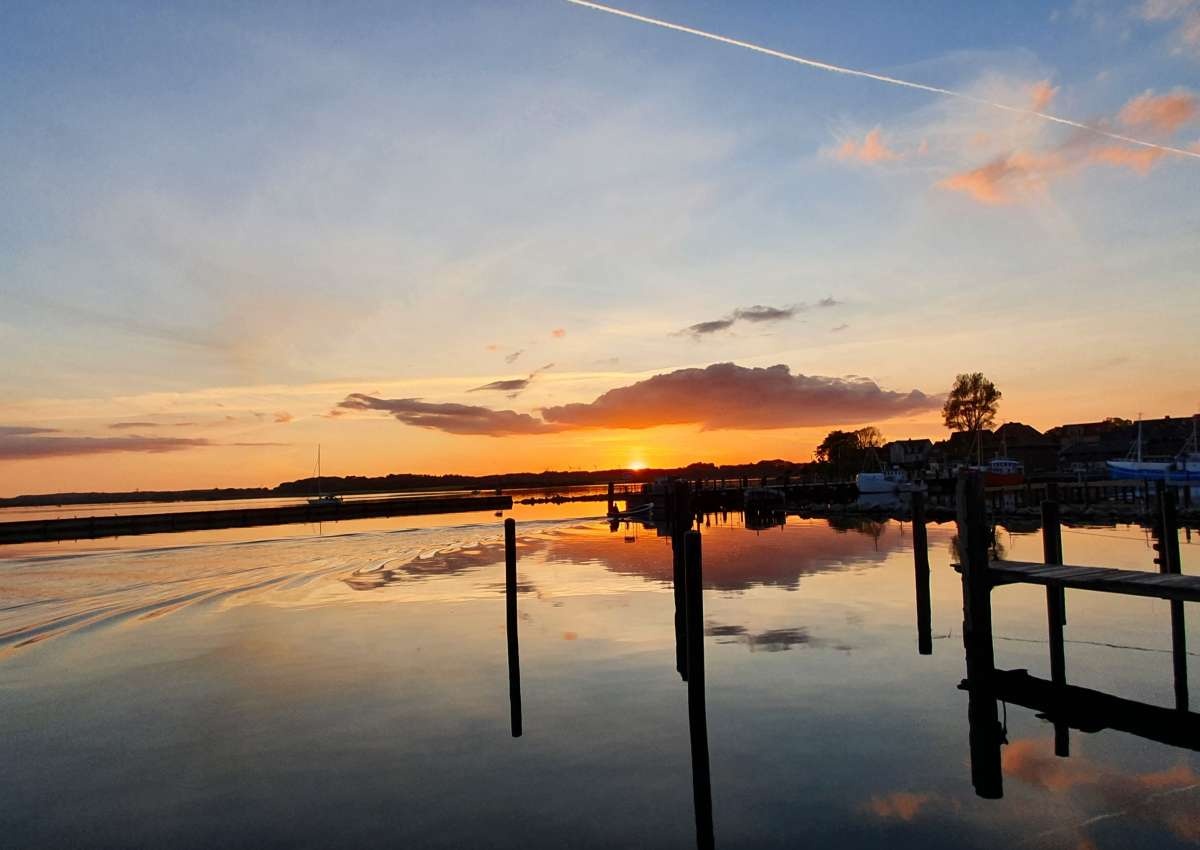 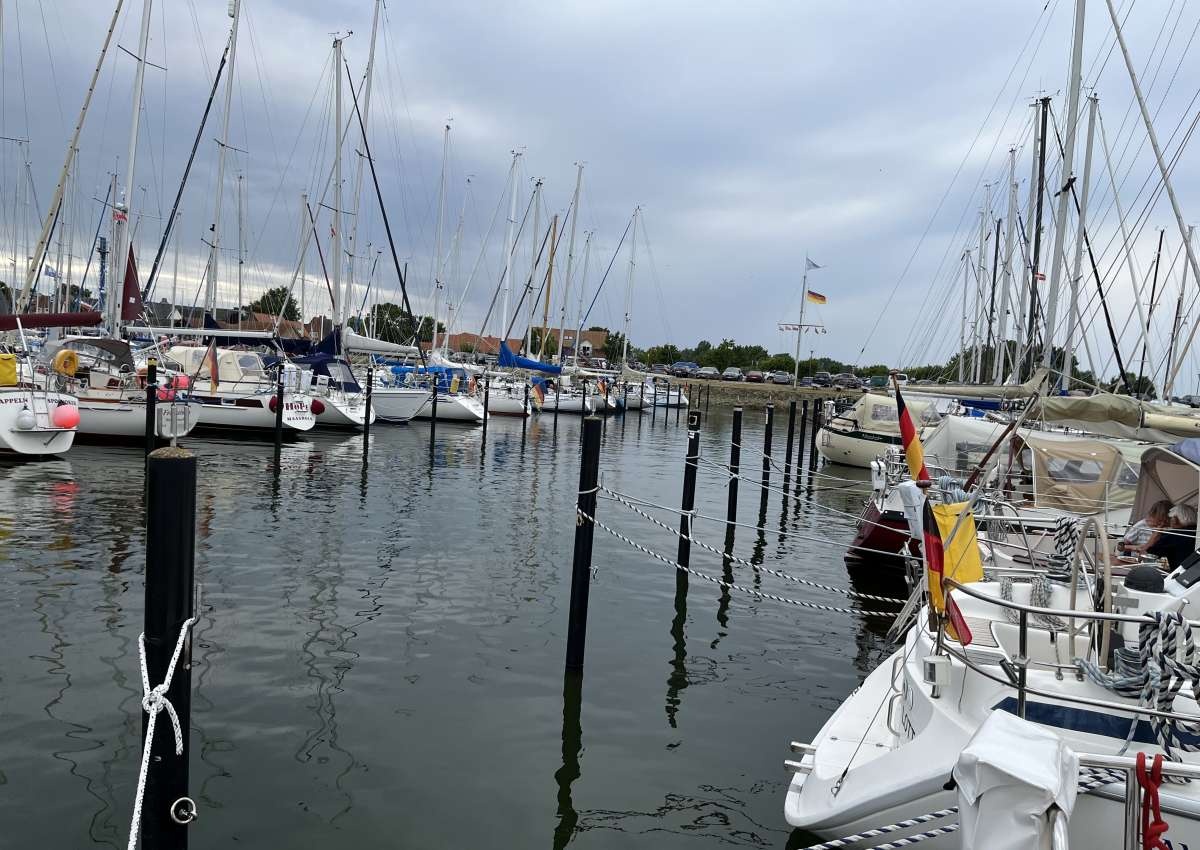 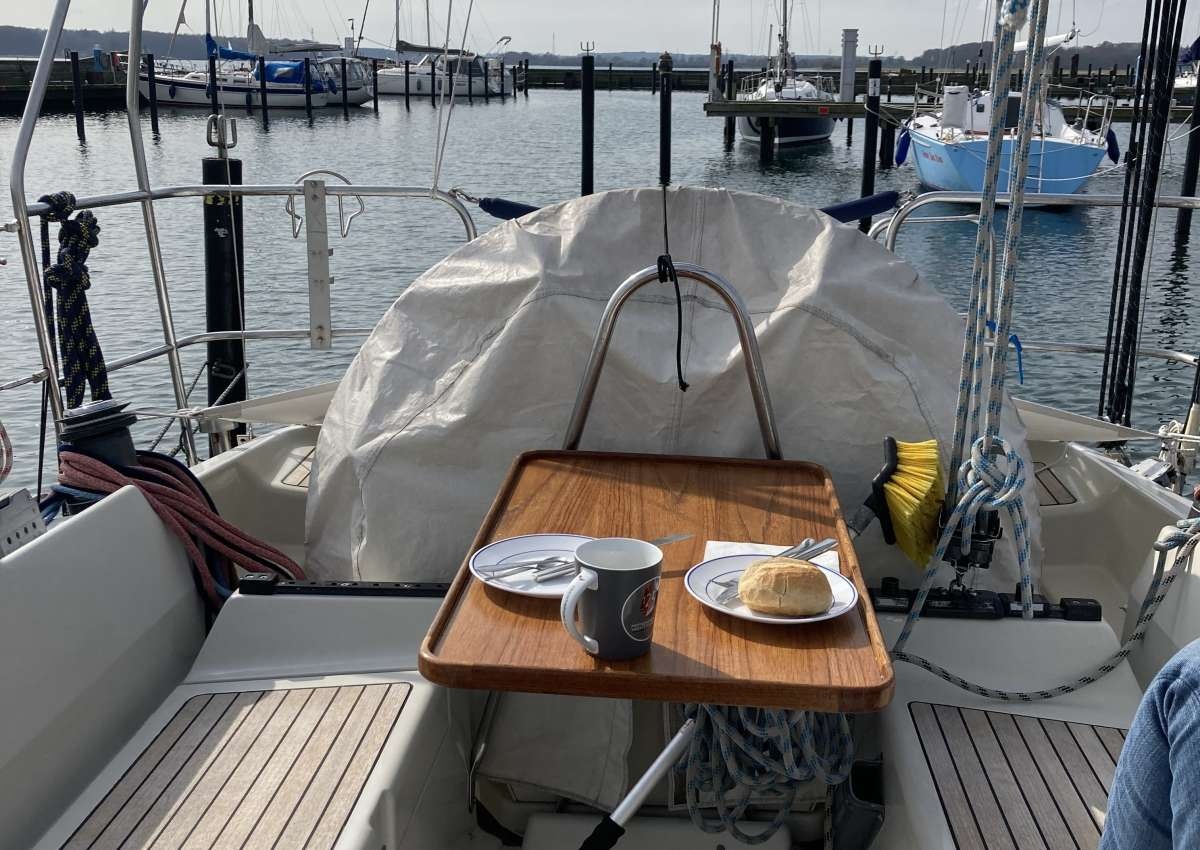 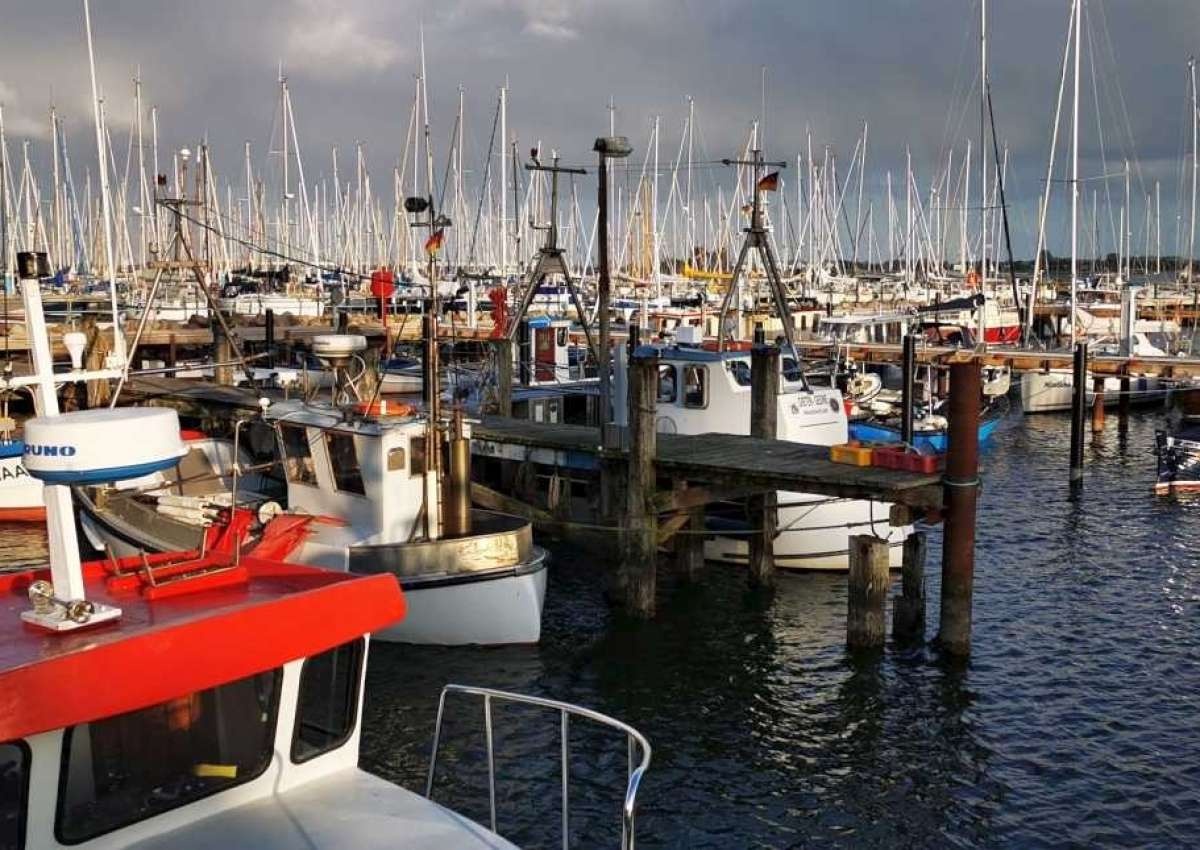 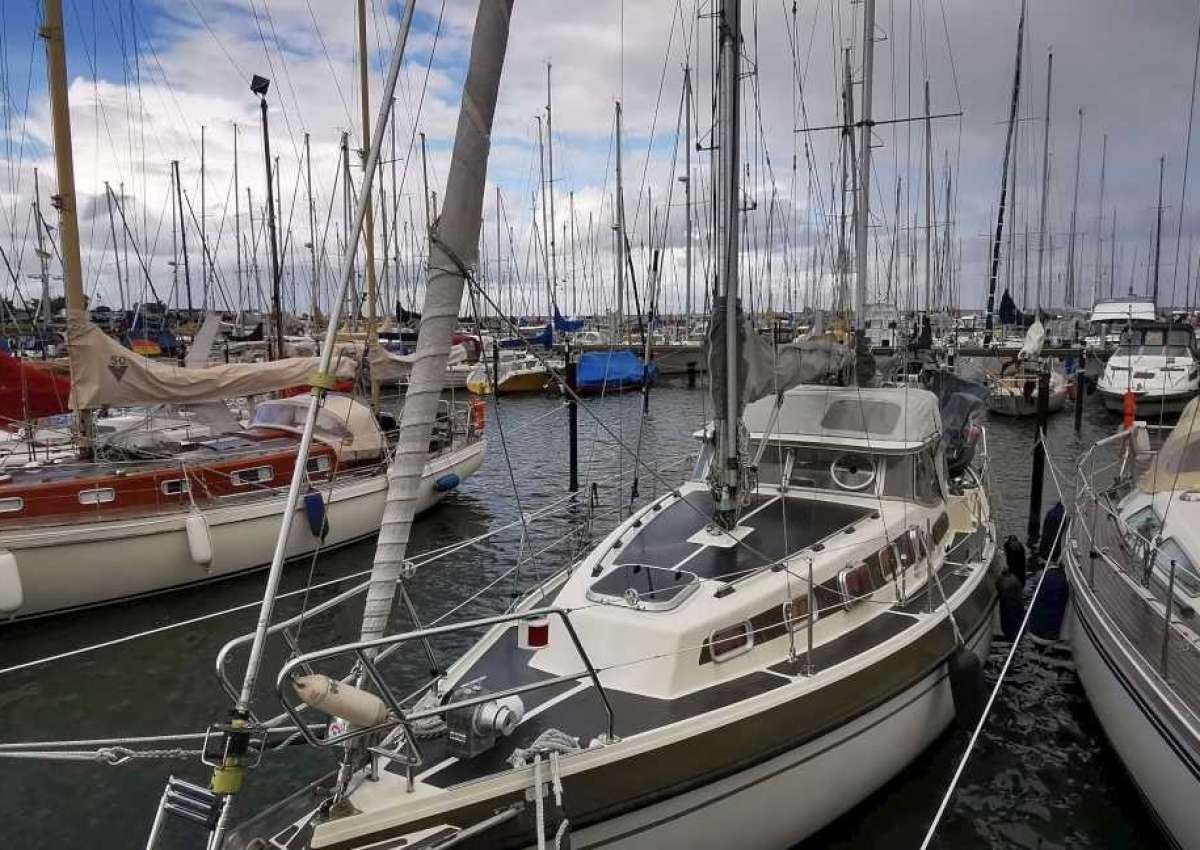 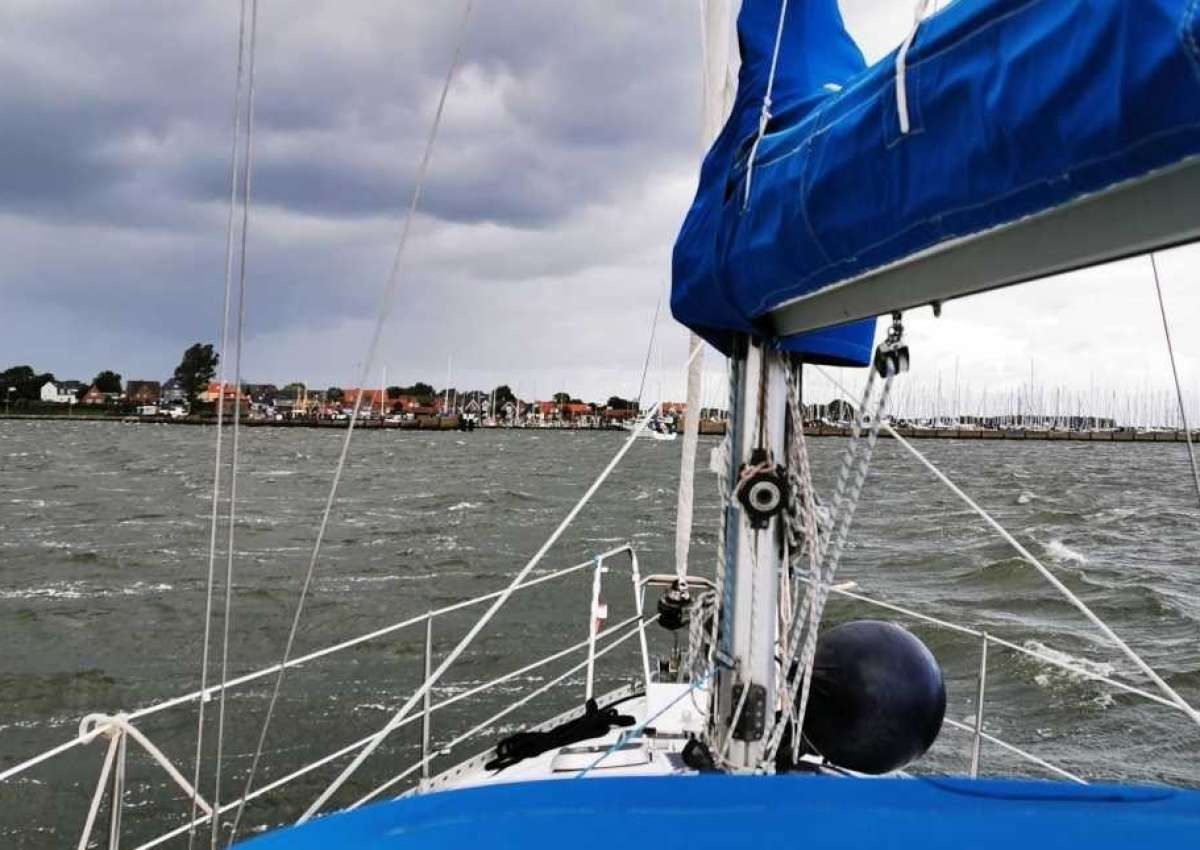 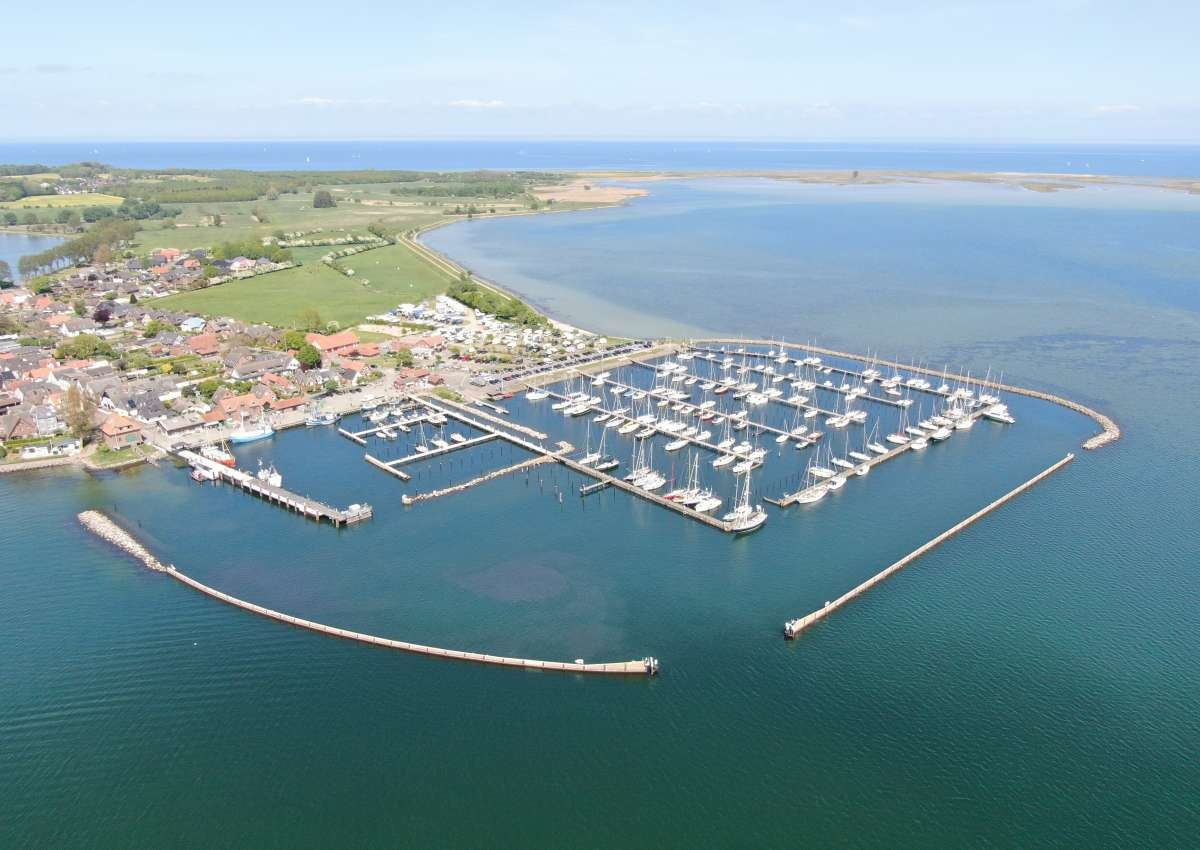 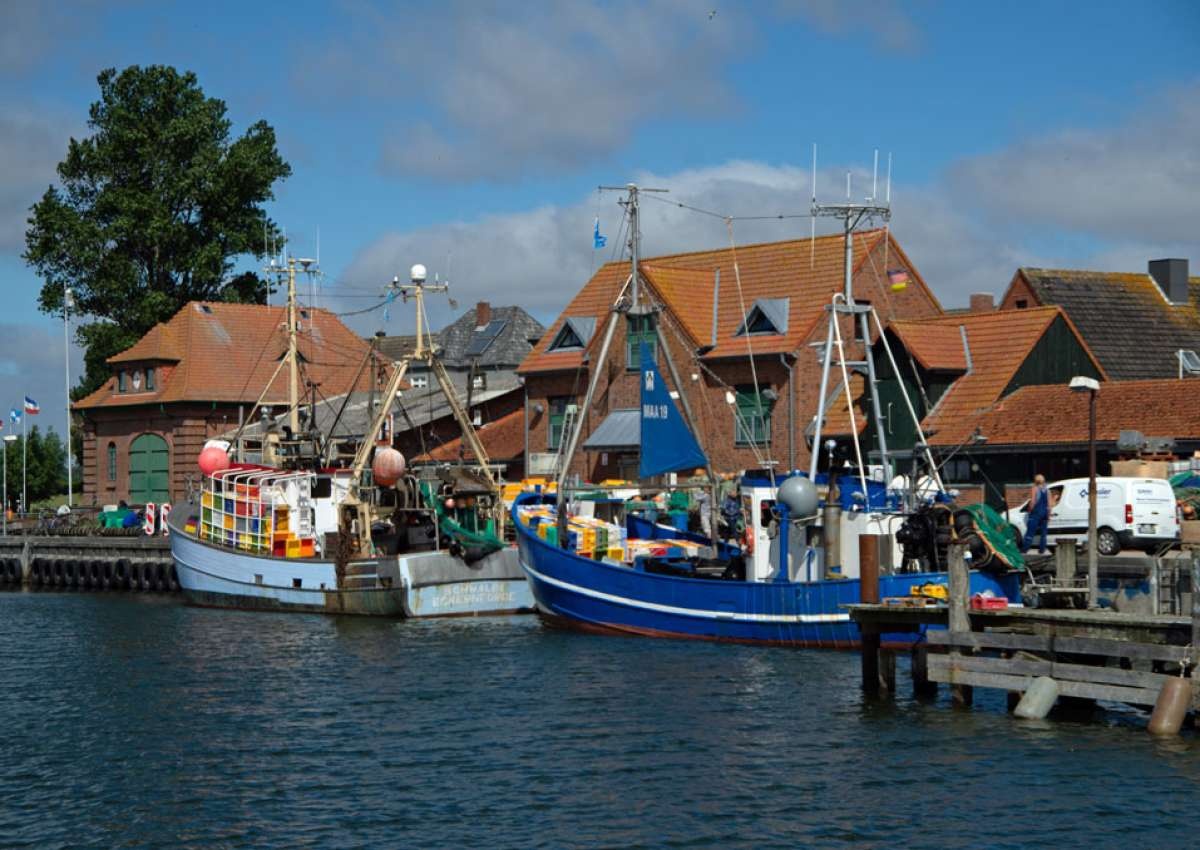 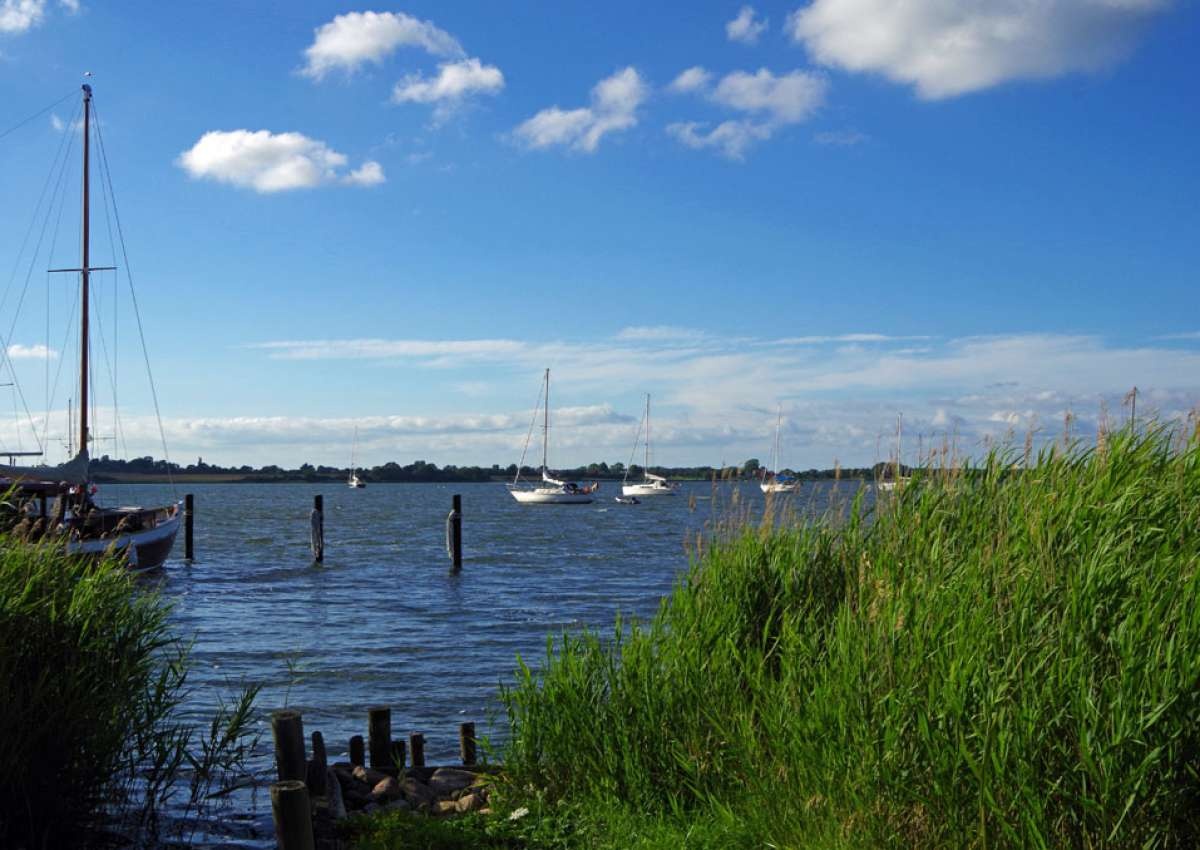 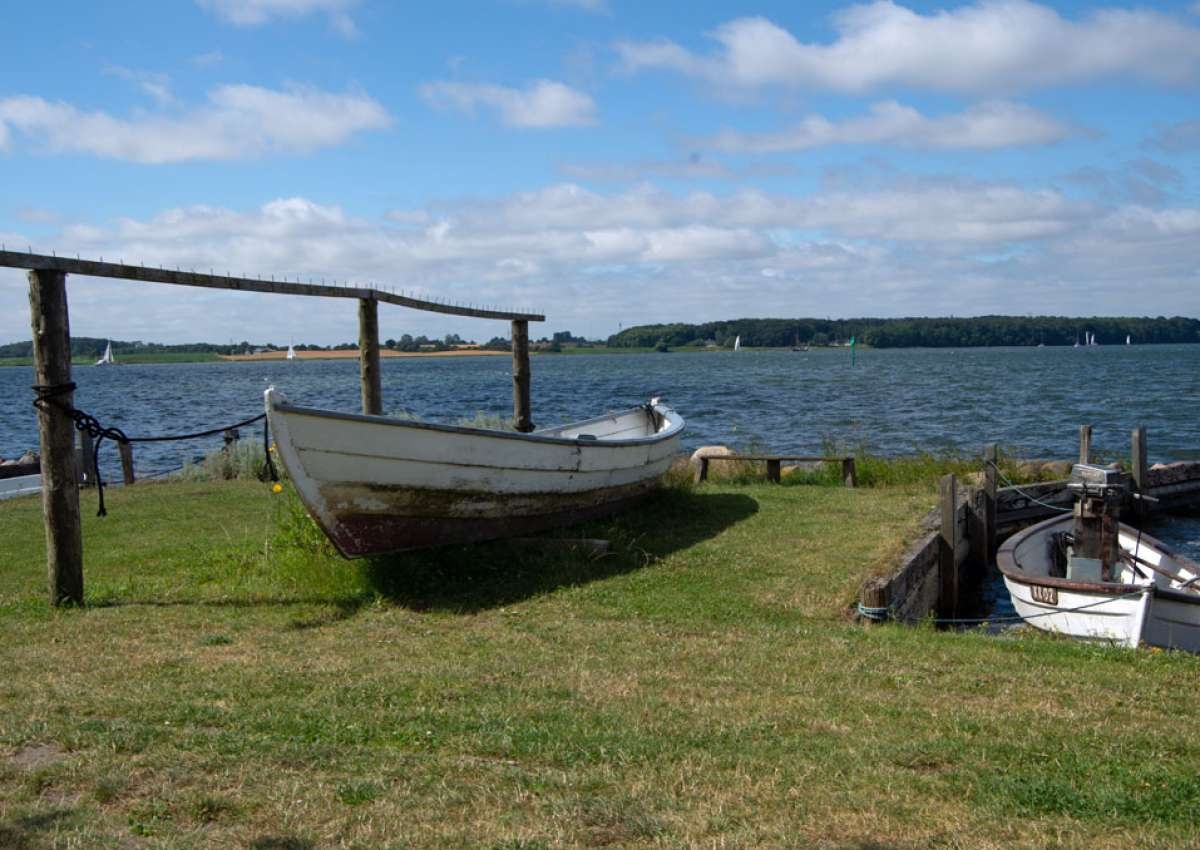 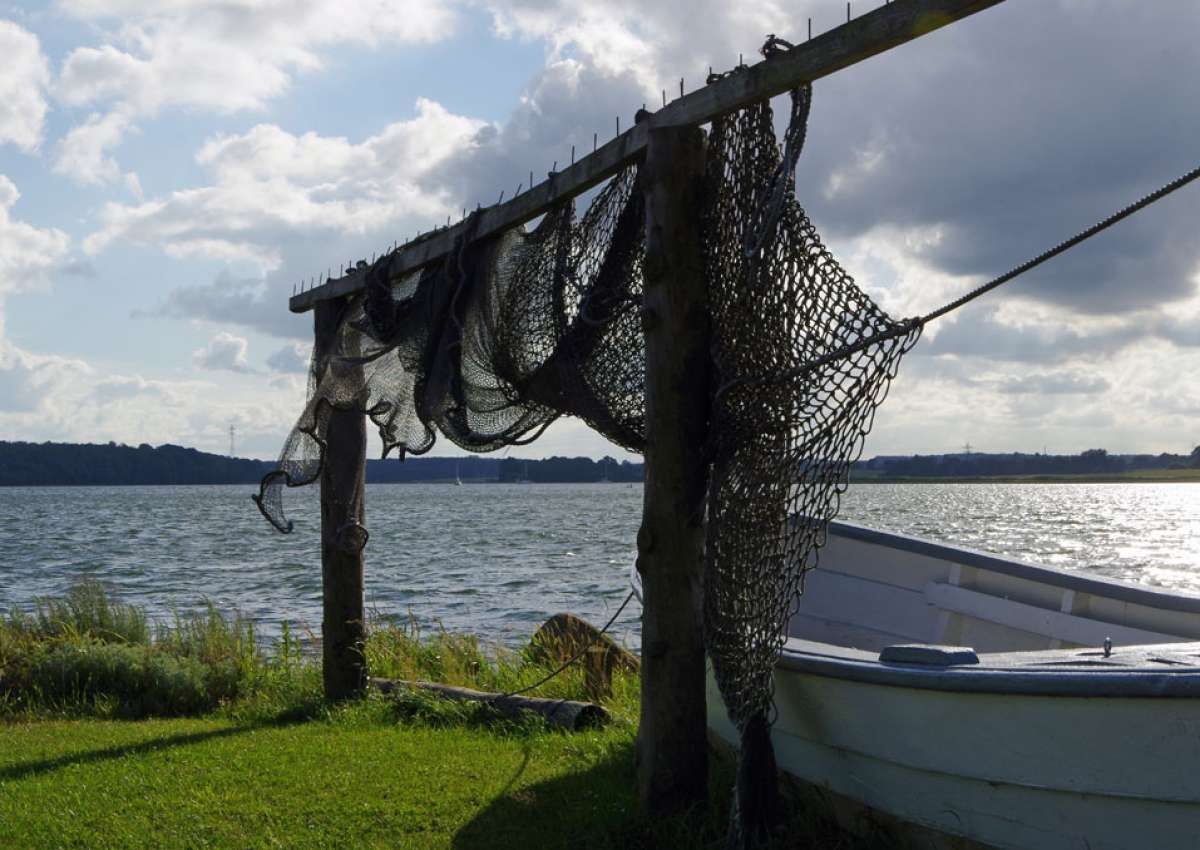 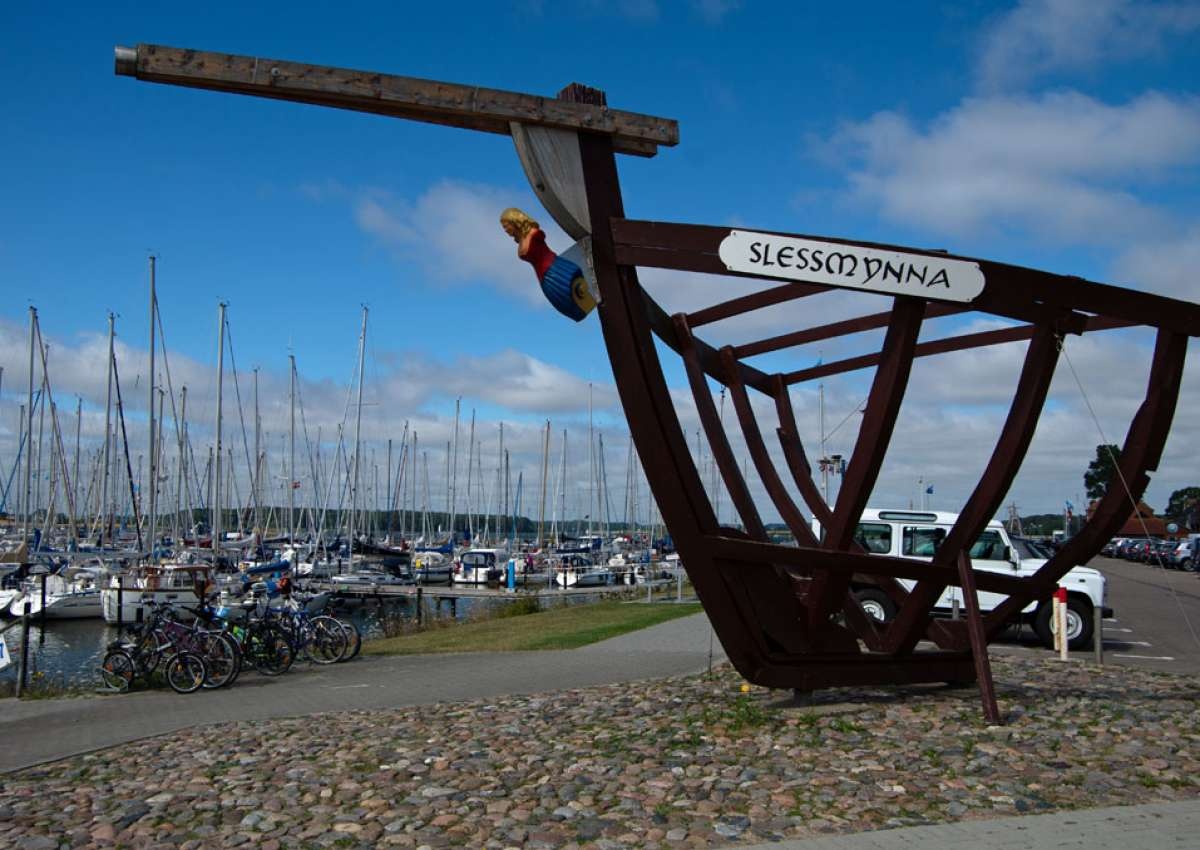 Small fishing port and a modern large marina near Schleimünde.

Entry is possible day and night. From the approach buoy 15/Maasholm2 you have to keep northwards towards the entrance of the yacht or fishing harbour. The entrances are illuminated at night and the approach buoy usually stands out well against the lighting of the harbour in the dark.

Guest berths in the marina with over 400 berths or in the fishing harbour at the two pleasure boat bridges in the south-eastern part. Here, passenger ships and fishing cutters, as well as heavy fishing operations, bring some disturbance at times during the season. Large yachts can moor at the outer piers, but these berths are sometimes very turbulent due to swells.

The popular excursion place Maasholm offers the sports skipper all possibilities of supply. In addition, Maasholm is home port for a lifeboat. The place is a worth seeing small fishing village, where fishing still plays a role today.

EC payment is not possible in all shops / pubs.

The peninsula Oehe, on which Maasholm is located, was originally an island between two sluice connections to the Baltic Sea. Around 1770, a dike was created in the north near the Oehe estate, followed by the construction of a dam, thus gaining 100 hectares of fertile land. However, the land was lost again during a storm tide. It was not until the beginning of this century that attempts to drain the land were successful, and the island of Oehe finally became a peninsula. The immediate predecessor of Maasholm, the small Maas or Maes northeast of today's village, existed only for a few decades, according to the community chronicler Horst Franzen. He writes in his chronicle of Oehe-Maasholm that in 1663 the noble house of Gottorf forbade "those living on the Maas" to interfere with fishing in the Schleim estuary.

According to old lore, floods caused by the northeast wind so damaged the fishing settlement that the inhabitants gave up just 20 years after the village was founded and created the new village of Maasholm on the western heights around 1700. The subjects of the new settlement were granted the right to fish in the Olpenitz Noor and the Schlei by royal decree.

The sea determined the history of Maasholm as the only basis of existence in the following 100 years. More and more the citizens shift to trade and freight sailing. In 1835 the village already counts a fleet of 29 ships. But the upswing only came about with the construction of the artificial mouth of the Schleim through the Olpenitz arm of land. The silting up of the old mouth of the river Schleim had caused more and more problems for the sailors (see also Schleimünde). The community chronicler writes that the large shipping traffic even required a royal customs inspector in Maasholm.

The trade with Copenhagen was especially important for the people of Maasholm. When bridges were built there, they therefore had their masts converted into folding masts, because the goods were not unloaded at the quay there, but usually sold directly from the ship in the city canals - a procedure that could take weeks. Because of the close trade links with Copenhagen, the German-Danish War of 1864 (the Duchy of Schleswig became Prussian) meant the demise of Maasholm's cargo sailing.

The new source of income was obvious, or rather swam right to the doorstep. The seafaring experience of the inhabitants quickly made Maasholm one of the most important fishing towns on the Baltic coast. Bream, roach, pike-perch, pike, herring, eel, perch, salmon and tench were, and in some cases still are, fished from the Schlei on their own.

Only the cod is no longer willing to make a trip into the Schlei because, according to legend, it has had bad experiences here. He is said to have felt so at home in the Schlei that the fishermen had trouble catching anything but codfish for once, which of course led to yawning boredom at the dining tables of the Schlei households. One bitter girl, who had to eat cod particularly often and was probably tired of the saying "we eat what we get", gouged out the eyes of a live cod and shouted: "Away with you, you disgusting scaly animal". Word of this cruel treatment spread quickly among the cod, and within a very short time no more cod were seen in the Schlei. Since that time the people at the Schlei eat mainly herring, claim evil tongues probably so long, until one day a heartless girl .....

Still there is exquisite fish to buy in Maasholm, and in the restaurants fish specialities are on the menu. Nevertheless, the importance of fishing has declined significantly - compared to days gone by - and tourism is more and more taking its place as a source of income. The tourist attraction is not surprising, as the picturesque little fishing village, which can only be reached from land via a causeway, has been able to retain much of its original character. Above all, the Westerstraße with its typical cobblestone pavement and old half-timbered and thatched houses is one of the village's most prominent features. It runs almost exactly in a north-south direction. The further east you go in the village, the more new buildings you come across, which do not fit into the otherwise homogeneous picture. In contrast, the St. Peter's Chapel, built in 1952 at the end of Westerstraße, fits perfectly into the village's image.

The recommended walk around Maasholm leads past the church and along the shore of the Wormshöfter Noor, where the fishermen's old barges are lined up below the footpath. The Wormshöfter Noor was once the northern lock connection to the Baltic Sea. Nature lovers can walk to the Nature Experience Centre (NEZ) or to the Oehe-Schleimünde bird sanctuary, which, however, may only be entered during guided tours. The bird warden of the "Jordsand" association invites you to these tours every day during the season at 10 am and 3 pm (except Mondays) and from Schleimünde, depending on the arrival time of the ferry. The NEZ regularly hosts events in the series "Maasholmer naturwissenschaftliche Vorträge".

Maasholm Bad, located about two kilometers north of Maasholm, is a pure holiday home settlement of modern design, which you do not necessarily have to have seen. However, the Oehe estate to the north of it is worth a walk. The hiking trail leads along the Baltic Sea. On the estate you will find a café & bistro in the former horse stable. According to the chronicle of the village, a princess from Tahiti was once the lady of the manor. Margret Terii nui (great princess) tahurai Marama tepau Brander had renounced her rights to the throne (in Tahiti female succession applies) in order to marry the rich merchant Schlubach. Schlubach had come to money and fame as a penniless sailor in a similar way as the Gelting baron Sönke Ingwersen (see Gelting). At the age of 20 years, so writes community chronicler Horst Franzen, Schlubach sailed in 1856 alone (!) and without fortune on a small barque around Cape Horn to Valparaiso, where he quickly made a career with his small trading company Schlubach u. Co. and was finally appointed Imperial German Consul General for Chile in 1872. With a fortune of 25 million marks he returned to his old home, bought the Oehe estate and had it made into a summer residence for his large family. It is said to have been no rarity for 40 people to sit at table in the manor house.

In the harbour area there is a beautiful large playground where children can play undisturbed and in peace.

Joachim, Into the Blue