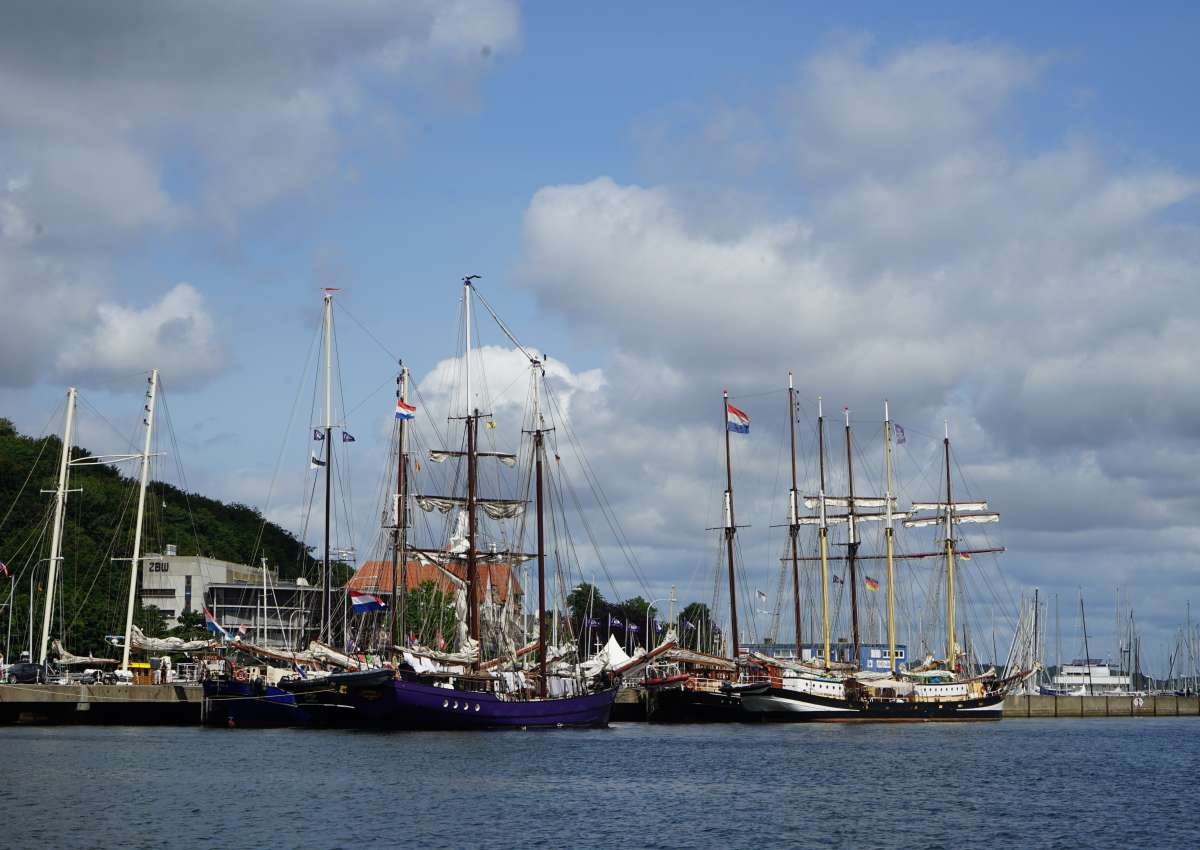 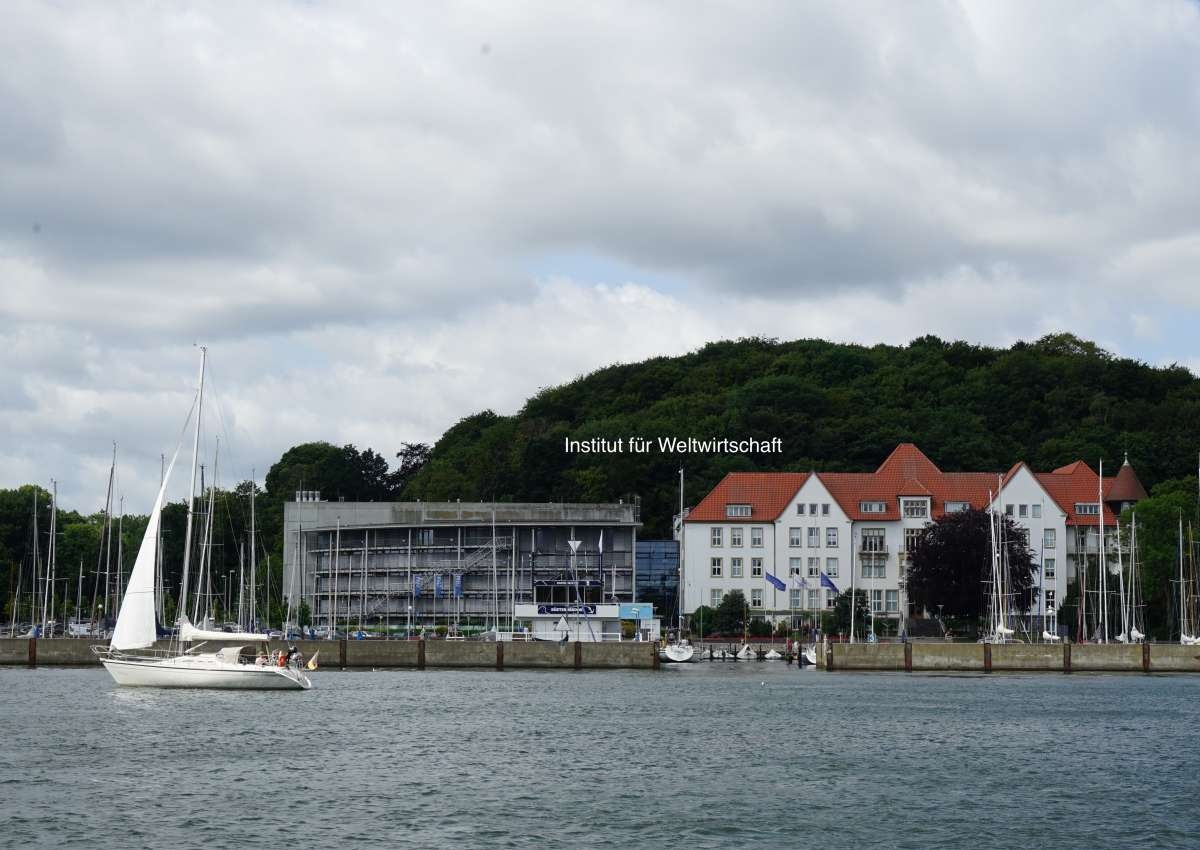 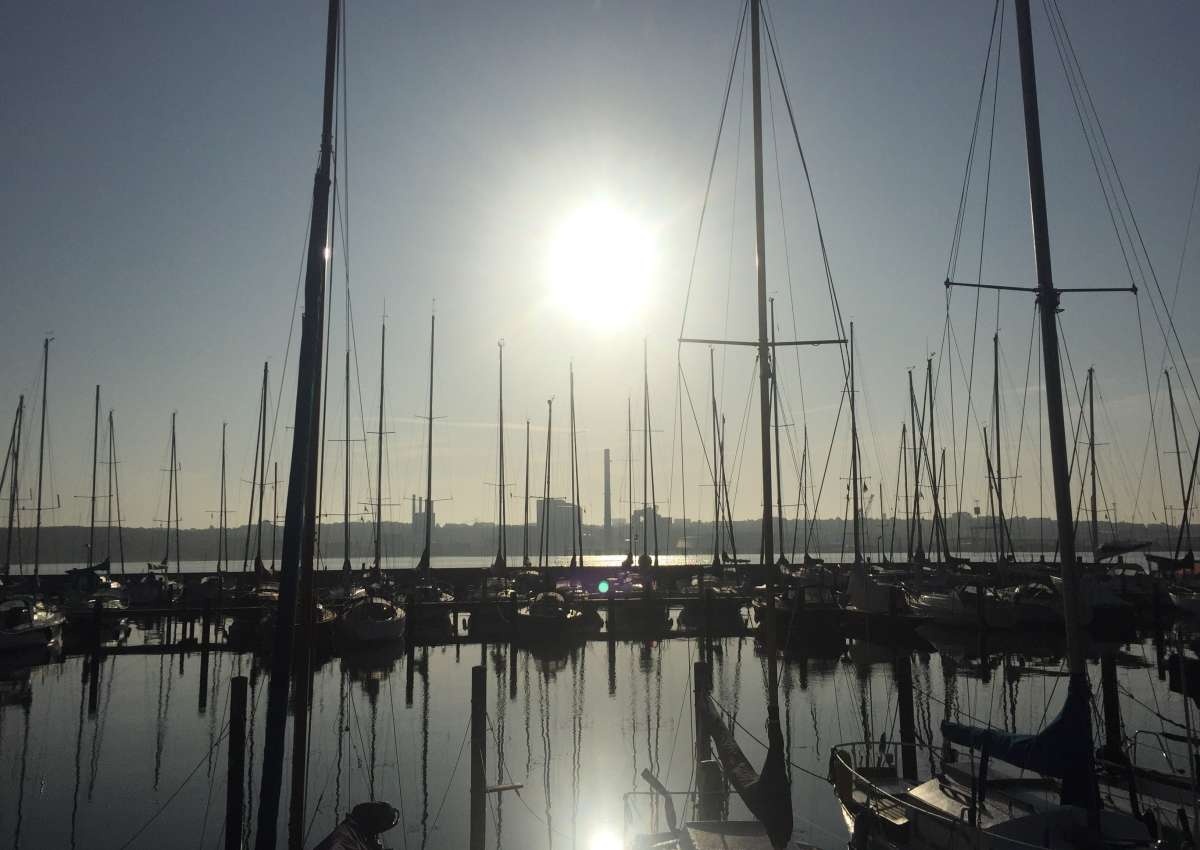 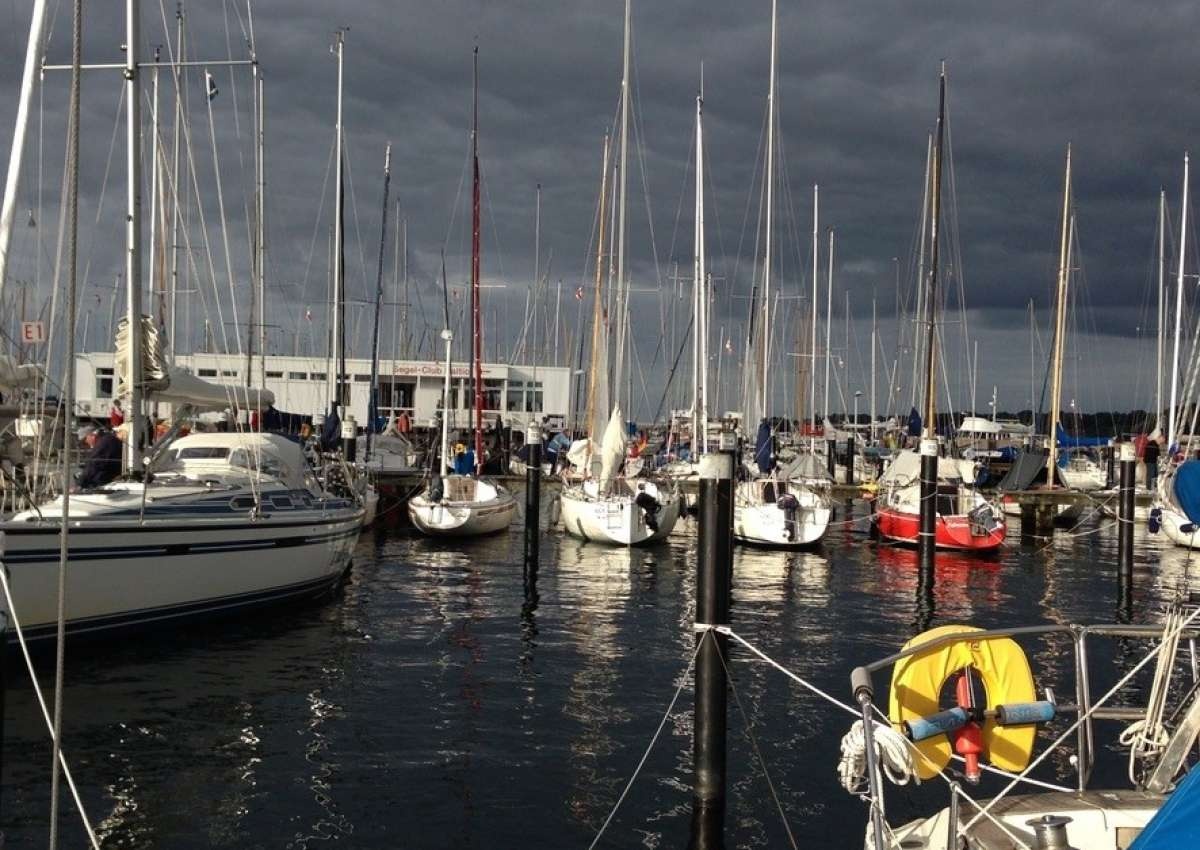 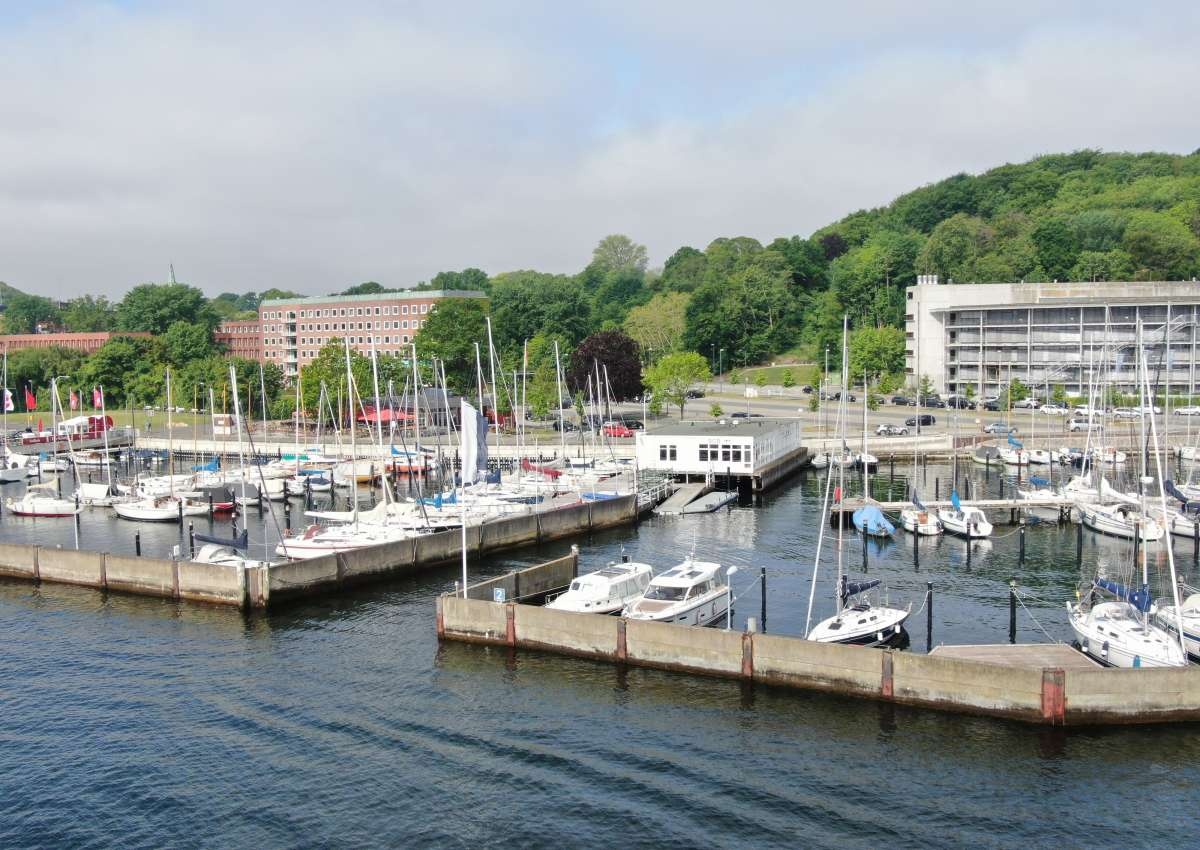 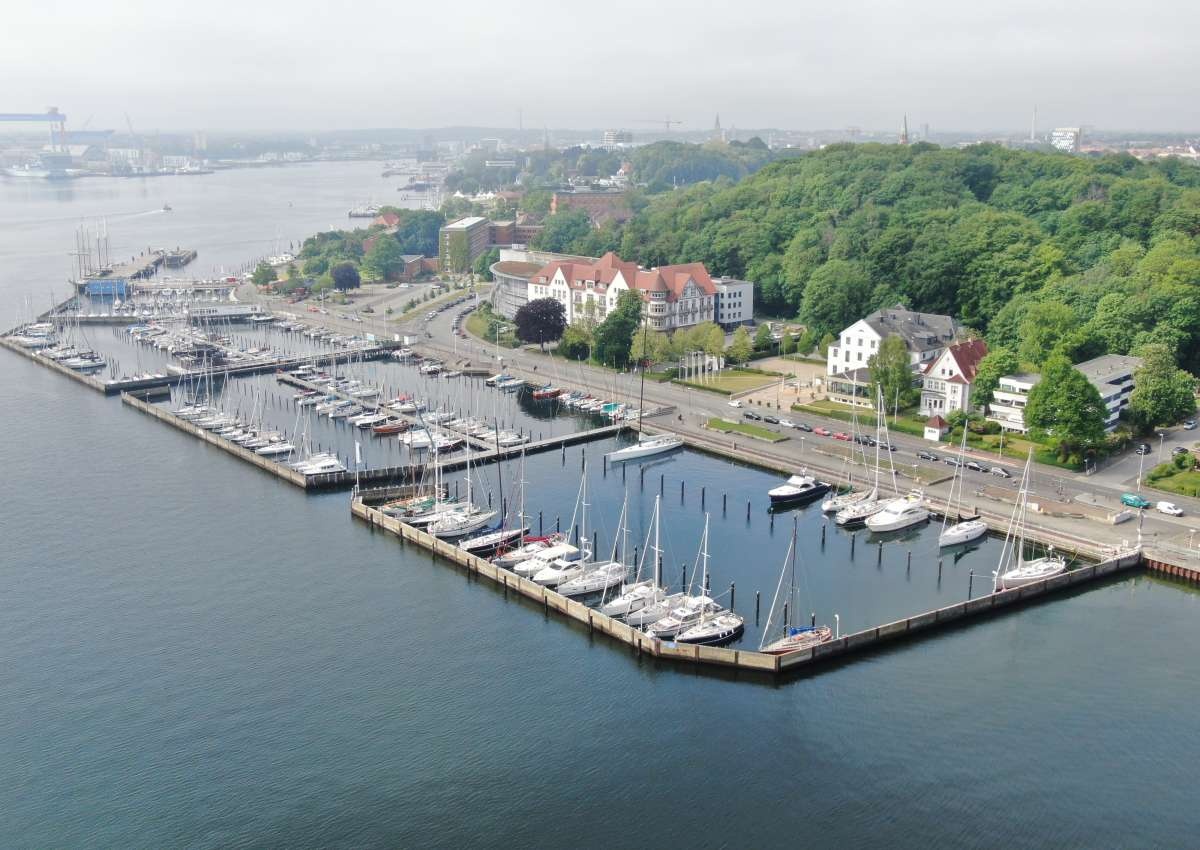 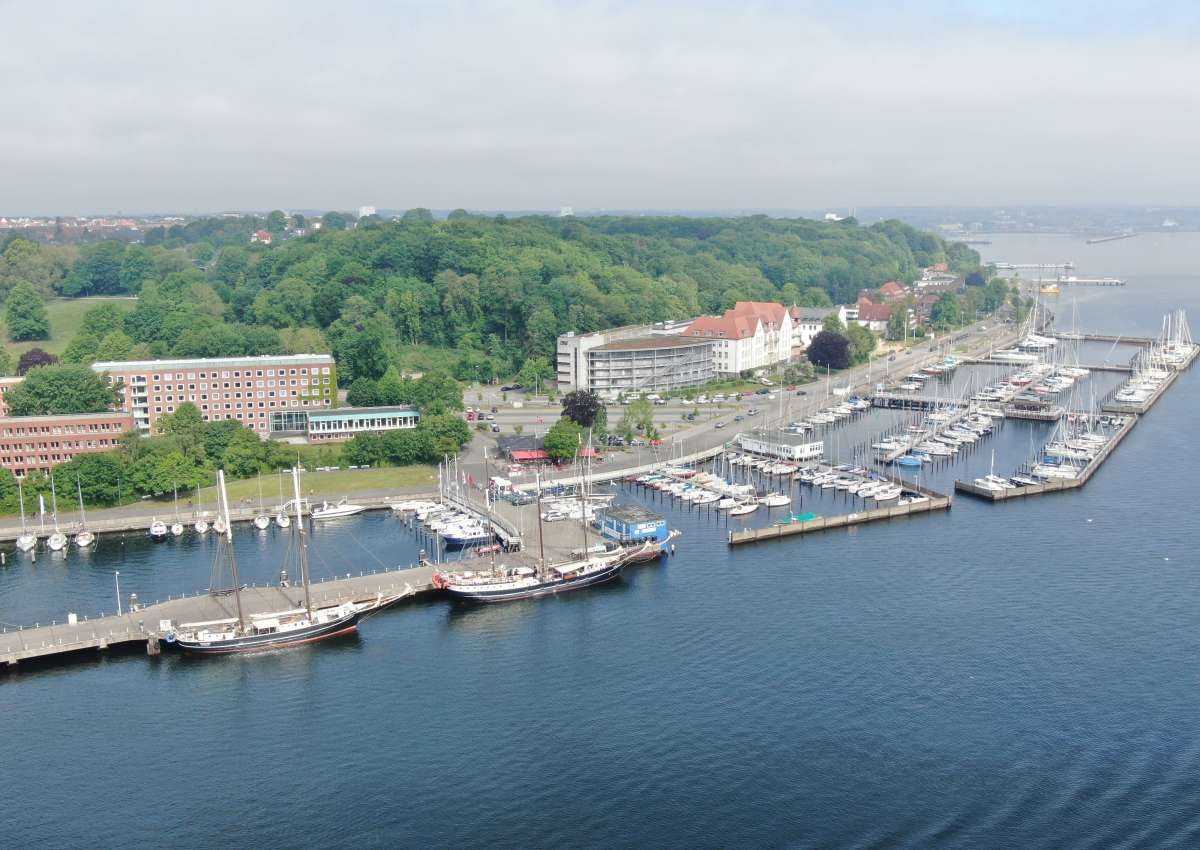 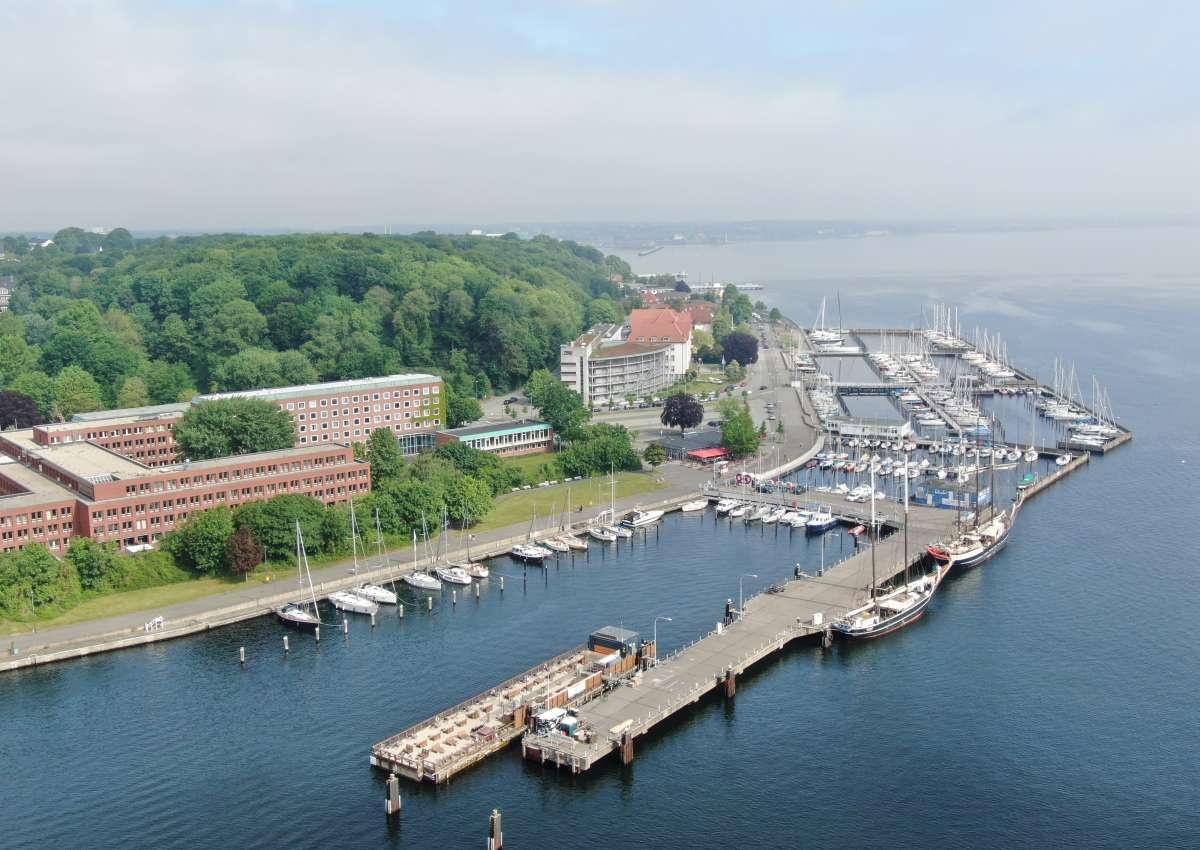 The largest marina in Kiel's inner fjord, it was an Olympic port in 1936 and is therefore often still called the Old Olympic Port by locals.

The entry is unproblematic day and night. At night, you first enter Kiel in the lit fairway and then steer at right angles to the respective entrance.

Guests moor where green boards mark the free berths and then report to the harbour master. The water depths here range between 2 and 4 m. In the northern basin, the so-called "million basin", only the larger yachts from approx. 13 m in length are moored.

The Düsternbrooker marina is located not far from Kiel's city center on the famous "Kiellinie". The sports skipper is offered all the possibilities of supply of a large port city.

The nearest supermarkets and many other shopping opportunities are located in Holtenauer Str., which can be reached after just under 2 km walk through the beautiful district of Düsternbrook. A small selection of boating accessories can be found about 3 km away in the Segelkiste, Wall 34-38.

The Old Olympic Harbour is the closest suitable berth for yachts to the centre of Kiel. The harbour is located at the exclusive clubhouse of the Kiel Yacht Club When the "K"' of the 100-year-old Kiel Yacht Club still stood for "Kaiserlicher", Wilhelm II took part in the Kiel Weeks with his yacht "Meteor". Due to his generous sponsorship he was appointed Commodore of the Club. Today, Kiel Week is more than an international sporting event with huge regatta fields. One of the main attractions on land is the Kiellinie, where music groups, actors, jugglers and action artists meet. Every year in the last week of June Kiel becomes a big fairground, where culinary delights from all over the world are offered for sale at the European market in front of the town hall. During this time, trying to get a berth in the fjord is almost hopeless.

The area south of Düsternbrook harbour is also popular for spectator-friendly major regatta events under the label 'Kiel Sailing City'. ACC yachts and Extreme40 catamarans have already been guests here and delivered thrilling battles in front of packed grandstands. At 'Camp 24|sieben' not only students from Kiel make their first sailing experiences.

From Düsternbrook you walk about 15 minutes to the city centre. However, the busy centre of the state capital is not particularly attractive. However, it must be taken into account that large parts of Kiel were destroyed during the Second World War. For example, the Alte Markt (Old Market) at the upper end of the pedestrian zone "Holstenstraße"" has nothing left of its original buildings. The square looks desolate. As a shopping city, Kiel is worth a visit, especially for the many Scandinavians who like to come to Kiel on large ferries. The Gothenburg ships moor at the Schwedenkai in the inner fjord and just opposite is the Norwegenkai, the mooring point for the Oslo ferries on the eastern shore. From here it is only a short distance to the city centre. The huge shopping centre at the station, the "Sophienhof", is particularly popular. It houses numerous shops under one roof.

Kiel was founded around 1240 by the Holstein count Adolf IV von Schauenburg. Scholars argue about the origin of the name. It is conceivable that the name once stood for bodies of water or referred to the wedge shape of the fjord. The apparent advantage of a navigable inlet deep into the country turned out to be a disadvantage in the times of the Hanseatic League. The city was located away from the usual shipping routes. The first attempt to create an east-west connection by extending the Eider failed. Instead, the Kiel transshipment became an important lifeline for Kiel from the 15th century onwards. It developed into the central market for money transactions and goods in Schleswig-Holstein. The foundation of the university by Duke Christian Albrecht in 1665 had a positive effect on the economy. In the 18th century, the opening of the Eider Canal revived the economy (see also Holtenau). In 1871 Kiel became an imperial port after the Prussians discovered the strategic importance of the city. The rapid build-up of the Kriegsmarine brought with it a flurry of building activity that did not exactly shine with architectural achievements.

In Kiel began what ended after the lost First World War with the abdication of Kaiser Wilhelm II and the proclamation of the Republic in Germany. The sailors refused to sail their ships again at the end of the war. Their revolt became the prelude to the November Revolution of 1918.

After World War II, two-thirds of the city of Kiel was completely destroyed. In contrast, the town hall had survived the war to some extent and was restored in 1950. It had been inaugurated in 1911 in the presence of the Kaiser.

The town hall tower is Kiel's landmark. During the summer months, tours of the town hall are available with a trip up the tower. The whole city can be overlooked from there from a height of 67 metres. The neighbouring opera house is only a jewel from the town hall market. On the other side stands an unsightly extension with a dark glass façade. Where the Kleine Kiel used to be connected to the Förde, there is now the Holstenbrücke. The two bodies of water are now only connected by an underground canal. Asmus Bremer, a former Kiel mayor, has been sitting motionless on a bench in front of the "Kieler Nachrichten" for years - not in the flesh, though, but cast in bronze.

For those interested in culture and history, Kiel has a lot to offer. To list all the sights and facilities would be going too far here. Worth a visit are, among others, the city museum in Warleberger Hof, the regional history collection in the castle, the maritime museum at the Seegarten and the impressive Schleswig-Holstein open-air museum in Molfsee (easy to reach by bus). Of the castle situated on the northern edge of the old town, only the western wing was not destroyed during the war. In addition, there is a small and a large concert hall, in which mostly classical music is offered. For pop and rock concerts the Ostseehalle at the Exerzierplatz is available. Live groups also perform at "Spizz"' on the corner of Eichhofstraße and Eckernförder Straße. Satori & Berger Kai is also home to the state library, which has around 150,000 volumes.

The "Dream Factory" near the "Stinkviertel" offers live music as well as cinema and theatre performances. In the open-air museum Molfsee on the southern outskirts of the city, numerous old farmsteads, barns and windmills from all over the country have been faithfully rebuilt. Around 60 buildings, including a dairy, a small school, a pharmacy with herb garden and even a reconstructed bridge can be admired. Some of the old workshops are still in use. However, visitors should be good on foot.

The Zoological Museum and the Museum of Ethnology are located at Hegewischstraße 3. While the Zoological Museum displays whale skeletons, among other things, the Museum of Ethnology shows fabrics, weapons and carvings from the former German colonies. The university's Old Botanical Garden, which is well worth seeing, is located on Düsternbrooker Weg. It consists of several greenhouses with exotic plants and a viewing pavilion.

The Institute of Oceanography on the Kiellinie is considered the largest oceanographic teaching and research facility in Central Europe. Visitors are shown around 150 marine creatures in more than 20 display tanks. The seals can also be observed directly from the Kiellinie, as their basin is partly outdoors.

Between the northern Kiellinie and Düsternbrooker Weg, the state government has its headquarters. In fine weather, a trip to the "Forstbaumschule", a popular beer garden restaurant in the park-like Düsternbrooker Gehölz, is recommended. The garden restaurant can be reached via Düsternbrooker Weg, Lindenallee and Schlieffenallee. From Schlieffenallee, walking paths lead right into the park, where many Kiel residents enjoy the beautiful weather in summer. If you want to get to know all the sports boat harbours on the Kiel Fjord in a hurry, you can take advantage of the excellent ferry connections to Möltenort, Laboe, Holtenau, Schilksee etc.