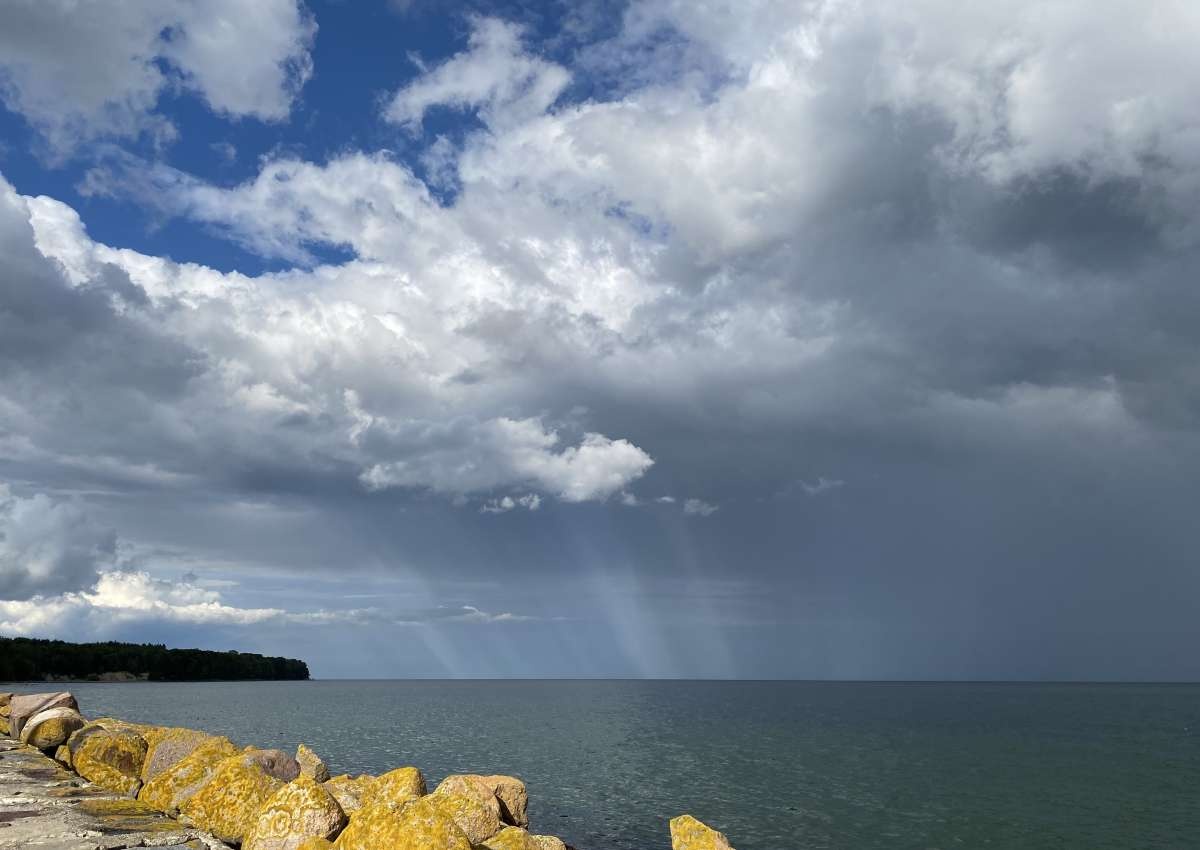 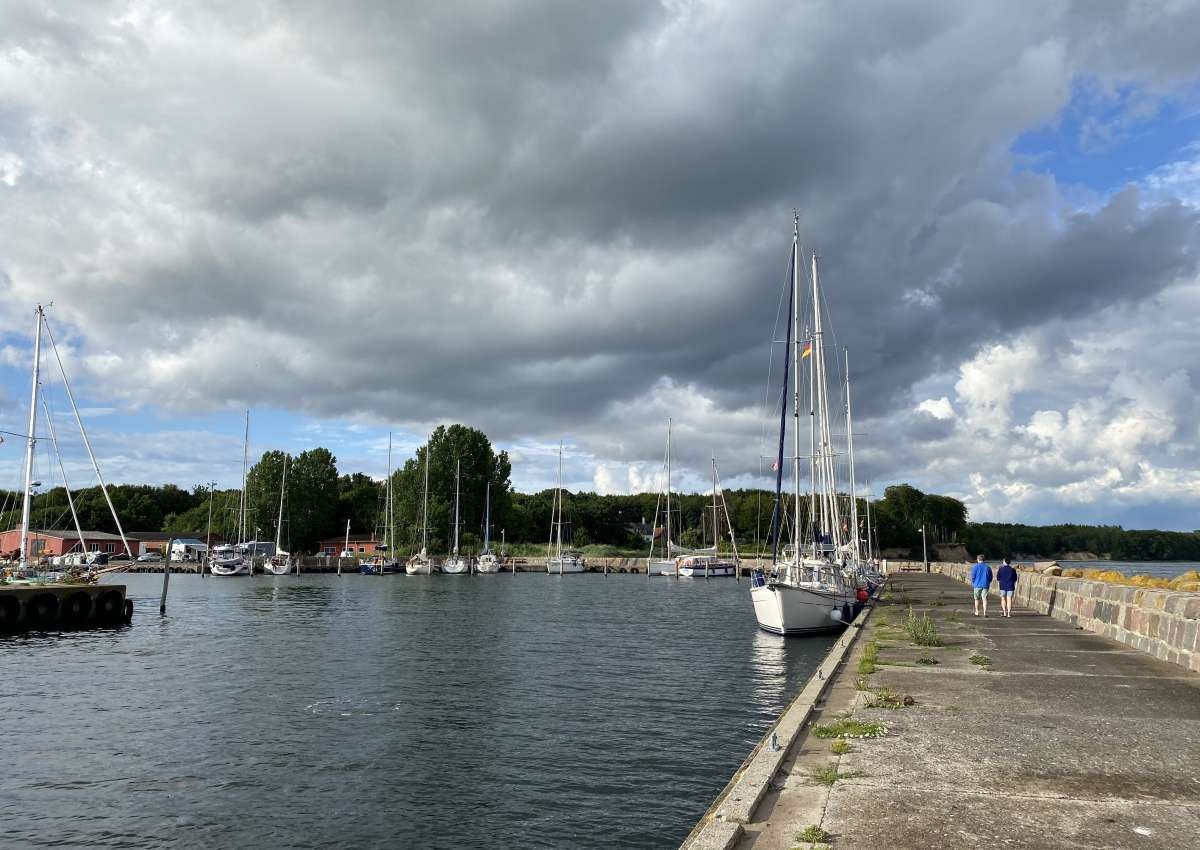 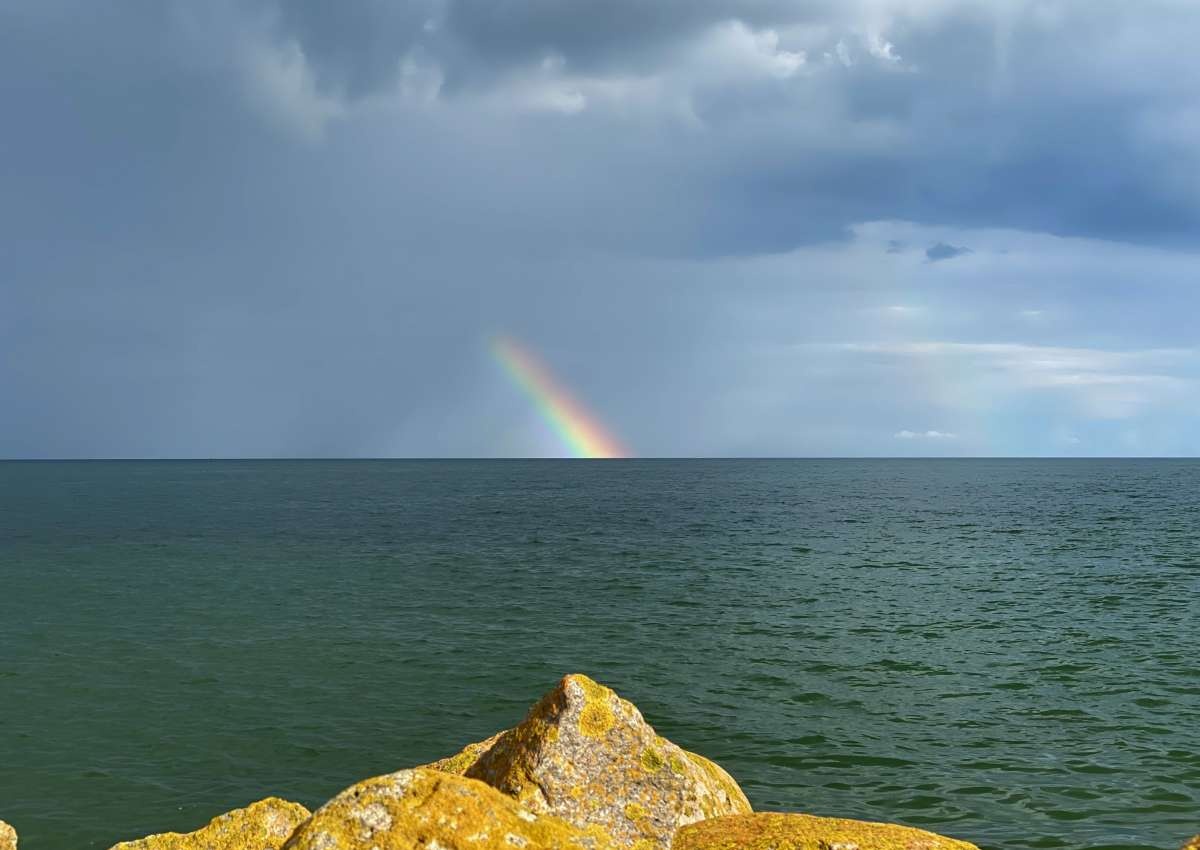 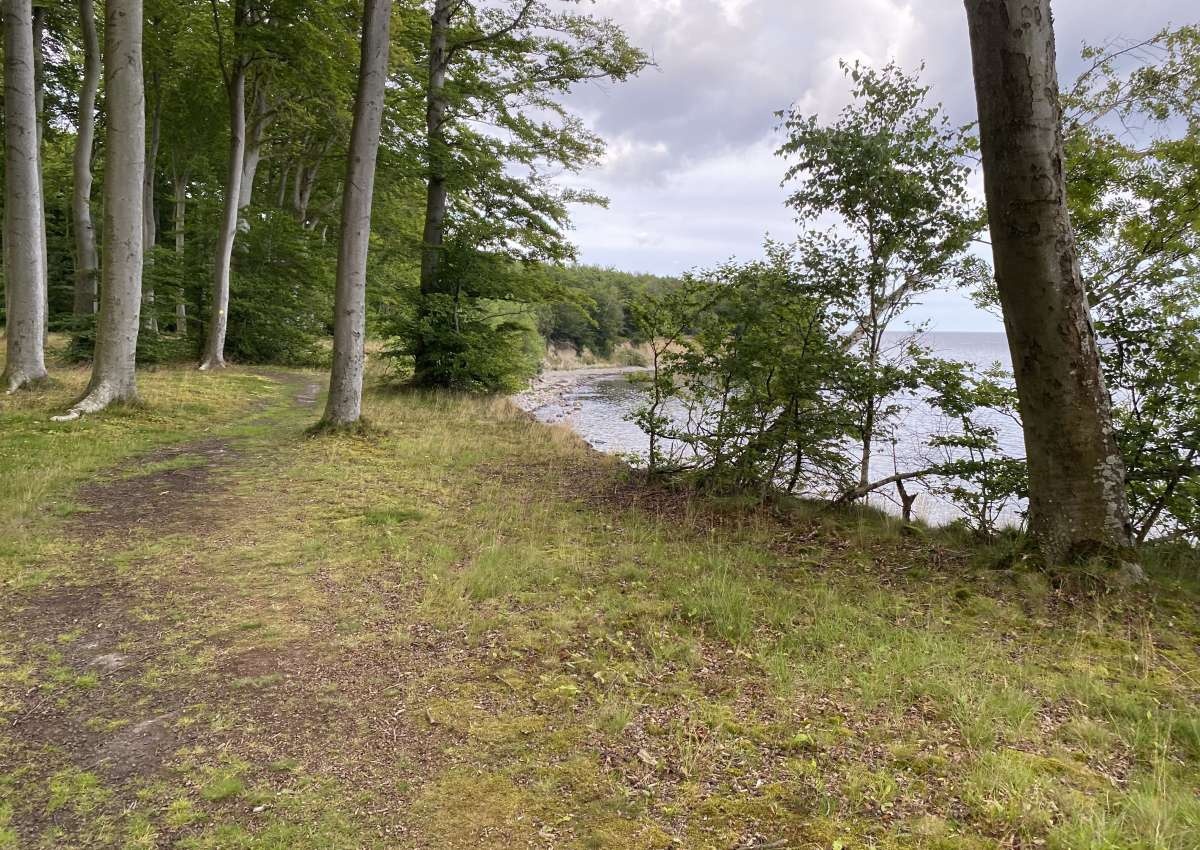 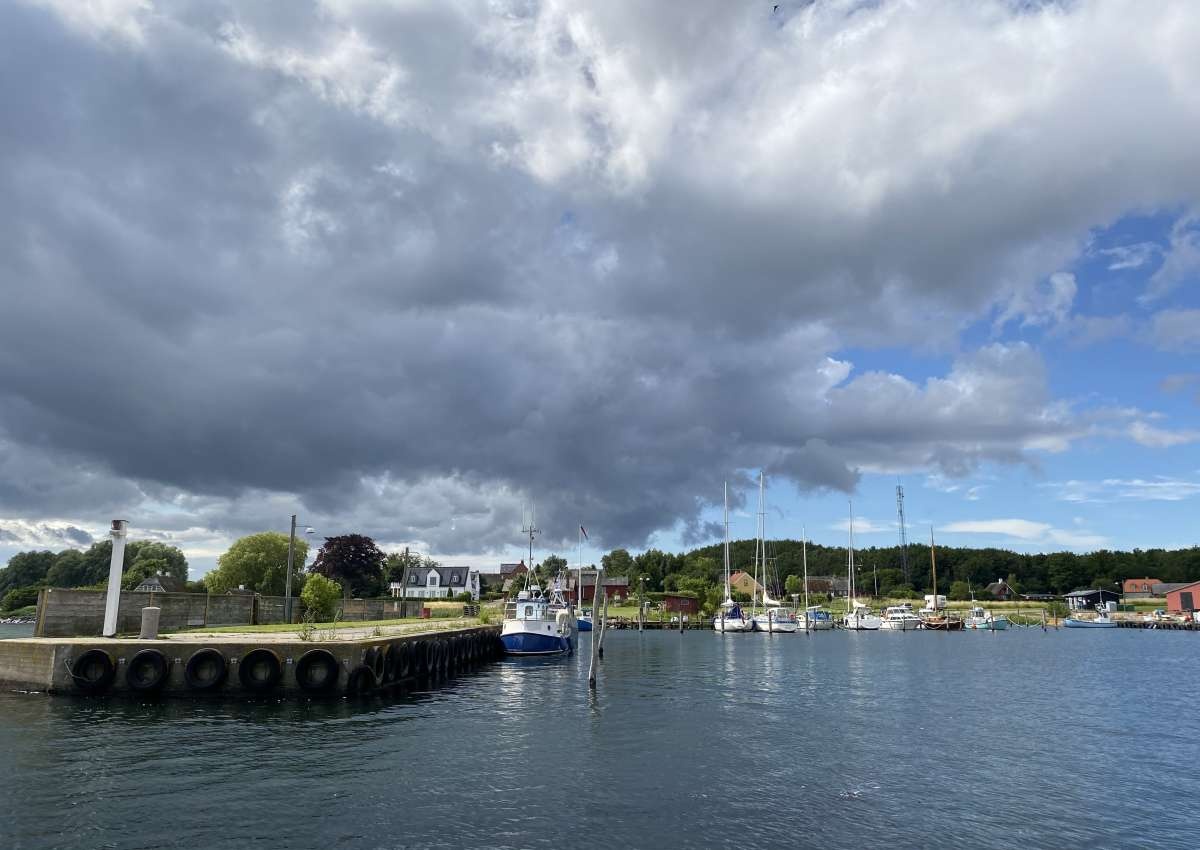 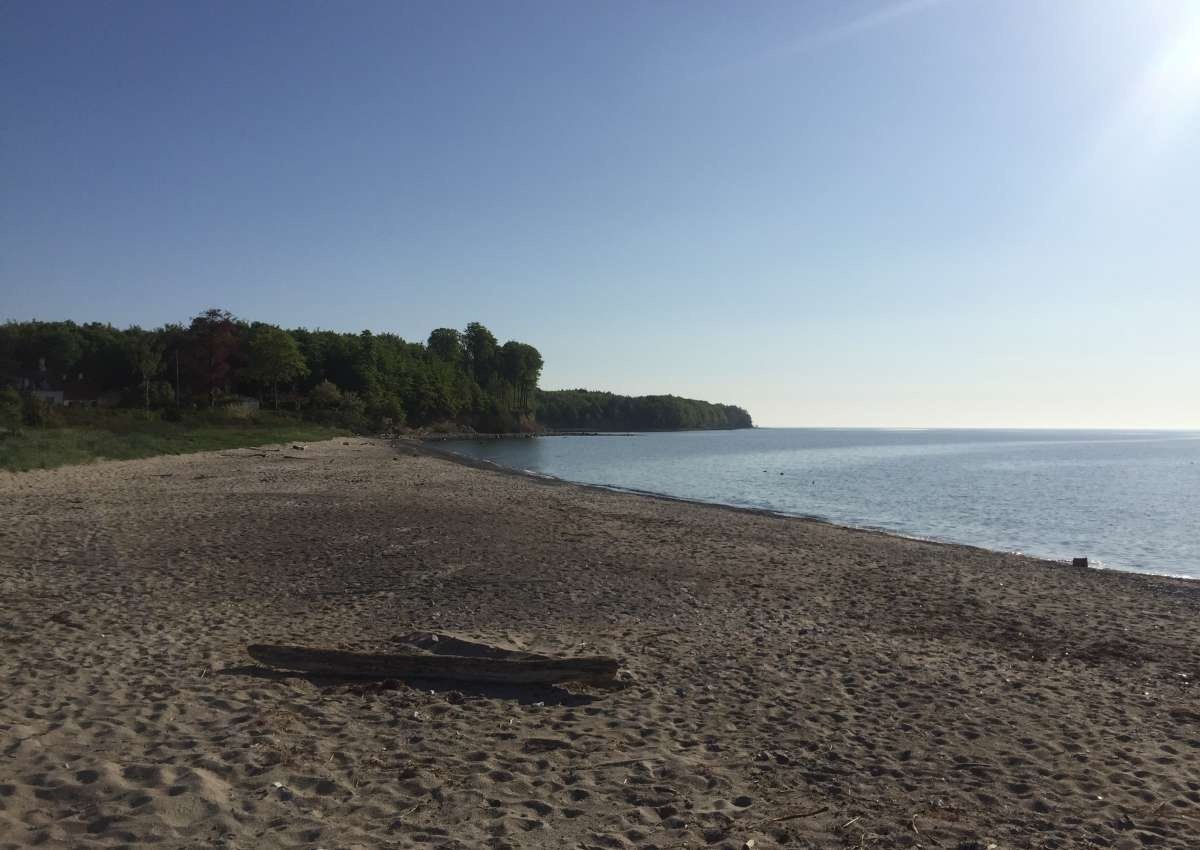 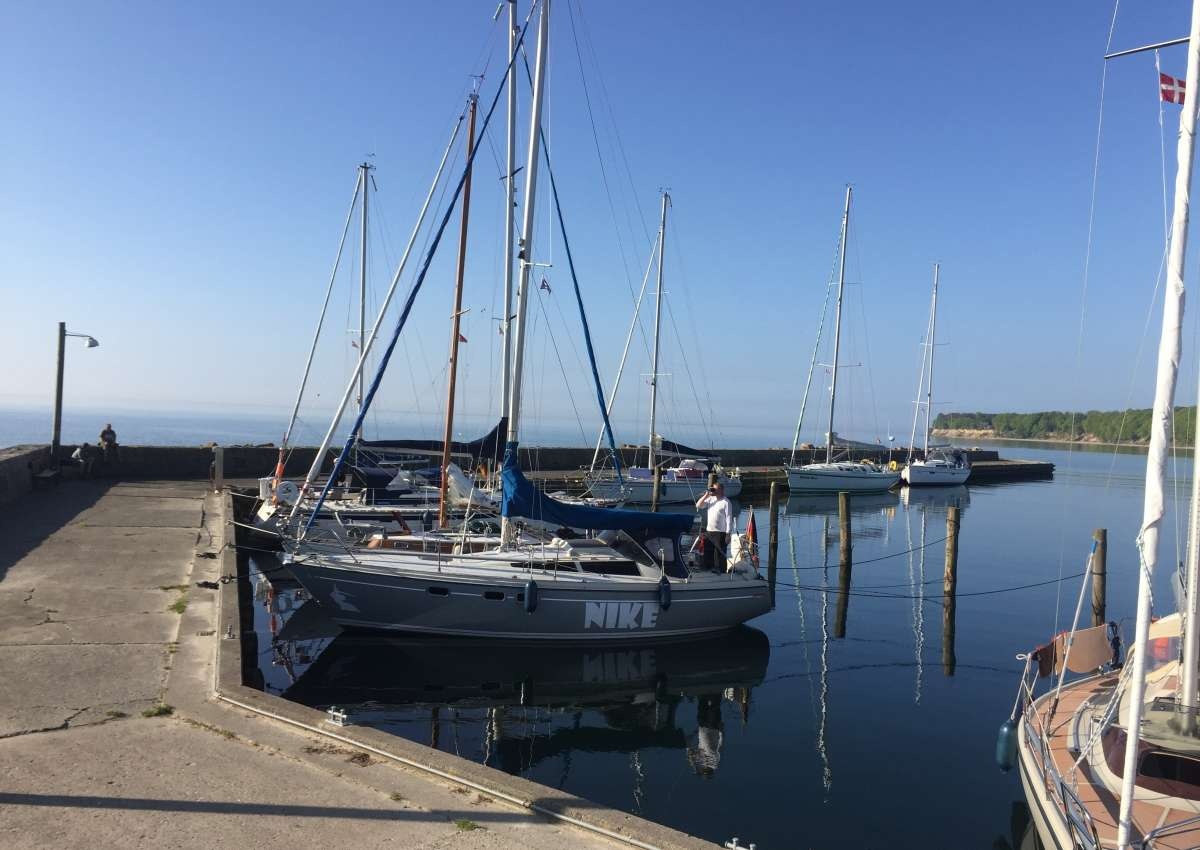 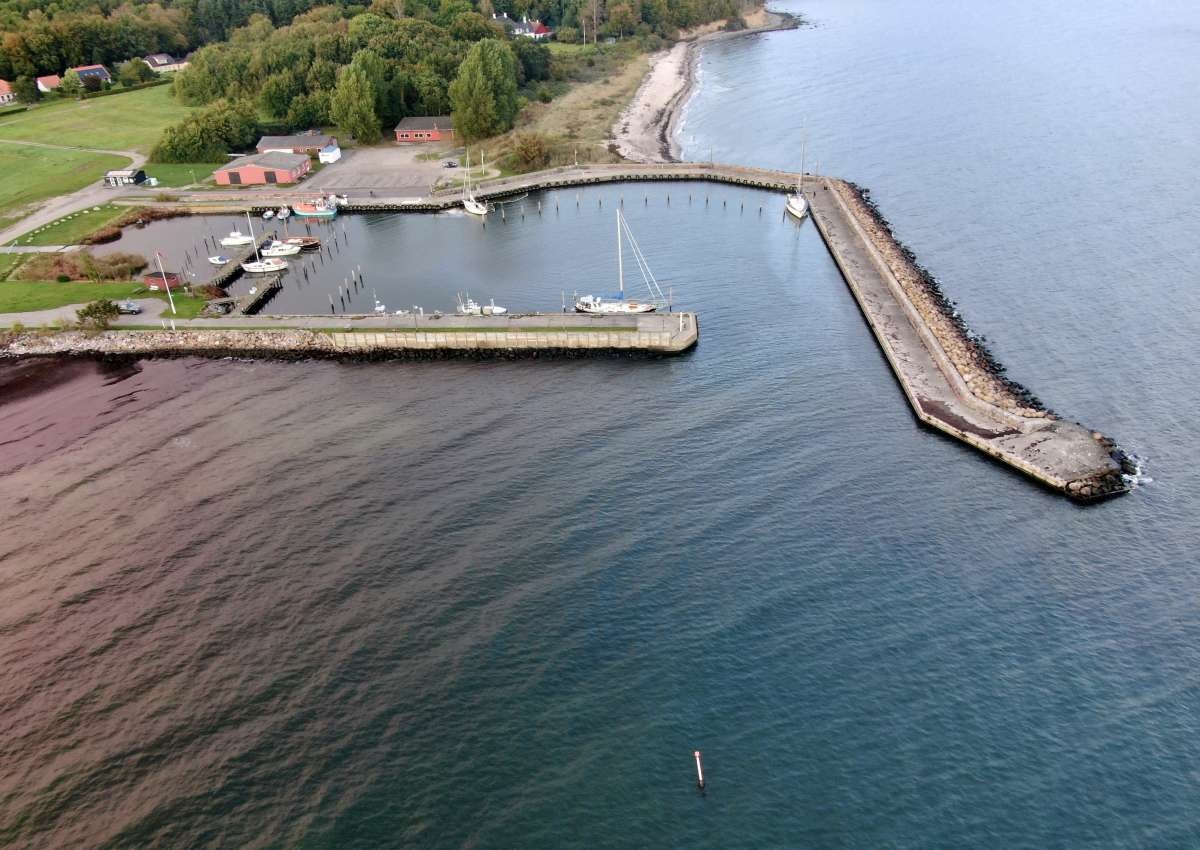 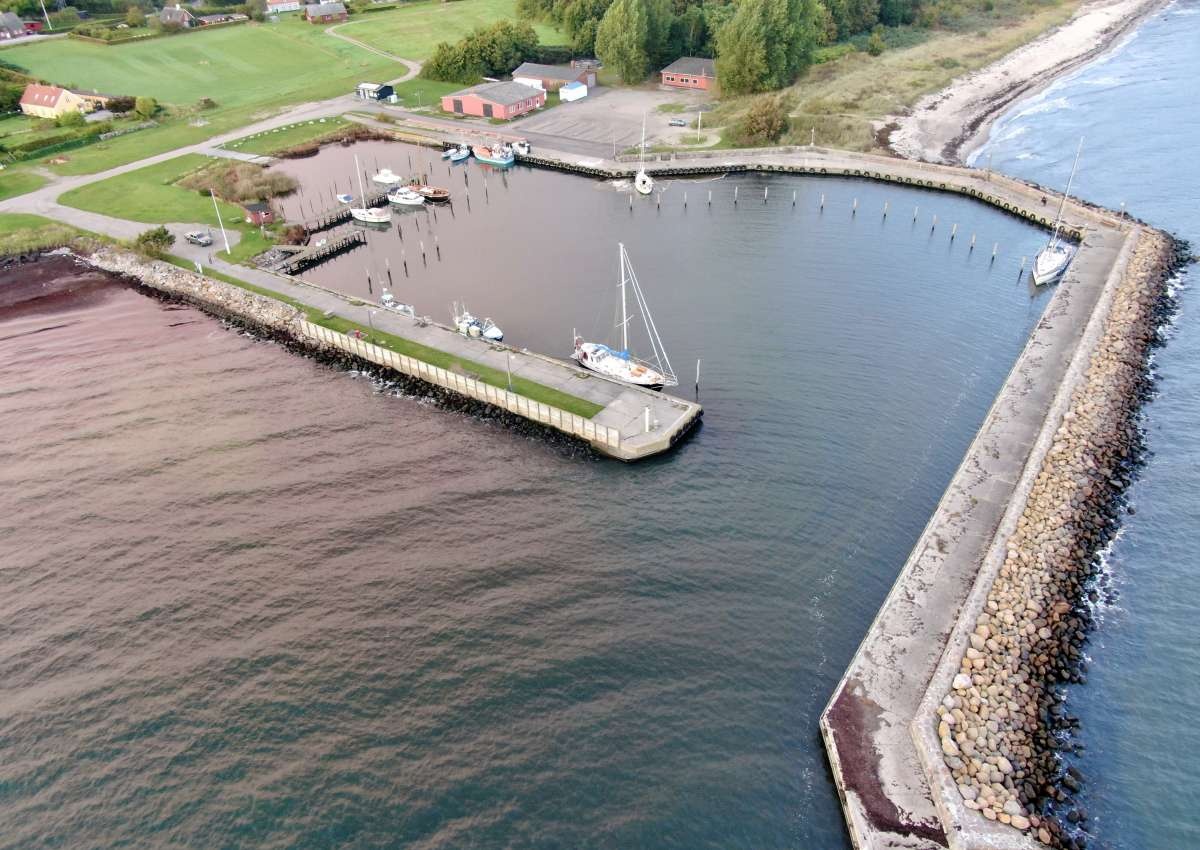 The approach to the fired harbour is possible day and night. Due to the large number of gillnets, approaching the harbour at night should be done with great caution. The largest set net is located south of the harbour at Præstebjerg Rev and extends out to sea for about 1.5sm, approximately to the unlit east buoy (WP 414). From here you steer 295° to the harbour. There are also set nets to the north of the harbour, but they do not extend as far out to sea. Partly there are passages between the nets, but these should only be used by people who know the area. The harbour entrance, which is designated during the season, tends to silting up, especially at the head of the east breakwater. The green buoy must be passed entering on starboard side.

Guests will find limited berths on the inside of the harbour piers with 2 - 2.5m water depth. The harbour is often crowded in the season.

The cosy harbour offers no supply possibilities. The beautiful beech forests near the village invite you to take long walks. Hidden in the forest is a 100 year old restaurant - Pomlenakke. This is located on a 100-metre elevation, from which you can look out over the Baltic Sea, in good weather even as far as Møn.

The sports skipper who is looking for peace and quiet in a beautiful natural environment will like it here. The few houses of the fishing harbour are surrounded by forest and a beautiful bathing beach extends south of the place up to the steep bank.

Originally the harbour was put on for the shipment of wood, only later the fishermen took over the direction. Because of the rich tree population, a sawmill was even built at this "strategically favourable" harbour, whose chimney and halls do not detract from the tranquil atmosphere of the place. Many of the 27 houses are protected against wind and cold in an extraordinary way: The walls were covered with a layer of thatch and were built immediately after the storm surge of 1872, giving the thatched buildings the impression of being made entirely of straw.

Unfortunately, there are no bicycles to rent here, as the surrounding area is made for bike tours. But hiking trips are no less recommended. For example, the forest of Korselitse, criss-crossed with hiking trails, starts right at the northern exit of the village. The cliff of the forest at the Hestehoved beacon is an ideal vantage point. On a clear day you can see across to the island of Møn. The distance from the lighthouse to the harbour of Hesnæs is about four kilometres.

The hike south along the wooded cliff is equally interesting for two reasons:

Firstly, after three kilometres the weary hiker can fortify himself in an inn right on the cliff of Pomlenakke, and secondly, about five kilometres from Hesnæs he comes across the forest "Halskov Vænge", which was a large burial ground in the Stone Age. The forest has been prepared as a small "nature museum" and contains an unusually large number of antiquities. Boards and display cases provide information about the origins of the graves, five of which date from the later Stone Age and around 70 from the Bronze Age. Some of the stones were carved during the Bronze Age with small, bowl-shaped depressions, probably fertility symbols. After the area was declared a protected monument in 1974, the underwood was cleared and sheep are now grazing there to prevent scrub from overgrowing the graves again. In a wooden house in the middle of the forest, visitors can get an information leaflet about the prehistoric sights.

The ruins of Bønned shown on the map are the remains of a castle that belonged to the knight Ulfstrand (see also Stubbekøbing). Later, King Christian IV's son established a hunting lodge here. After a fire in 1700, the castle fell into disrepair and was later demolished.