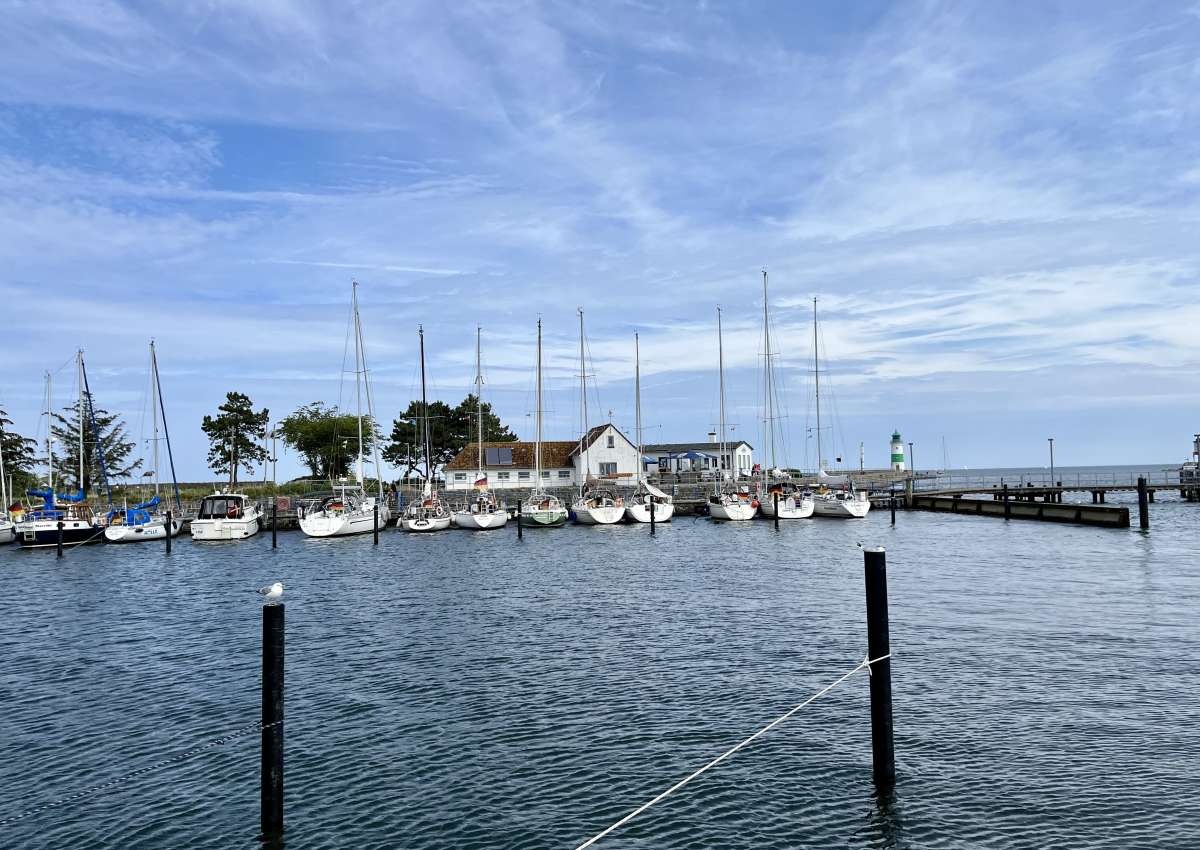 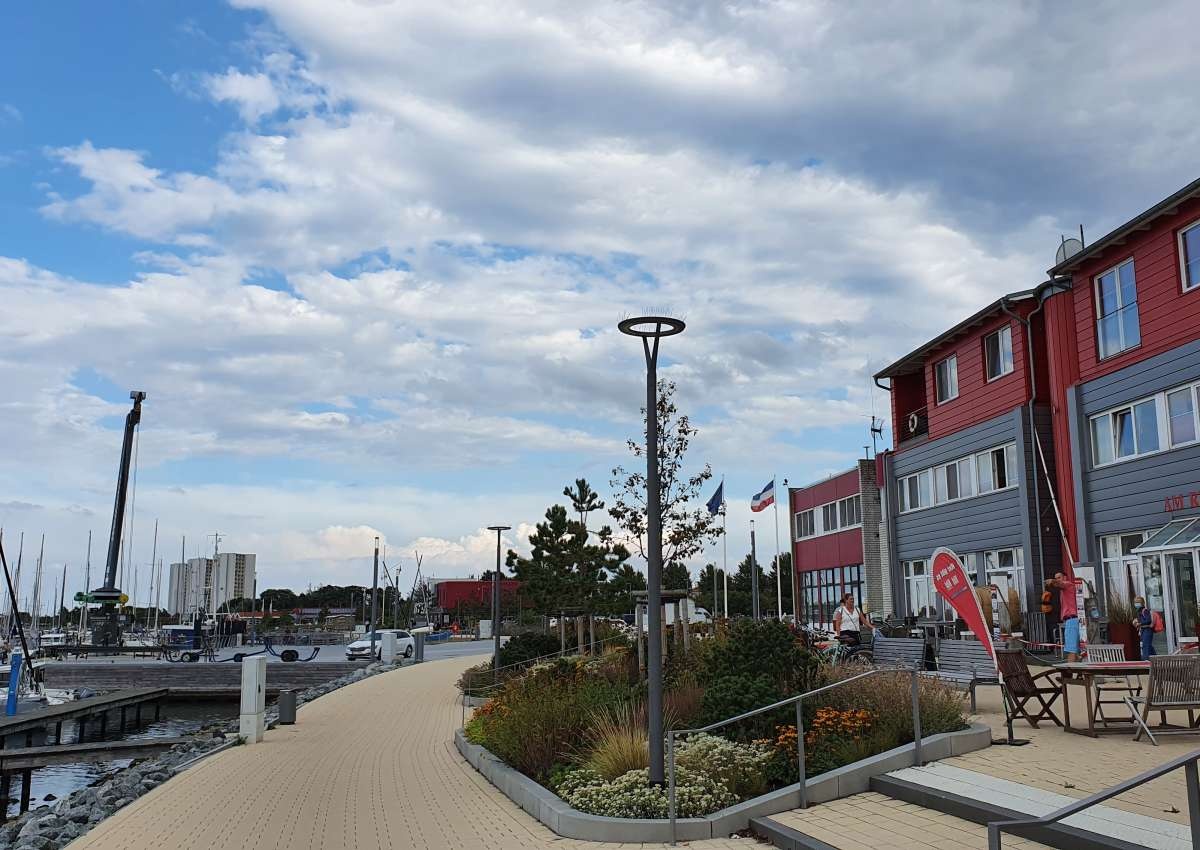 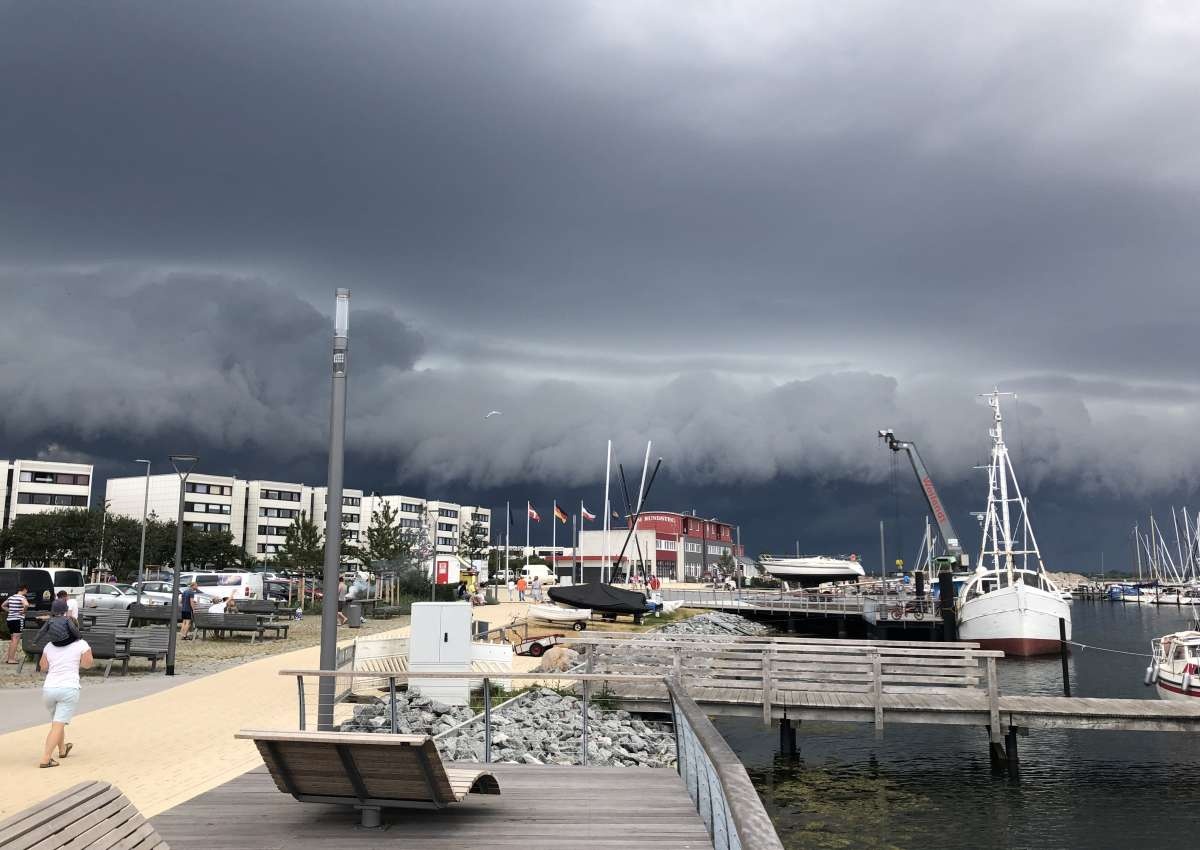 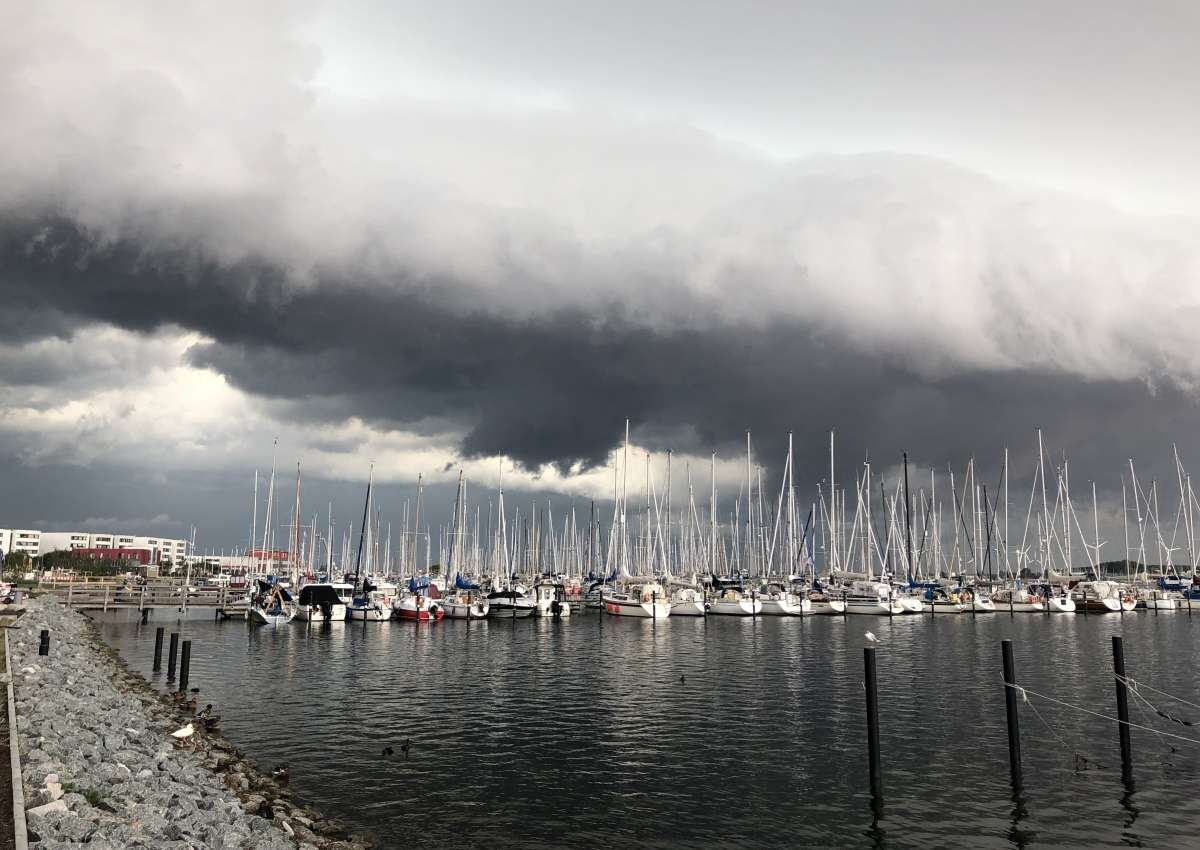 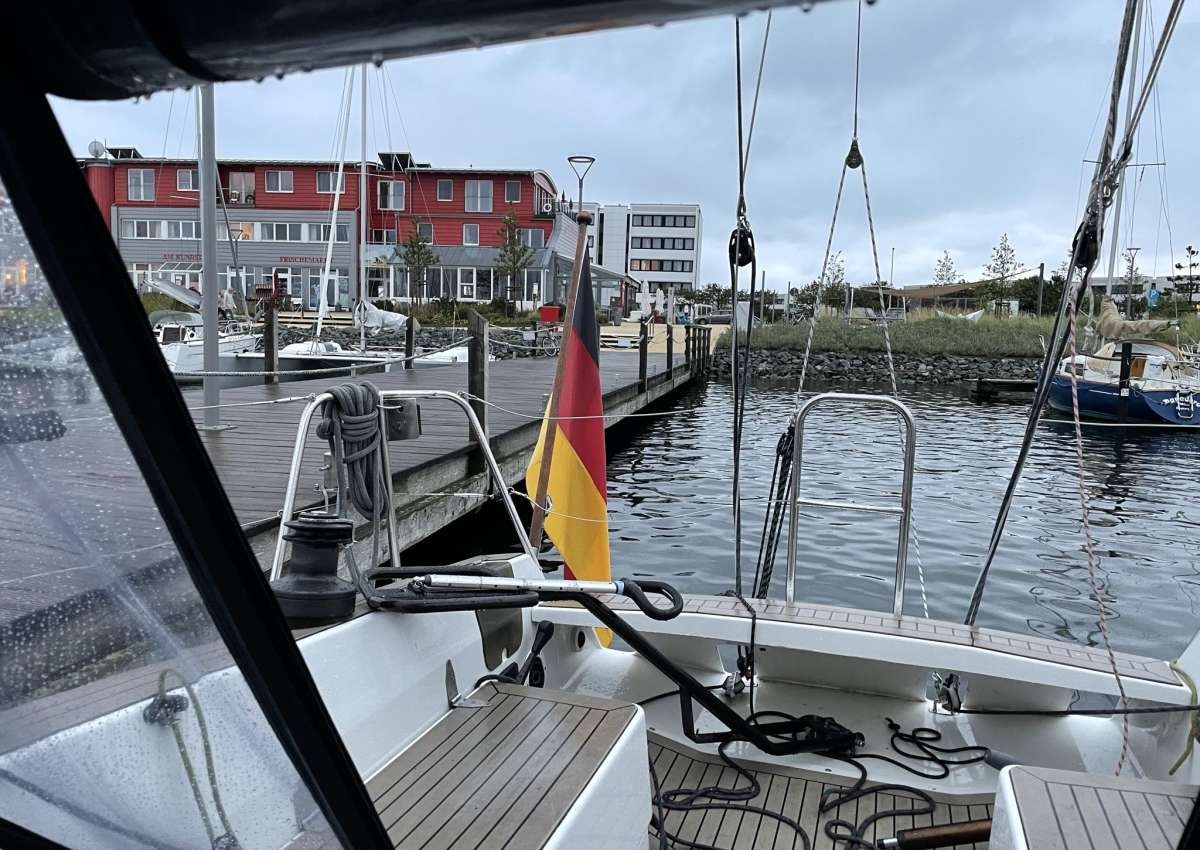 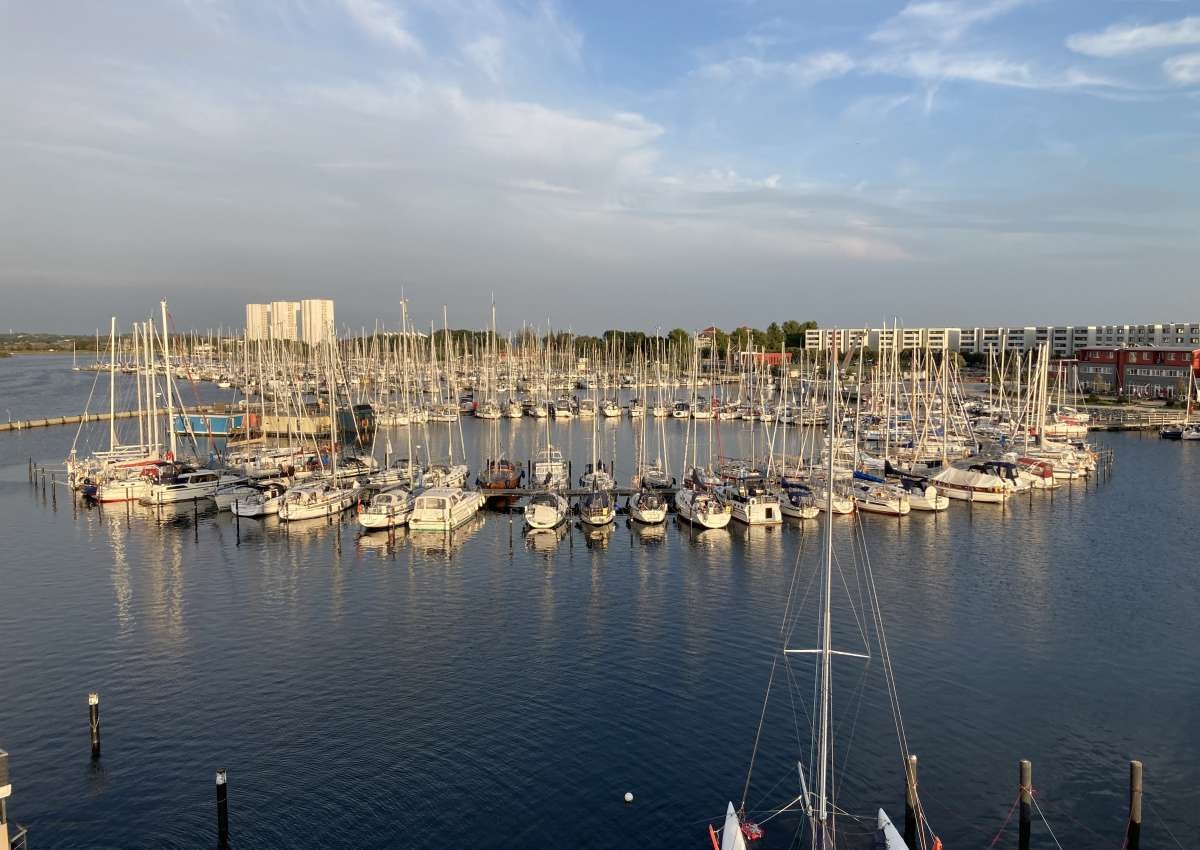 Large marina at the modern holiday centre Burgtiefe south of the Burger Binnensee.

The approach is possible day and night. Coming from the sea, the three approx. 55m high skyscrapers of Burgtiefe serve as landmarks. At night you keep clear of the shoal "Grüner Grund" in the white sector of Burgstaaken lighthouse (Oc(3)WR.12s) until the leading light (white sector 314,5° - 316,0°) is visible. The entrance between the piers tends to silt up, which should be considered especially in onshore winds with strong swells. Otherwise, the 4.5m deep, well buoyed channel is adequately marked at night with a leading and a leading light. Outside the fairway it is very shallow. The channel may only be navigated at max. 5.4kn and the minimum distance to the buoys is 5m. Overtaking manoeuvres in the dredging channel are prohibited.

The then unlit side fairway branches off at buoy 19/B1 . With a good headlight and some residual light, entering at night is also possible. However, one should not deviate from the fairway, as it is very shallow outside the channel.

Here are all the supply possibilities of a modern marina and a large holiday center given (including ship chandlers and diesel). Other good shopping facilities can be found in the village of Burg, 2.5km away.

The three-kilometre-long bathing beach on the spit off the south of Burg is the best-known beach on the island. The headland is called Burgtiefe or simply Südstrand and has developed into the actual tourist centre of Burg. High-rise buildings and all kinds of tourist facilities dominate the picture. For example, the "Kur- und Ferienzentrum Südstrand" (South Beach Spa and Holiday Centre) is located here, with an indoor seawater pool, concert hall, music terrace, open-air chess with large figures and reading rooms, as well as a book rental. The "Kurmittelhaus", the "Haus des Kurgastes", a ship chandlery at the marina with 600 berths as well as play and sports facilities make it clear that Südstrand (Burgtiefe) is dedicated to tourism. The children's events organised by the spa administration also cater for youngsters. The restaurant "Tonne 21" is located at the harbour. A savings bank, a bakery and a supermarket are also available.

The ruins of Glambeck, standing next to the modern holiday buildings and hotel towers, look like an anachronism. Built around 1250, the castle was fiercely contested in the early 1400s between the Hanseatic towns and the Danish king Erich of Pomerania. The Vitalien brothers are said to have finally conquered it for Lübeck with a trick. According to the tale, only 200 buccaneers attacked the castle at night with much fanfare, shouting at the top of their voices, "Haven't the reinforcements from Hamburg and Lübeck arrived yet?" In the darkness they then greeted the "reinforcements" with much cheering, but they did not exist. But because the modest castle force believed in a large Hanseatic army, they cleared the fortress (with a free escort). It was not until daybreak that they saw the little group before them who had surrendered. During the Thirty Years' War the castle was devastated and finally fell into decay. Its stones were used as building material. The meagre remains of the fortress were uncovered in 1908.

The headland facing the southern beach to the west is called Wulfener Hals and the northern part is a nudist beach. To the east of Burgtiefe stretches the Sahrendorfer Binnensee, which is surrounded by a marshy meadow area. The small Kohlhof Island in the Burger Binnensee northeast of the marina is a nature reserve. The excursion to the forest pavilion "Katharinenhof" is worthwhile despite the distance of six kilometres. Located northeast of the south beach directly on the east coast, the restaurant offers a beautiful view of the Baltic Sea.