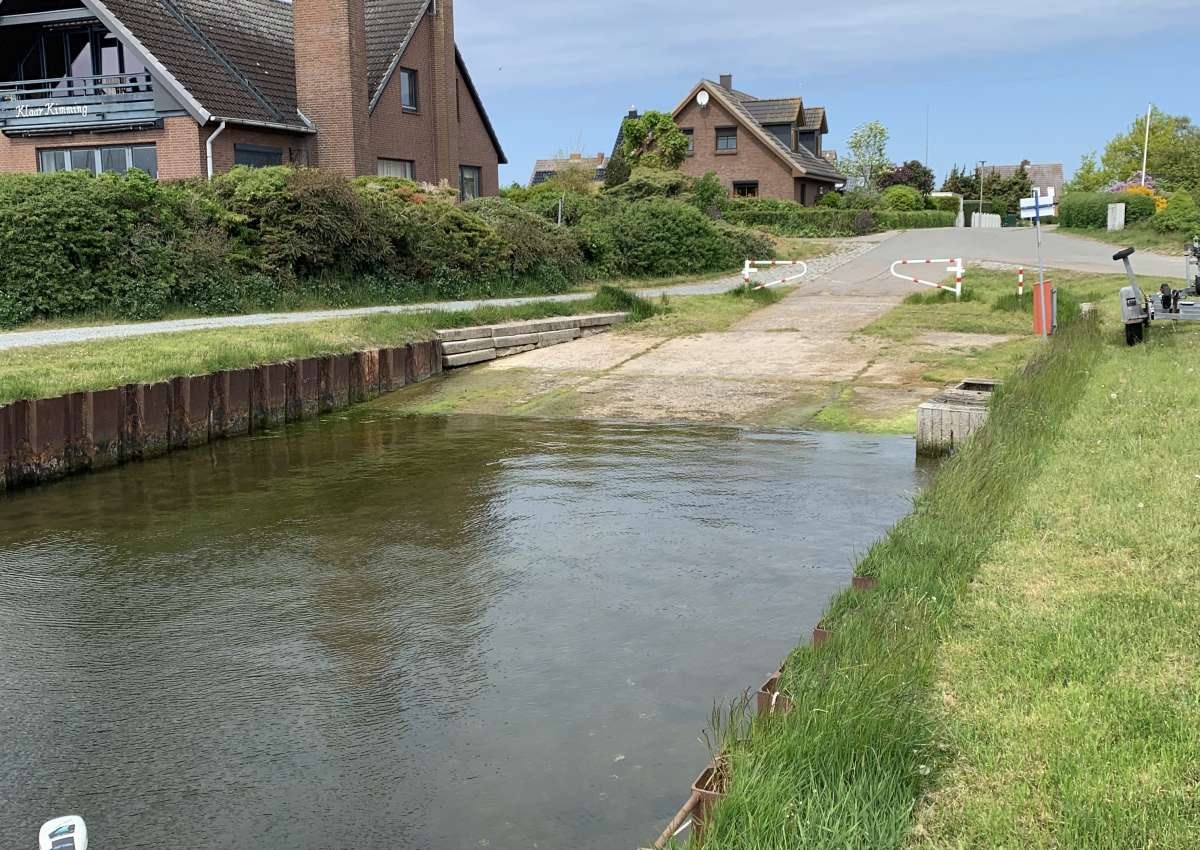 Private marina on the large inland lake of the former seaplane base, approx 3sm south of the Fehmarn Sound.

From the sea, the approach into the inland lake is difficult to make out. However, the buildings of the Pomosin plant provide a fairly good landmark. After rounding the shallow buoy Q(6)+LFl, which marks old pier remains in front of the entrance, one should keep exactly to the buoy line, as it immediately becomes very shallow next to the navigation channel.

At night, the approach should only be made with the greatest caution and with the help of a good headlamp.

Guests lie after consultation with the harbormaster

Anchorage: The inland lake is a sheltered place. The anchoring ground is very weedy in places, it is best to lie in the southern part of the lake.

Caution: In the season there is an area marked with yellow balls for water skiing here.

Except for a yacht chandlery, there are no utilities. The harbour master has the keys for the sanitary facilities. A speed limit of 10 km/h applies on the inland lake.

Sometimes it lies right in the middle of the harbour entrance, sometimes in front of or occasionally behind the pier. There is talk of the wandering "ghost stone" of Großenbrode. What the Scots have their Nessie in Loch Ness, the people of Großenbrode have their stone in the lake. Nobody can say exactly where it is, which is why it is pointless to avoid it. So it's best to close your eyes and walk through it, or rather over it. Joking aside, there has never been a stone in the harbour entrance at a depth of about 1.8 metres. It merely haunts the nautical literature and the minds of some pleasure boaters. On the other hand, one must be careful of the sunken breakwater at the entrance to the lake.

For information: pectin is a gelling agent and imulgator used in the food, cosmetics and adhesives industries. For those who lie in the Großenbroder Binnensee will probably ask themselves the question, what is probably produced in the plant east of the harbor. The gelling agent is obtained from pome fruit. Fallen fruit from all over Europe is transported to Großenbrode to be used, for example, as a gelling agent for jam. The site and the halls served a less peaceful purpose during the Second World War. Großenbrode was an air base for seaplanes of the Wehrmacht. After the war, the present marina was used by East Prussian fishermen.

A little further from the harbour, to the north of the lake, stand the gradually decaying quays of the former Großenbrode - Gedser ferry service. The construction of the Fehmarnsund Bridge and the ferry port of Puttgarden made this connection superfluous. The former ferry station housed the naval coastal service school. Today, the Klemens shipyard uses the site for its marina.

At the adjacent harbours of Marina Großenbrode (formerly Dehler shipyard) and Yachtclub Großenbrode, things are tranquil. There are only a few buildings at the harbour. It is about a 20-minute walk to the village of Großenbrode to the north, where an old church with a wooden bell tower forms the centre of the village. The stained glass windows of the church, which was first mentioned in 1249, are worthy of note.

You can stock up on provisions at the supermarket at the entrance to the village, and you will also find a bakery, pharmacy, savings bank, fish shop, doctor and several restaurants. Propane gas is available at the campsite. You can also get a freshly tapped beer at the marina's snack bar and the harbour master of the yacht club will bring bread rolls in the morning if you wish.

When you moor at the yacht club, bicycles are available there free of charge. The mooring fee includes drinking water on the bridges, electricity, hot showers, internet access, use of the clubhouse with kitchen and use of the very good barbecue area.

After the DGzRS cruiser JOHN T. ESSBERGER was decommissioned, the BREMEN has been moored in Großenbrode since 2011.