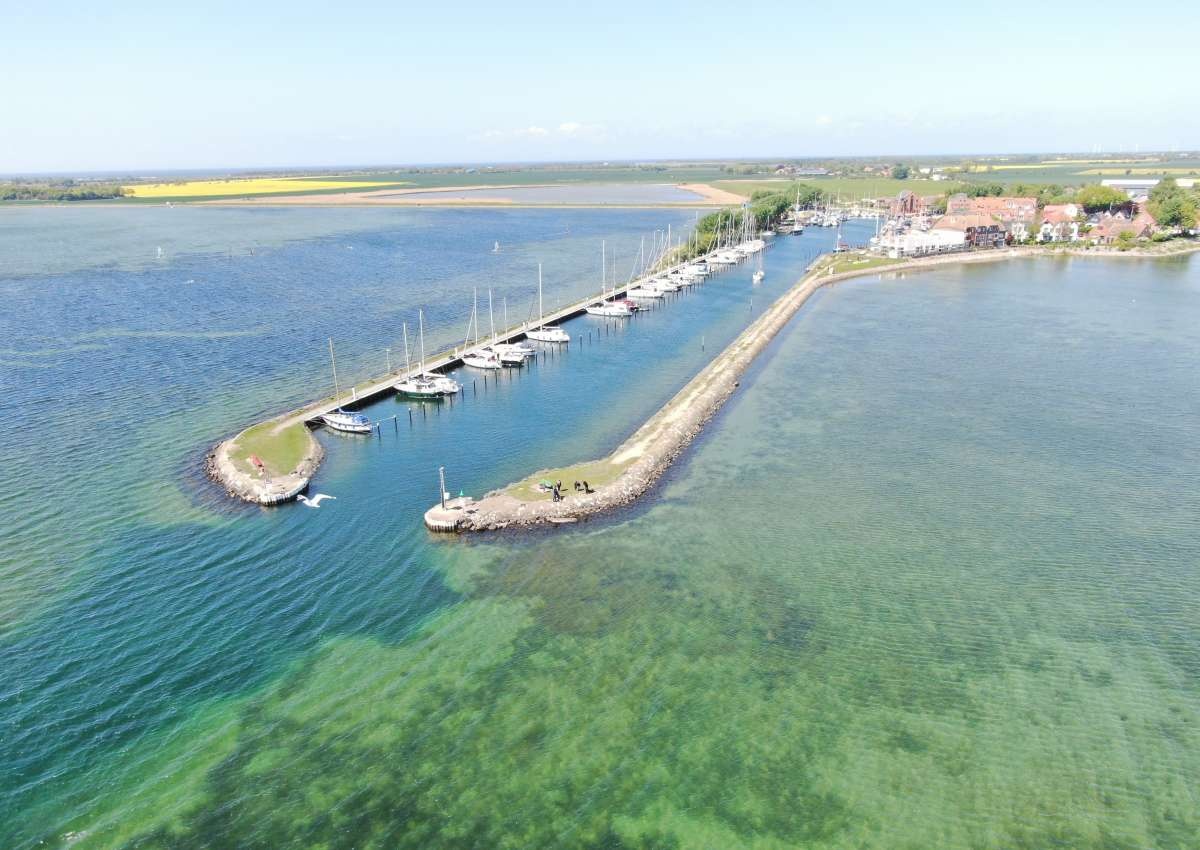 Small idyllic yacht and commercial harbour on the northwest shore of Orth Bay.

The approach to the fired harbour is unproblematic day and night. You keep 349° in the white sector of the fire, which passes through the buoyed 3m deep dredging channel. Shoals of less than 1m reach close to the channel, which is only 15m wide and tends to silt up. The set nets in the western part of Orth Bay are close to the fairway.

In the entrance there is a risk of silting, so that water depths of 2.1 - 2.8m between the piers must be expected. Sufficient distance must be kept from the east pier.

Guests will find their berths on the west pier (with stern pilings). Larger yachts are also moored at the Handelskai. But if you want to moor at the Handelskai, you should make arrangements with the harbour master.

Some utilities are available in the small cozy town.

Once a loading point for the agricultural goods of the fertile island, the tube-like harbour is now used exclusively by pleasure craft. The cosy village at the semicircular Orther Reede is a suitable starting point for excursions to the nature reserves of Westfehmarn.

The nature reserve and the inland lake Sulsdorfer Wiek (see map) are located immediately northwest of the village. From the dike path south of it, the shallow lake can be overlooked. Further west the dike leads to the lighthouse Flügge and the nature reserve Krumm Steert. The lighthouse was built in 1915 and is with 42,5 metres the biggest on the island. Its fire reaches 28 nautical miles.

The special thing about the Krumm Steert headland to the south-east of the tower is that it grows in length by a few metres every year. From 1879 to 1983 it was 900 metres, closing the bay more and more.

In Fehmarn, water and wind have always worked particularly hard to change the land and coast. Seepage and easterly storms, for example, have broken off and washed away the cliff coast to the east. Currents and winds straightened the once bay-rich north and west coasts and caused inland lakes to form. This is how the Wallnau Waterfowl Reserve, which is well worth seeing, came into being. The breeding ground for 60 bird species is located a good three kilometres northwest of Orth on the west coast dike (see map). It consists of six larger and about 30 smaller ponds as well as marshes and shallow meadows. A bird care station, an information centre and a nature trail are located in the northwest of the nature reserve, which can be walked around on dikes, paths and roads. The beach northwest of the bird sanctuary is frequented by friends of free body culture.

By the way: 7000 years ago, Fehmarn and Lolland were separated only by a narrow inland lake; Langeland could be reached on dry feet. The ice age tied up so much water that the sea level was 60 metres below today's, at the 25-metre depth line. 3000 years before Christ the shore line in the western Baltic Sea was already identical with today's nine-metre depth line.

The name Orth has a particularly good sound among surfers. The Orther Reede is considered to be the best surfing spot in Germany with south and west winds. What belongs to the surf business is offered around the harbour. If board sailing is not your thing, you might enjoy the "Seegarten" inn in the style of an old Fehmarn skipper's house. A monument on the harbour quay commemorates the time of Kaiser Wilhelm I. Petersdorf, four kilometres north of Orth, has a post office in Petersdorfer Weg and a savings bank. There are bus connections to Petersdorf and Kopendorf.