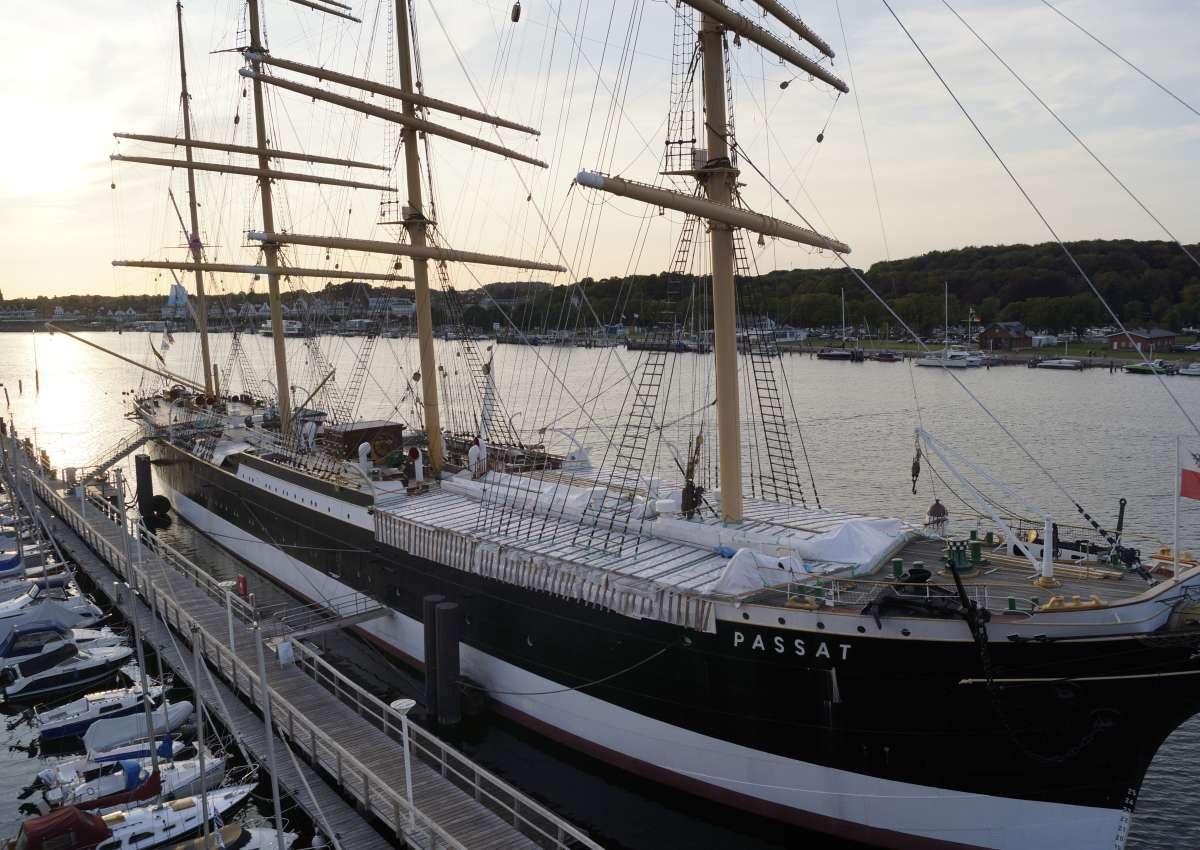 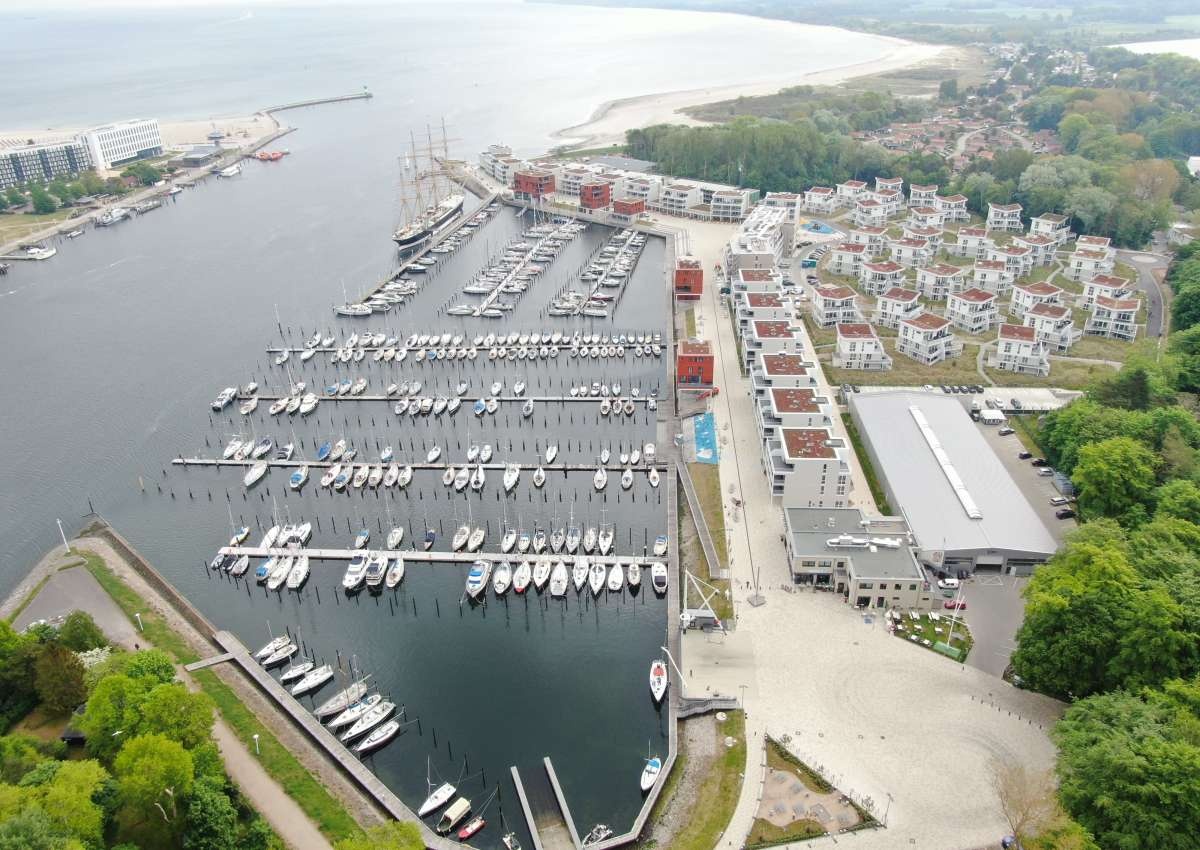 Baltic seaside resort rich in tradition and one of the great sailing centres in Germany.

The approach to the well buoyed and lit Trave estuary offers no problems day and night. Far visible is the 118 m high building of the Maritim Hotel, which also houses the Travemünde beacon. You walk towards it at night in the white sector until the pier light changes to green, then round the north pier.

Caution is advised with the large ferries, which must absolutely be given right of way.

The largely wind-dependent current in the Trave estuary rarely reaches speeds above 2 knots, but it occasionally sets against the Mecklenburg coast, which is something to be aware of, especially in poor visibility.

For guests there are many different mooring possibilities near the city on both sides of the Trave.

With its spa promenade, the seaside resort, which is somewhat fashionable in places, offers good supply facilities on both sides of the Trave. Bunker stations, yacht outfitters, sailmakers and the services of the Böbs shipyard and Marina Baltica.

There are 2 fast ferry connections between the Priwall peninsula and the centre of Travemünde.

For centuries, the influential Lübeck merchants had ensured that no port was built in Travemünde. In 1329 they bought the place without further ado, which suited them well as a fortress in the Lübeck defence concept. In practice, this meant that the people of Travemünde were always the first to take the rap when war broke out. Only the fishermen and pilots living in the vicinity of the fortress town earned their living from and with seafaring. They often lightened fully loaded ships because a large sandbank off the mouth of the Trave (the Plate) did not allow much draught. Travemünde did not become a port town until steam navigation took off in the 1920s.

In 1828, the English paddle steamer George V opened the first shipping line for passengers. It connected Lübeck and Petersburg. As the English line flourished, Lübeck merchants also became involved in passenger shipping and founded the Lübeck-Petersburg Steamship Company, in which the Tsar of Russia also invested. The passenger business expanded. By the middle of this century, lines to Copenhagen, Sweden and East Prussia had followed.

The heyday of ferry shipping began after the war and continues to this day. New shipbuilding techniques made it possible for Travemünde to become the largest ferry port in Europe with 17 destinations in the north over the course of 20 years. Among others, Bornholm, Gedser, Gothenburg, Copenhagen and Helsinki are called at.

Whoever goes to Travemünde should be aware that he is visiting the largest ferry port in Europe. This is not the only reason why it is so lively here. Passing merchant ships, all kinds of fish stalls, kiosks, summer events, the stream of people on the waterfront promenade and the car traffic make the hustle and bustle complete. At the same time, the other, pleasant face of the city should not be underestimated, which has earned it the reputation of the elegant Baltic seaside resort. This sophisticated part with its spa gardens and villas is to a certain extent hidden behind the all-superior Hotel Maritim. And if the promenade were not hopelessly overcrowded during the season, the picturesque row of houses at the harbour would certainly appear in a different light. The old town and the railway station, which occasionally serves as a backdrop for filming, are certainly worth a visit.

The best (over)view of the city, the jetties and the Scandinavian quay is from the roof garden on the 35th floor of the Maritim Hotel. The view has its price, but this was no obstacle for half a million visitors to the roof garden. By the way, the top of the hotel tower is also the lighthouse of Travemünde, whose 118-metre-high fire shines 15 nautical miles away. The former lighthouse in front of the hotel seems dwarfed in comparison to the Maritim. Museums are scarce in Travemünde - exceptions are the seaside resort museum near the church and the old lighthouse, which can be visited in summer. But there are various leisure facilities. And last but not least, there's Travemünde Week, the most important sailing event in Germany after Kiel Week.

Another well-known Travemünde landmark lies running in on the port side: the Passat. Built in 1911, the four-masted barque can be visited from mid-May to mid-September. She belonged to the so-called P liners of the Hamburg shipowner Laeisz, whose names all began with a P. The Passat made four voyages to Chile before 1914 to bring saltpetre to Europe. On the fifth, she was laid up in Chile because of the outbreak of war. After becoming French spoils of war, she was sold back to Germany in 1921 and eventually sailed as a training ship for the German Merchant Navy.

After the Pamir disaster, 80 sailors drowned in 1956 when her sister ship sank, Passat made one more trip across the Atlantic and came within a whisker of becoming a victim of a storm herself. She reached Lisbon with a large list. Since 1960, the ship has been the breakwater of the Travemünde marina behind it.

The Passat harbour is popular as a berth away from the tourist hustle and bustle, ferry terminals and industrial and shipyard halls, and offers a good connection to the city with the Trave ferries that run constantly.

Since February 2000, the sea rescue boat "Hans Ingwersen" has been moored at the pilot bridge.

The Passat harbour is a popular berth away from the tourist hustle and bustle, ferry terminals and industrial and shipyard halls.