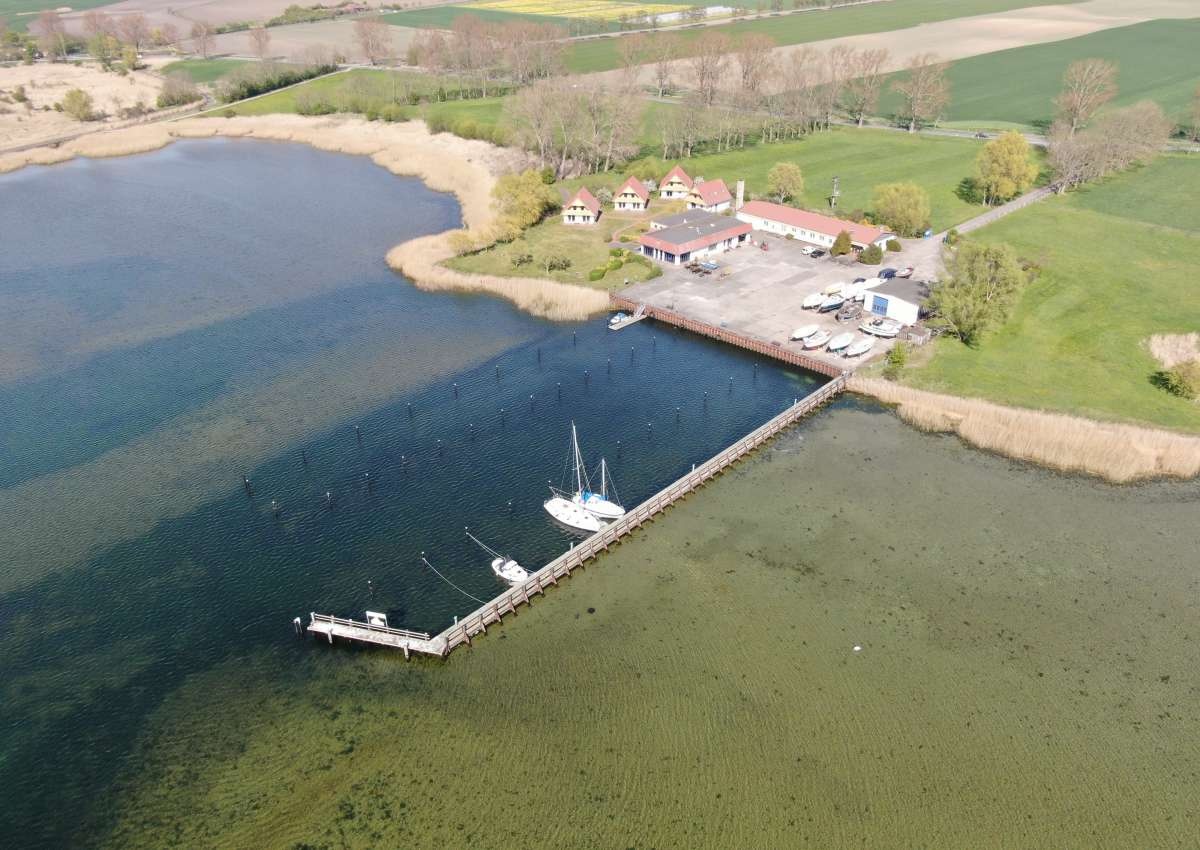 NIENDORF: Quay of the "Poeler Forellenhof" in the north of the Kirchsee, directly east of Kirchdorf on Poel.

KIRCHDORF:
The approach to Kirchdorf and Niendorf is only possible for those unfamiliar with the area during daylight hours.

From the port of Wismar or from the Bay of Wismar, the island of Walfisch and the shallow, stony northern bottom should be noted. From light buoy "1" of the Kirchdorf fairway you steer exactly north to the pair of buoys 6/5. From here you run with 6.4° in the buoyed fairway to buoy 15 of the Kirchdorf fairway. From here, steer 88° to the pier 200m east of the fairway.

Unfortunately, almost all holidaymaker traffic flows through the largest central town on the island of Poel. In addition, the passenger ships coming from Wismar dock here and for some fishing boats Kirchdorf is home port. Despite all this, the harbour is relatively quiet. The main road is far enough away and one sight stands just west of the harbour on a hill: the island church.

The massive 13th-century church gave the village and the bay (Kirchsee) its name. The church's altar is one of few surviving shrines on Germany's Baltic coast from before the Reformation. Among other things, it depicts the coronation of Mary flanked by John the Baptist and Bishop Nicholas, the patron saint of sailors. In addition, the Pole church is the only village church in Mecklenburg that is surrounded by the ramparts of a former castle.

Duke Adolf Friedrich had the fortifications, including the castle, built in 1610 in the Dutch style. The manor house, with symmetrical side wings, was surrounded by two five-metre-high ramparts, between which was a 15-metre-wide moat connected to the Baltic Sea. The duke equipped the defence system with all the refinements of the art of defence of the time, including palisades, drawbridges and portcullises. In addition, the peasants were forced to perform military service, which meant that the fortress was constantly manned by 30 men.

The remaining peasants guarded the island in shifts. Despite this, the fortress had to be surrendered to the imperial troops under Wallenstein during the 30 Years War and subsequently fell into disrepair. Only the ramparts (open-air stage) and the church with its Romanesque tower remain.

In the Peace of Westphalia, the island, like Wismar, was awarded to the Swedes after the 30 Years' War. The Swedes pledged Poel to the Mecklenburgs for 100 years in 1803, before finally returning the island in 1903.

Kirchdorf in the middle of Poel is an ideal starting point for excursions in all directions, for example to the two lighthouses in Timmendorf and Gollwitz, the early historical grave near Brandenhusen or to the 26-metre-high Kickelberg (see island map). In addition to a local history museum, the village offers several restaurants and various supply facilities such as a doctor's surgery. At the baker's at the northern end of Wismarsche Straße, a village map provides information about the facilities.

The restaurant "Hafenpavillon" serves fish dishes, among other things, and the cooks on board can get fresh fish at "Krönings Fischbaud" or from the fishermen. Fish is also the subject of the premises that can be seen to the east of the harbour, on the other side of the bay. Trout are bred here.