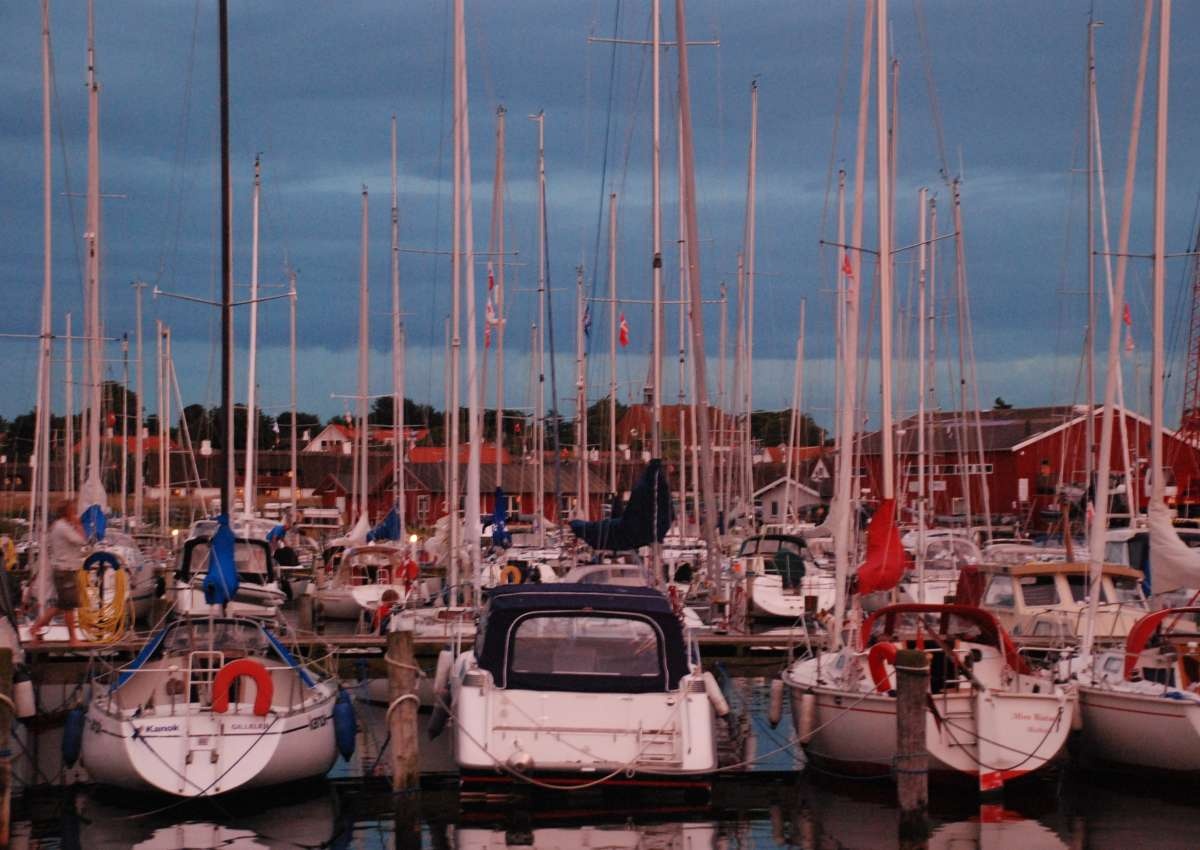 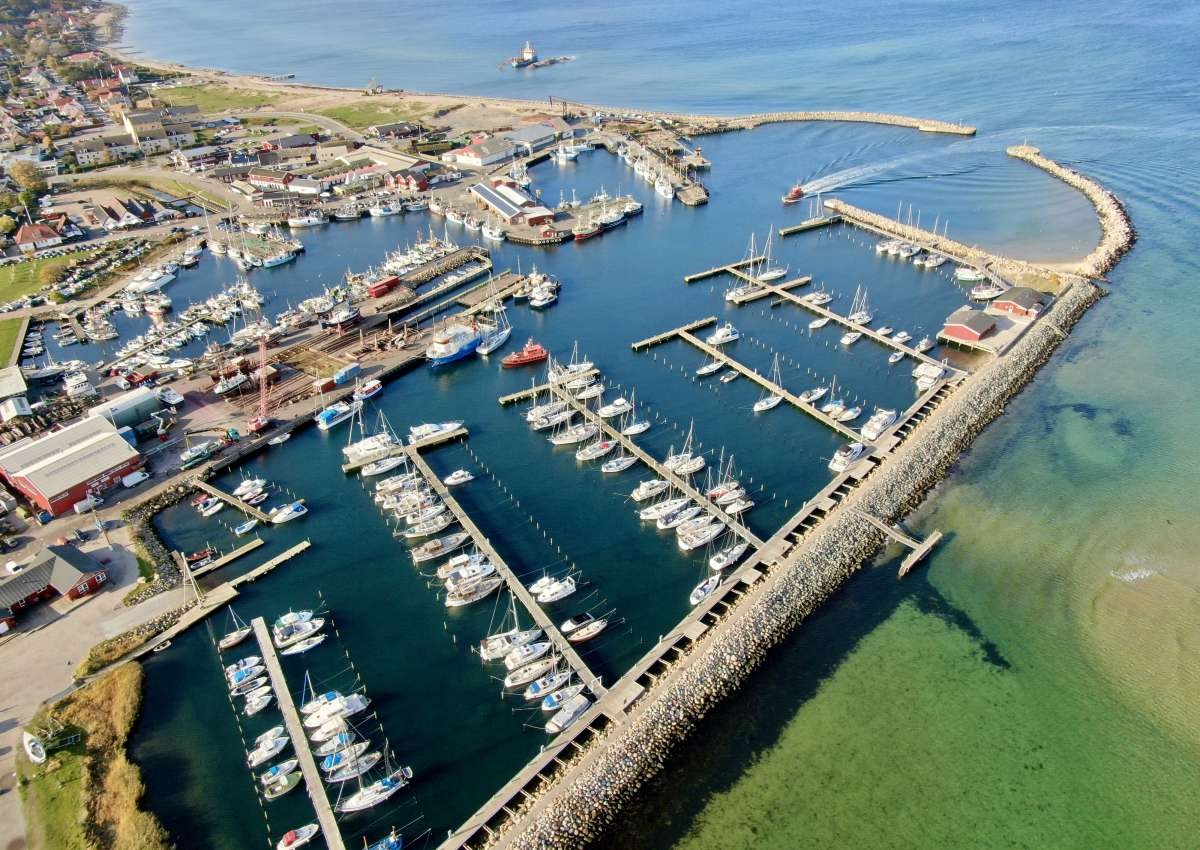 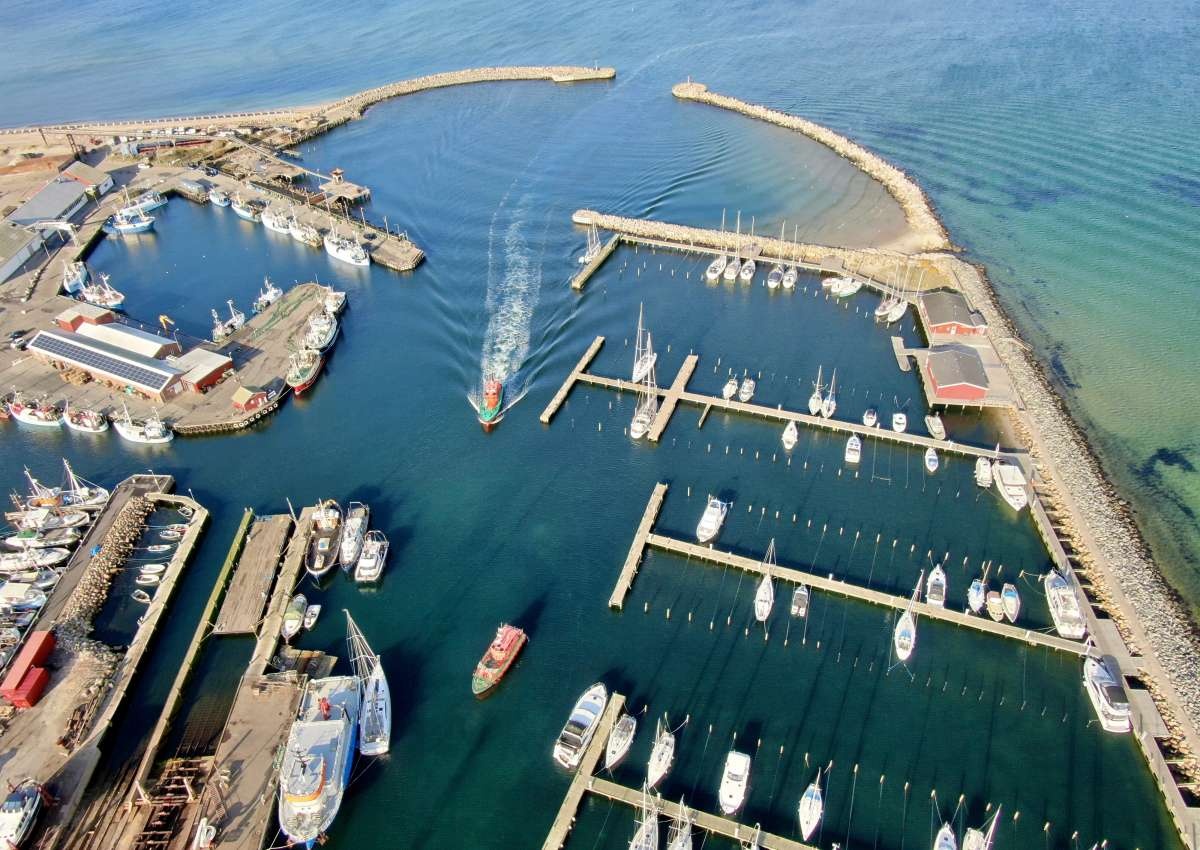 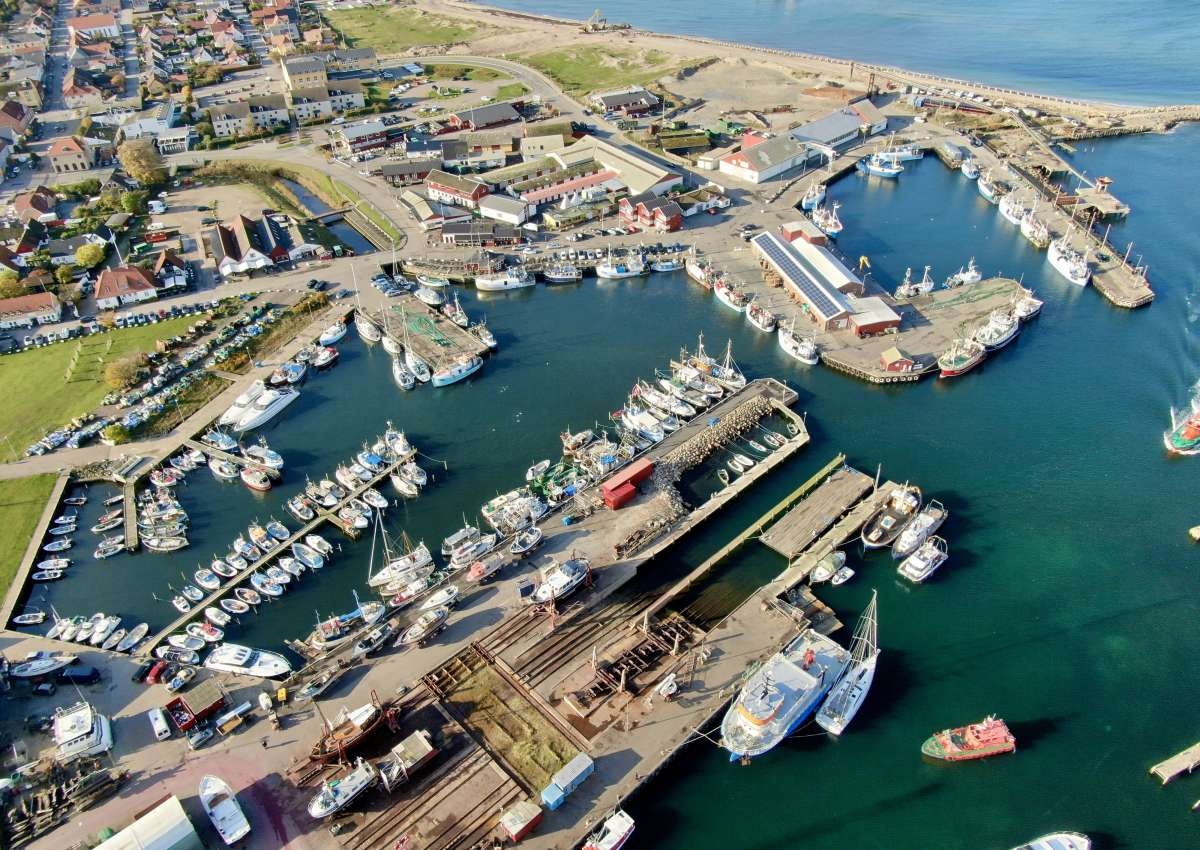 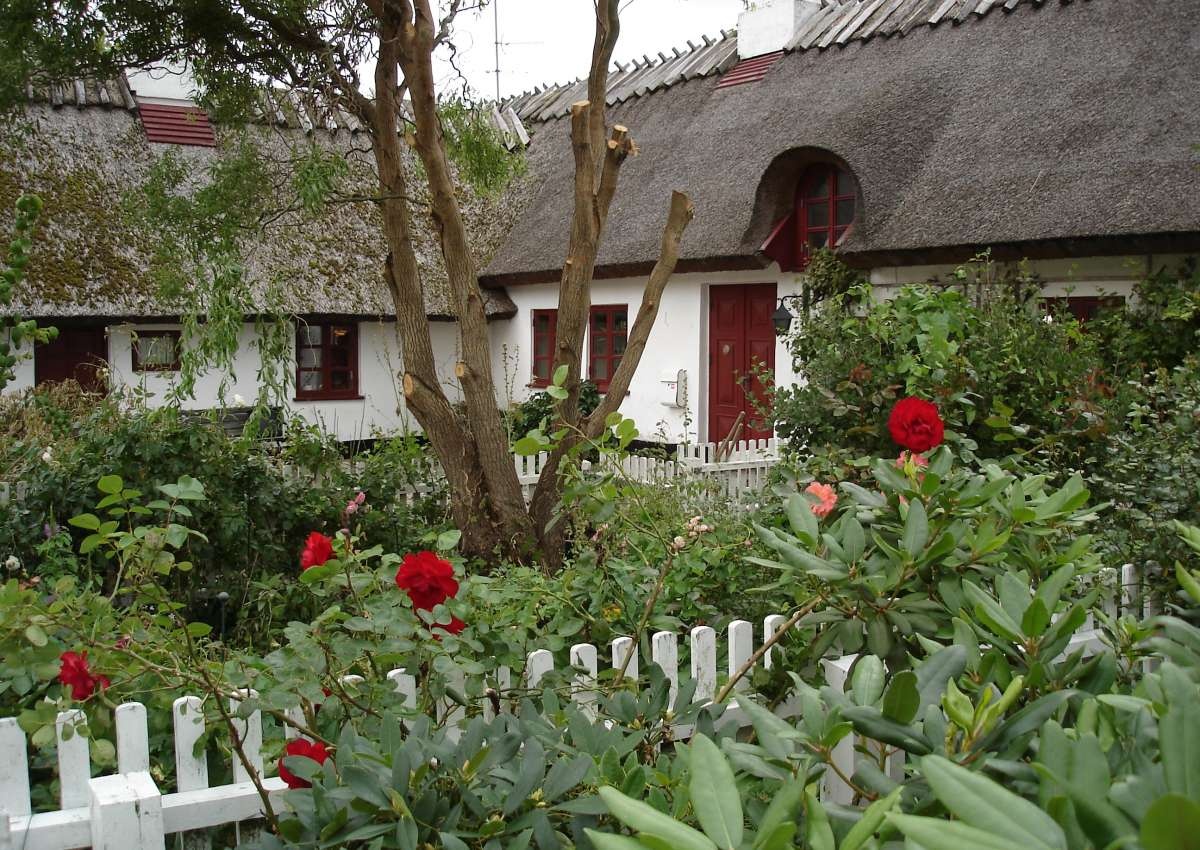 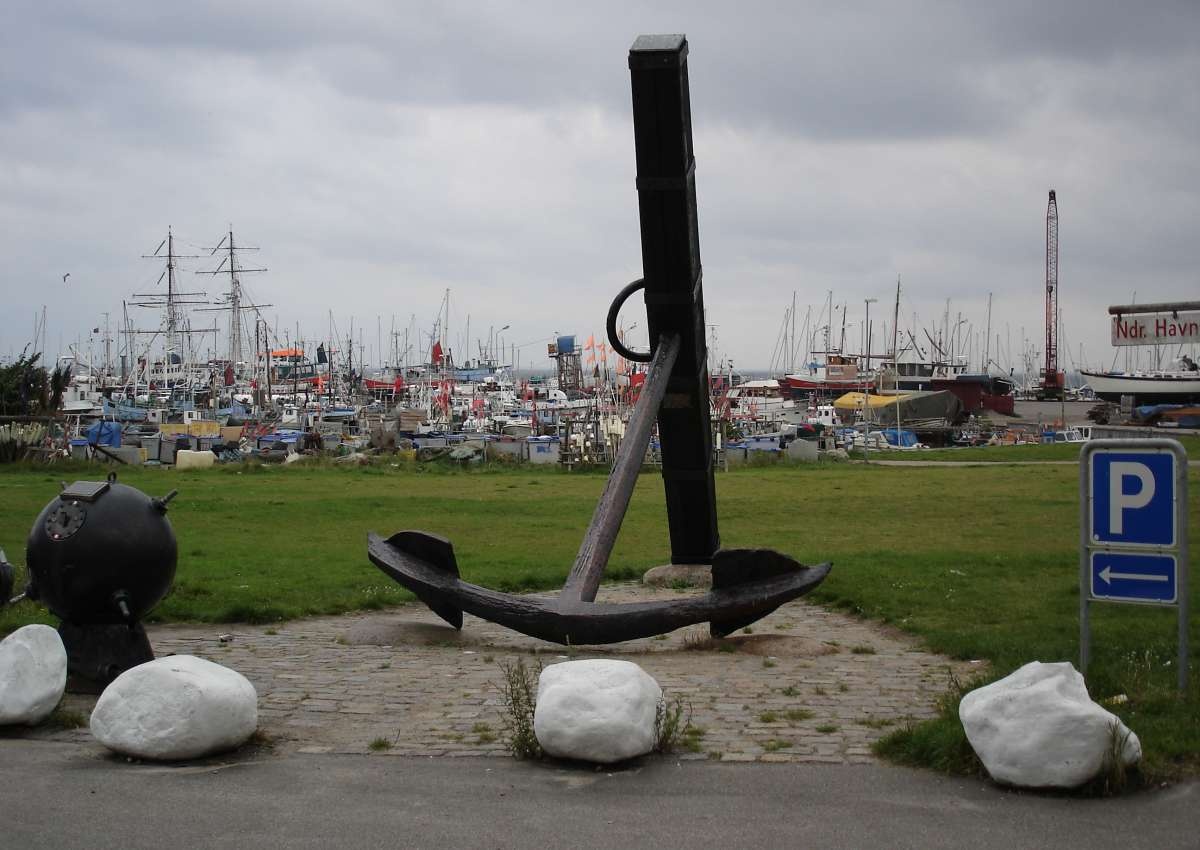 Large and lively yacht and fishing harbour on the north coast of Zealand. The harbour is very popular with sailors as a port of passage because of its convenient location.

The approach to the fired harbour is possible day and night. However, attention must be paid to the unlit buoys of the ""Gilleleje Flak"" (which has a partial water depth of only 2.5 m) and the pair of buoys north of the entrance. The entrance channel and the outer harbour with a target depth of 4 m tend to silt up, but are dredged clear again when the water depths reach approx. 3 m. The entrance channel and outer harbour are also dredged clear. Strong currents can cross in front of the entrance. During onshore storms, a heavy bottom sea stands on the offshore flax, so that an entry in heavy weather is not recommended for yachts.

At the yacht jetties in the eastern part of the harbour you can moor on stern piles in 3m water depth. During the season, the south basin is also reserved for guest yachts. Here you can sometimes be crowded with stern anchors, but thanks to the good organisation of the harbour master there are hardly any mooring problems. The quays to be kept free for fishing are marked in orange.

In addition to good sanitary facilities, this important fishing port has a very good repair service. In addition to the shipyard, you will also find an engine workshop as well as a locksmith's shop, a ship's electrical shop and a bunker station. Otherwise, there are good shopping facilities in the village and excellent fish shops directly at the harbour.

The special touch of Gilleleje: fishermen's equipment is lying around everywhere on the harbour aprons. Anchors, nets, ropes, tar barrels and many more things form a seemingly unmanageable tangle of items that probably only the fishermen themselves can keep track of. The small harbour master's office is literally lost in all the confusion. Against the yachtsmen one defends his harbour terrain particularly tenaciously and has painted the own quays with a strong orange colour. But this could also be self-defence, as Gilleleje is particularly popular with yachtsmen and berths are in extremely short supply in the high season.

The reason for its popularity is to be found in the old fishing settlements around the harbour, mainly to the east of the Søborg Canal, where old Gilleleje lies. Only the old tavern was located as an outpost beyond the former bridge, where Vesterbrogade stretches today. The fishermen's houses are mostly whitewashed, thatched, low half-timbered buildings. "Skipperhuset" is the name of one of the oldest, built in 1840 in the "Stor Strandstrade". The also old "Det gamle Fiskerhus" near the church, in Hovedgaden 49, belongs to the museum association of Gilleleje and is furnished as a typical dwelling of a fishing family in 1820. Adjacent to the old fisherman's house, which is well worth seeing, is the new ship's hall, where information is provided in words and pictures about the town's maritime past, and a boat from 1888 equipped for deep-sea fishing is on display.

Prehistoric and medieval items are on display in the old schoolhouse, at Rostgaardsvej 2, a short distance southeast of the old fisherman's house. Of course, there is also a classroom from 1900.

The museum tells us that the fishing village of Gilleleje was founded around 1500 and that with 70 houses it was already one of the largest fishing villages in Zealand 100 years later. Herring and cod were then, as now, the main source of income for the fishermen. But around 1600, the sand fly set in and threatened to bury the flourishing settlement beneath it. The fishermen successfully defended themselves by initially doing nothing but digging their way out. However, they had to watch the silting up of their harbour helplessly until they succeeded in getting money for the construction of a west pier in Copenhagen in 1902. But it is only since the construction of the east breakwater in 1925 that they have had secure moorings.

Posh and simple restaurants have established themselves in some of the old fishermen's cottages. They live off the tourists who come here in large numbers from Copenhagen. The restaurant "Karen and Marie" and the exquisite eatery "Gilleieje Havn" at the harbour are among them, as well as the "GilleIeje Café" west of the harbour, the "Kabyssen" in Kanalvej at the harbour and the "Skipperkroen" in Hovedgade near the tourist information. Those who prefer to rely on their own cooking skills can stock up on fresh seafood delicacies in one of the two fish shops or at the smokehouse by the fishing basin and then spend the money saved in this way at the "Kanalkroen Discothek".

Because the North Sea coast and Øresund were dangerous waters, two lighthouses were built to the east of the town in 1772. In 1898 the operation of the more eastern lighthouse was stopped and the second lighthouse of Nakkehoved was raised. Along the steep bank you can walk there from the harbour (2.5 kilometres) and enjoy the view of the Øresund with the Swedish Kullens cliffs and the harbour of GilleIeje 60 metres above sea level. The Nakkehoved East lighthouse, still in its 1800's condition, is the only one of its kind in the world. Both lighthouses can be visited. Strandallee, Østergade and Fyrstien (Stien=path) lead there.

If you have a little more time than just one day, you should make a detour to the castle ruins on the drained Søborg Lake (four kilometres south of the harbour). The Søborg Canal was dug between the lake and the Kattegat to create farmland (1872-1896). A footpath leads along the canal to the lake.

The castle complex with octagonal fieldstone tower dates from the 12th century. Bishop Eskil of Lund had the castle, later used as a state prison under Waldemar the Great, built. It is believed that the Hanseatic League largely destroyed it in 1530.

Also worth a trip is Gilbjerghoved, the northernmost point on the island of Zealand and a unique natural area on the steep shore just west of Gilleleje. The Gilbjergstien leads there as an extension of the Vesterbrogade.

The fishing village can be recommended as a travel stop almost without reservation: Its only shortcoming is the large number of tourists who frequent Gilleleje in the summer. Many come by the old steam train, which runs between Gilleleje and Helsingør from June to September.

The fishing village can be recommended as a travel stop almost without reservation.