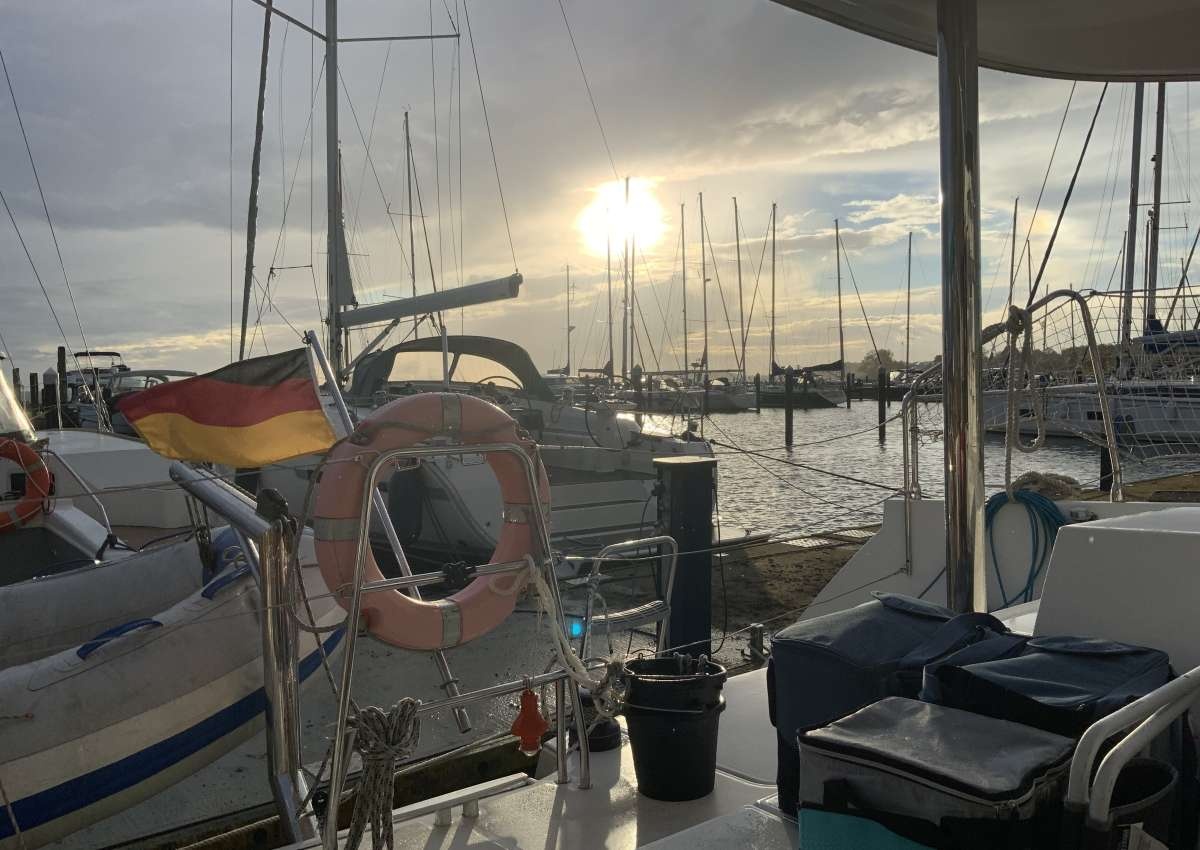 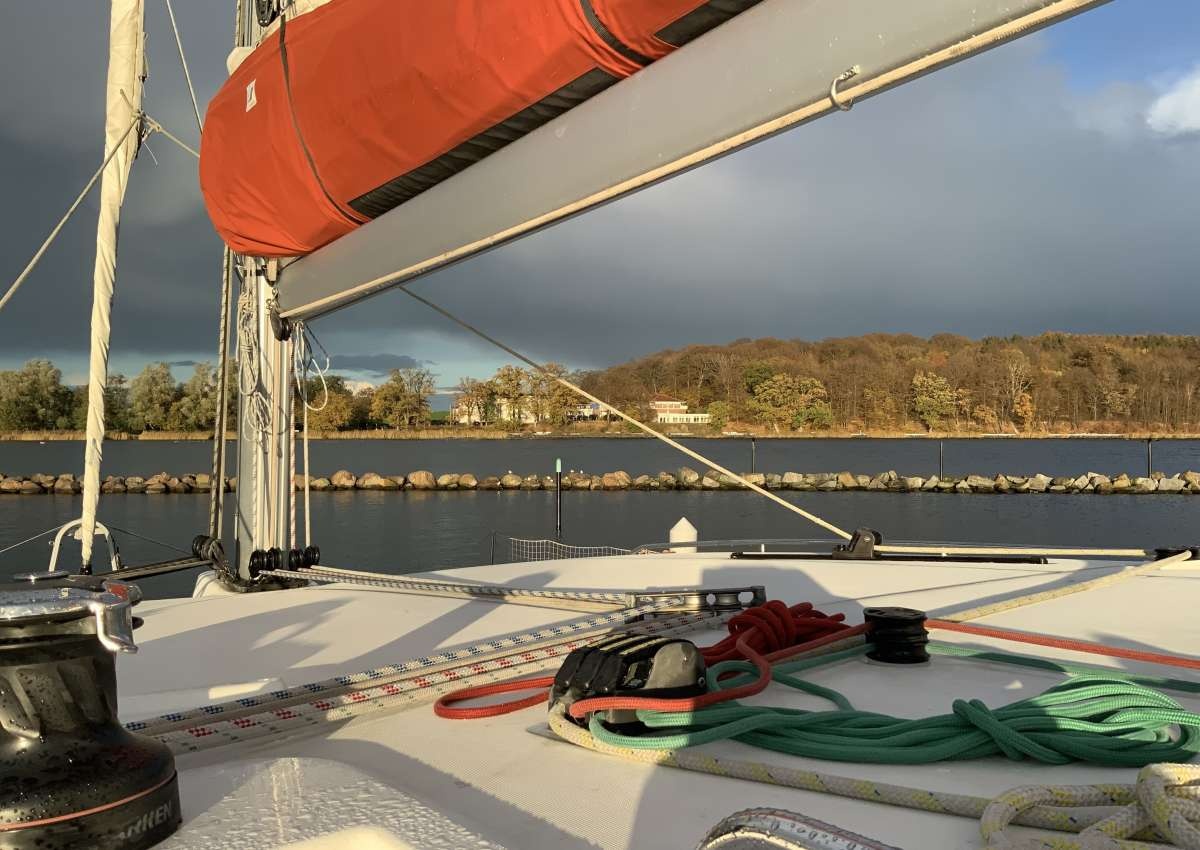 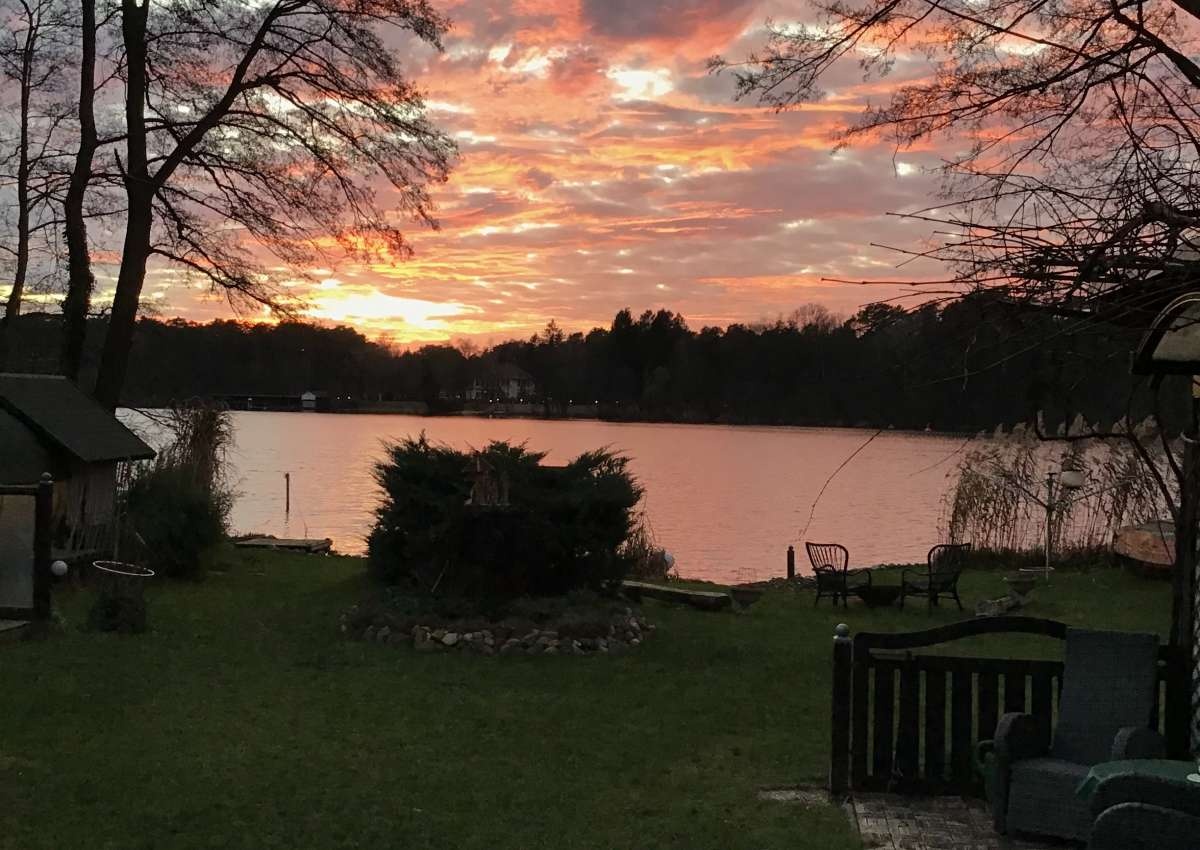 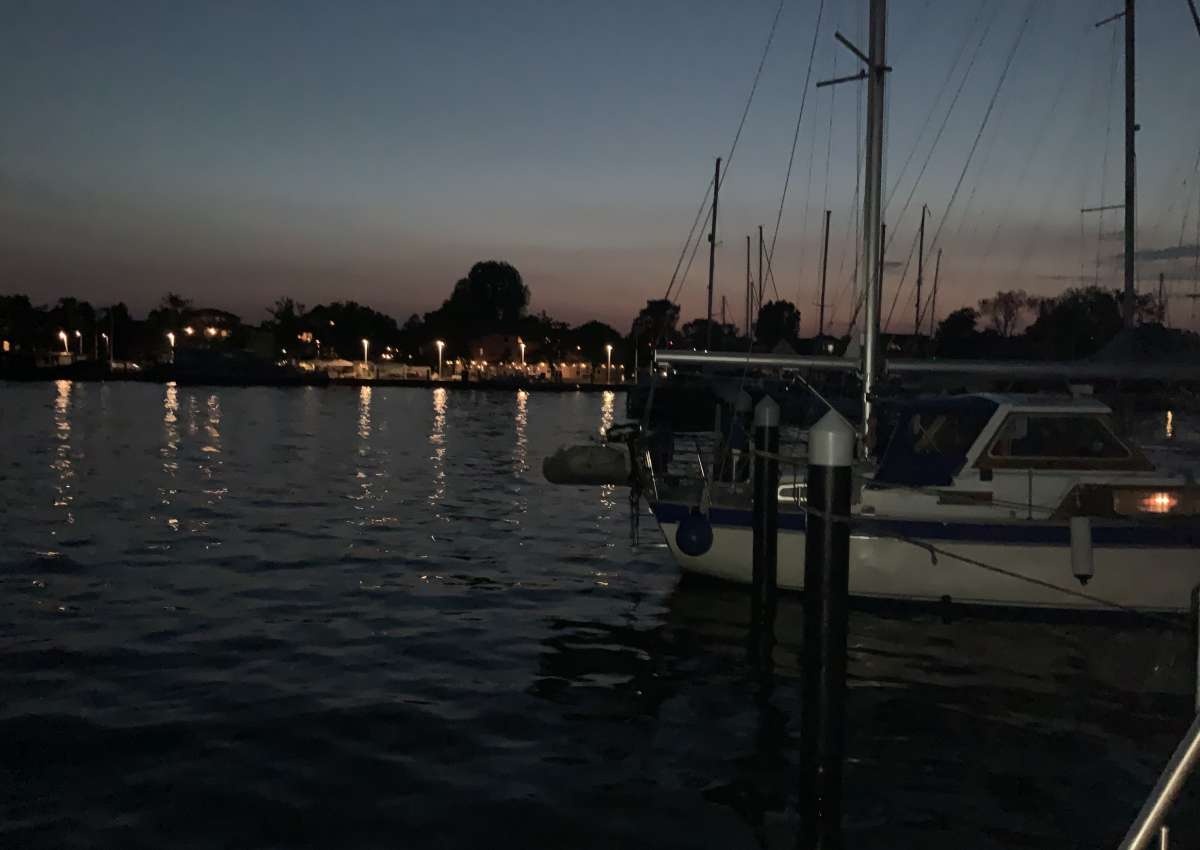 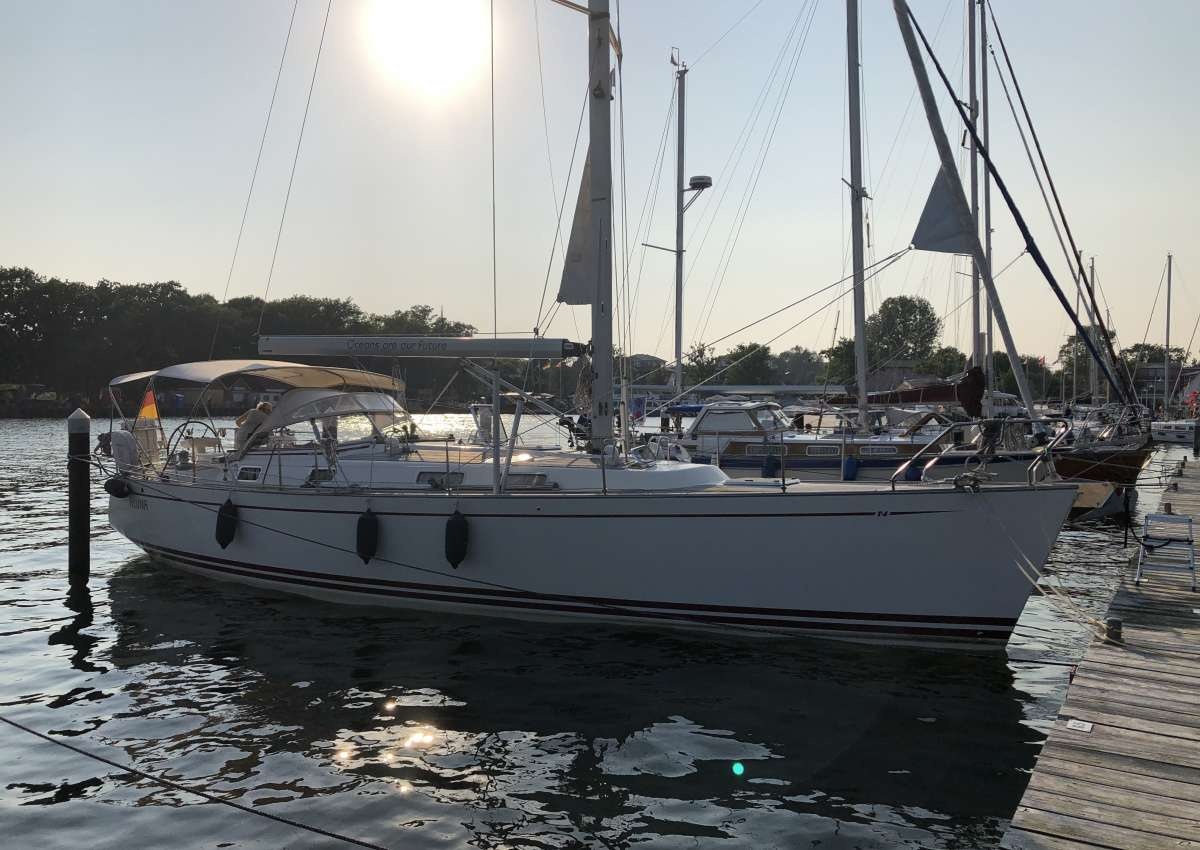 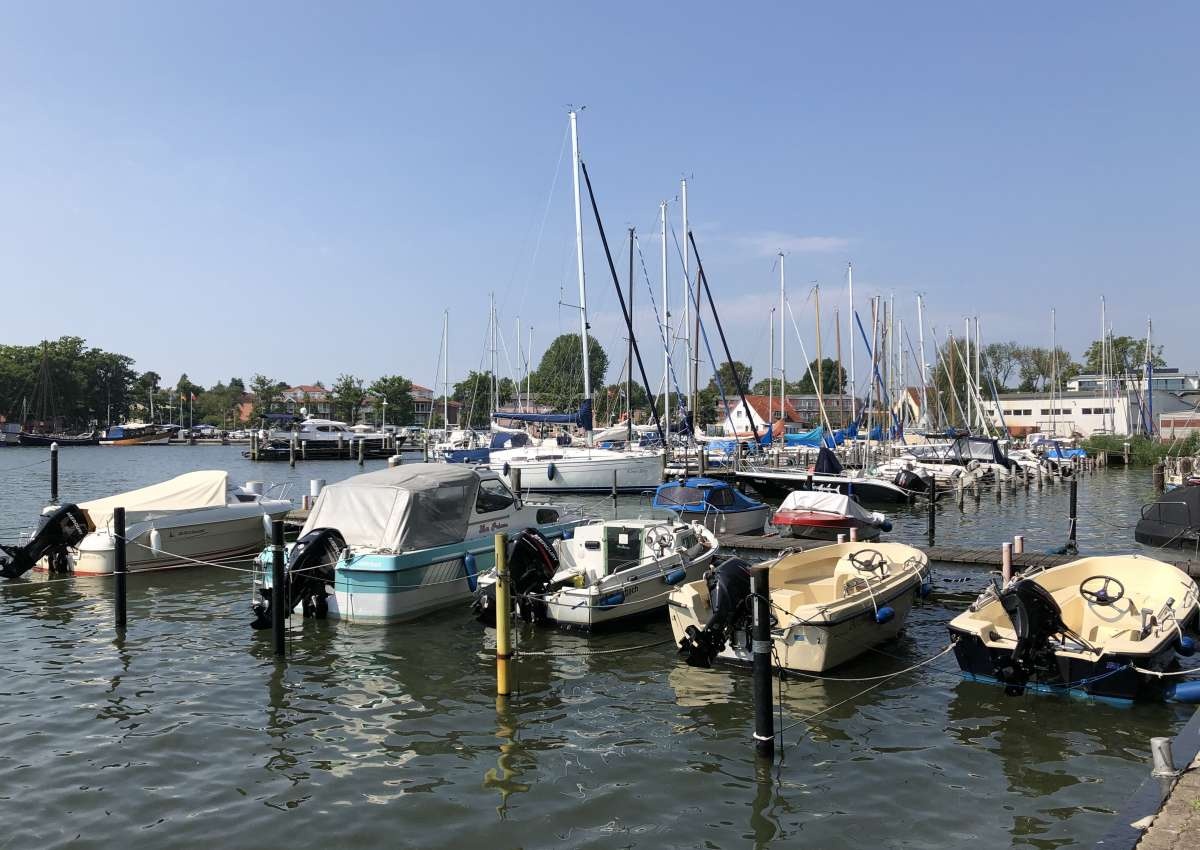 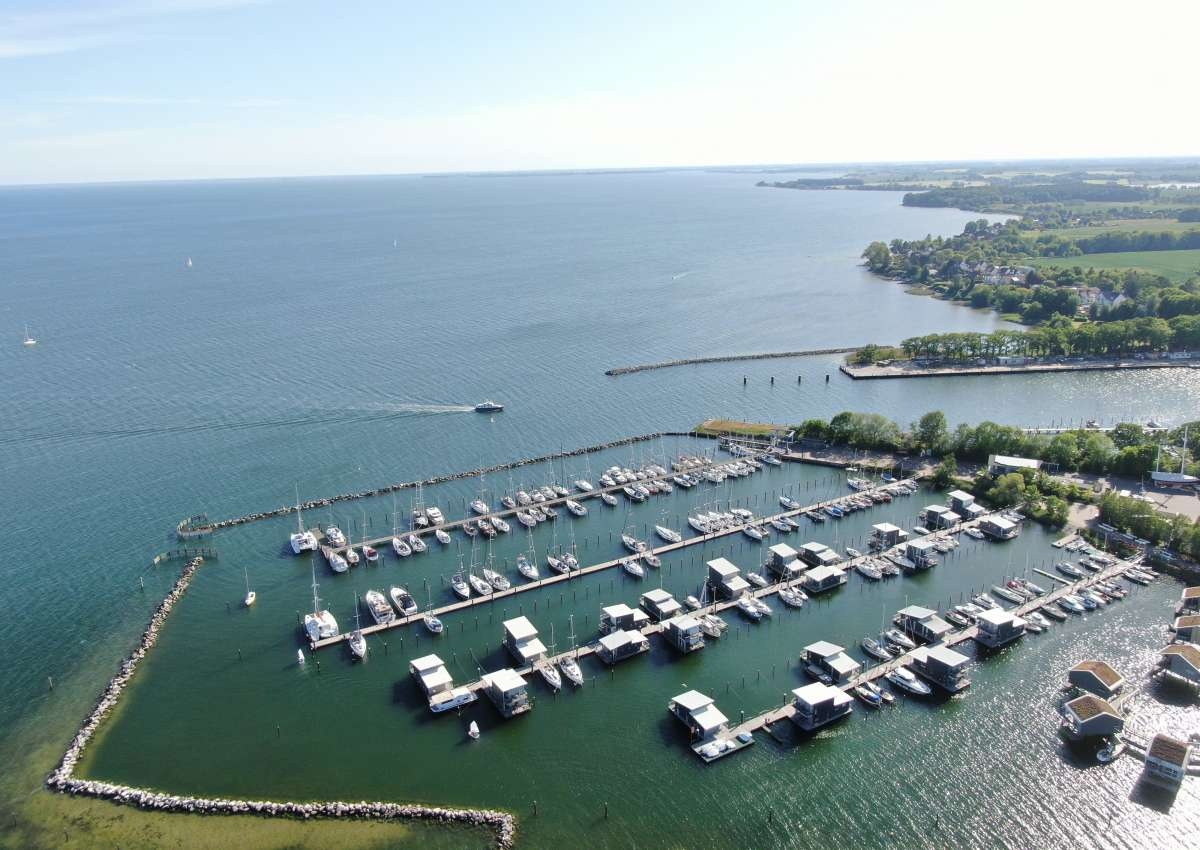 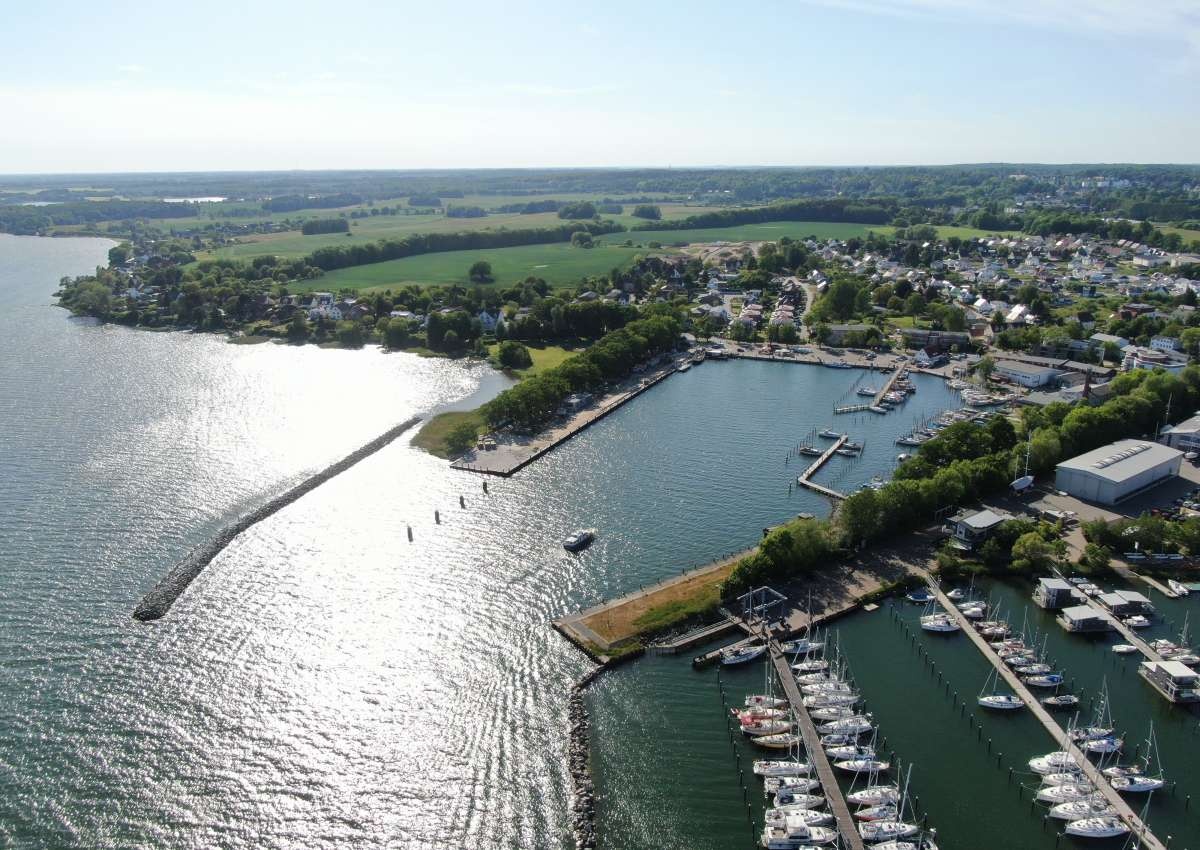 Spacious old trading port and modern marina on the north coast of the Greifswald Bodden.

The approach is possible day and night via the well buoyed and in the western part lit fairway Lauterbach. Coming from the southwest, keep clear of the rocky reef west of the island of Vilm.

From the east and southeast, avoid the shallow northeast foothills of the island of Vilm .

In addition, avoid the rocky shoal west of the red spar buoy LB 2 if the draught is sufficient.

There are several berthing options, all of which are managed by im-jaich:

Supply facilities and restaurants are available. Sanitary facilities are located in the marina (a little further from the jetties in the commercial harbour). A repair shop can be found at the fishing port, a travel lift and repair and engine service in the marina.

The Lauterbach Mole stop of the "Rasender Roland" (Rügen's Bäderbahn) is located directly at the harbour.

Lauterbach has a train station north of the pier. However, because the small town and cultural centre of Putbus, two kilometres to the northwest, can also be easily reached on foot, the railway station is mainly of interest for excursions to the district town of Bergen, eight kilometres away. Those who want to avoid tourist hustle and bustle, however, should be forewarned.

About 18,000 inhabitants live in the administrative and commercial metropolis of Bergen, which is also a transport hub at the geographical centre of the island. The small-town character has been preserved in the core of the town. The most outstanding sight is the 27-metre-high Ernst Moritz Arndt Tower, which was completed in 1877 (for information on Ernst Moritz Arndt, see Puddemin). From this massive building, erected in memory of the great patriot, you can overlook large parts of Rügen, including the Jasmund Bodden. The view must have been appreciated by the Slavic princes who founded the settlement and fortress of Gora, which means mountain, a little further on the ridge (90 m above sea level). The town name Bergen was obviously derived from it.

It was Prince Jaromar I who always kept an eye on his subjects here from his castle. However, there is no longer any trace of his princely residence, although the castle square and the breast weir suggest that it was once an impressive defensive fortification.

The Rügen chronicler Johann Jacob Grümbke was already enthralled by the view from the Rugard. In his "Ramblings through Rügenland" published in 1805, he wrote: "Indeed, the old Rügen princes could also choose no more appropriate place for their residence than the crest of this mountain, which dominates the view over the entire island country." Grümbke further reports that the foundation stones of the castle are today in the base of Spycker Castle (see Martinshafen). According to an old man's tale, the Swedish commander Wrangel would have had them excavated and transported by water to Jasmund.

The centre of Bergen is the market square. Here stands what is said to be the oldest half-timbered house on the island of Rügen. We leave it to the reader to decipher the year of construction stamped into the half-timbering. And immediately another superlative: The Bergen Marienkirche is the oldest preserved building on Rügen. In 1180, Prince Jaromar I had the brick building erected and only 13 years later it became a nunnery. The Slavic prince will not have built the church of his own free will, but in 1168 Rügen had been conquered by the Danes and Christianised under Waldemar I. The Danish influence on the church is thus evident. Thus the Danish influence on the architectural style is unmistakable. The most interesting remnant from the Slavic period from this historical aspect is the gravestone embedded in the church wall. It probably represents the Slavic god Swantewit .

On a plateau two kilometres inland from the port of Lauterbach lies the centre of the small town of Putbus. Here, already at the beginning of the 19th century, the Prince of Putbus developed the surroundings of his castle into a luxury spa according to plan - with an eye on the solvent nobility and highly placed personalities.

The castle of Malte von Putbus was to be renovated in the 1960s. An emissary is said to have been sent to the West to make the necessary purchases. The employee used the opportunity to escape and it is said that he also embezzled the funds intended for purchase in the process. Thus, unbelievably but true, the castle was summarily demolished. Despite this bitter architectural loss, a number of other historic buildings and features still recall the time when the first well-heeled summer guests strolled through the spacious park: an orangery (1824), a neo-classical theatre (1821), a late neo-classical basilica (1846), an old riding hall, a garden house converted into a park café (Rose Café) and a number of residential houses in the neo-classical style.

A special feature of the rose garden near the café is the ginkgo, also known as the Urbaum - a living fossil (as Darwin said).

In terms of evolutionary history, the ginkgo family represents the link between ferns and conifers, a plant family that can be traced back over millions of years. Of the numerous species, however, only the "Ginkgo biloba" is said to have survived today. The most striking thing about it is its fan-like, two-lobed leaves. In autumn they turn yellow and the ripe, cherry-sized and fleshy fruits smell of butyric acid. In our country, the gingko died out during the Ice Age and was then imported from China in the 19th century as a fashionable plant. Douglas firs and sequoias also adorn the impressive parkland of this town of 5,000 inhabitants.

Also worth seeing is Putbus's almost ten-hectare game reserve with its old trees, fallow and red deer roaming in the wild and the "Jägerhütte" restaurant. The square with its classicist buildings, which was laid out for the aristocratic clientele in the north-east of the town, used to be called a circus because of its circular shape. An obelisk in the middle of the roundabout commemorates the founding of the princely residential area.

The beginning of the feudal spa business was the bathhouse on the Goor in 1818. It was built by Prince Wilhelm Malte I of Putbus. In the house with elongated colonnade is a café with terrace. A Bronze Age burial mound is located near the bathhouse. More impressive, however, is the megalithic tomb 200 m north of Lauterbach (directly) on the railway line to Putbus. It is considered one of the best preserved on Rügen.

"Rasender Roland" is the name given to the listed bathing railway that runs between Putbus and the Baltic resort of Göhren. However, the old narrow-gauge railway with two old steam locomotives as traction engines is by no means just a holiday attraction. It is used by many locals as a regular means of transport (detailed description: see Baabe). As the mood takes you, you can get off at the individual stations and, for example, take a look at one of the numerous barrows along the track.

The Denkmalhof Zirkow, 6 km northeast of Lauterbach, is an excursion destination worth seeing. Among other things, it houses a complete threshing train as it was still used until 1930 - with straw press, threshing box and ladder wagon.

A particularly interesting document here is an old lease contract with 23 paragraphs between Malte Fürst zu Putbus and the tenant Johann Heinrich Subklev. The paragraphs contain almost exclusively prohibitions for the tenant and rights for the landlord. For example, it says: "If the tenant should be guilty of embezzlement in the manorial woodland, he must pay five times the value of the stolen wood - according to the assessment of the manorial forester - to the 'princely treasury'."

The striking Tuscan column southwest of Lauterbach was created by Wilhelm Stürmer in 1854. The Elector of Brandenburg, looking out over the Baltic, is intended to commemorate the battle of the Brandenburgers and Danes against the Swedes in 1678.

The column northeast of Lauterbach (near Stresow), also by Stürmer, depicts Frederick William I of Prussia, whose statue commemorates the Prussian and Danish victory over the Swedes in 1715, in which 2,000 soldiers lost their lives. The Swedes remained in possession of Rügen despite the defeat: so decided in 1720 in the peace treaty at Frederiksborg at the instigation of the French.