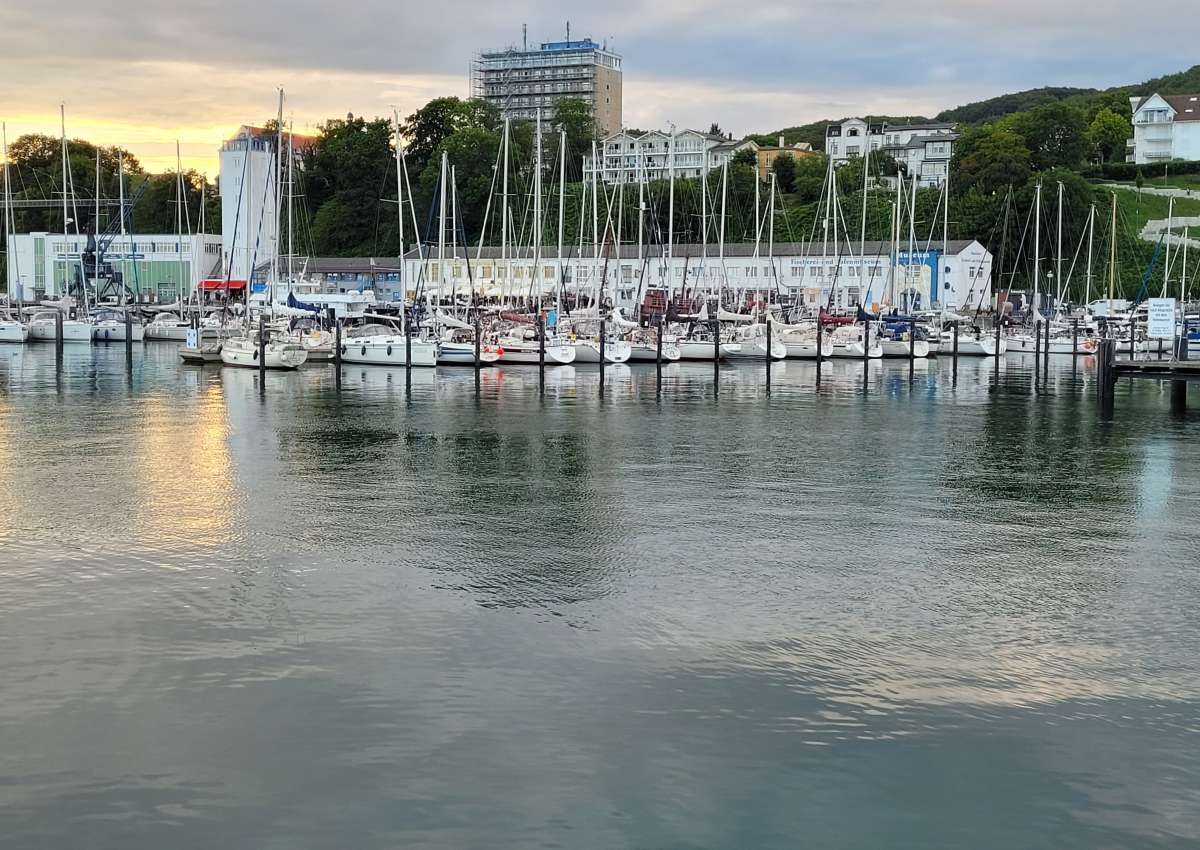 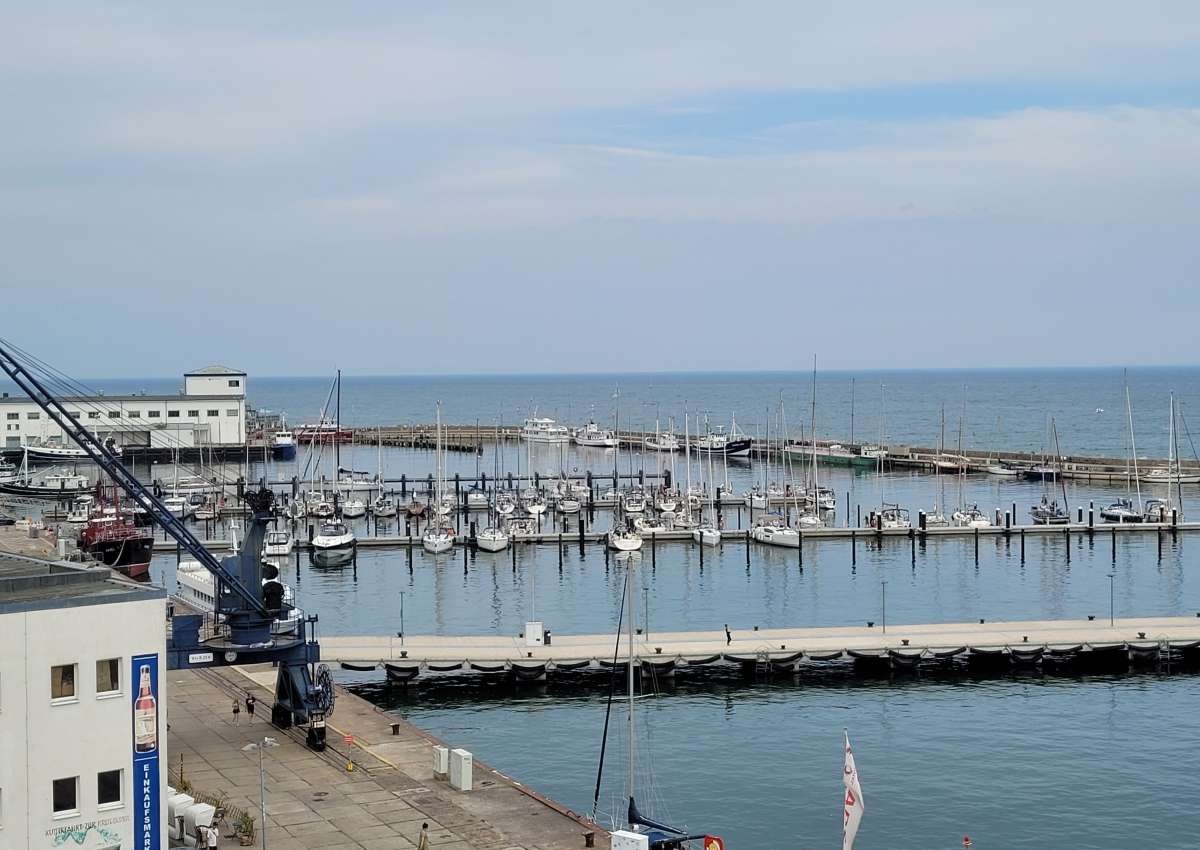 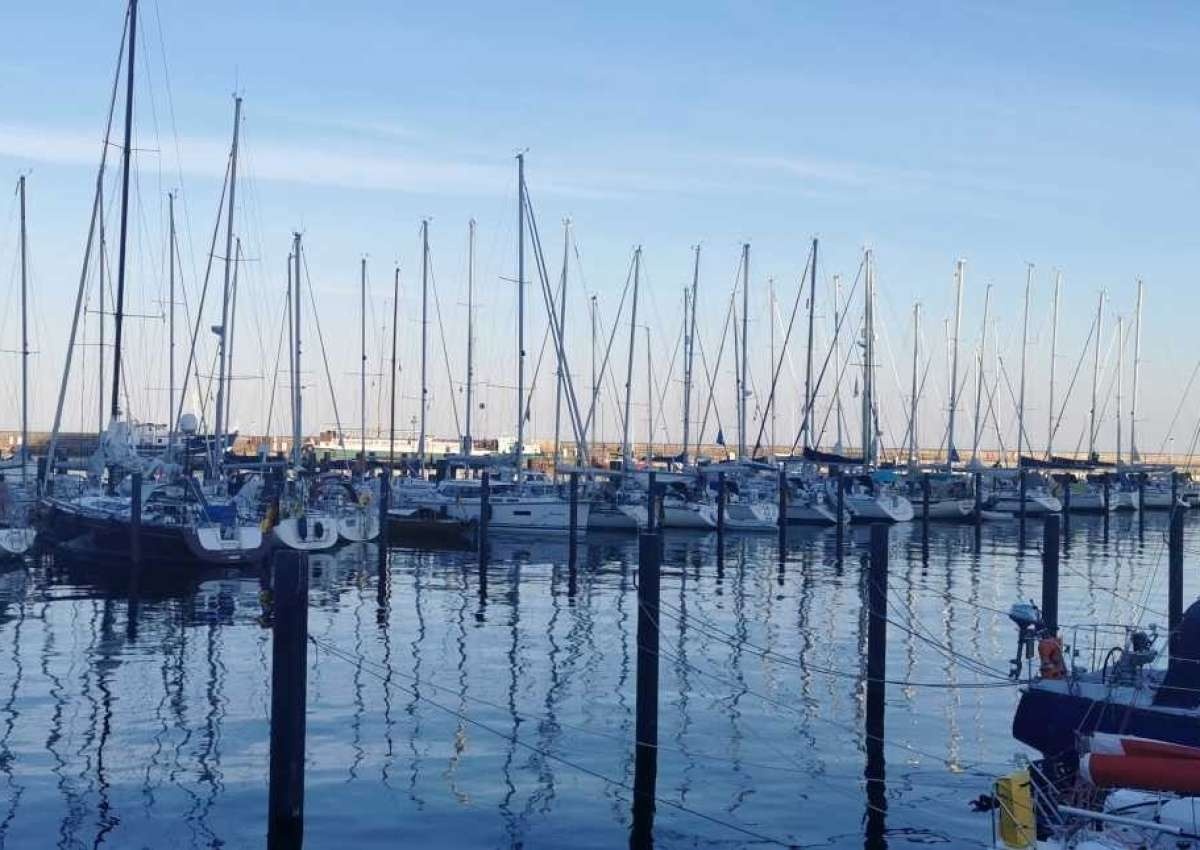 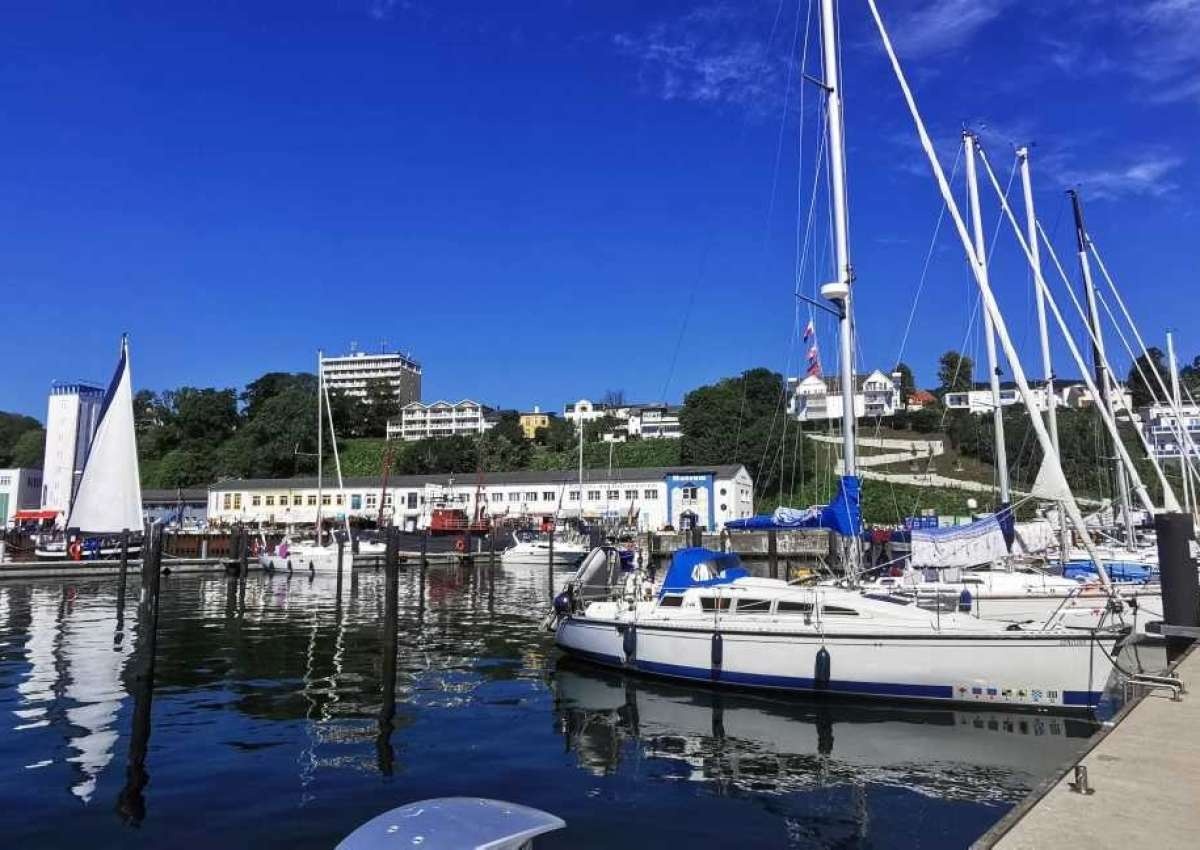 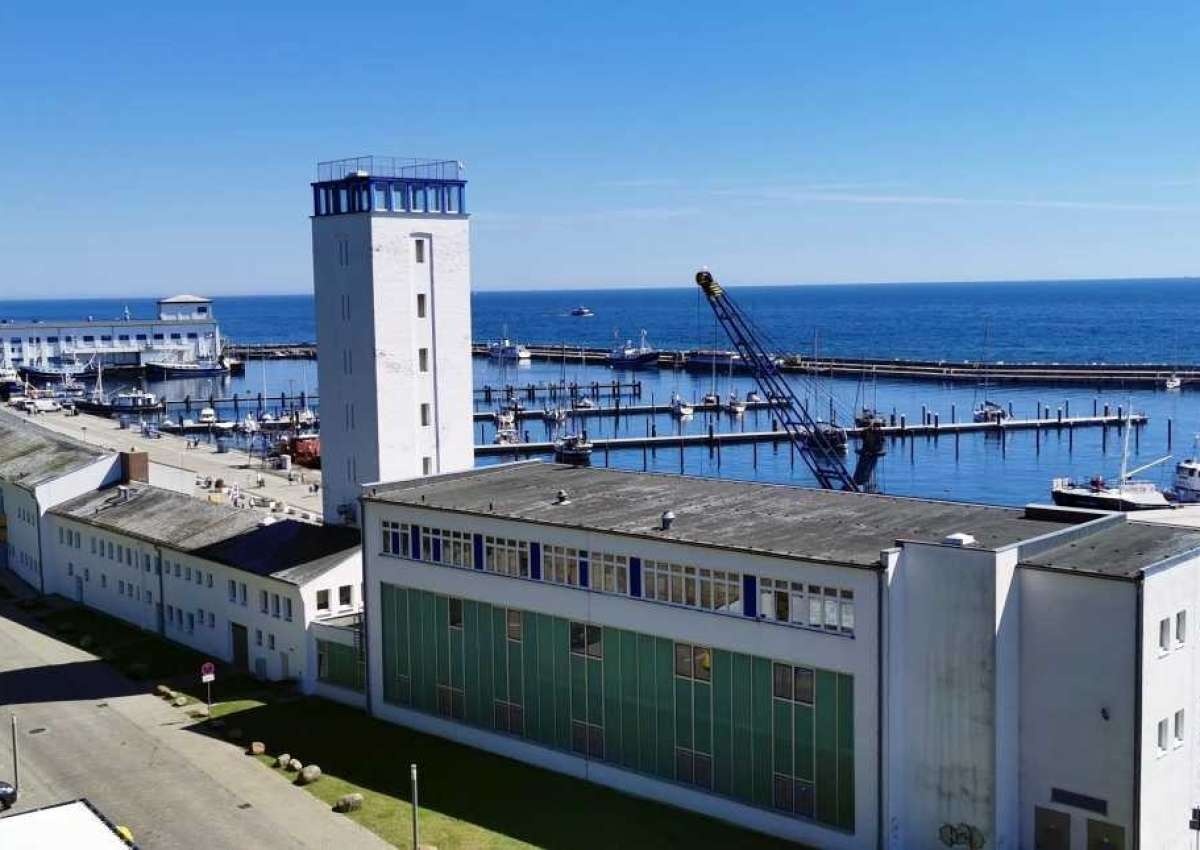 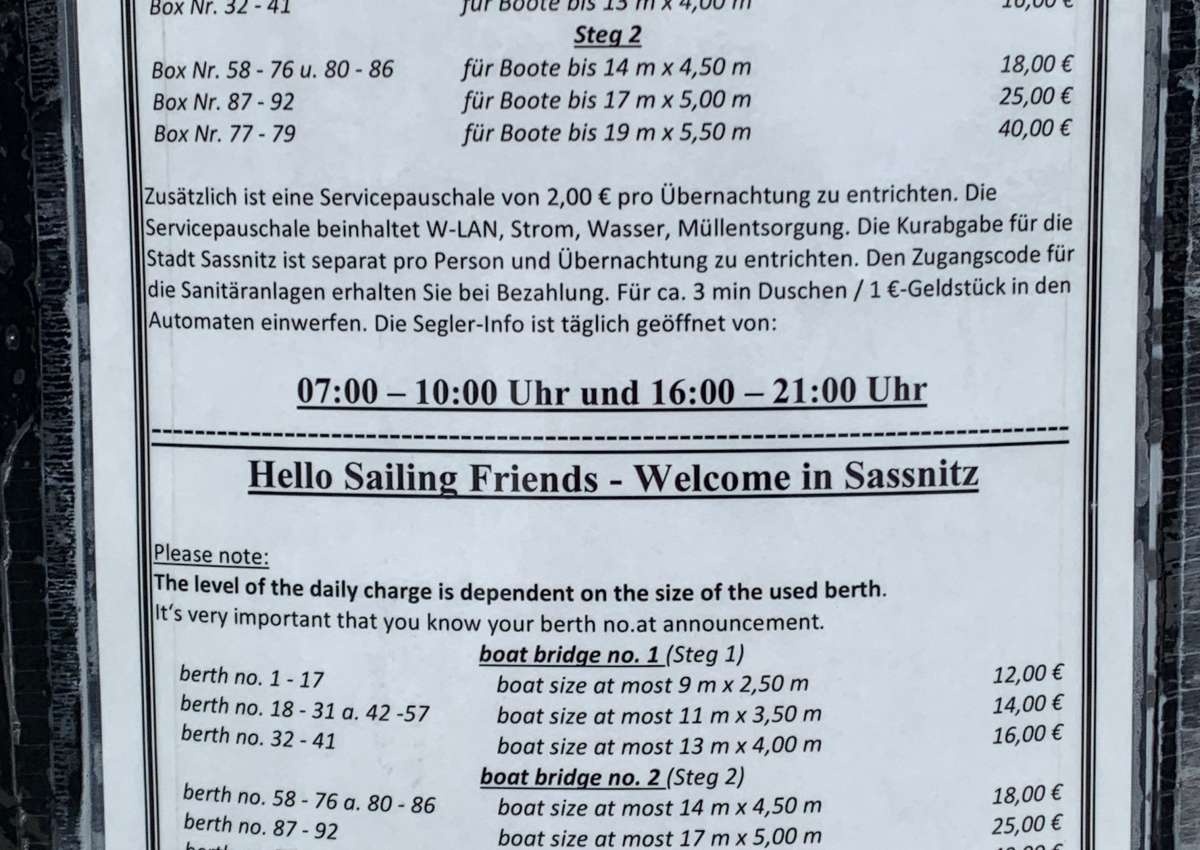 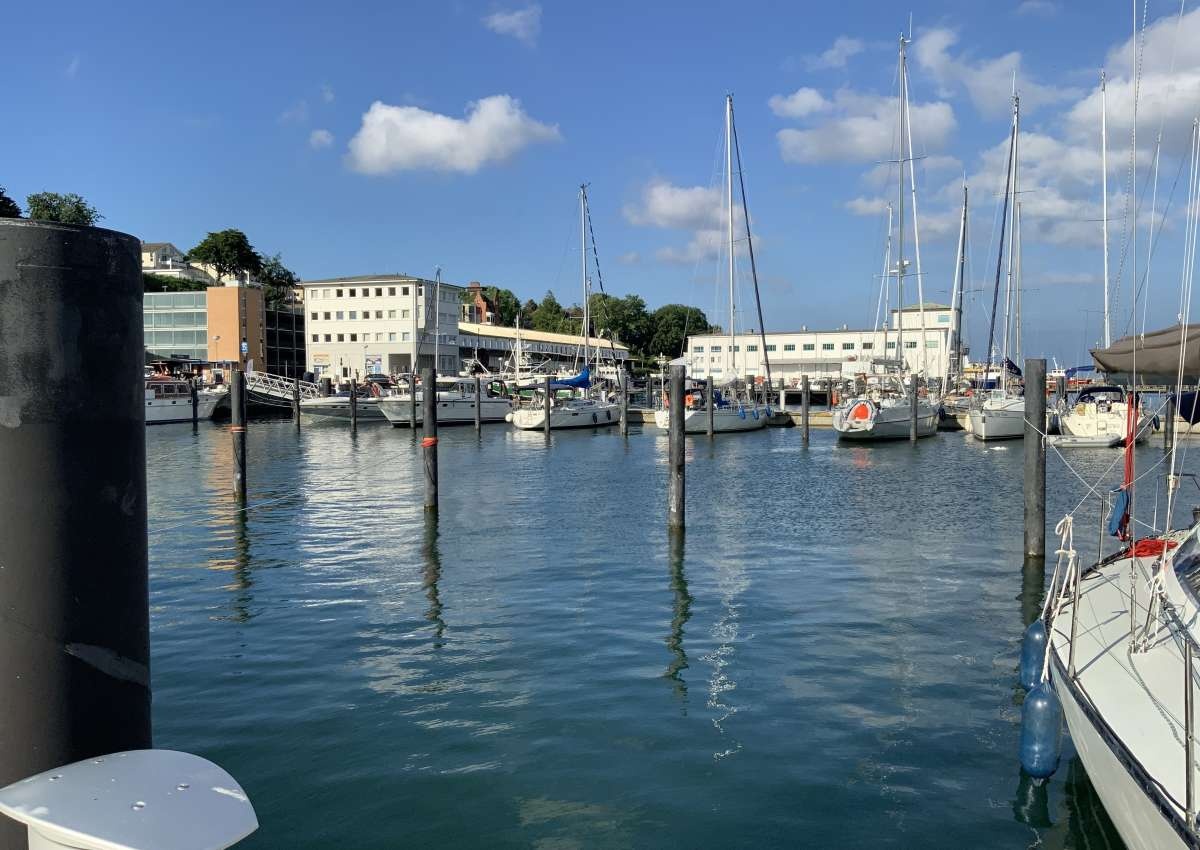 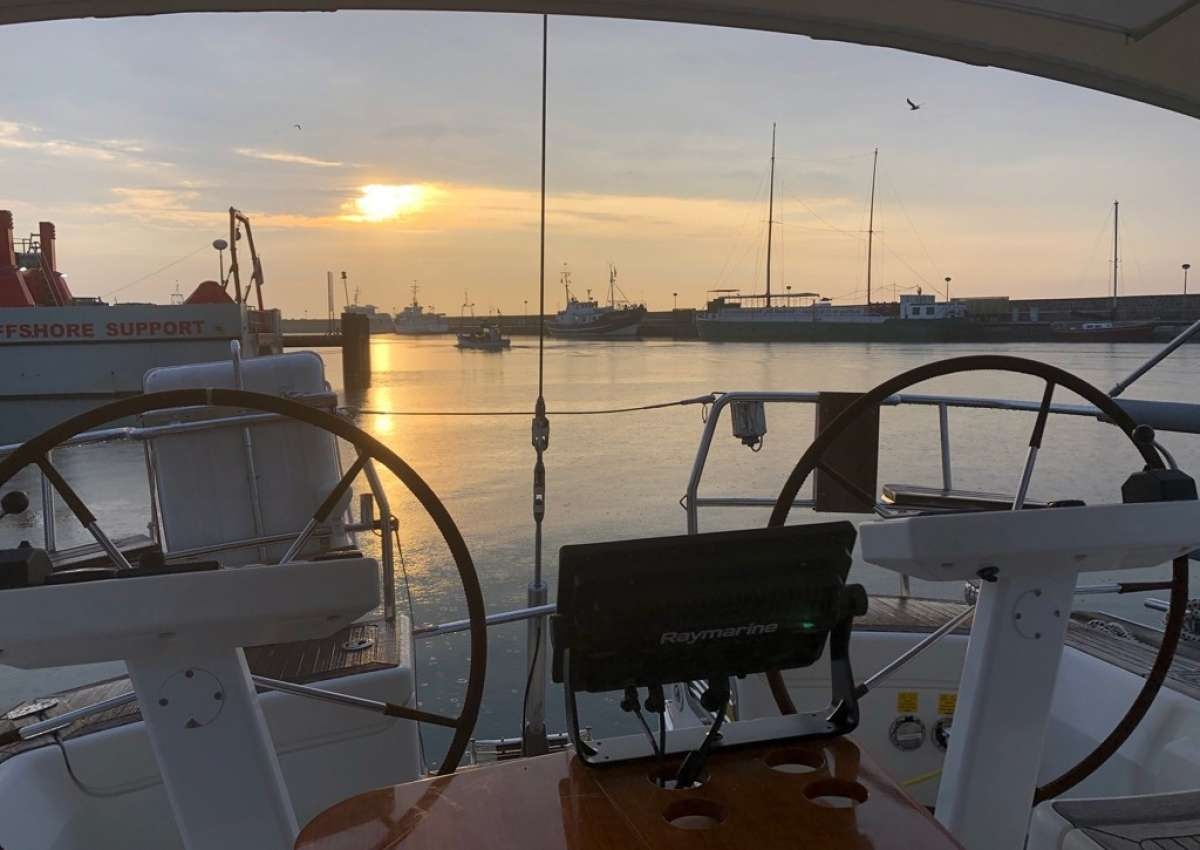 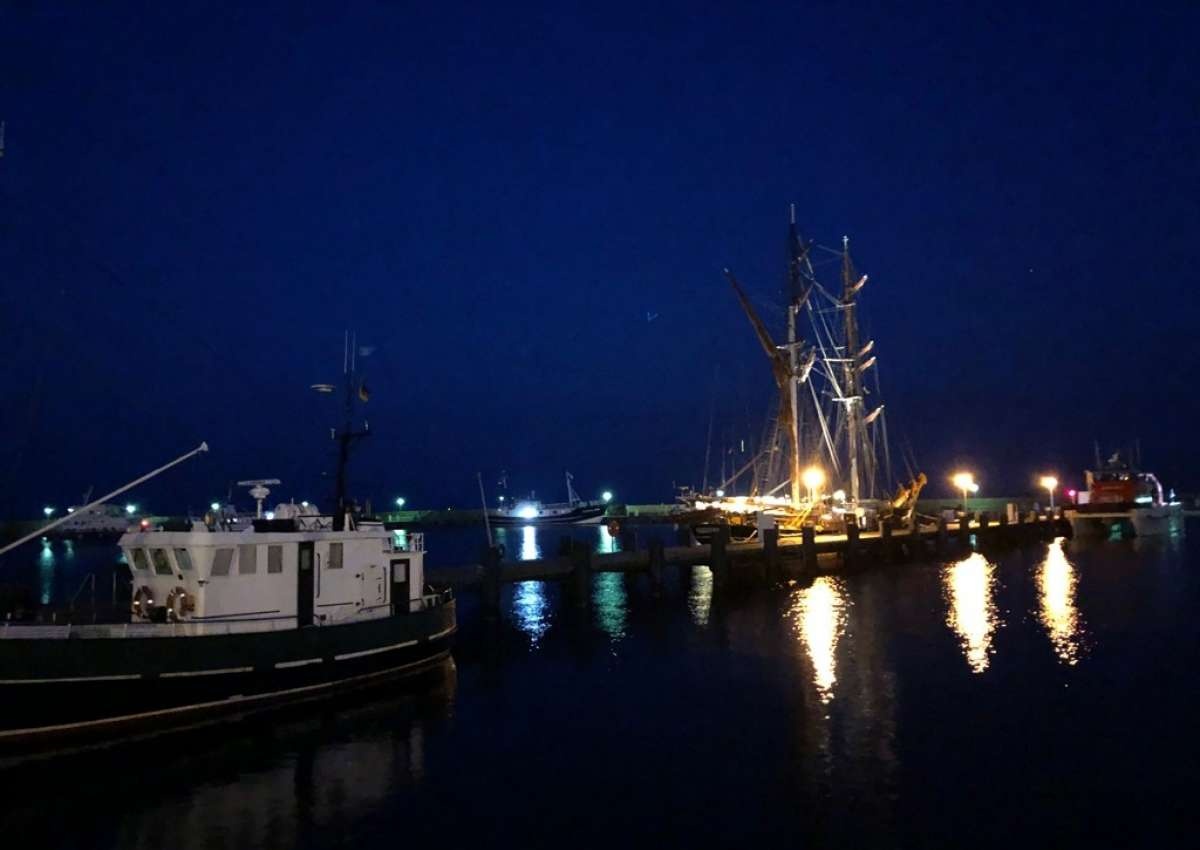 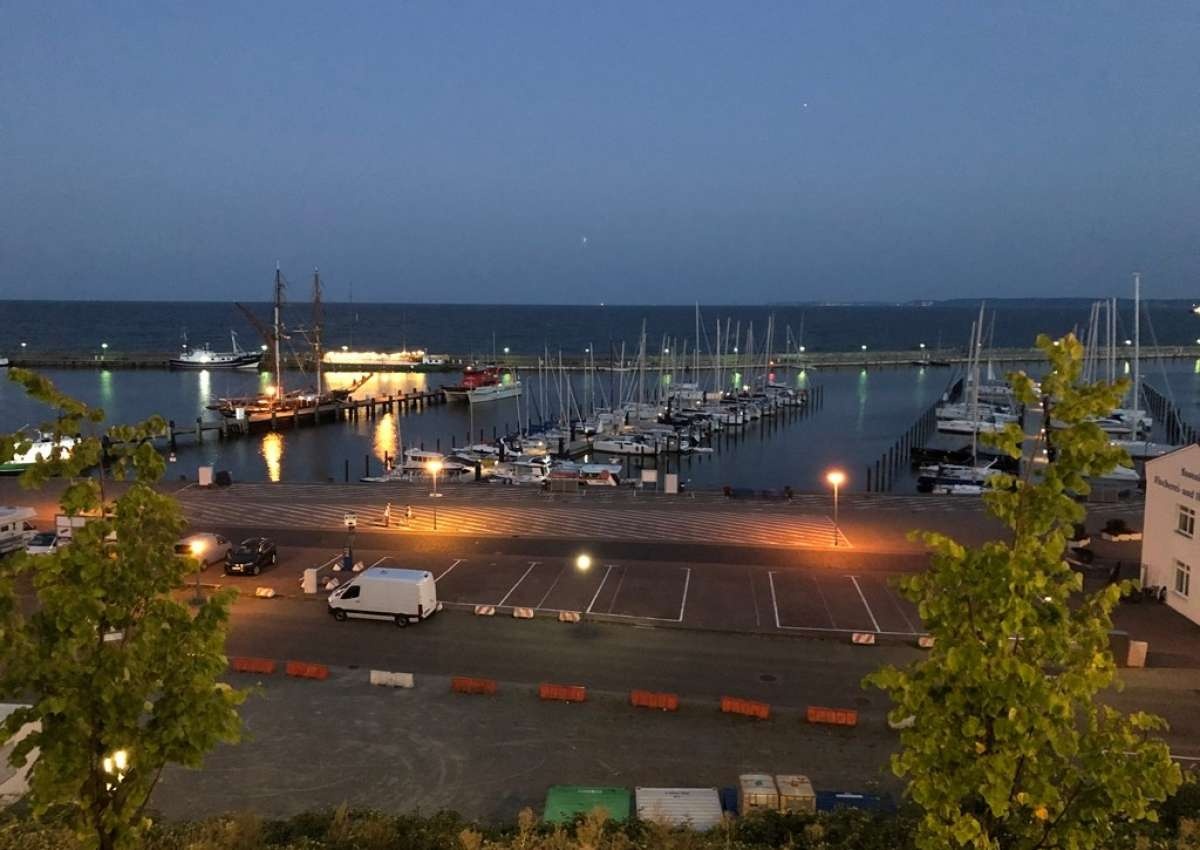 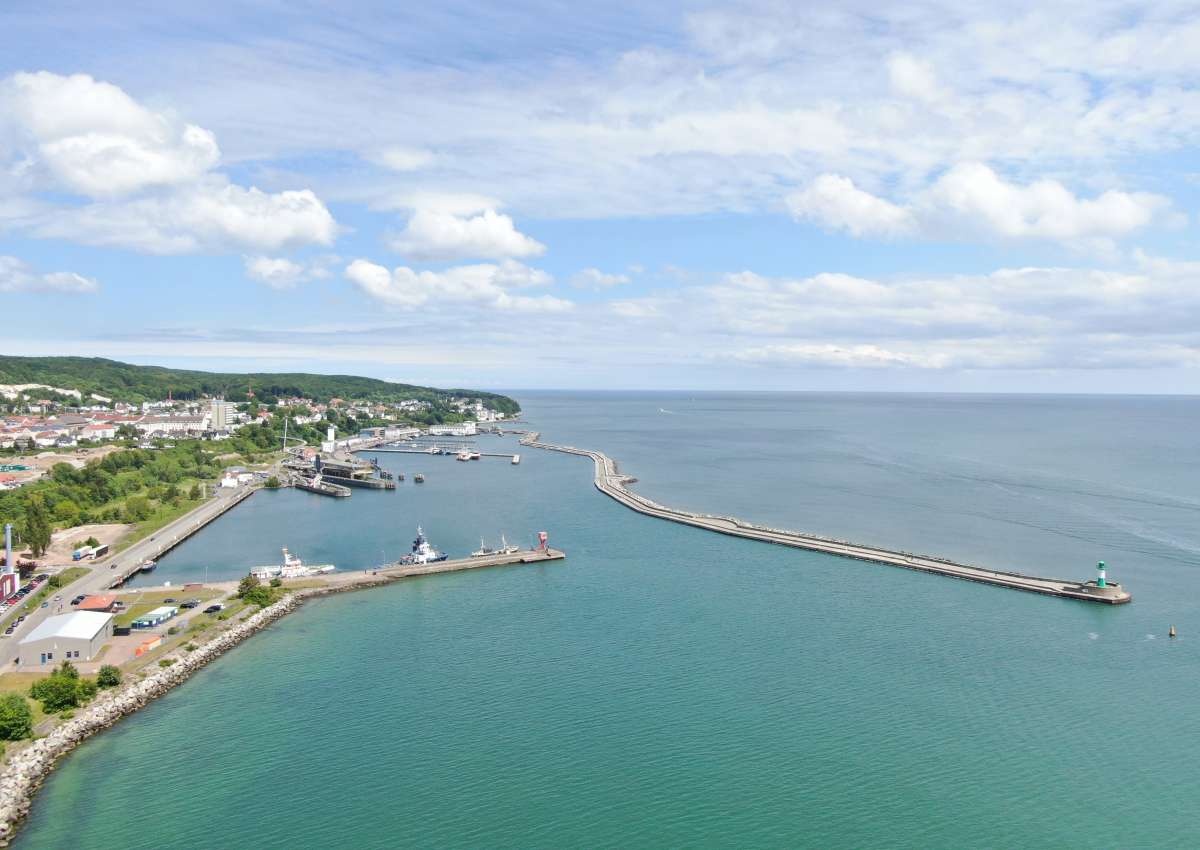 Fishing and former ferry port on the east coast of the island of Rügen.

The approach is possible day and night in the well buoyed and lit fairway. The south cardinal buoy in the harbour entrance is to be passed to the west.

Sports boats can find moorings on the inside of the east pier at a water depth of 2-5 m as well as in front of stern piles at the floating piers on the north side of the harbour basin. The water depth there is 4 - 5m.

The town offers good supply facilities. The former ferry dock houses a museum of underwater archaeology. The ferry port of Mukran, south of Sassnitz, is exclusively a ferry and commercial port.

As a fishermen's settlement, whose huts romantically lie on both sides of the Steinbach under tree umbrellas, the chronicler Johann Jacob Grümbke described the place in his "Ramblings through the Rügenland" published in 1805, which would not be recognizable after this description. In any case, there is no sign of romance at the harbour, a cosy berth is hard to find at the moment. In the city, the many multi-storey apartment buildings stand out, on the outskirts of the city the large number of allotments.

Although it is difficult to get into the holiday mood at the harbour, there are a few good reasons to go to Sassnitz. On the one hand, the town is an excellent "springboard" to Bornholm and, on the other, it offers excellent opportunities for excursions, such as hiking in the 1500-hectare Jasmund nature reserve north of Sassnitz. It is one of the most beautiful landscape regions that Rügen has to offer.

In a northwesterly direction from the harbour, there are the Krampaser Berge, a beautiful forest area between former chalk quarries. The way to a Bronze Age grave is signposted. Also near an old chalk quarry, on the north-eastern edge of the town, about two kilometres away, is the Heimat-Tiergarten. Those who choose a small detour along the beach promenade and the spa square  will pass "Klein Helgoland", as the people of Sassnitz call the huge granite block on the stony coast. This is also where the hiking trail begins, which leads along the steep coast of the Stubnitz Forest for over 5 km. This high shore path reconciles with the less than tranquil town and noisy harbour.

The strong impression that the sea view framed by chalk cliffs and trees already left on Caspar David Friedrich can be understood, even if the famous romantic painter indulged nature a little in his world-famous painting "Chalk Cliffs on Rügen". His artistic freedom in this case was to depict the rocks more lush, exaggerated, rugged and white aIs they actually are. And the foliage of the trees in the upper half of the picture also clashed only in his imagination. But in this way he achieved the desired tunnel-like effect. Many want to have discovered the exact spot that Friedrich depicted, but it is more likely that he captured on canvas a conglomerate of several places on the steep bank between Sassnitz and the Königsstuhl. His nature studies of the Wissower Klinken, the Viktoriasicht, the Königsstuhl and one or two other places are probably combined here in one picture.

More interesting than the idle argument about which rock from which gorge is involved is the theory that Friedrich portrayed himself twice from behind in the picture - as the single artist and as the newlywed husband. This is because Caspar David Friedrich created the sketches for "Chalk Rocks on Rügen" on his honeymoon. On January 21, 1818, to the great astonishment of his friends, he married Caroline Brommer, 19 years his junior, in Dresden. In her opinion, the shy, dreamy artist thus chose a simple bourgeois woman who took over the upbringing of his children completely and also kept everyday worries away from him, so he did not have to change in his way of life.

The honeymoon first took the newlyweds to his three brothers and was then continued to Wolgast, Rügen and Stralsund. The serene August day Caspar David experienced with his wife, as well as his favourite brother Christian and his wife, must have been such a treasured memory for him that he did not want to display the painting publicly. The often-interpreted gesture of his wife in the painting and the heart shape formed by trees and grass indicate a very private work, from which Frederick probably feared insight into his inner life.

Friedrich's artistic fame was short-lived during his lifetime, and today there is often great uncertainty about which paintings can be attributed to him, as he neither dated nor signed them. In the period from 1805 to 1818 he found appeal and buyers.

He was put on a par with great landscape painters, but then scathing art criticism set in, with Goethe joining in. His works were poor, distorted nature and not very artistic.

Mysticism and a blind religiosity were reflected in them. For the democrats he is not revolutionary enough, for the conservatives too abstract. By the time he dies in 1840, he has been all but forgotten. Half a century later, the Norwegian historian Andreas Aubert rediscovers him while working on a monograph about a compatriot who had admired Frederick in his writings. When Aubert then travels to the National Gallery in Berlin, he gets into a heated argument with the director about the existence of the artist and his paintings. An aged museum servant who overhears the argument recalls and points out that the dusty stacks actually contain paintings by a Caspar David Friedrich. Today, no German artist of the 18th or 19th century has a comparable reputation. His paintings are traded at prices that would have made the artist rich during his lifetime. In addition to classics, "his" white rocks appear in art books all over the world.

But with his "Chalk Rocks on Rügen", Caspar David Friedrich has not only created a great work of art, but moreover a picture that stands for Rügen like no other. Many visitors to the island want to "go where C.D. Friedrich painted the chalk cliffs". The painting is as much a trademark as the 117-metre-high Königsstuhl, which offers an impressive view from Klein Stubbenkammer. However, the Stubnitz is also worth a visit because of its beautiful forest hiking trails and the more than 20 barrows, which, together with the hill of the Herthaburg near Stummenkammer (5 km north of Sassnitz), remind us of the Slavic period 1000 years ago (see: Ralswiek and Breege). The roughly ten-metre-high castle rampart overlooks the 115-metre-high Herthasee.

The Königsstuhl is said to have been a base for the notorious buccaneers Klaus Störtebeker and Michel Gädike. The treasure cave of the pirates played a role in the traditional legend of the virgin at the Waschstein. Every seven years an enchanted princess appeared at the foot of the king's chair to wash her bloody clothes by the sea. Whoever should be lucky enough to meet her and greet her would redeem her and receive a rich gift in return, it was said. And indeed, one day a fisherman succeeded in approaching the beautiful maiden. As if by magic, the woman disappeared and appeared to the perplexed fisherman at midnight. She ordered the man to follow her and led him into a cave littered with gold, silver and precious stones. Before the fisherman had recovered from the overwhelming impression, a great black ship approached the cave, from which emerged the ghosts of the decapitated Störtebeker and his Likedeeler-all with their heads under their arms. They were condemned to count their treasures every night. The fisherman went unnoticed and received a chest full of gold and gems from the maiden. On the beach, the fisherman looked around again for the princess, but she had disappeared - along with the cave.

The chalk cliffs themselves are a treasure of a geological nature. Their white chalk is nothing more than shells of small marine organisms initially deposited in the sea. Three-quarters of the chalk is made up of the shells of single-celled creatures that "piled up" underwater (a few millimetres every ten years) during the 70 million years of the Cretaceous period and were forced to the surface during the Ice Age. Not even ten percent of Cretaceous fossils are larger than 0.1mm.

Fossilized fossils among the limestone layers provide information about living things tens of millions of years ago. Fifteen different sea urchin fossils alone have been discovered in the Rügen Chalk. The ten centimetre long thunderbolts are the remains of extinct belemnites. The octopus species lived 70 million years ago in the Cretaceous sea. Siliceous sponges, corals, worm tubes, bryozoans and numerous species of molluscs are among many other fossils found at the foot of the chalk cliffs.