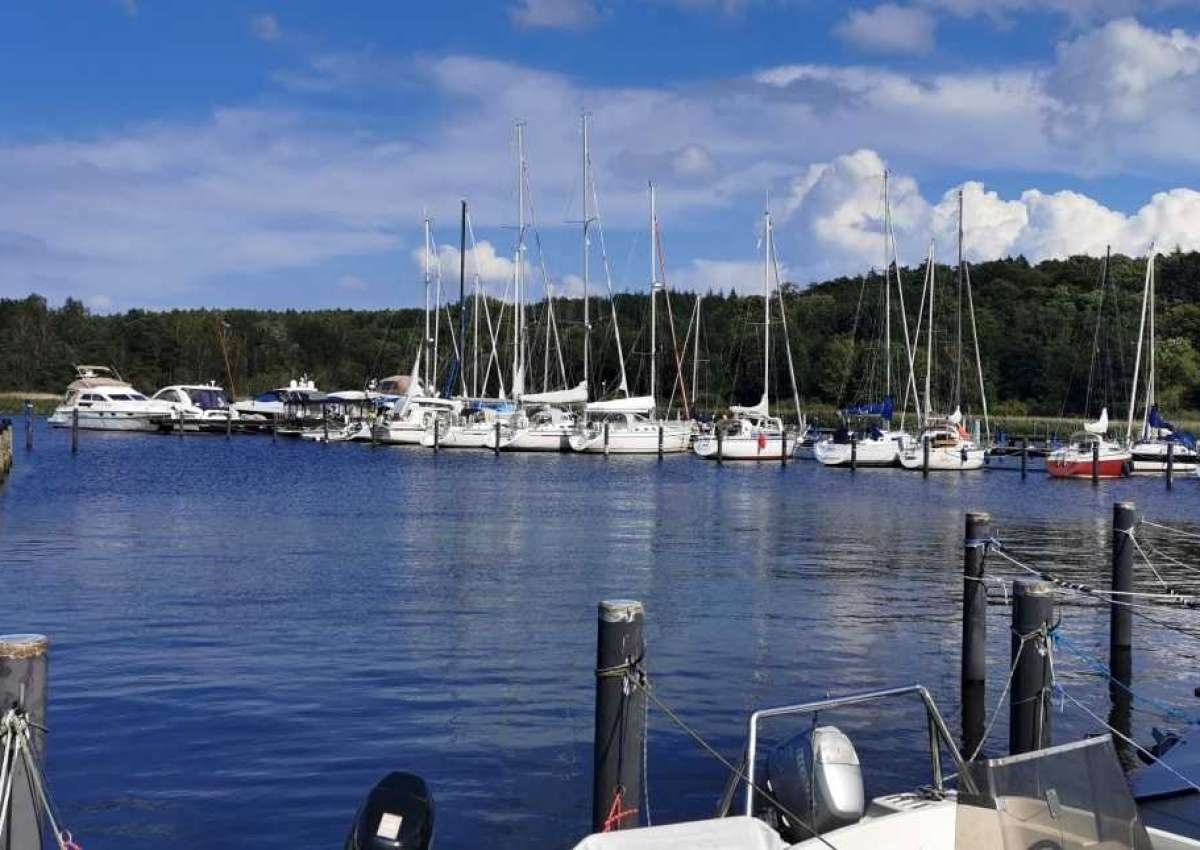 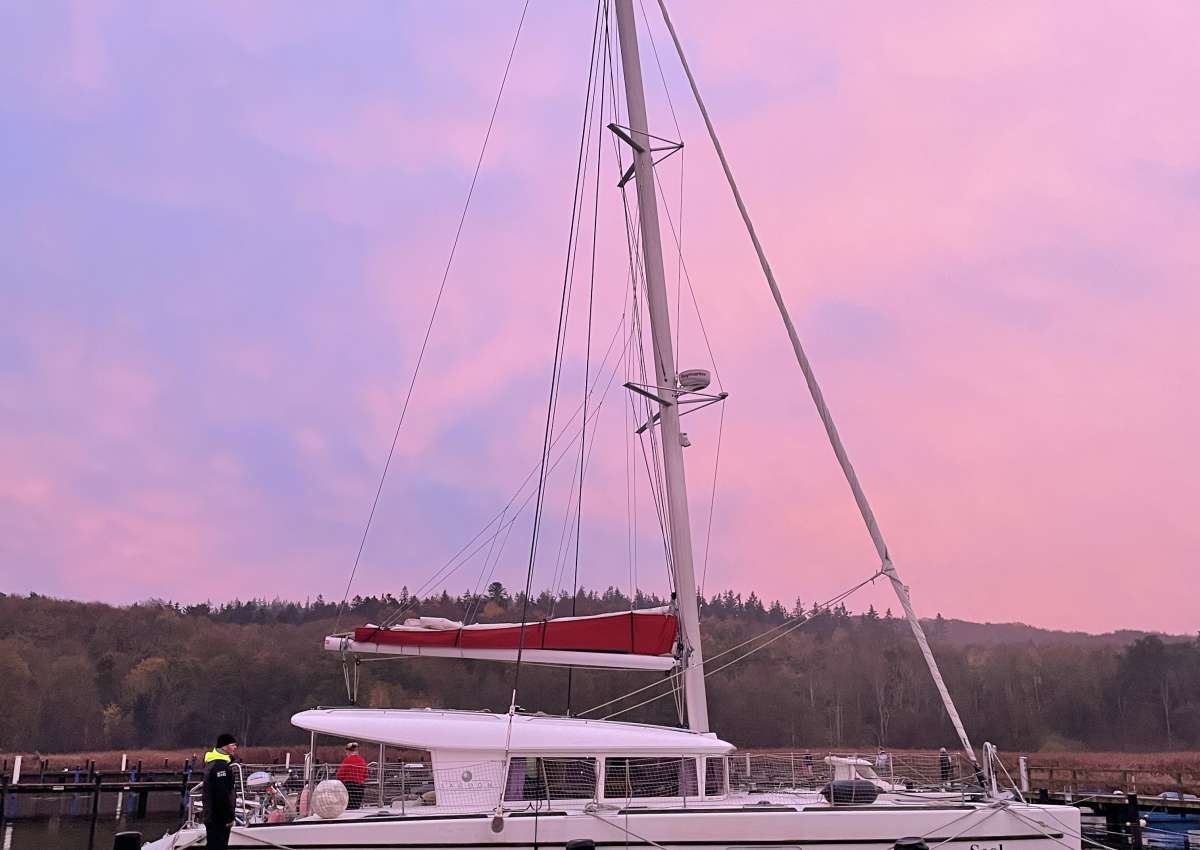 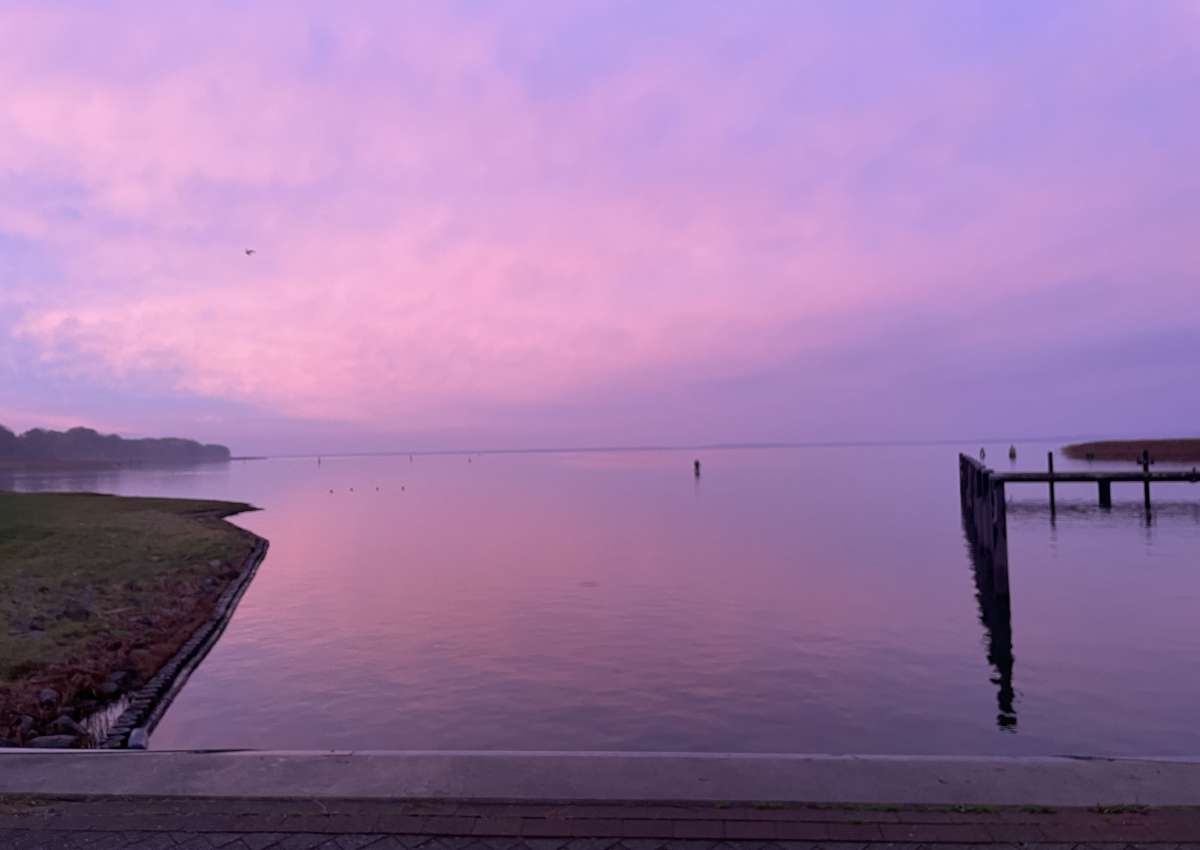 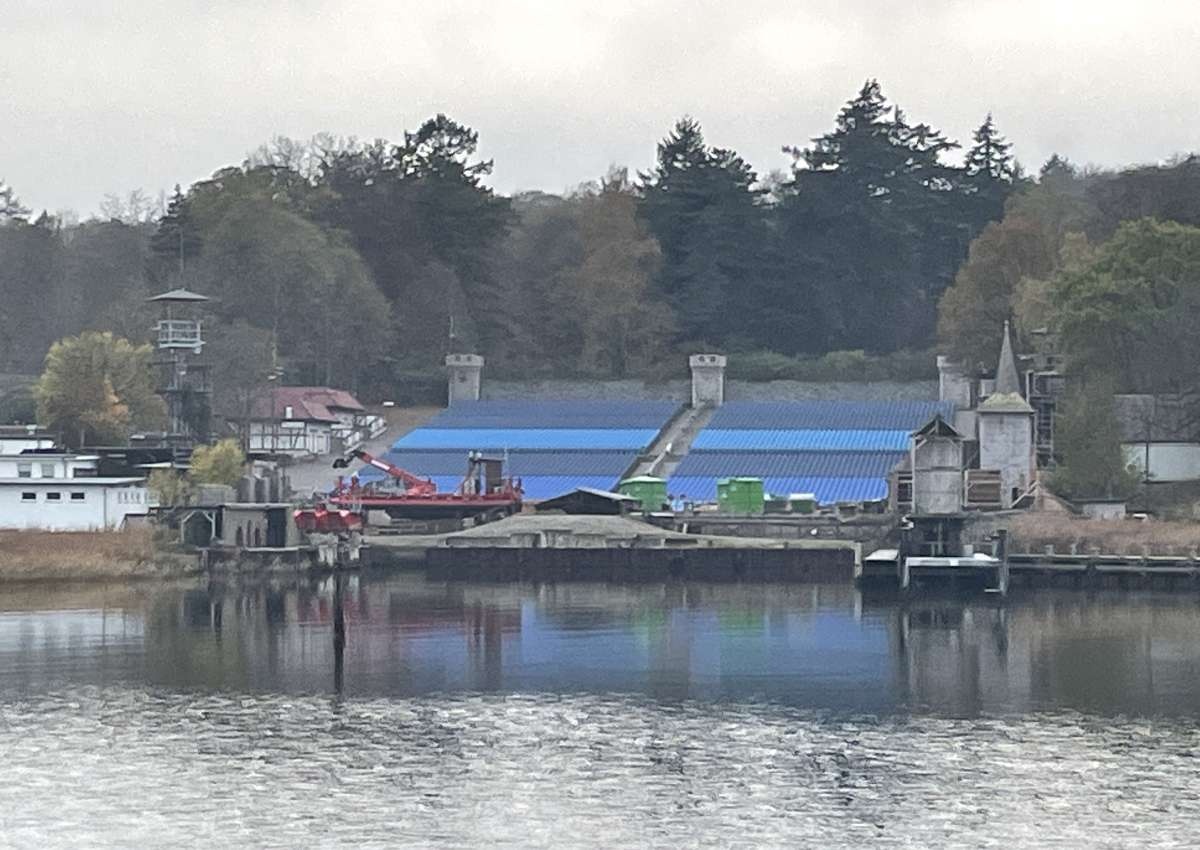 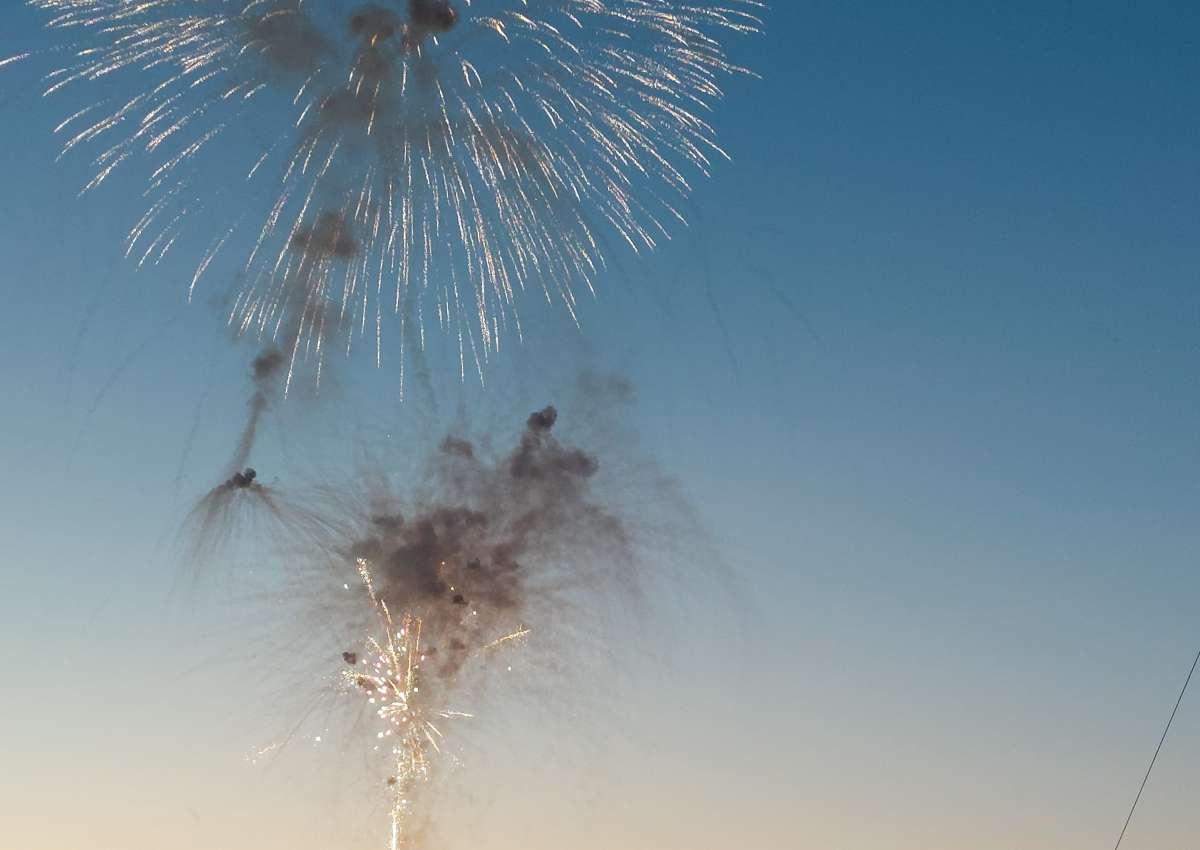 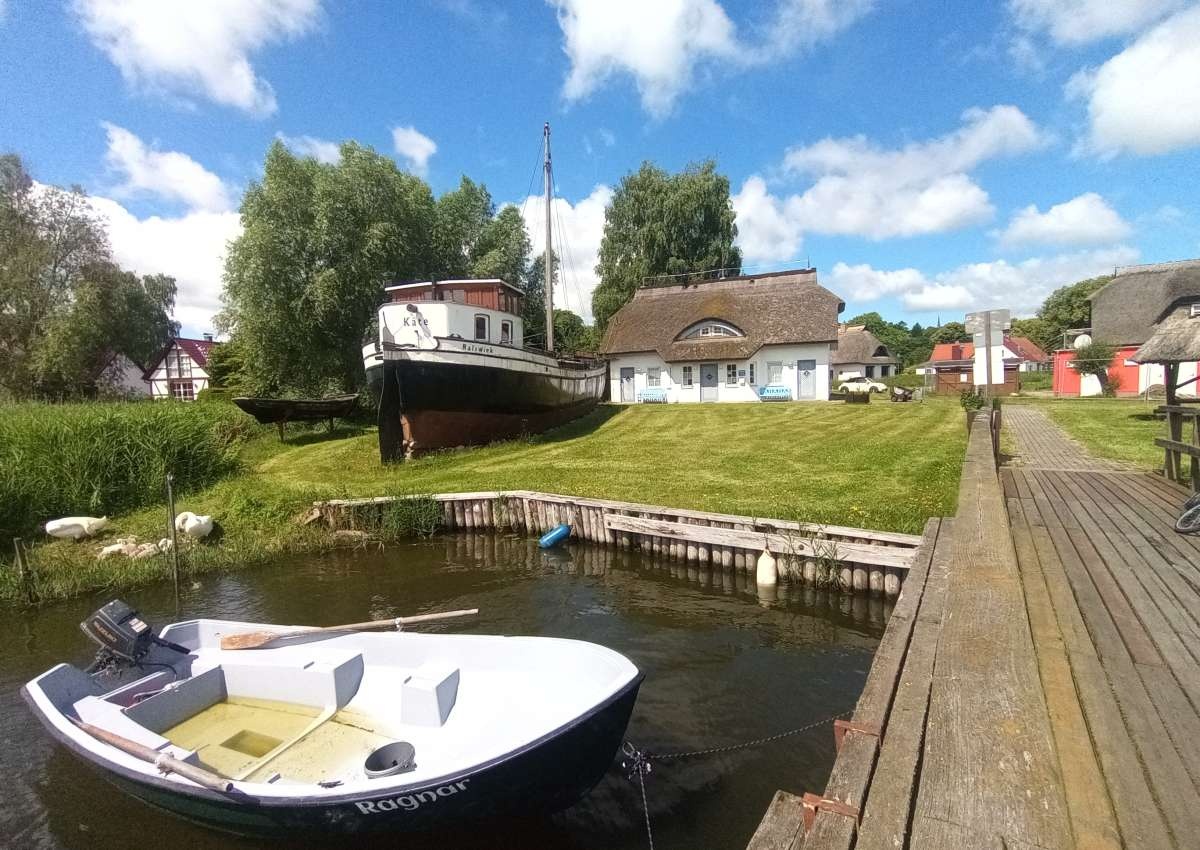 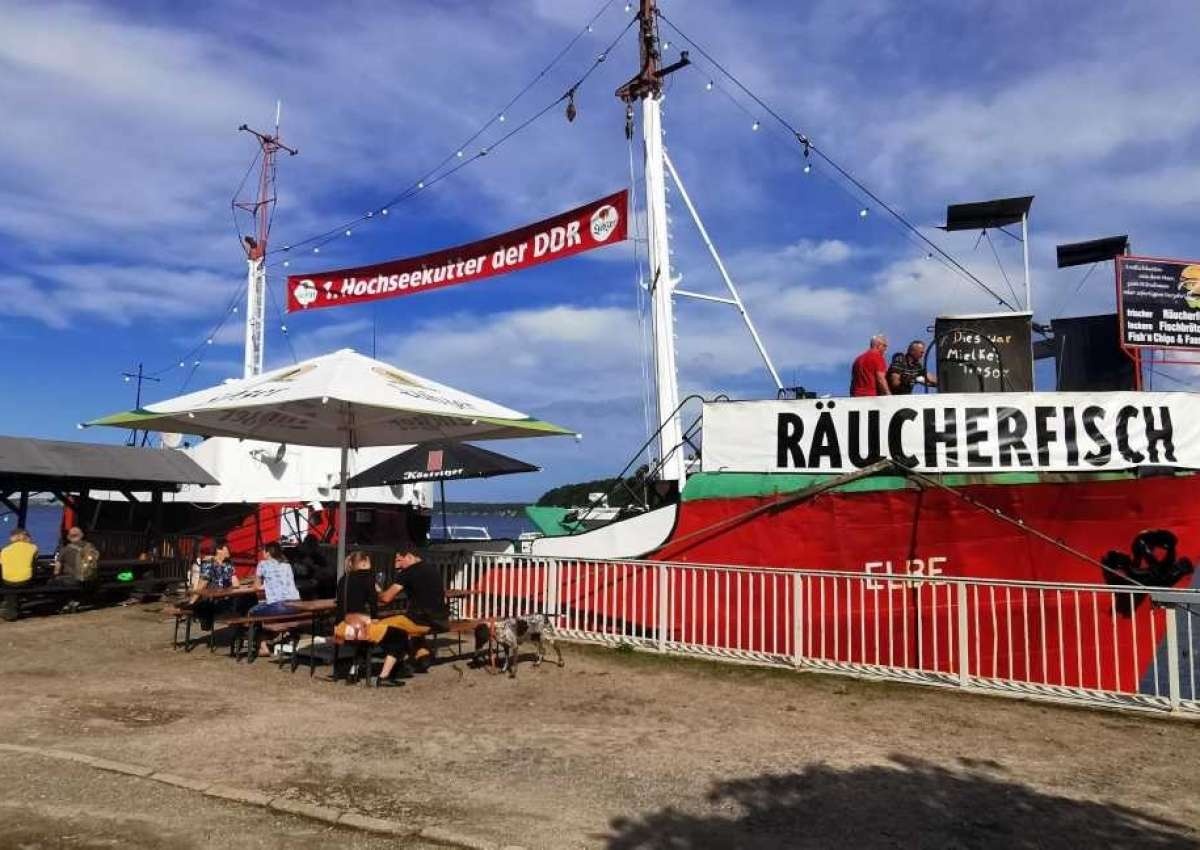 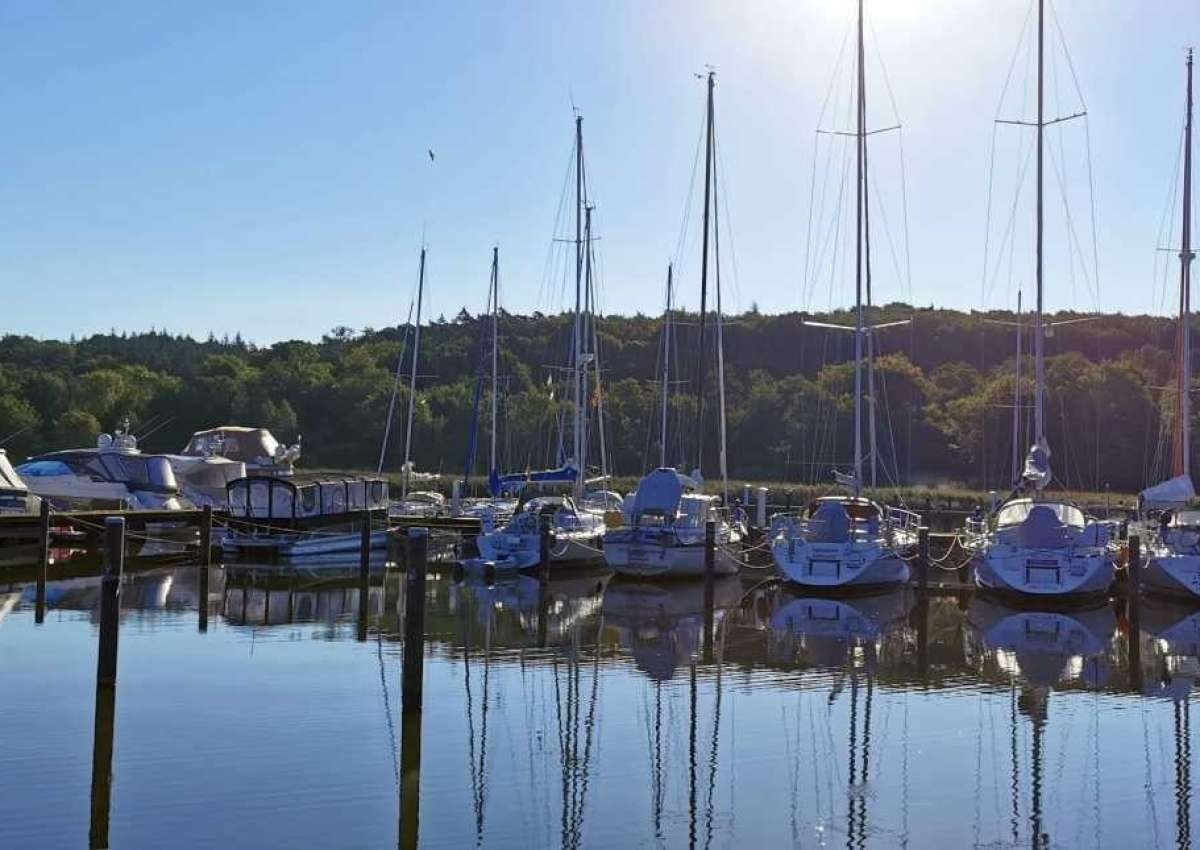 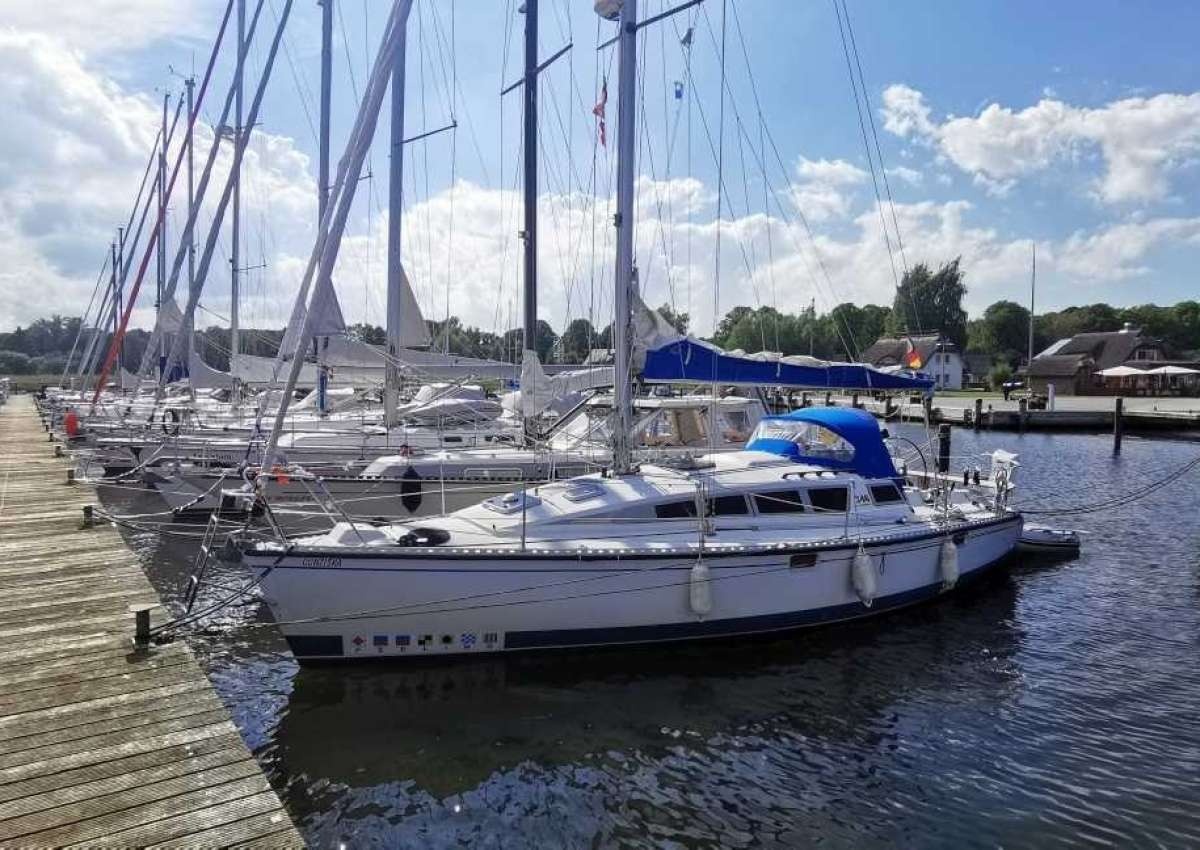 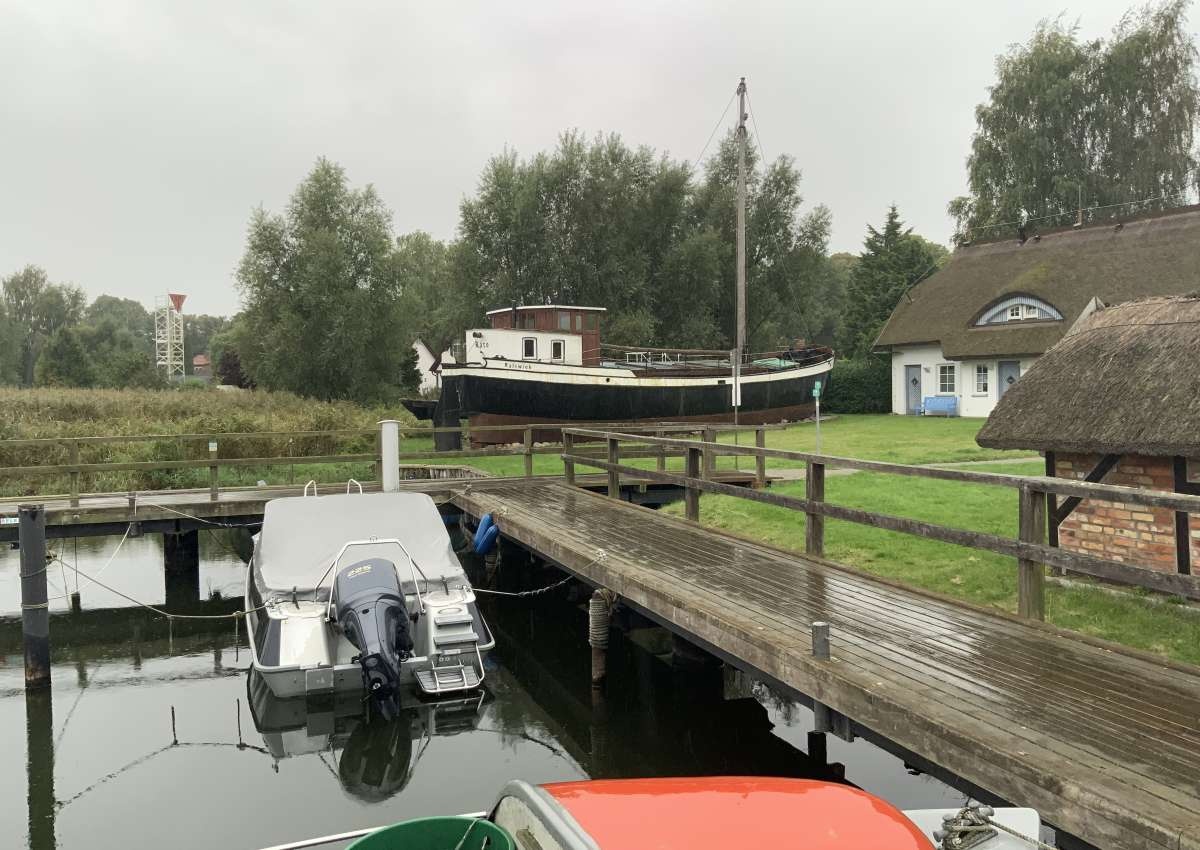 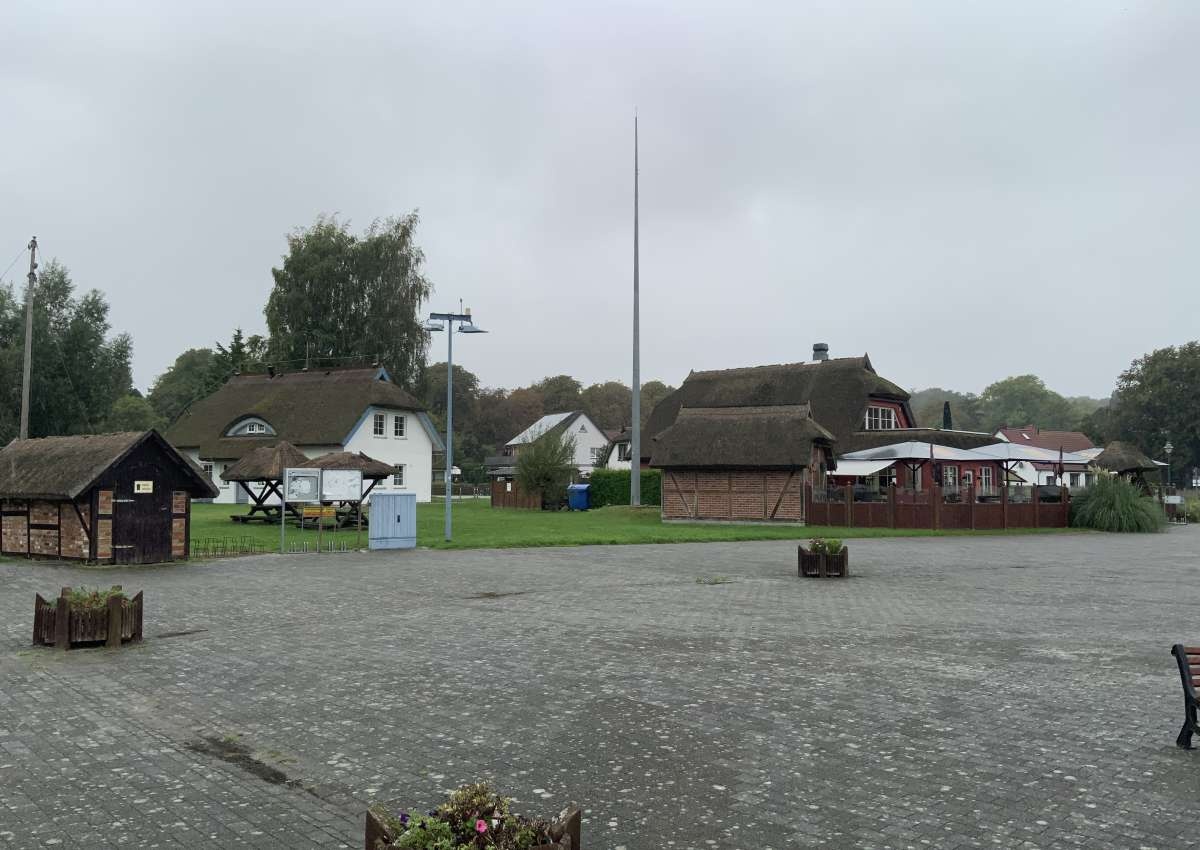 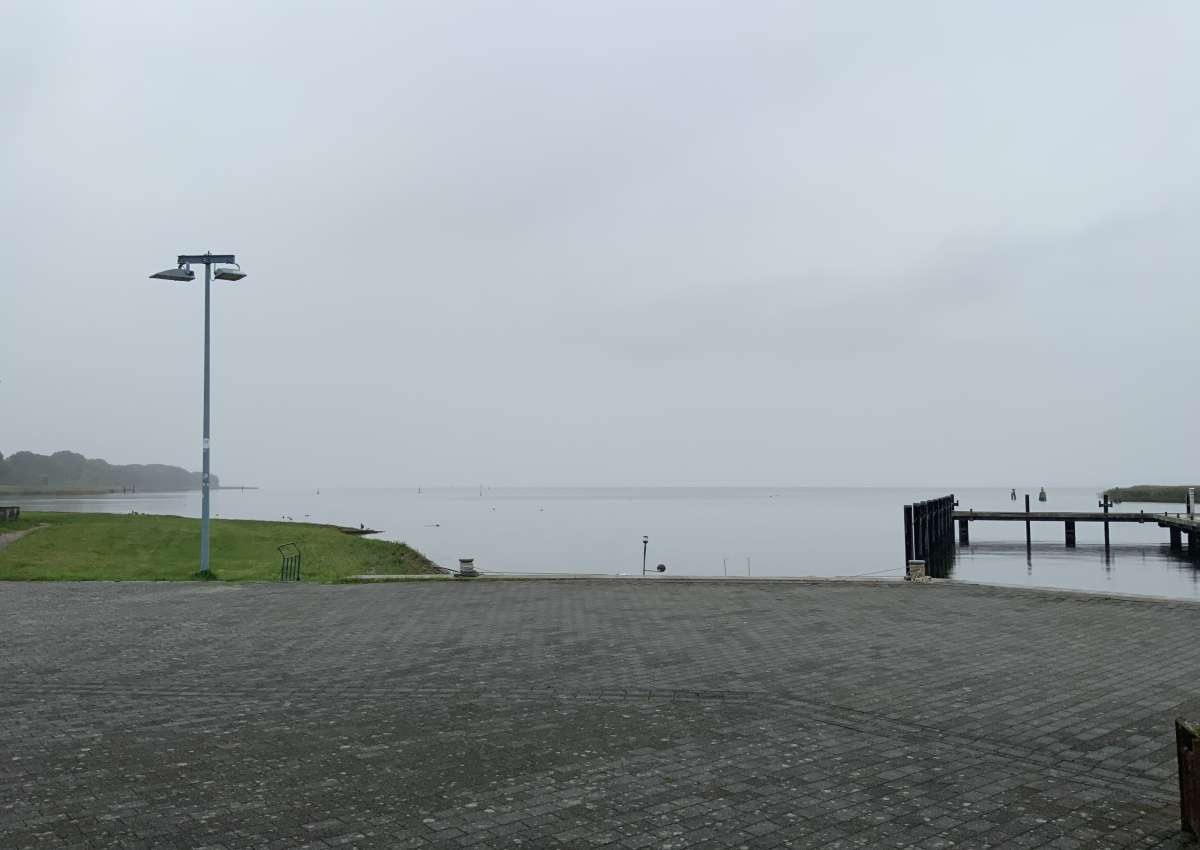 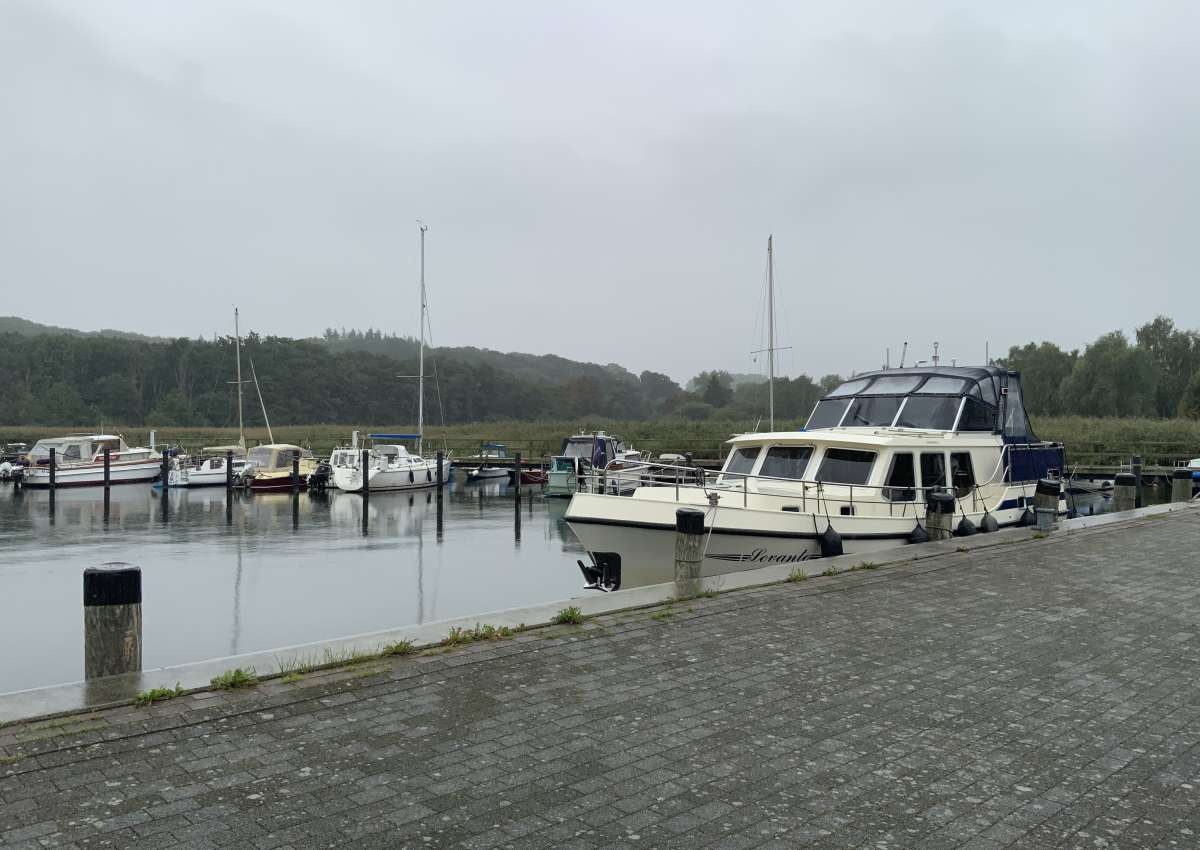 Situated in a beautiful landscape marina in the south of the Jasmund Bodden.

The approach is only possible during the day. It takes place from fairway buoy RW1 with 181° in the buoyed fairway up to the fairway buoys RW5/RW4. The marina is approached at 150° from the north buoy and then towards the conspicuous row of dolphins. About 20m before the dolphin, which is equipped with a pedestal, you then keep towards the jetty.

During rehearsals and performances of the festival (from June to September, daily except Sunday, 6 - 11 p.m.), an anchoring and navigation prohibition area is set up in the extended area of the festival grounds. .

A restaurant and limited utilities are located in the village. Children will find play facilities. The Störtebecker open-air stage nearby is worth a visit.

Unjustly, the Vikings alone have the reputation as  "powerful" seafaring merchants who dominated the Mare Balticum. Before and around the turn of the millennium, the Slavic Rans (also called Rugians) played no less important a role in Baltic trade. Feared as pirates and respected as traders, their influence was even reflected in the naming of a large area of the western and southern Baltic Sea. The Mare Rugianorum, the Sea of the Rügen Slavs, was the name given to their trading empire, and Ralswiek was their largest maritime trading centre.

Similar in size to Haithabu, the Viking trading centre on the Schlei (see: Haddeby), the trade relations of the Rugians of Ralswiek were as wide-ranging as those of the Schlei Vikings, with the Rans benefiting from kinship with Slavic tribes as far down as the Balkans.

Excavations provide evidence of both long-distance trade to northern Scandinavia and to Arab lands, and give some idea of how extensive the trade must have been.

Among the excavation finds is the largest hoard of 9th-century Arab silver coins yet discovered in northern and eastern Europe, presumably hastily buried before an enemy attack. On top of it lay the remains of a burnt house. It is not difficult to imagine the events associated with it 1000 years ago, nor the fate of the owner. For the 2000 coins and the arm ring weighing almost three kilos, he could have bought many horses, slaves and slave girls. But perhaps he would also have had to sacrifice a few of the slaves to show mercy to the gods, for their idols, which often had several heads, demanded more than just sheep, pigs or cattle. A sacrificial temple as in other Slavic settlements apparently did not exist in Ralswiek. The place of worship and sacrifice (see sketch) was located on the beach in the open air. The human and animal bones found indicate this ceremonial place as well as a burial ground nearby.

The further list of finds, most of which can be seen in the cultural history museum of Stralsund (and unfortunately not on site), is long. In addition to vessels made of fired clay, glass beads, bronze jewelry, grinding stones, arrow and spear points, and of course boats have been discovered. Not everything that was found was imported. So far a smithy and a basket weaver's workshop have been proven to have their own production sites. Wooden nails and grinding stones have also been found.

Experts regard Ralswiek as a site that holds far more than has so far come to light. It is therefore completely incomprehensible why a new single-family house settlement was built on the site where Slavic large boats and a burial ground had been uncovered only a short time before. It is even more astonishing that the boats were buried again! During gardening, it is said, the owners of the houses would constantly come across new relics of the trading place. In this context, it is surprising how small the current excavation area of the archaeologists is in view of the size of the former settlement.

In contrast to the trading place of the Vikings on the Schlei, Ralswiek was not protected by a wall, but was surrounded by water all around. It lay between the large Jasmund Bodden and an inland lake, which later silted up. The shape of the island dictated a more elongated arrangement of the settlement than its rival on the Schlei (see plan).

The size of the trading post can admittedly not be measured by today's standards. Barely more than 50 huts made of wood and clay with reed roofs stood scattered here between the shallow sand banks. A few fenced-in areas for the animals surrounded the dwellings. Around 15 boat moorings jutted out into the early medieval lake like the jags of a ridge. In between lay the boats with their sterns to the land.

Ralswiek was the most important Slavic trading post on the island of Rügen, but nowhere near as large and influential as the fabled Slavic trading town of Vineta, which lay beneath present-day Wollin.

Nearly 400 burial mounds can be found in the Ralswiek forest, the Black Mountains, most overgrown but recognizable as distinct mounds in the fields or at the edges of the forest. Elevated landscape points were often chosen for these tombs of Slavic princes or their Germanic predecessors so that the ruler would have a nice view after his death.

The Bronze Age burial site at Woorke (just under 5 km to the southwest) is particularly impressive, consisting of 15 mounds about seven metres high. It is overgrown with hawthorn, beech and oak trees. A beautiful hiking trail (from "Dat Eckhus") leads there. It branches off to the left after one kilometre from the road between Ralswiek and Gnies. After four kilometres you first reach Patzig, a village with a church worth seeing. In Patzig, you continue the path for about 500 metres to the west and finally to the hiking destination to the northwest.

Also, if you walk north-east through the forest of the Black Mountains at the harbour, you will come across the barrows, which were erected with tremendous effort. On small tree trunks the builders of the graves rolled the boulders pulled by horses to the burial place. Here, then, with horsepower, muscle, and head, they proved that they already understood something about leverage.

For ordinary mortals, no boulders were piled up. They were laid to rest in the burial grounds of Ralswiek. But they too were given grave goods such as weapons and food for life in the afterlife. The cultural history museum in Stralsund uses the example of Ralswiek to illustrate the disintegration of tribal society and the slow development of an early urban community. With the conquest of the temple castle of Arkona (1168), however, the prosperity of this maritime trading centre on the Great Jasmund Bodden also came to an end and the Bishop of Roskilde ordered a provostry to be built in Ralswiek. From then on, until the Reformation, the church made its peace with the sea trade and watched over the fact that no more human sacrifices were offered to the pagan deities on the beach. The old provost building has been preserved.

For centuries, the von Barnekows resided in Ralswiek until one of the greatest feudal lords in the history of the island of Rügen found the manor to be befitting its status and bought it in 1891. Count Douglas had the present castle built in neo-Renaissance style by the Belgian architect Henry von de Velde in 1893. Most of the Art Nouveau interior has been preserved. The Barnekows' old castle still stands below the new one .

In GDR times, the castle was a retirement home, but today it has been renovated and the pile of coal on the terrace has disappeared. Hotel guests now sit here and drink their afternoon coffee overlooking the Wiek.

No less impressive than the castle is the setting for the Rügen Festival. 400,000 people were captivated by the Störtebeker spectacle from 1959 to 1961. The last new production on the natural stage was seen by a total of around 270,000 spectators, which speaks for the fascination of the figure of Klaus Störtebeker, often hyped up as the "Robin Hood of the sea". Störtebeker may have captured the imagination of poets, but there is little surviving record of his life and work. Among the few records is a Hamburg treasury account of the cost of the Likedeeler's execution and burial, and a remark in an old chronicle that the Likedeeler were declared birdless.

Likedeeler means equal divider. They are said to have divided their spoils not only among themselves, but also with the people. Let us believe it, for the story of an adventurer at sea who took from the power-hungry and gave to the poor is too good not to be true. And who does not know the legend of the execution of Störtebeker in Hamburg, who demanded to have all the Likedeelers survive whom he could still pass after his beheading. Then he is said to have managed to walk a few paces past his men without a head, and would probably have kept on running had he not been tripped up.

Likedeelers with nothing to lose are said to have been many of the Likedeelers. For a while they actually played cat and mouse with the powerful, only to be crushed between them. In 1390 the Swedish king Duke Albrecht III of Mecklenburg was at war with the Danish queen Margaret, and the Hanseatic League tried, more badly than good, to mediate. Alternately, the parties helped themselves to pirates (see Skanør) and had difficulty getting rid of them after the war. Störtebeker goes from hunter to hunted after the Danes and the Hanseatic League agree again.

Ralswiek is, all in all, a decidedly attractive travel stop. A local history memorial has been set up at the entrance to the set of the Störtebeker Games.