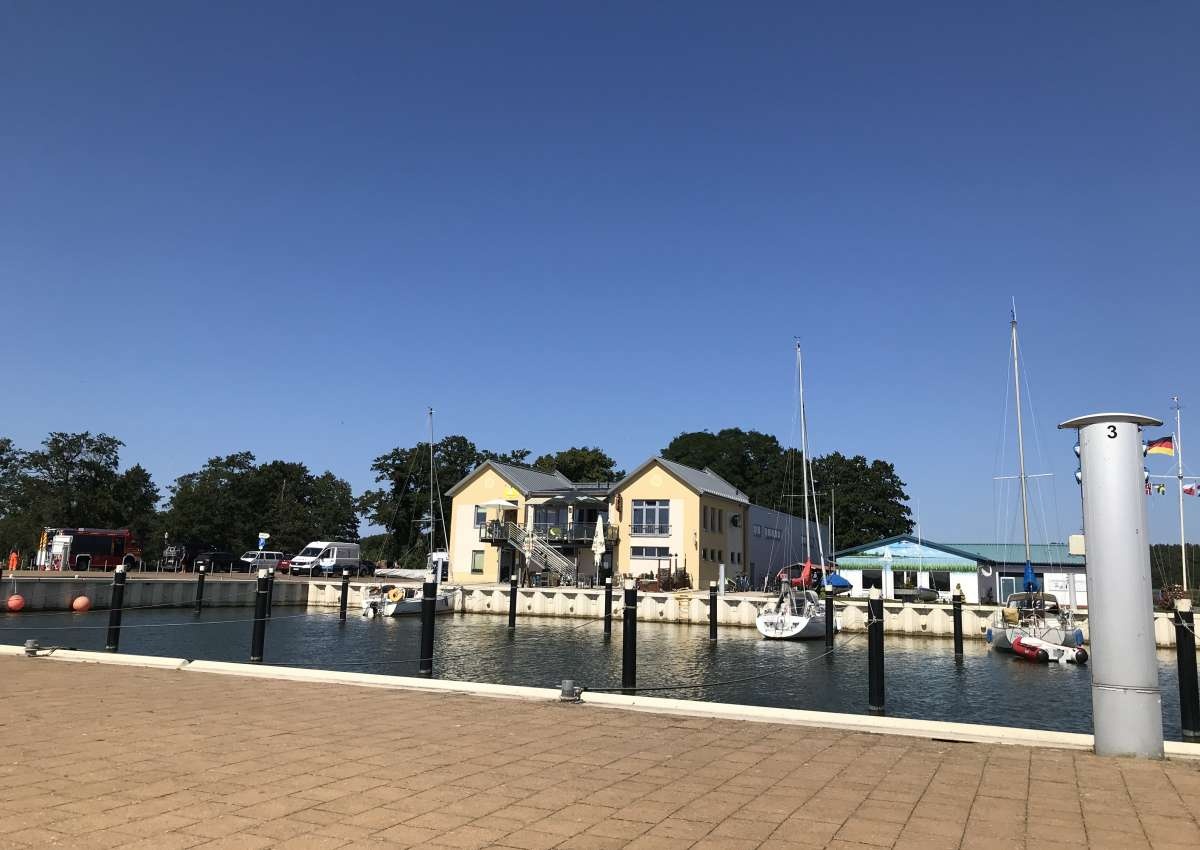 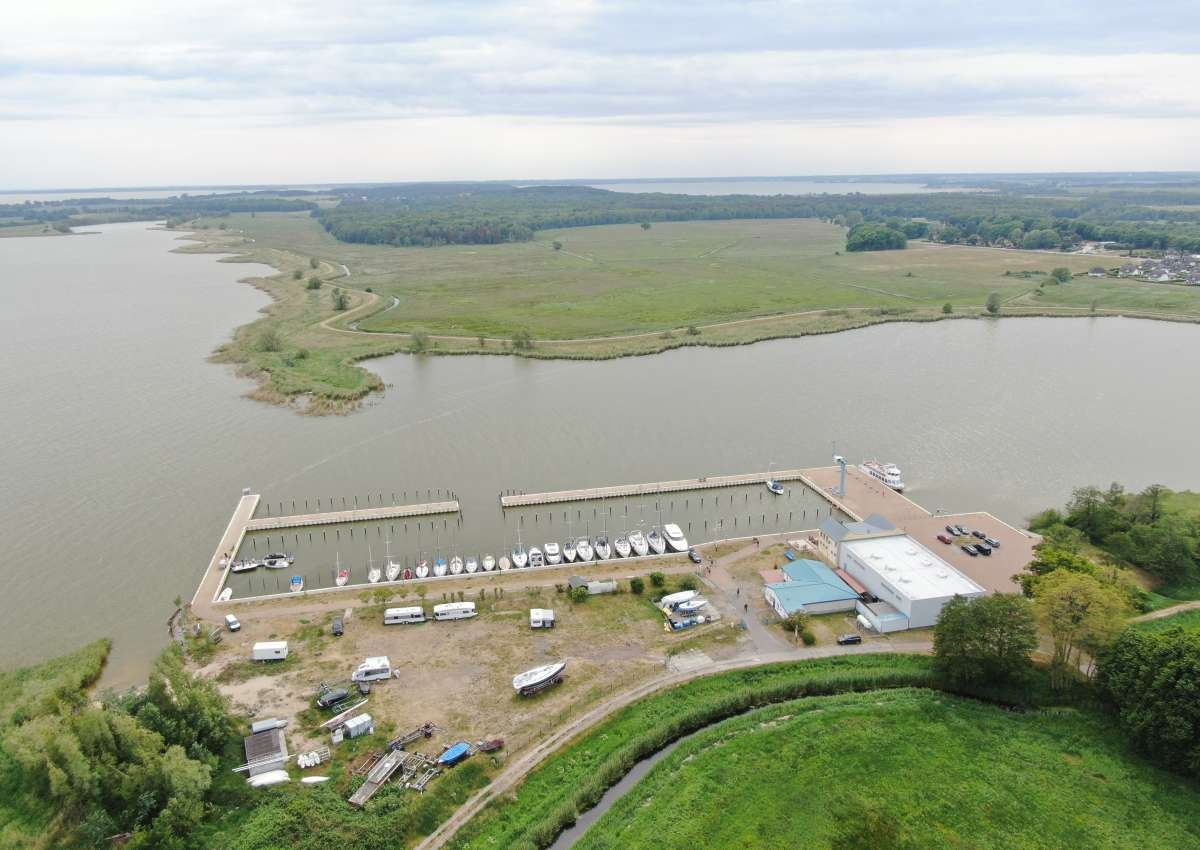 Modern, small marina in the northwest of the Achterwasser with 90 berths.

The approach to the harbour is only recommended during the day. From the fairway of the Peenestrom, past the buoyed shoals Hohe Schaar, Warther Haken and Trokkenort, you steer into the unbuoyed 2-3m deep Achterwasser.
After keeping well clear of the island of Görmitz, you run 310° towards the head of the passenger jetty and then turn to starboard into the harbour.

The harbour is occupied by local pleasure boats, but guests will always find a mooring after the expansion to a water recreation area. The water depth at the berths is 2.5m.

The north-western jetty, located outside the harbour, is reserved for passenger vessels.

The newly designed harbour still lacks a certain flair. The parking lot goes to the harbor basin.
A bistro and restaurant are available, good shopping facilities are nearby.

The epithet "bath of the working people" was given to Zinnowitz in SED times. For the party, the seaside resort was a prime example of how a place had to be geared towards workers' holidays and how the leisure facilities had to look. More than in Heringsdorf or Ahlbeck, the development from a former aristocratic seaside resort to a family seaside resort was emphasized in the flagship Zinnowitz.

Today's offerings in Zinnowitz hardly differ from those of other seaside resorts on the Baltic coast: seawater wave pool, disco, sauna, bowling alleys, carriage rides, table tennis, computer games, kiosks, beach chair rentals, bakeries, cafés and so on. Not to forget: the fine sandy beach along the promenade, where there is life all day long and the motto is "see and be seen". At the end of the pier you can dive into the underwater world with a diving gondola.

There is less of the Zinnowitz holiday hustle and bustle in the harbour on the Achterwasser. Two kilometers southeast of the main road, the Zinnowitz Yacht Club had created an oasis of tranquility, which unfortunately was not completely preserved after the restoration and enlargement of the harbor with the reopening in spring 2011

The highway coming from Wolgast passes the harbor's moorings at a distance of 500 meters, far enough to be protected from traffic noise. The advantage of this harbour is obvious: you have the choice of plunging into the holiday hustle and bustle, enjoying the tranquillity of the Achterwasser or exploring Gnitz on foot. The latter is the sparsely populated peninsula south of Zinnowitz.

Neuendorf, Netzelkow and Lütow are called, from north to south, the small settlements of the Gnitz, which offers the nature-hungry an excellent circular hiking route. The 32-metre high "White Mountain" and the megalithic tombs near Lütow, which historians regard as evidence that the Gnitz was one of the few habitable areas on North Usedom more than a thousand years ago, are suitable as two stage destinations. The land, rugged with numerous lakes, swamps, bogs and water arms, was dangerous terrain for those unfamiliar with the area and protected first the Germanic tribes and later the Slavs from raids for a long time. Later, the increasing silting up of the shallow water zones and wetlands deprived the inhabitants of their protection. The Slavs engaged in a battle with the Vikings, which they lost.

On the west side of Gnitz, a narrow sandy beach at the foot of the steep bank invites sunbathing.

Six kilometres southeast of Zinnowitz, Koserow, which emerged from an old Slavic settlement, and Streckelsberg are also tempting places to visit. The railway connection from Zinnowitz to Koserow passes the narrowest point of the Usedom land bridge at Zempin. The land connection between the south and north of the island measures just under 500 m here. Here was once a passage to the Baltic Sea, which was blocked by the Hanseatic League with sunken cogs, because the powerful Hanseatic League feared competition from farmers going to sea.

The cogs were rediscovered a few years ago, but regrettably not appreciated by the preservationists. Only in the garden of the late artist Otto Niemeyer-Holstein some frames of the Hanseatic cogs can be seen. The most famous artist of Usedom had settled in 1932 at the age of 36 at the narrowest place between the Achterwasser and the Baltic Sea. "Lüttenort" was the name he gave his new home on the road between Zinnowitz and the seaside resorts. The name came from a sailing boat that his father had once given him in Kiel, his birthplace, and which he had taken with him to the Achterwasser. He initially lived and worked here in an old S-Bahn carriage until he and his wife Annelise Schmidt had enough money to build themselves a house.

Otto Niemeyer-Holstein only achieved his breakthrough at the age of 60, after exhibitions in Kassel, Lübeck, Halle and Erfurt, following an eventful life. Until 1955, a constant lack of money forced him to lead a spartan life, but he always made his mark on it. In his younger years he travelled with his pilot cutter "Orion" as far as the Scandinavian fjords, later his voyages took him as far as China. One of the main themes of his pictures, which were created in nature and in his workshop "TABU", were the Bodden landscapes in the change of the seasons. Numerous portraits and nude drawings are also among the well-known works of the artist, whom the locals respectfully called the "painter-professor". If you want to know more about Otto Niemeyer-Holstein than a visit to his place of work can provide, we recommend a book with narratives by the artist: "Lüttenort" by Achim Roscher.

The strip of land near Lüttenort represents a sad chapter in the island's history. An endless minefield stretched out here, the clearing of which cost nineteen people their lives after the war. The "SS" wanted to blow up Usedom at this narrow spot in the last days of the Second World War, thus making two parts of the island so that the northern part could then be better defended.

"End moraine complex with cliff edge dune" is what geologists call the impressive and also legendary Streckelsberg. The highest elevation of the island, at only 60 metres, has been threatened by storms ever since stones from the offshore Vineta reef were transported to Swinoujscie for harbour construction in 1820. A seawall built to protect it from erosion in 1896 has reduced collapses on the cliff, but storms still successfully gnaw at Streckelsberg, which is a nature reserve known for a number of protected rare plants, including many species of orchids and hyacinths.

West of Streckelsberg, the so-called salt huts with "Fischerstuw" and a small historical fishing exhibition invite visitors to linger.

Medieval historians declared the area around the Koserow stone reefs to be the site of the sinking of the city of Vineta, sung about by its contemporary poets. In doing so, they supported the poetic idea of an unimaginably rich city whose citizens were punished for their extravagance with an even more unimaginable storm tide. To this day, the city, shrouded in legends, inspires the imagination, also as a lure for tourism, although it is now considered proven that the city, where people ate with golden spoons, can be found under today's Wollin. This cannot affect the imagination of those Koserower who have seen with their own eyes how Vineta rose for a few hours in ancient splendour from the floods. But she only does that every 100 years on Easter morning. And because the city also wanted to be taken care of under water, during the past centuries it let many ships smash against the Vineta rocks as if controlled by a magic hand and took its cargo into the depths. To the captains it must have been a welcome excuse.

The legend has it that a shepherd boy entered the city when it emerged from the floods before him one Easter morning, and the merchants offered him the most precious goods for only a penny. With that penny he could have freed Vineta and brought it back to the surface for good, but to the great disappointment of the inhabitants, the boy did not even possess a penny, only the clothes he wore on his body.

Koserow is also known as the parish where Pastor Wilhelm Meinhold had the idea for his "Amber Witch" around 1823 and became Usedom's most important poet with the novel. In old church books he is said to have come across a transcript that dealt with the burning of a priest's daughter as a witch. This gave him the idea of writing a novel about a witch and passing it off as a chronicle. His aim was to ridicule biblical criticism. In the end, however, he ridiculed himself and converted to the Catholic faith in protest. After all, the street leading to Streckelsberg has been named after him.