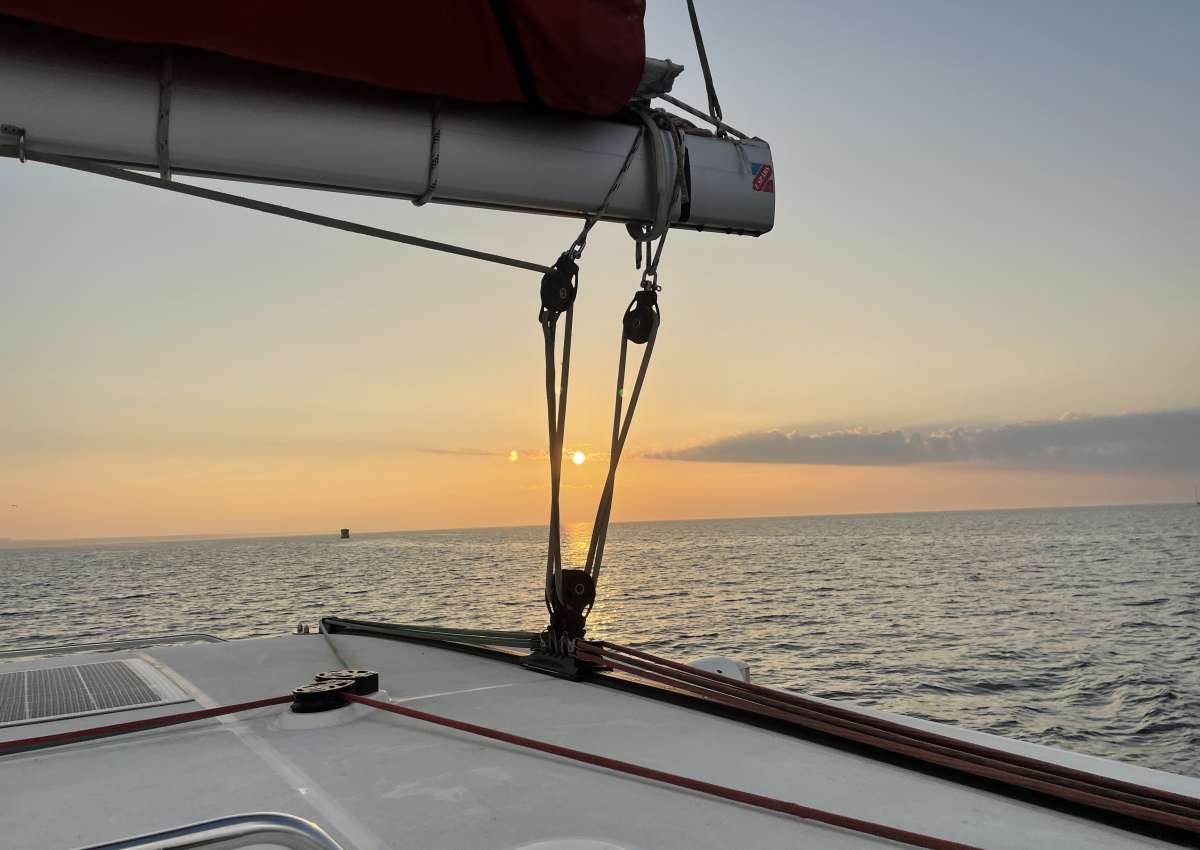 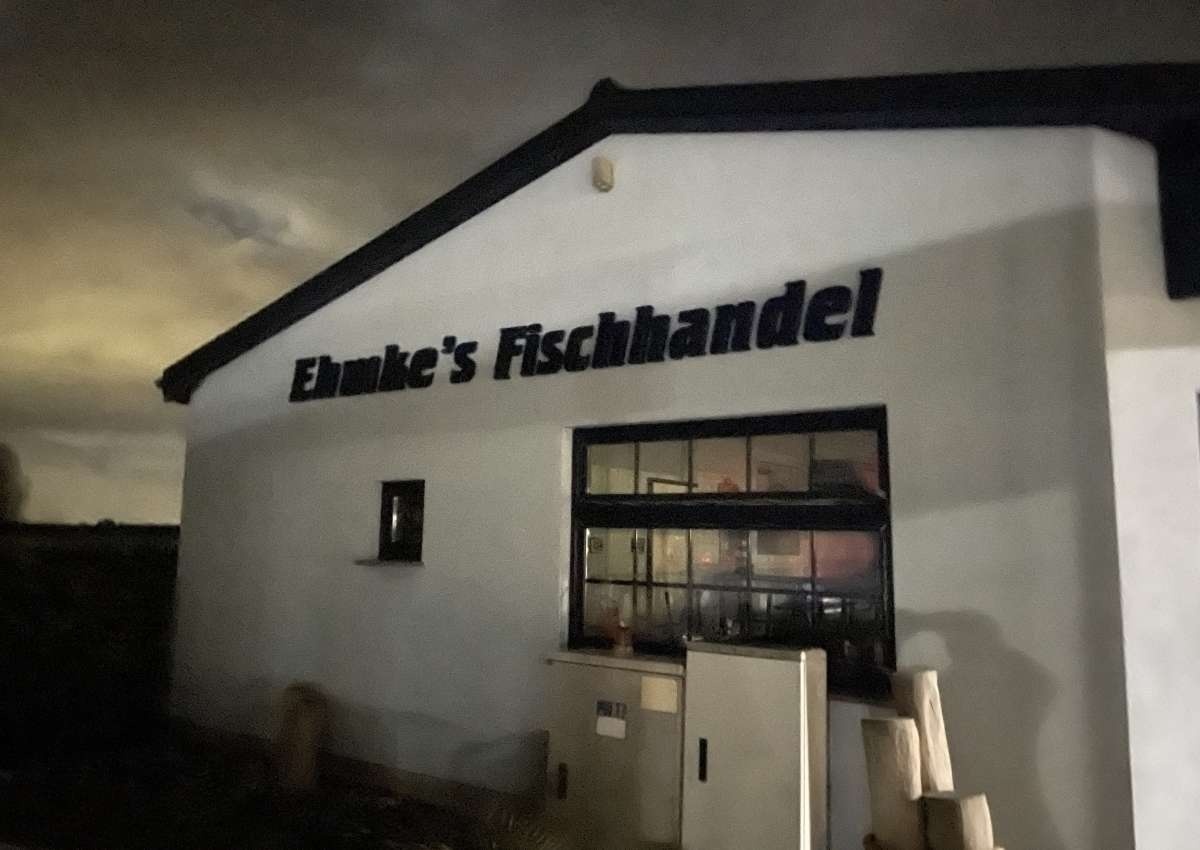 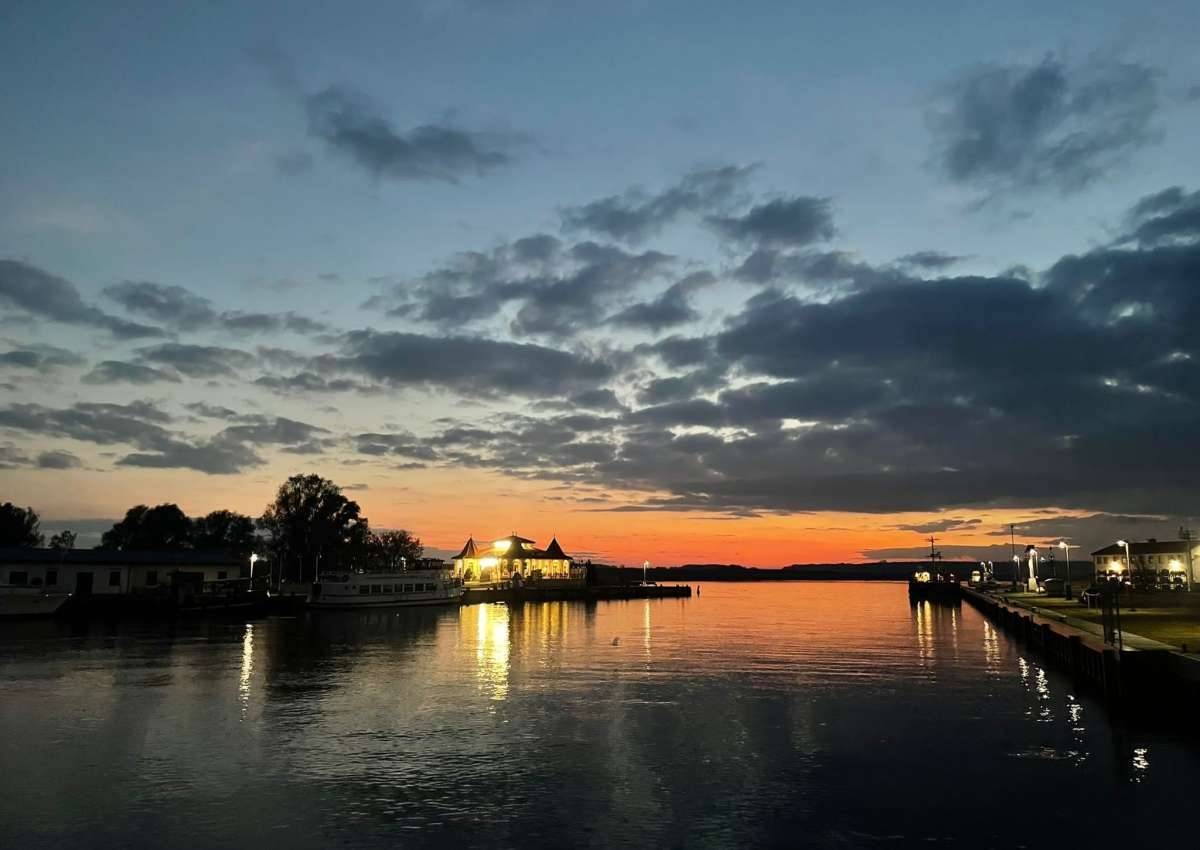 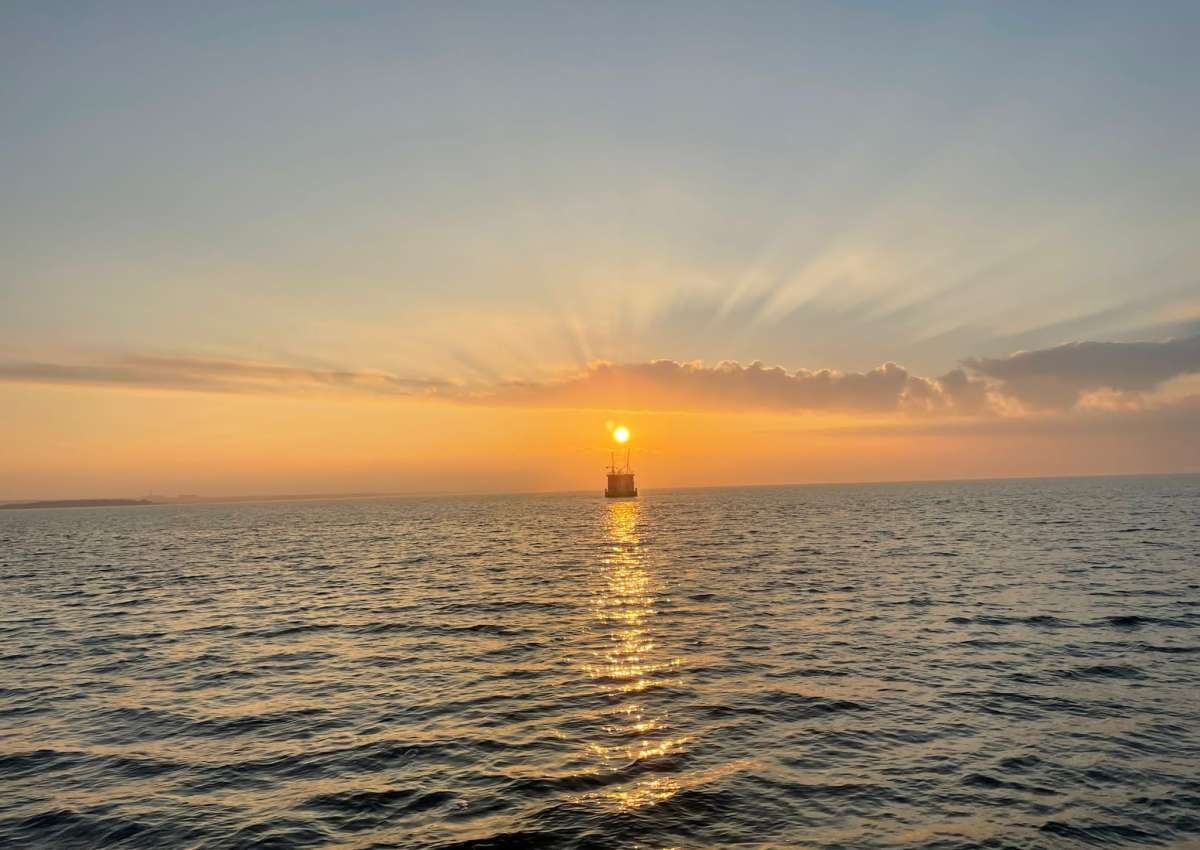 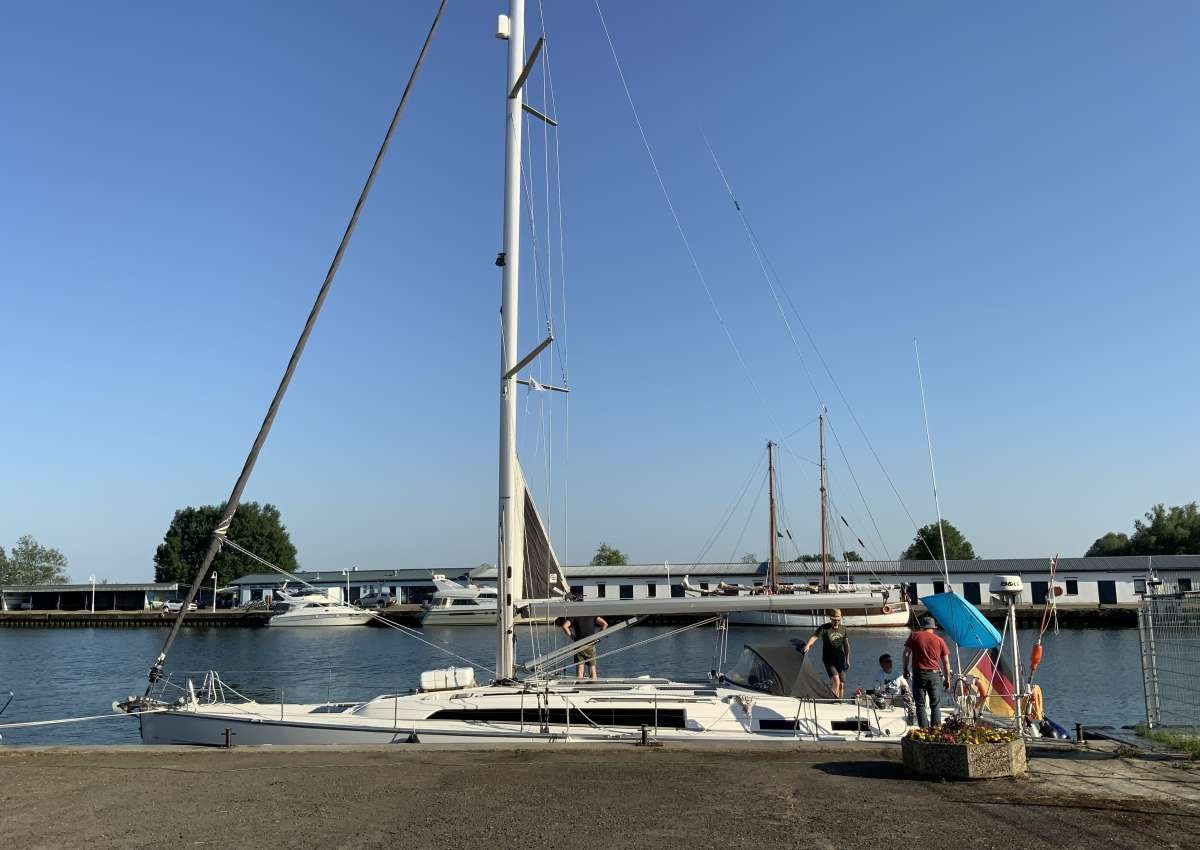 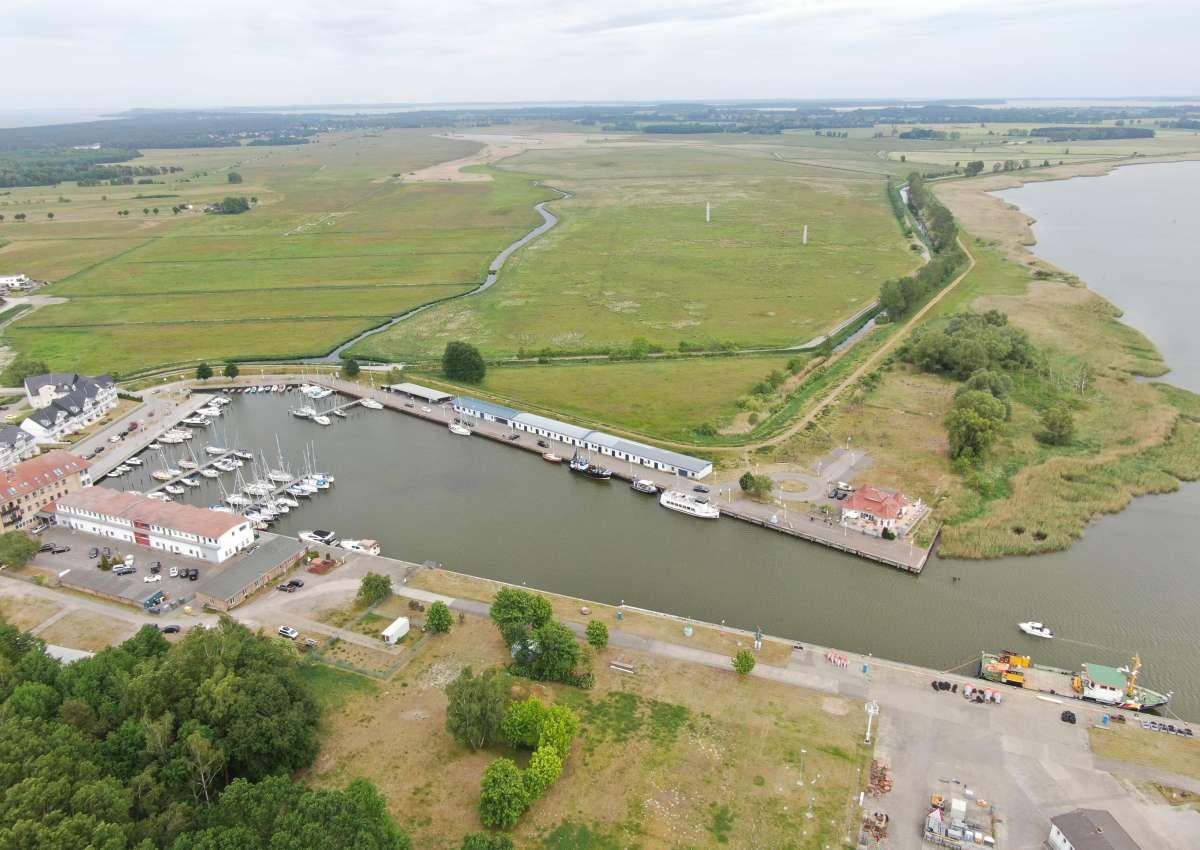 Well-developed fishing and yacht harbour with the buoy yard of the Stralsund Water and Shipping Authority in the northern part of the Peene River on Usedom.

The approach to Karlshagen is possible day and night due to the well buoyed and fired Peene current. Coming from the north or south, the port is entered at buoy 30/K2 to the east with 075°.

The harbour is partly occupied by vessels of the Water and Shipping Authority and fishing vessels.

The northern quay (with stern piles) is intended for pleasure boats. The water depth here is 3m.

The harbour offers good mooring possibilities and supply for sports boats. Further shopping facilities are located in Karlshagen, 1.5km away.

The large fishing port of Karlshagen is anything but a cosy place. Storage sheds, a smokehouse, a buoy yard and a radio mast catch the eye. For the rest, the fishing cutters, the barrel layers and the ships of the water and shipping office dominate the picture.

The village of Karlshagen, one kilometre from the harbour, has two faces, that of a small seaside resort with holiday home areas and that of a grey housing estate with barracks-style houses, in the northern part of the village.

The fancy fire station at the southern entrance to the village, on the other hand, is a pleasing splash of colour and the small seaside resort also has something to offer.

The memorial at the entrance to Karlshagen prepares visitors to northern Peenemünde for the dark side of the village, which became famous for the rocket testing facility of the Wehrmacht of the III Reich. The memorial is dedicated to the victims of the Peenemünde concentration camp and the resistance fighters. In 1943, the Gestapo had succeeded, via an infiltrated informer, in arresting more than 60 resistance fighters who had passed on information about Peenemünde "to the enemy."

The 1959 novel Island Without a Beacon, by Ruth Kraft, is a book on this subject. Although the content mainly relates to the Nazi period, when the "wonder weapons V1 and V2" were built here, which would decide the war in favor of the German Reich. The scientists' conflicts of conscience, the war machinery and the resistance struggle were her themes, and she expresses her shock at the thousands of deaths at Peenemünde with the words, "Dunes around which the winds blow, be silent of all you have seen..."

For this goal, no expense was too high and no scientist too expensive. In underground far-branching facilities, 40,000 people, mainly prisoners from the concentration camp "Dora", are said to have worked under the worst conditions. The old fishing village of Karlshagen also had to make way for the new facilities.

Only a few managed to escape "from hell". For example, the aviator Mikhail Petrovich Dewyatev and a few comrades-in-arms managed to "capture" a Heinkel "He111" aircraft under dramatic circumstances. Although they were hit behind the lines by a Soviet anti-aircraft shell, they managed a belly landing. Dewyatev was unable to pinpoint the locations of the mass graves many years later because the facilities at Peenemünde had been blown up almost to nothing, and today the forest has spread where the graves lie.

10,000 specialists, including nearly 2,000 scientists alone, were involved in the V-weapons project under the strictest secrecy. Among them was the renowned Professor Wernher von Braun, who helped discover Peenemünde as a testing ground. Peenemünde's inhabitants were evacuated, the forest was bought and parts of Karlshagen were confiscated. Bit by bit the northwest of Usedom was converted into a fortress. Parts of the northern tip of Peenemünde could even be flooded to deceive the attackers from the air with a different view of the island.

But the elaborate operation turned out to be more time-consuming than the "Führer" had imagined. The first reports of success came only when the tide began to turn in favor of the Allies in 1942. Adolf Hitler ordered the mass production of the rockets, whose material often could not withstand the heat generated when penetrating the layers of the atmosphere. Every third or fourth rocket exploded before reaching its target. The Allies' most massive counterattack on the night of August 17 and 18, 1943, turned into an inferno, killing over 2,000 people alone, including hundreds of forced laborers (including women and children). 700 bombers and night fighters unloaded their entire bomb load over Peenemünde and Karlshagen in only half an hour. Many buildings including the beach colony and Karlshagen itself were reduced to rubble. The phosphorus bombs left people burning like torches. Survivors report of cruel scenes. Afterwards, Peenemünde was "cleaned up" and rocket production was moved to central Germany. Nevertheless, further bombing raids claimed even more victims. A major attack hit the communities of Peenemünde and Karlshagen hard in July 1944. Thousands of people also died in England as a result of the rockets. Of the 12,000 V2 rockets ordered by Hitler, over 1100 reached their targets there.

The "Historisch-Technisches Museum Peenemünde" has become a highly worthwhile "open-air museum", where a visit is well worthwhile. On a large exhibition area, documents, original parts, interviews with contemporary witnesses, documentary films and models show in historical context the path of the rocket pioneers via civilian space travel to the systematic development of the first large military rocket in Peenemünde as well as its series production and wartime use. The power station of the former Peenemünde experimental facilities, which can be individually entered, is part of the exhibition and, as the largest technical monument in Mecklenburg-Western Pomerania, complements the attractions. A signposted circular route to authentic locations on the large site gives visitors a more comprehensive insight into the context of the former experimental facilities.

Impressive remains of the old high-speed rail link to Berlin can still be found in the forest north of Peenemünde. Although the rails of the four-lane line are missing, underpasses and platforms still exist. There are also huge cisterns that were used to regulate the groundwater level. Even a miniature Brandenburg Gate was built in Peenemünde. It was blown up after the war, as were the huge production halls, whose tiles still lie undamaged under the rubble. By looking at the various tree cover, it is possible to gauge the gigantic dimensions of the four halls.

In this sense, Peenemünde is a "sight to see"" that can be reached by island train.

You can also walk from Karlshagen to Peenemünde along the embankment on the Peenestrom, unless you prefer to get there by road on bicycles. An information board near the Karshagen fire station provides further information about the seaside resort, which has no sights of its own. We recommend a hike along the embankment from Karlshagen harbour to southern Zercherin. The reward for the walk is the beautiful landscape of the Trassenmoor on the left and the view of the Peenestrom on the right.