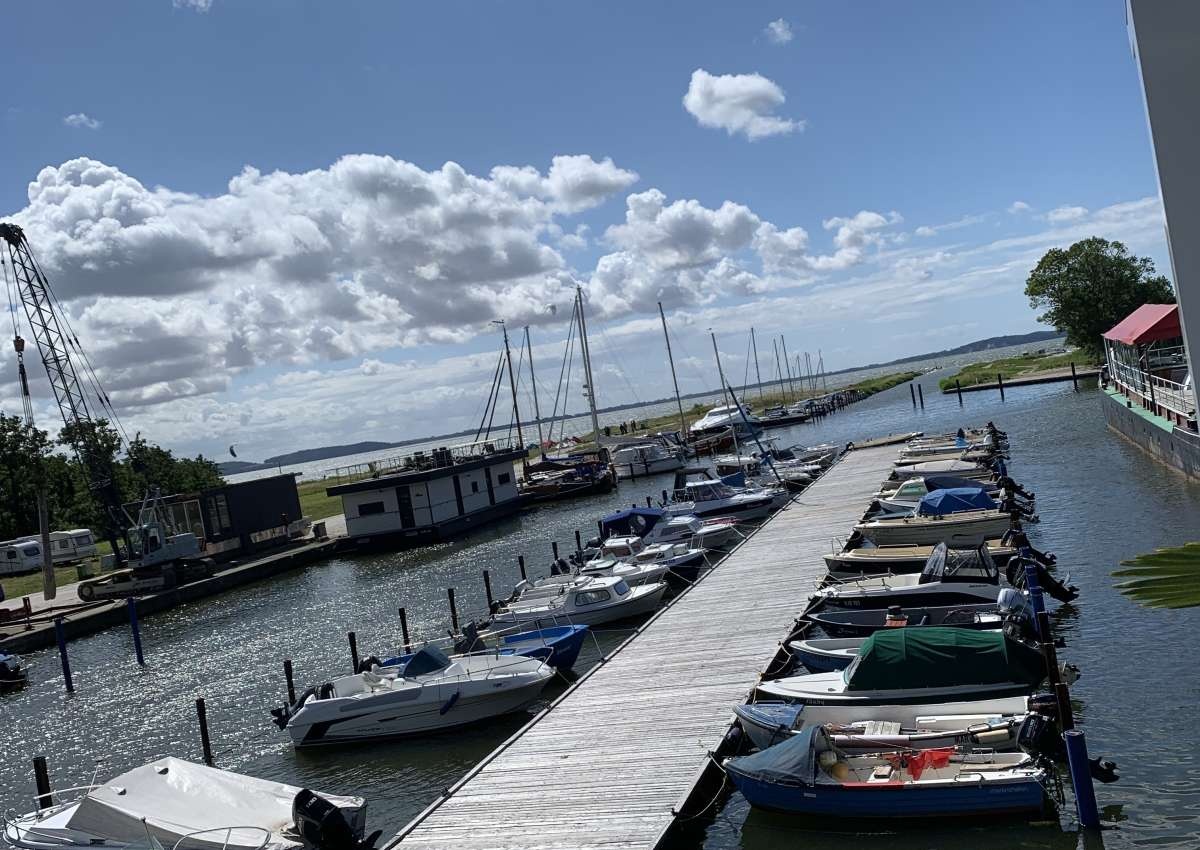 Canal-like sports boat harbour on the eastern shore of the Great Jasmund Bodden.

For those not familiar with the area, the approach is only recommended during the day. It takes place from buoy "Jasmund" with 090° in the fairway, which is only buoyed on the port side, towards the middle of the 15 m narrow harbour entrance.

The entire north side of the harbour and the pier jutting west into the harbour are used by local anglers and pleasure boaters . At the
southern pier moorings at 2 - 2.5m water depth.

There are sanitary facilities (WC only) and a kiosk. The nearest shopping facilities are in Sagard, three kilometres to the east.

The harbour is mainly occupied by motorboats. Only a few sailing yachts are moored here. However, that should not deter the sailing visitor from entering the canal-like harbour basin, which used to be used for loading chalk.  There are only a few houses in the immediate vicinity. The right spot to relax.

One of the plus points of Martinshafen is that it is located in a corner of the Great Jasmund Bodden that has so far been neglected by tourism. Thus, the hiking trail running parallel to the shore is one of the most beautiful on Rügen. It stretches over ten kilometres from the southern Lietzow to Glowe at the Schaabe and leads through a sparsely populated landscape. Martinshafen is almost exactly in the middle of this shore path, from which you can look out over reed fields to the Jasmund Bodden in many places.

The Spyckersche See and the Mittelsee (4 km north of Martinshafen) are scenic treats not to be missed. A narrow footbridge leads across the narrows between the two lakes. The 16th century castle located here  is the oldest secular building on the island of Rügen. The precious stucco ceilings, which remain hidden from the visitor, were commissioned around 1750 by the Swedish Marshal Carl Gustav Wrangel, after the Swedish Queen had given him Spycker Castle. Wrangel stayed here until his death.

The bricks of the castle, which has four round corner towers, are painted red. The residence has also been altered several times over the years, most recently during its renovation in 1968, when it was made into an FDGB recreation home. Today, the complex has been renovated and converted into a hotel. The country lane leading past the castle leads to the 60-metre-high Tempelberg and the fieldstone church of Bobbin.

The excursion to the Tempelberg lookout point is worthwhile because of the beautiful views of the Jasmund Bodden, the Schaabe, the Black Mountains (see Breege) and Cape Arkona. On a clear day you can see as far as the Hiddensee lighthouse.

Eastern Sagard, the second largest village on the Jasmund peninsula, boasts the remains of a Slavic castle rampart, a 13th-century village church, an old wooden windmill with truncated blades and what is said to be the largest Bronze Age barrow in northern Germany. Of these four historical relics, the "Dobberworth" grave, which is around 15 metres high, is probably the most impressive. It is located immediately south of the town (3 km east of the harbour) by the main traffic artery of Rügen.

The townscape of Sagard has suffered greatly from stereotypical new buildings. The old town centre, however, still gives an idea of why the island's first spa guests arrived here in the mid-18th century, before Putbus (see Lauterbach) became fashionable as a holiday resort. A "fountain, bathing and pleasure establishment" attracted visitors from 1794 onwards. Many of the guests saw a fountain of youth in the mineral spring of the place. It carried water containing iron and carbonic acid. But soon it was more about seeing and being seen than cures. With the end of the first health wave, the Sagard bathing business also ebbed significantly again around 1820.

Martinshafen, by the way, is also a suitable starting point for excursions to the Stubnitz Forest and the steep coast near Stubbenkammer, where Caspar David Friedrich painted his famous picture "Chalk Cliffs on Rügen" (see Sassnitz).