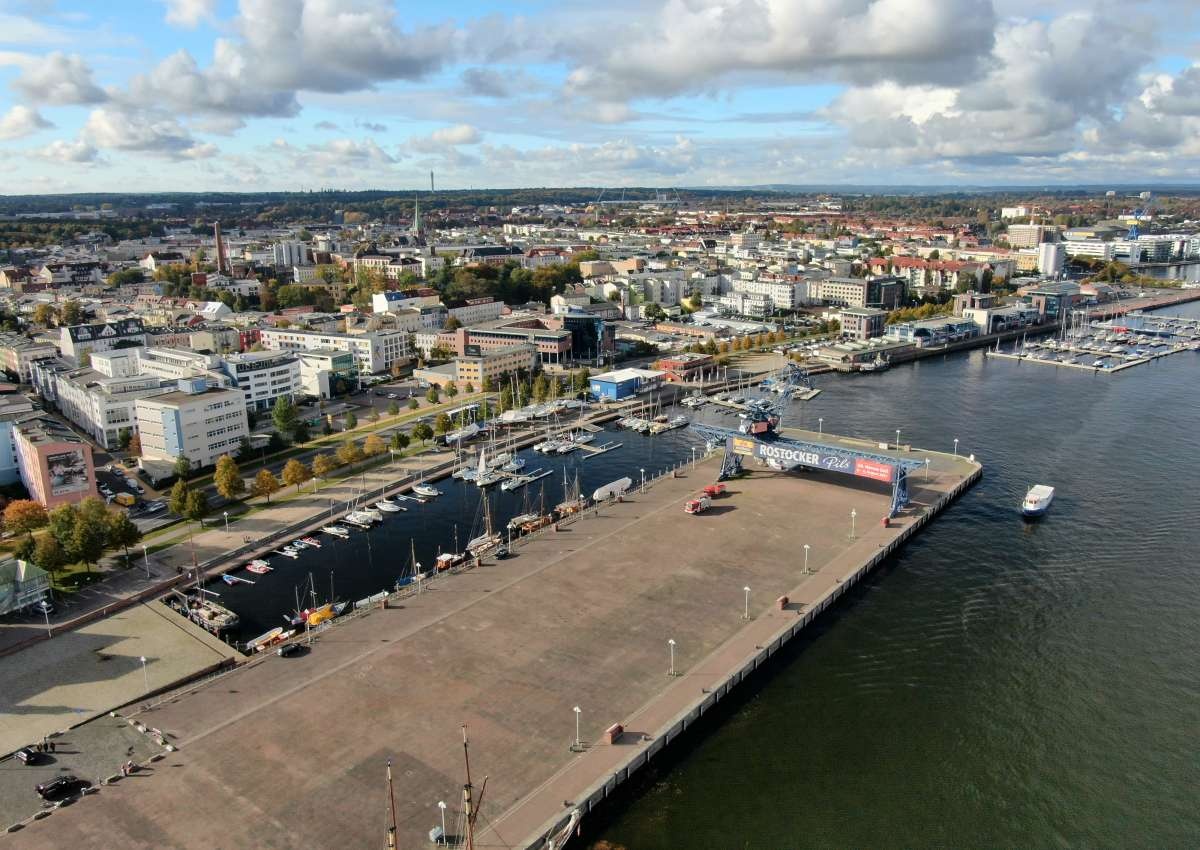 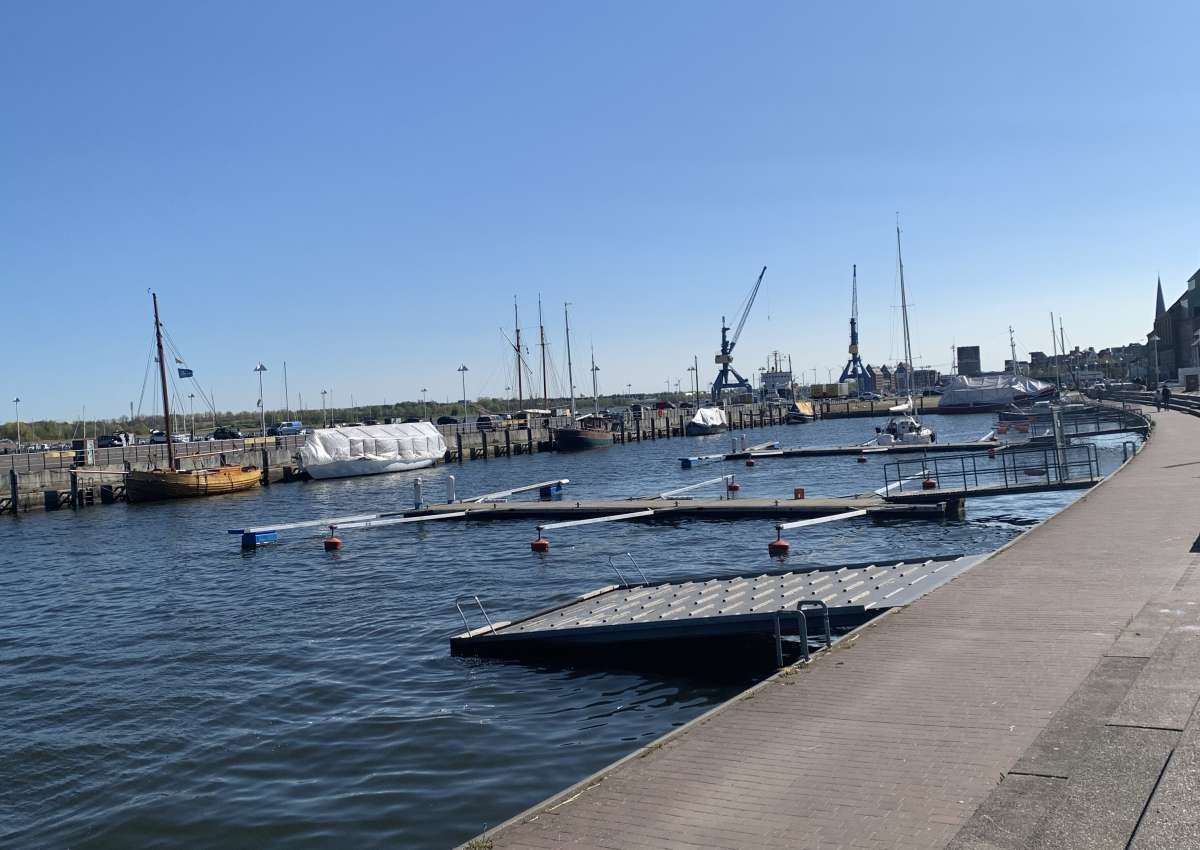 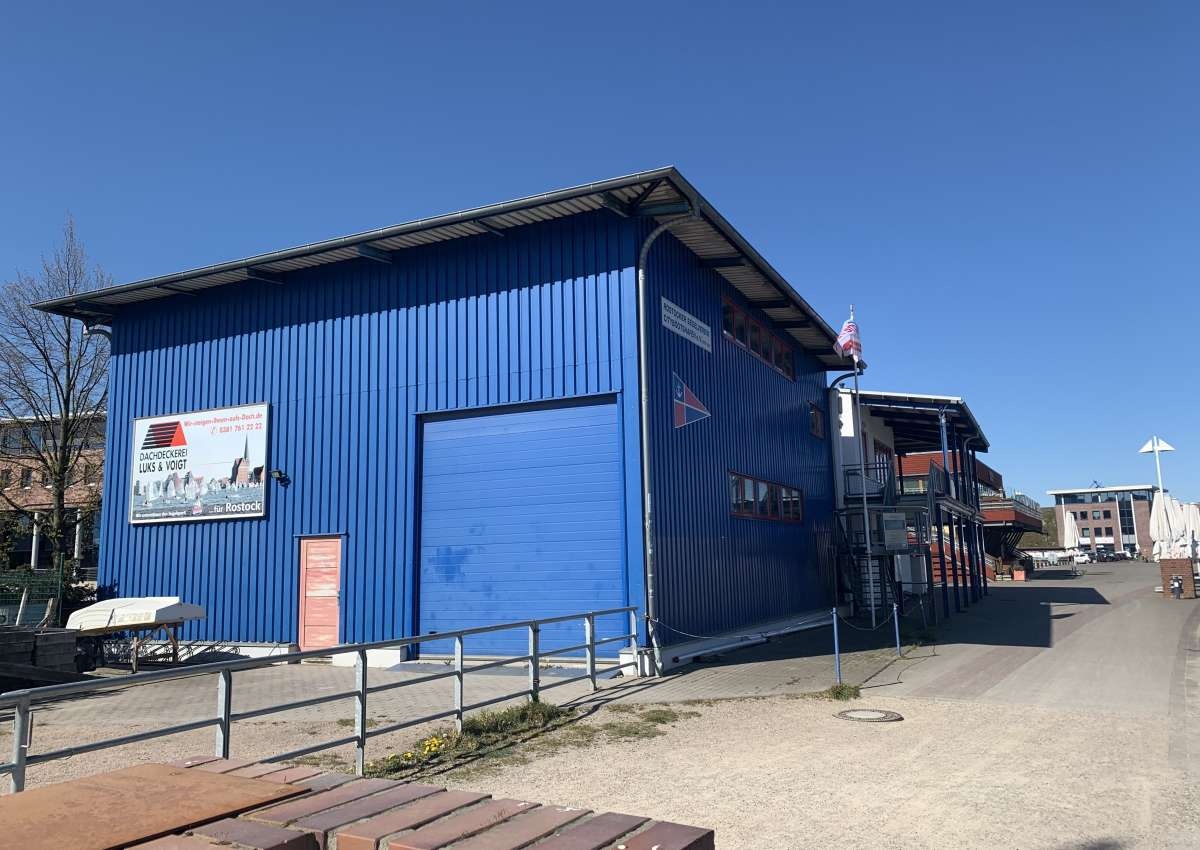 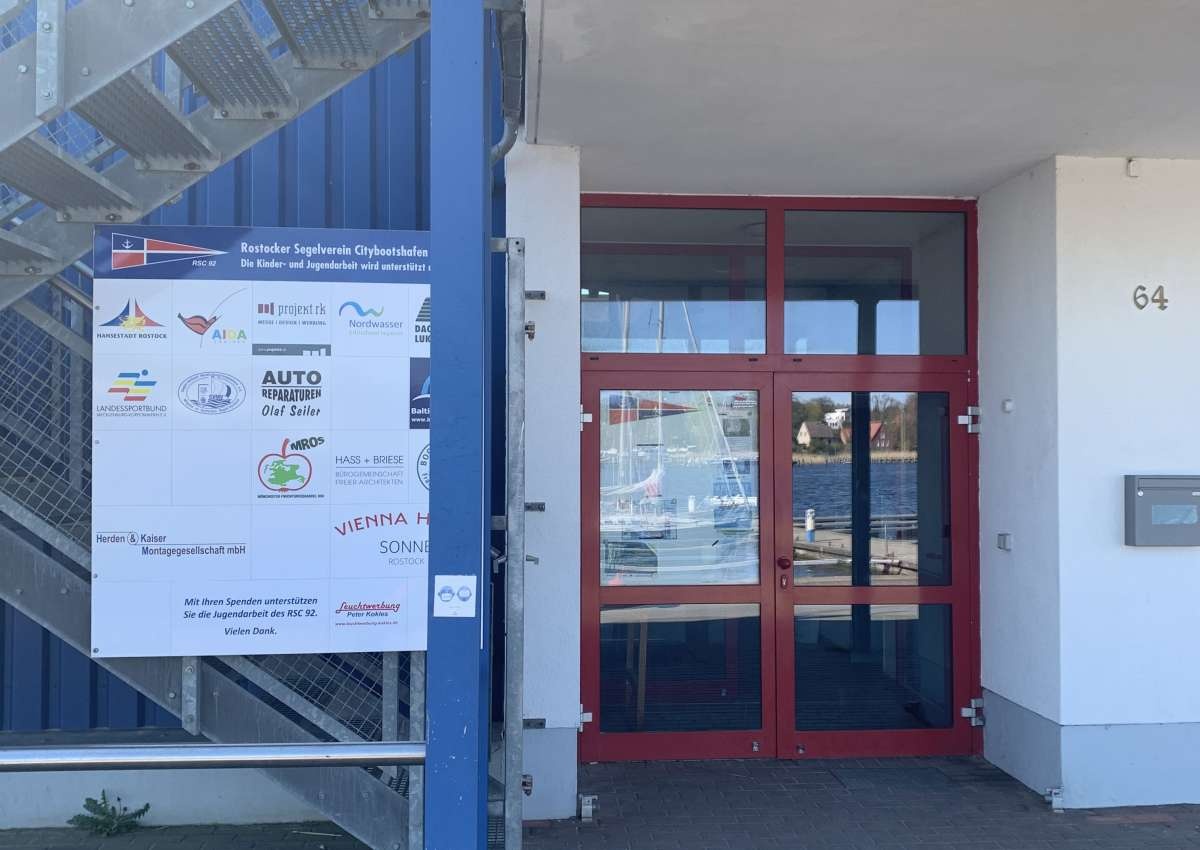 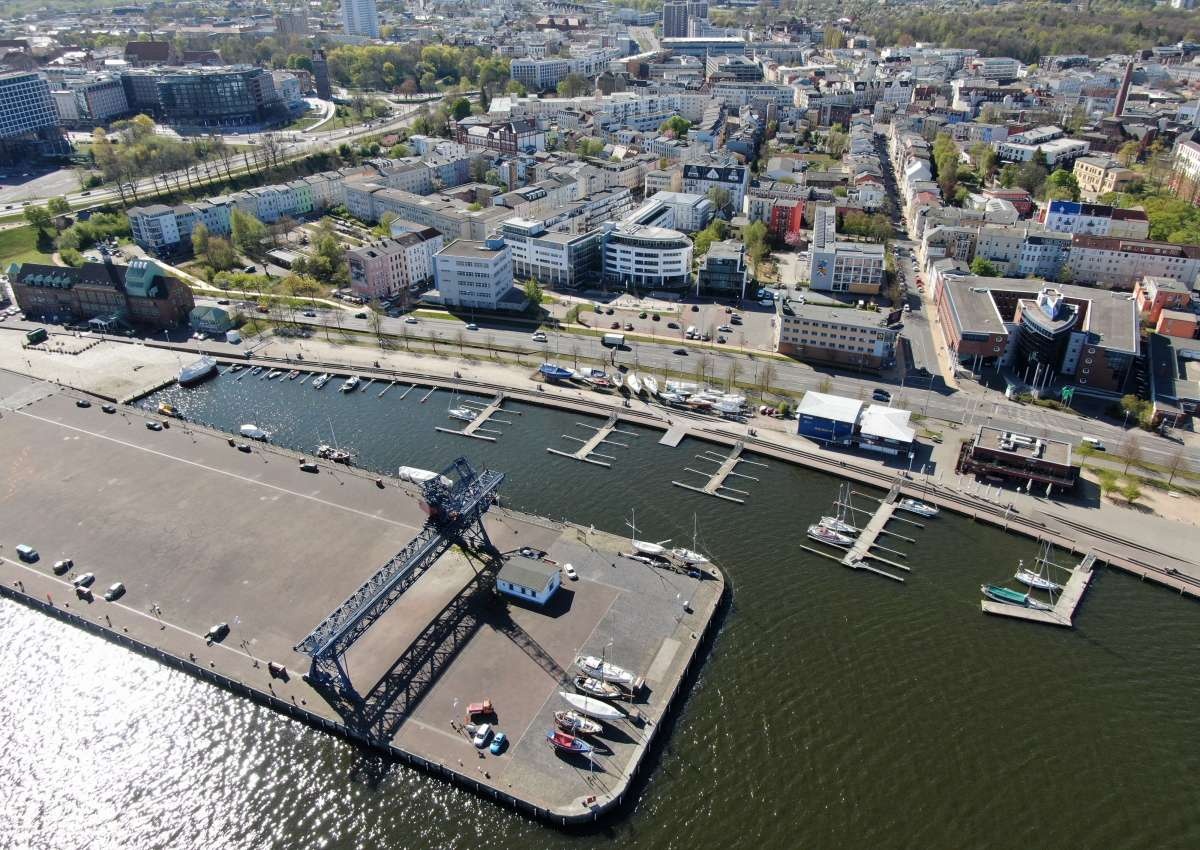 Sailing club harbour of the Rostock sailing club Citybootshafen and museum harbour close to the city, conveniently located and close to catering facilities.

The approach to the port is possible day and night. The fairway is well buoyed and lighted. Coming from Warnemünde you follow the fairway southwards until you reach Haedgehafen.

A major fire disaster in 1677 and devastating bombing raids in the Second World War have left very few of the historic residential buildings. The Rostock of late Gothic, Baroque and Neoclassical buildings is virtually non-existent. Today, the industrial and shipyard city of 200,000 inhabitants is primarily the most important seaport in Mecklenburg-Vorpommern for the handling of bulk and general cargo. In SED times, people spoke proudly of "our gateway to the world", where large freighters were loaded and unloaded in the fast roll-on-roll-off system. As far as passenger traffic for GDR citizens was concerned, however, the gateway to the world was not much of an issue. Freedom of travel was only granted for goods.

Today, if you want to get an idea of the cityscape of the once powerful Hanseatic city, which has historical parallels to the Hanseatic alliance partner Wismar, you only have to go to the municipal archives (Pümperstraße) or to the museum of urban history (see map) because of the few gabled houses that have been preserved. The approximately 19-metre-long picture scroll by the Rostock artist Vicke Schorler in the municipal archives is regarded as a unique testimony to the late medieval town. In addition to the representative buildings, more than 300 houses from the Hanseatic heyday are depicted on it in coloured pen and ink drawings. Further information about the rise and fall of Rostock as a Hanseatic city is provided by the museum in the Kröpelin Brick Gate in the west of the city.

South of it, part of the medieval city wall still stretches along the old ramparts. The pedestrian boulevard Kröpeliner Straße is the "tourist mile". A few gabled houses from different eras line the pedestrian zone and its side streets hold some sights. For example, the Kröpeliner Monastery of the Holy Cross, very close to the Kröpeliner Gate, houses the Museum of Cultural History, and to the east of it, in front of the university (at the corner of Kröpeliner Straße and Schwaansche Straße), stands a monument to the city's Great Son, Marshal Leberecht von Blücher, who distinguished himself as commander-in-chief of the Silesian army in the Napoleonic Wars and decided the 1815 Battle of Waterloo at Belle-Alliance, along with Wellington.

The "Fountain of the Joy of Living" in front of University Square is a meeting place for young and old. Here, where the two pedestrian streets (Breite Straße and Kröpeliner Straße) intersect, street musicians hold a rendezvous and Rostockers take a break from their stroll through the city in the cafés around the fountain. At the eastern end of the pedestrian zone, the town hall, St. Mary's Church and the Old Mint at Ziegenmarkt are only a few steps away from each other. The latter had the right to mint coins from 1325 to 1864, today offers a beautiful sight with its historic portal and houses a restaurant. The Gothic Church of St. Mary is known for its Baroque organ and astronomical clock, whose calendar dates back to 2017. The town hall on Neuer Markt, built in the 13th century, was only later given the show wall and the baroque porch was added at the beginning of the 18th century. Culinary delights are offered in the cellar of the town hall under the cross vaults. Besides the stately town hall with its turrets on the facade, the gabled houses behind the town hall are worth seeing.

If you are looking for more historic gabled facades, you will find them in Wokrenter Straße and Wasserstraße. In Lange Straße (northeast of and parallel to Kröpeliner Straße), Gothic style elements have been incorporated into the modern buildings, some appealing, some less successful. The historic town coats of arms can be seen on the rebuilt Steintor, south of the market square, in Steinstraße. The Kuhtor and the old parts of the city wall east of it date from the 13th century.

In addition to a visit to the city's theatres (north and south of the pedestrian zone) and the Kunsthalle am Schwanenteich, the Schifffahrtsmuseum in August-Bebel-Straße is a recommended destination. No less interesting is the shipbuilding exhibition of the traditional ship "Frieden" anchored in the district of Schmarl with the restaurant "Störtebeker". The aged 1000-ton pot from the childhood days of the GDR shipyard industry is also a technical monument.

A good overview of the cityscape is provided by city models in the tourist information centre, which is housed in a restored warehouse in Schnickemannstrasse. A few restored merchants' houses and the well-known inn "Zur Kogge" are nearby. With ship models, captain's pictures, lifebuoys and many other nautical props, the maritime milieu is underlined in the inn.