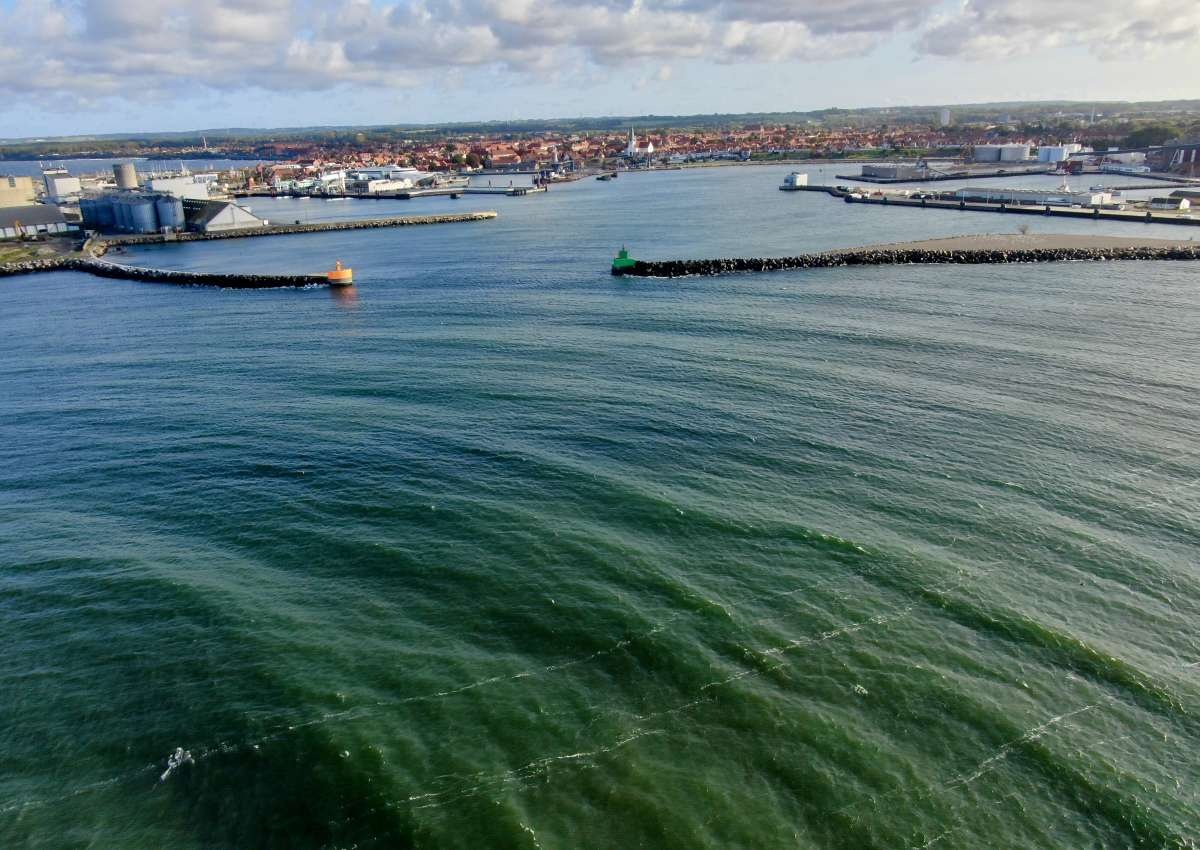 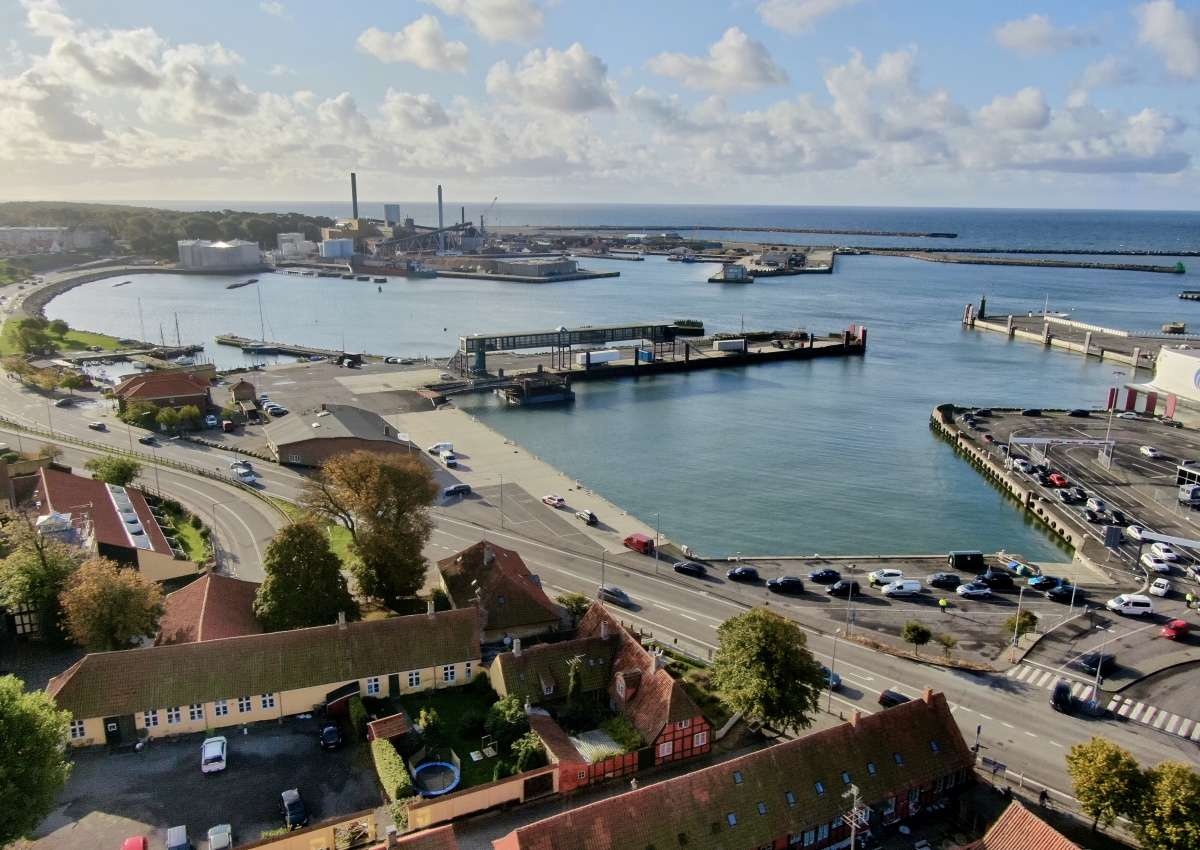 The approach to the fired harbour of Rønne is unproblematic day and night. The oil tanks and the church at the harbour are good landmarks.

Extensive construction work must be expected in the outer harbours during the next few years.

Very large yachts will find a berth in the North Harbour. However, yachts over 12m in length can also call at Nørrekås. In strong winds from the west, there is a swell in the harbour.

Sufficient berths - albeit somewhat out of the way - can also be found in the south harbour.

All supply possibilities are given (among other things customs office, yacht equipment and sailmaker's shop). Diesel can be bunkered in Nørrekås or in the south harbour, where you can also have extensive repair work carried out.

The 16,000 inhabitants of Rönne make up a third of Bornholm's indigenous population. Because there are few high-rise buildings and many single-family homes, the island's capital occupies much more space than other Danish towns with comparable populations. In addition, the number of city residents naturally increases during the season, when tourists arrive at the harbour or the airport. There are around 300,000 every year.

The city has never had any special trading rights. Unlike most other Danish islands, the people of Bornholm traded freely. The favourable location between Sweden and Germany made Rönne an ideal trading place for both sides. Large catches of herring and cod brought additional wealth. The importance of fishing is reflected in the town seal: three white cods in a blue field, above them the protector of all seafarers - St. Nicholas.

As a watchmaking town, Rønne was famous in the 18th and 19th centuries. The clock industry is said to have originated from the fact that around 1750 English ships were stranded with grandfather clocks on board. The clocks were taken apart, dried, reassembled and finally rebuilt. Around 1800, there were already 30 large clock-making workshops. Clocks "Made in Bornholm" became a byword for quality, but the good reputation of the clock industry was quickly wiped out when Bornholm clocks of inferior quality appeared on the market in the mid-19th century. Within a very short time almost the entire watchmakers' guild was out of work.

Pottery is also one of the old trades in Rønne. It is still booming today, unlike the watchmaking industry.

As with Neksø (see Neksø), Rønne was attacked by Russian bombers in 1945. After over 30,000 displaced persons and German soldiers had fled from the Eastern Front across the Baltic Sea to Bornholm, the German commander refused to surrender to the Russians. However, after the bombing raids, the Germans gave up and let the Soviet soldiers onto the island.

Despite the bombing, the town is still rich in beautiful old half-timbered houses. They are essentially clustered around the church that rises above the harbour. Although it dates from the 14th century, it was largely rebuilt in 1915. Illuminated at night, it is a particularly beautiful sight.

Among the buildings worth seeing are the old merchants' yards in Store Torvegade and at the corner of Nellikegade and Provstegade.

You should take a look at Karnapsgård (Gård = yard), by the church, Johnsens Gård by the harbour, the houses in the street Ved Brønden and the corner house Østergade-Kattesundet. The latter was built with stones from the ruins of Hammerhus. The main guardhouse (Hovedvagten) in Søndergade, now a summer restaurant and outdoor café, was also built in 1743 with stones taken from the ruins. Until the middle of the last century, the citizens' guard was located here.

In Storegade in front of the State School, two flat stones commemorate the spot where the Swedish commander Johan Printzenskjøld was shot by insurgents (see Hasle). According to a plan hatched by Bornholm freedom fighter and folk hero Jens Kofoed with the mayor of Hasle, the commander and the Swedes were brought down. The smaller stone is said to have been erected in memory of his faithful dog.

The half-timbered house Erichsens Gård in Laksegade, built in 1807, has been furnished as a middle-class residence of the previous century. Here, numerous exhibits commemorate the painter Kristian Zahrtmann and the poet Holger Drachmann, whose first wife, Wilhelmine Erichsen, was the daughter of the house.

The museum's geological and cultural-historical collections at 29 St Mortengade are worth seeing here, as are the works of Bornholm painters who came to the island for its special lighting conditions.

A trip to the round church of Nylars is recommended. It stands southeast of Rønne (see Arnager).

On the southern outskirts of town is Rønne Castle, built in 1688. It is the remnant of a building project that was intended to make Rønne a fortified town. However, the plan was abandoned during construction. Now the well-preserved site houses a military museum whose collections depict the island's military history from ancient times to the present. Old guns stand in nearby Kanondal.

The southern harbour is of special proportions by the standards of a Danish provincial town, thanks mainly to heavy passenger ship traffic. But the granite and fishing industries have also played their part in the enormous expansions of the harbour in recent years. The small boat harbour basin below the church is often overcrowded. The northern harbour of Nørre Kås was built exclusively for yachts.