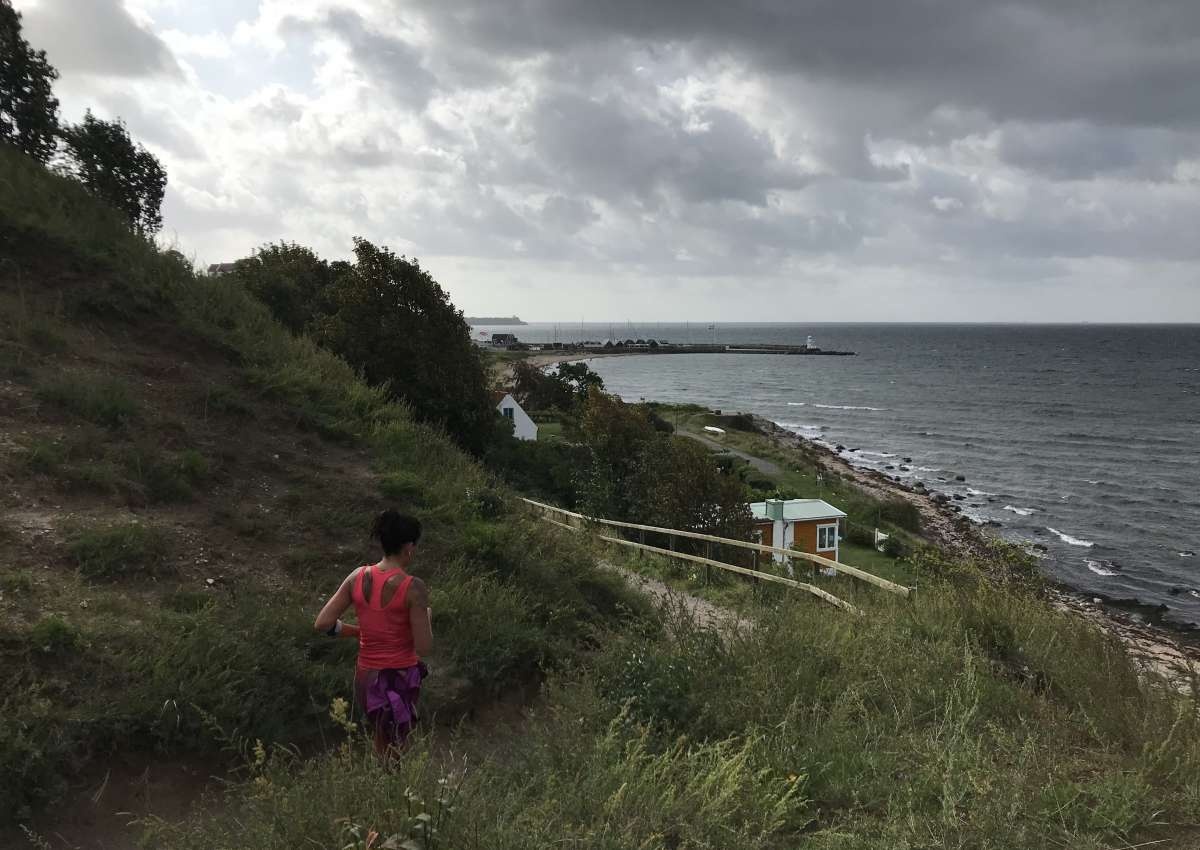 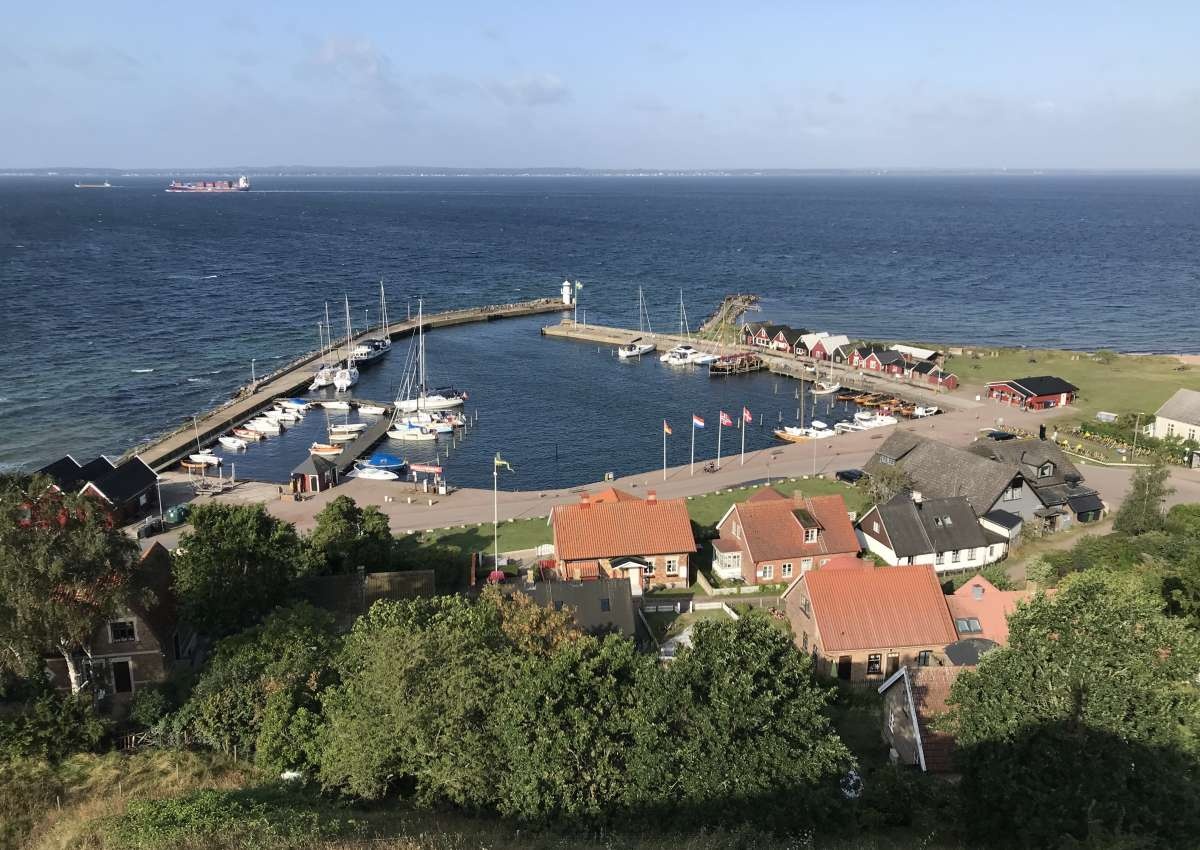 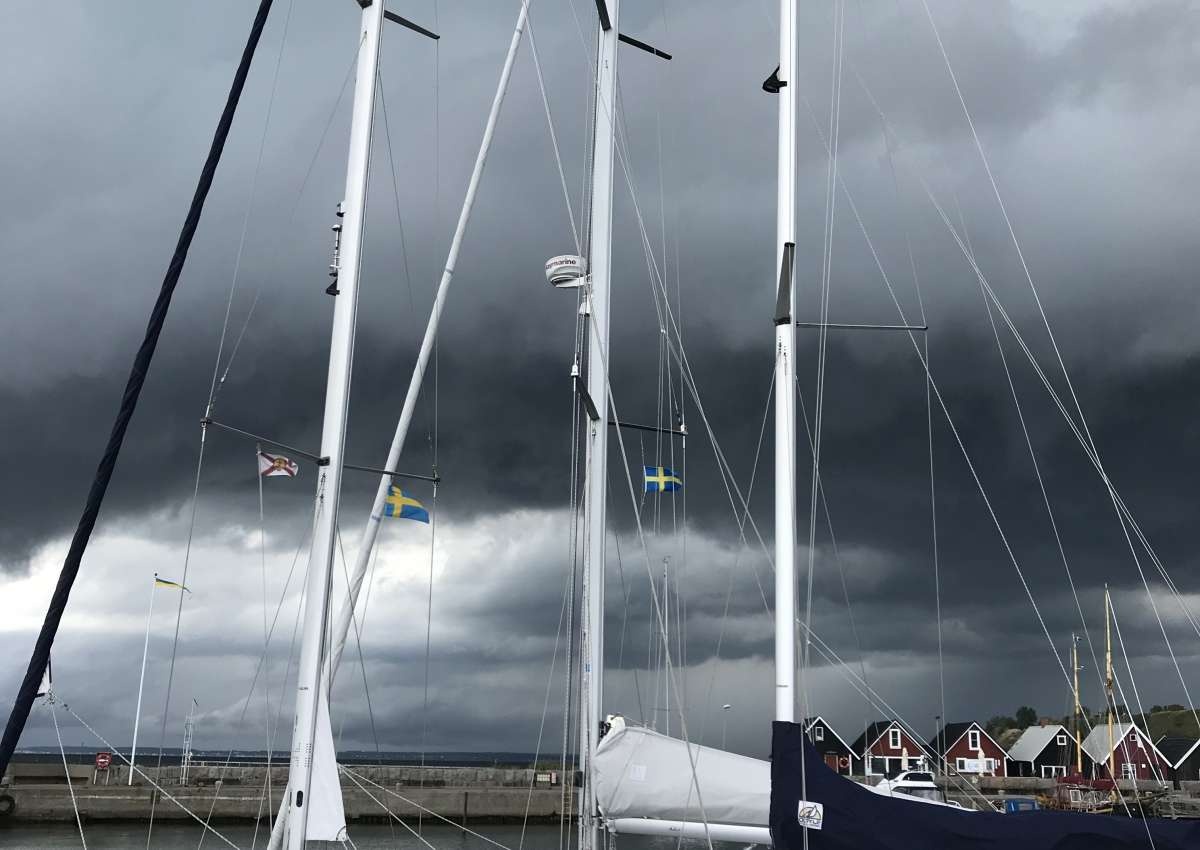 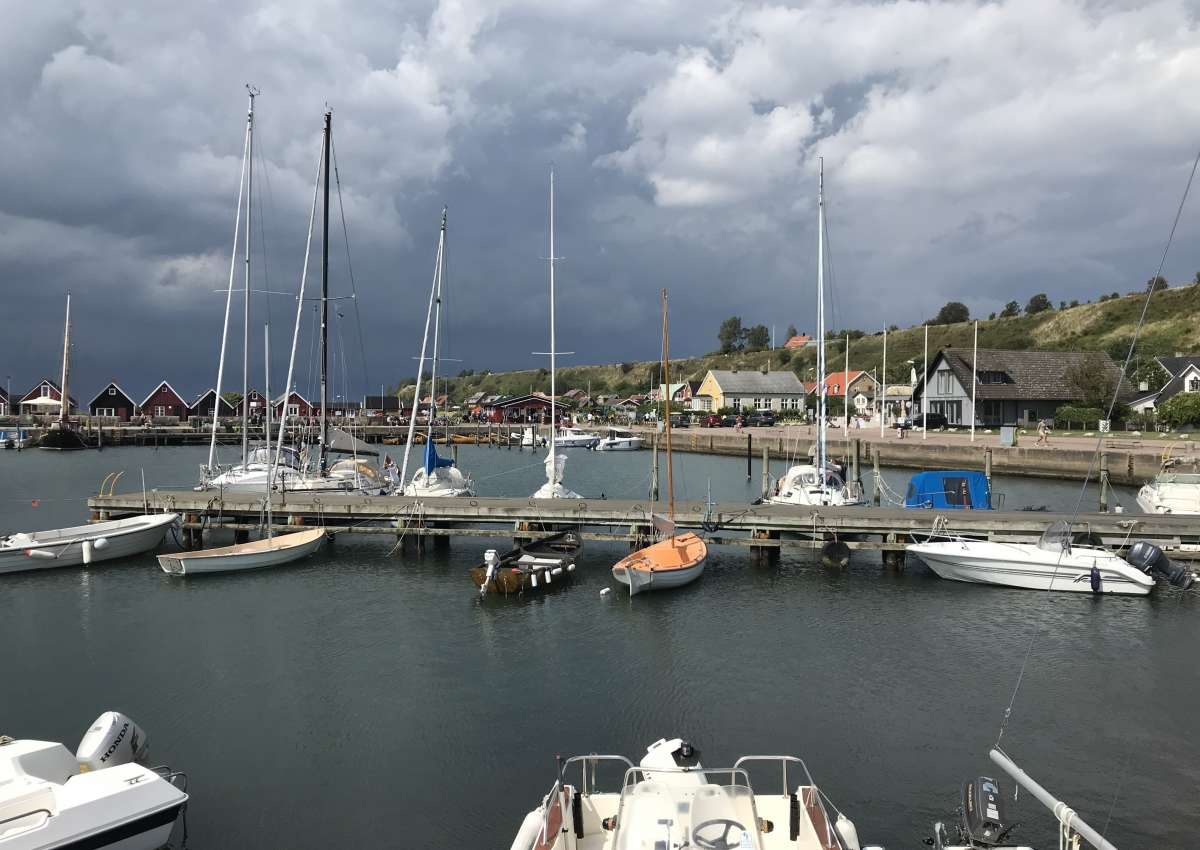 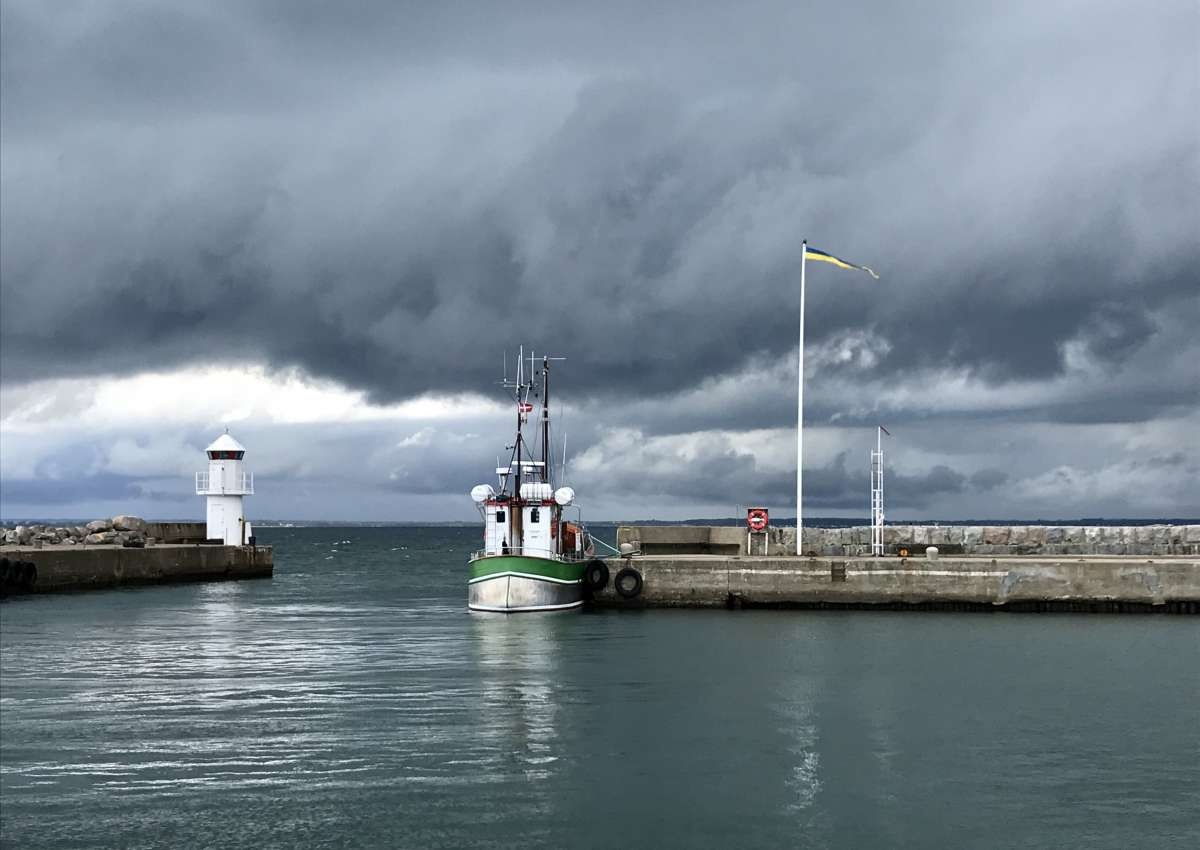 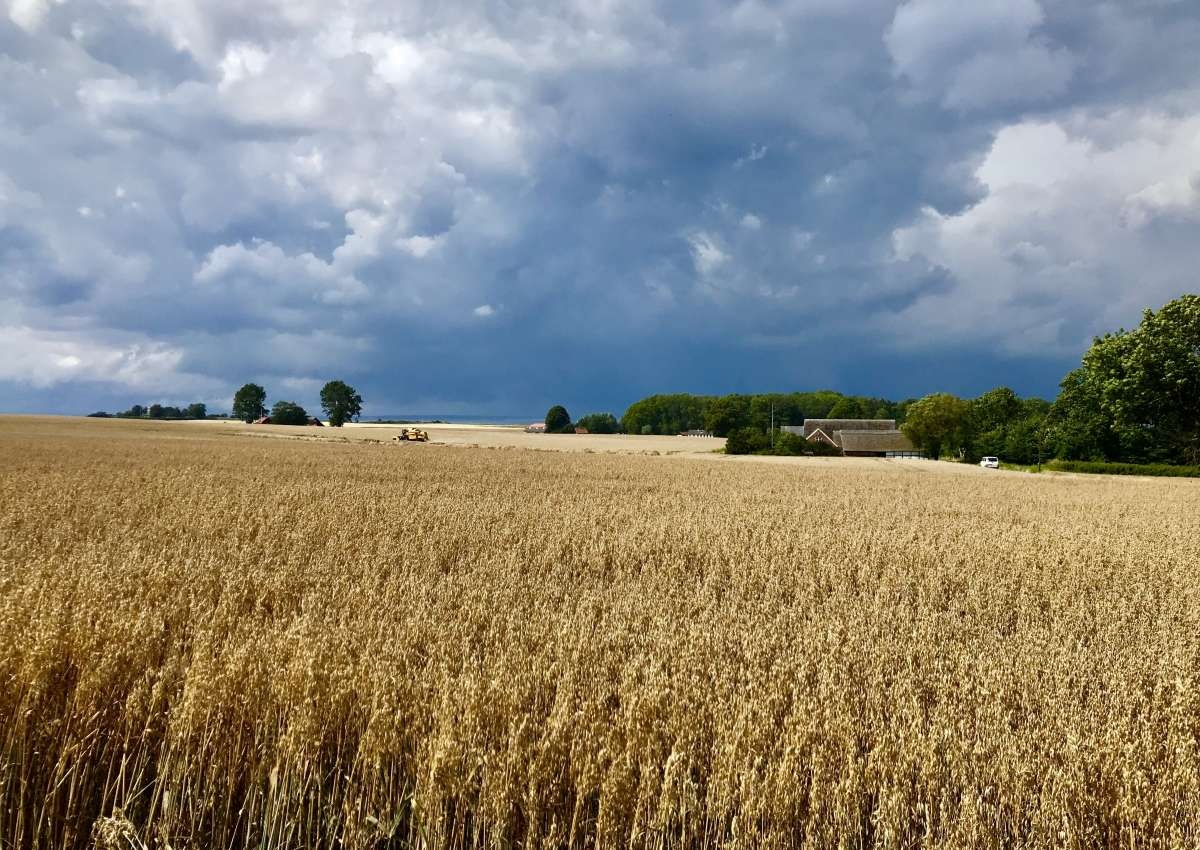 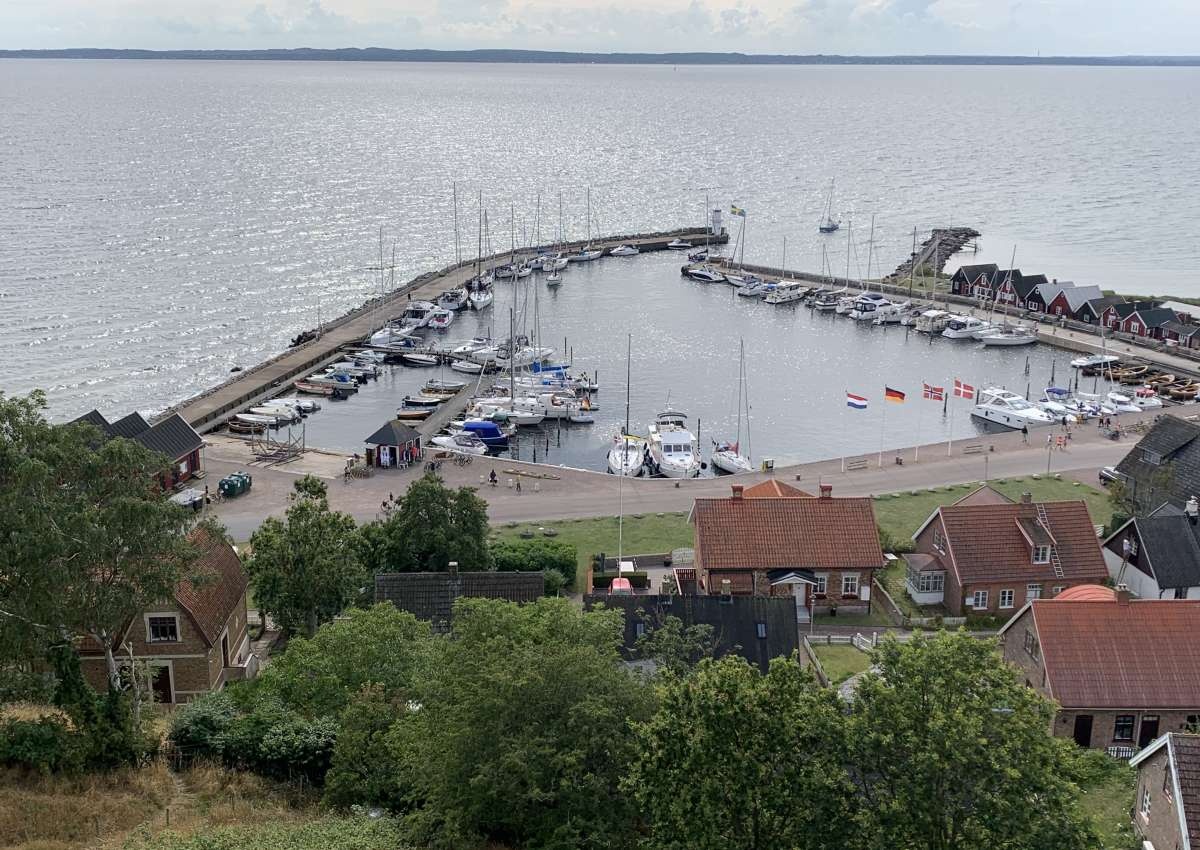 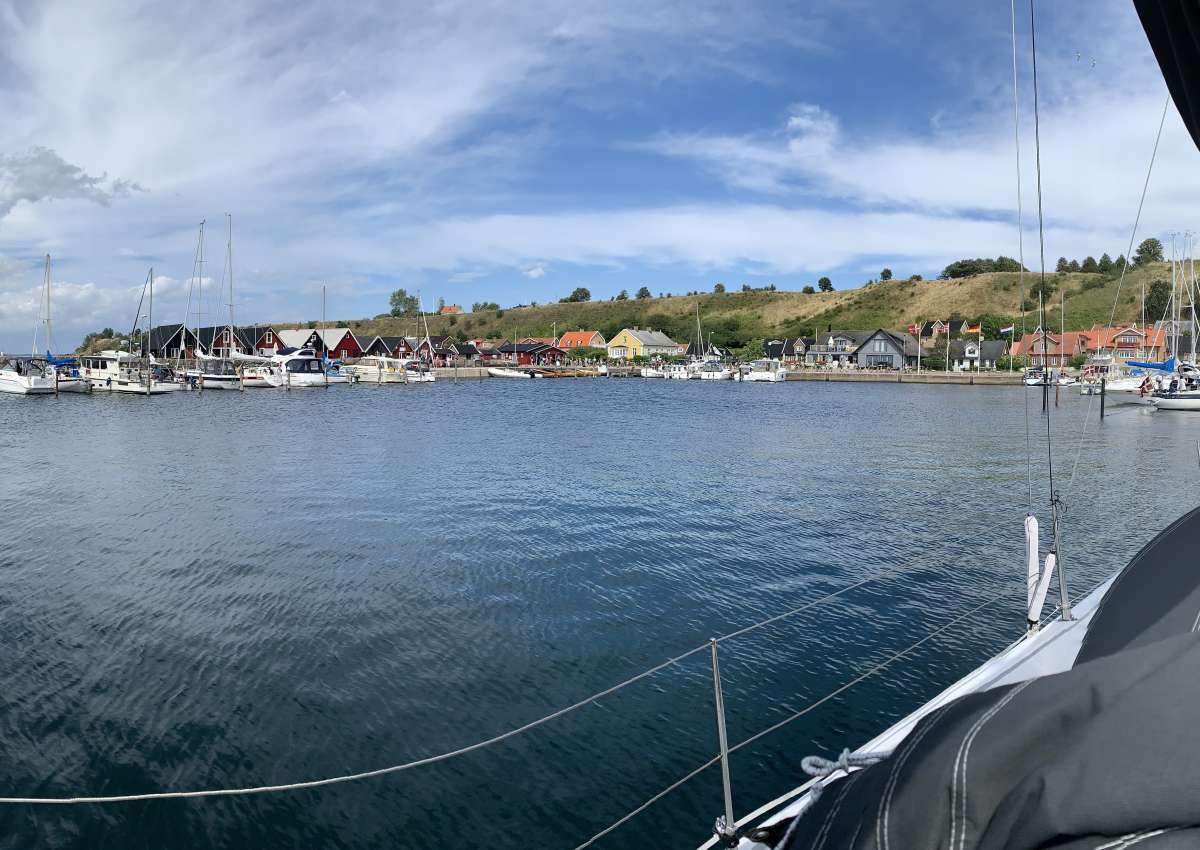 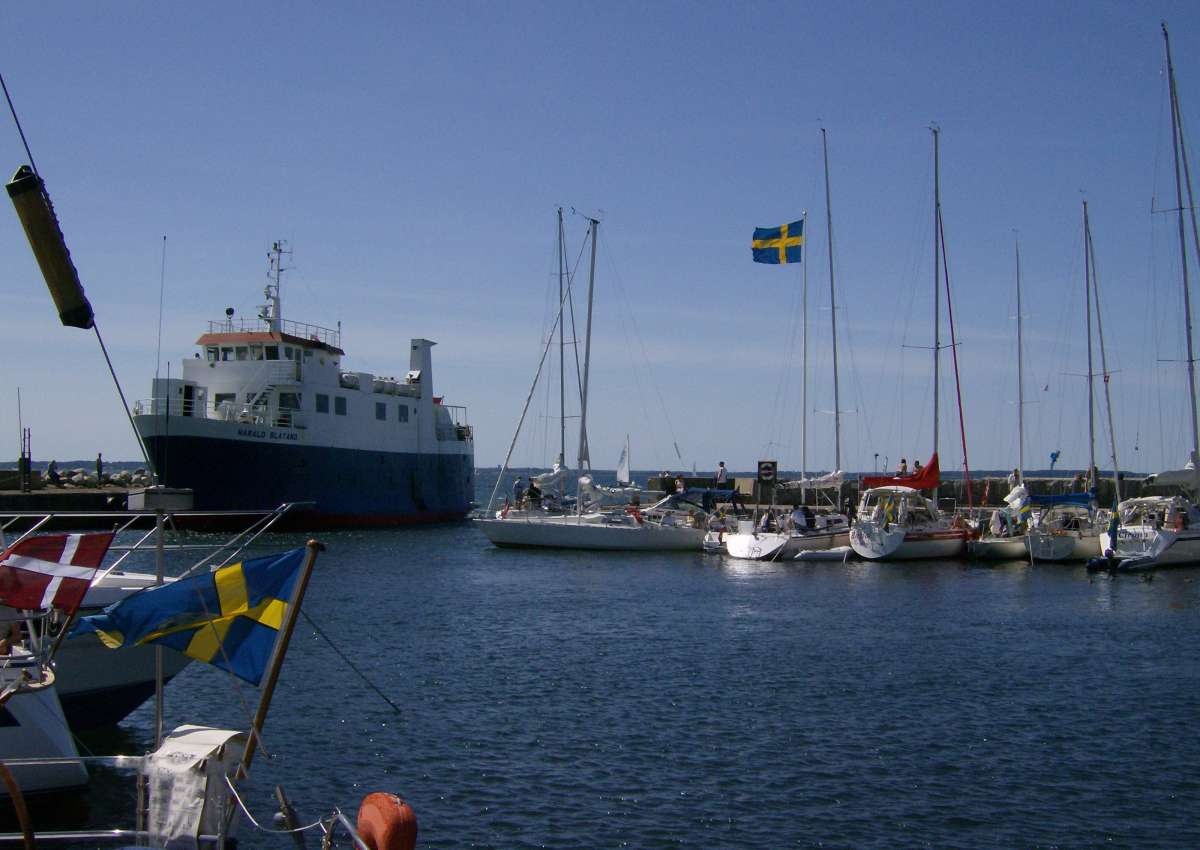 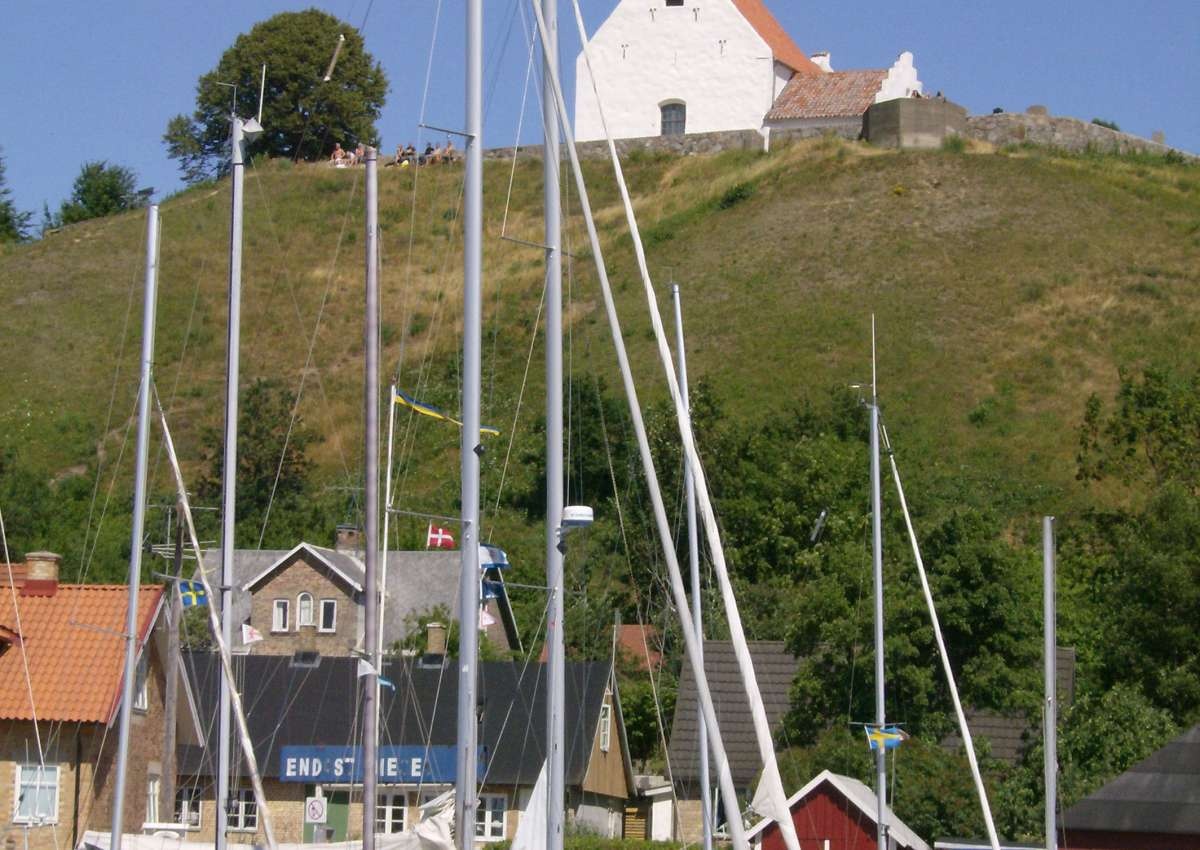 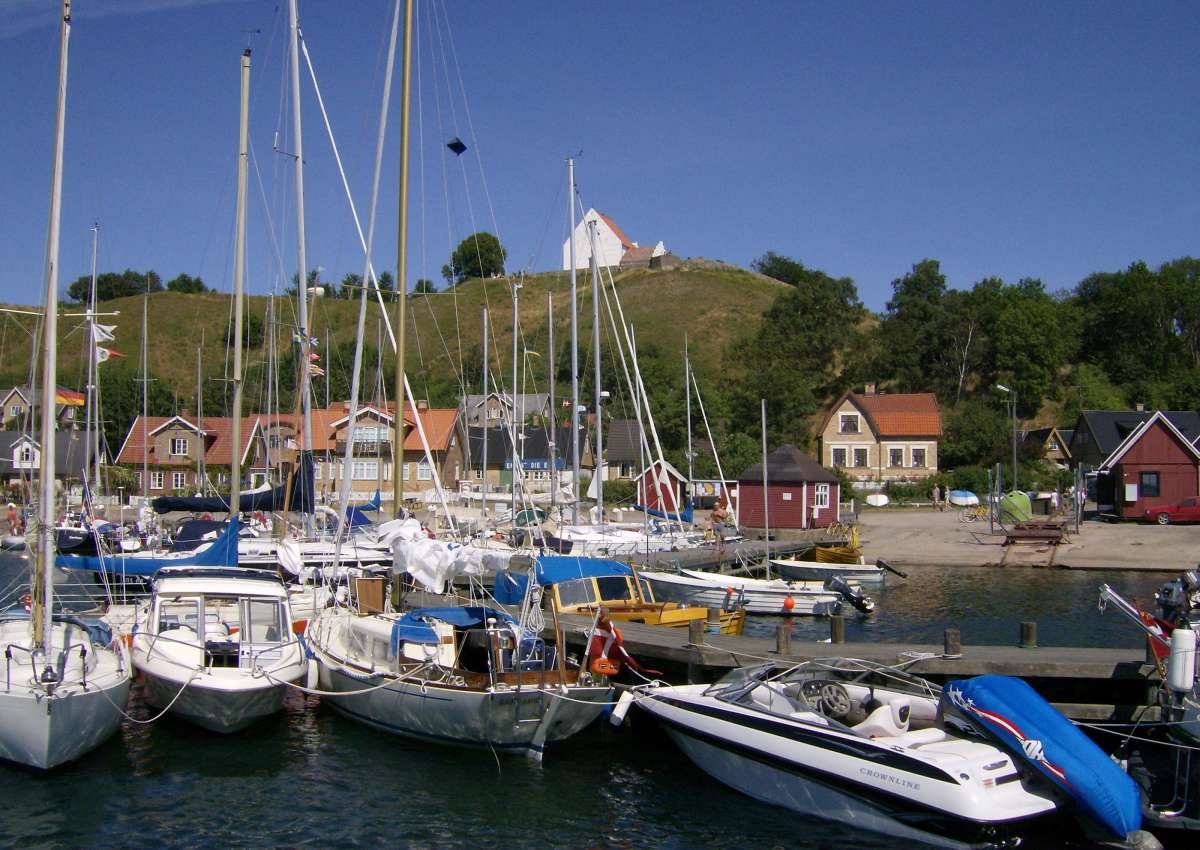 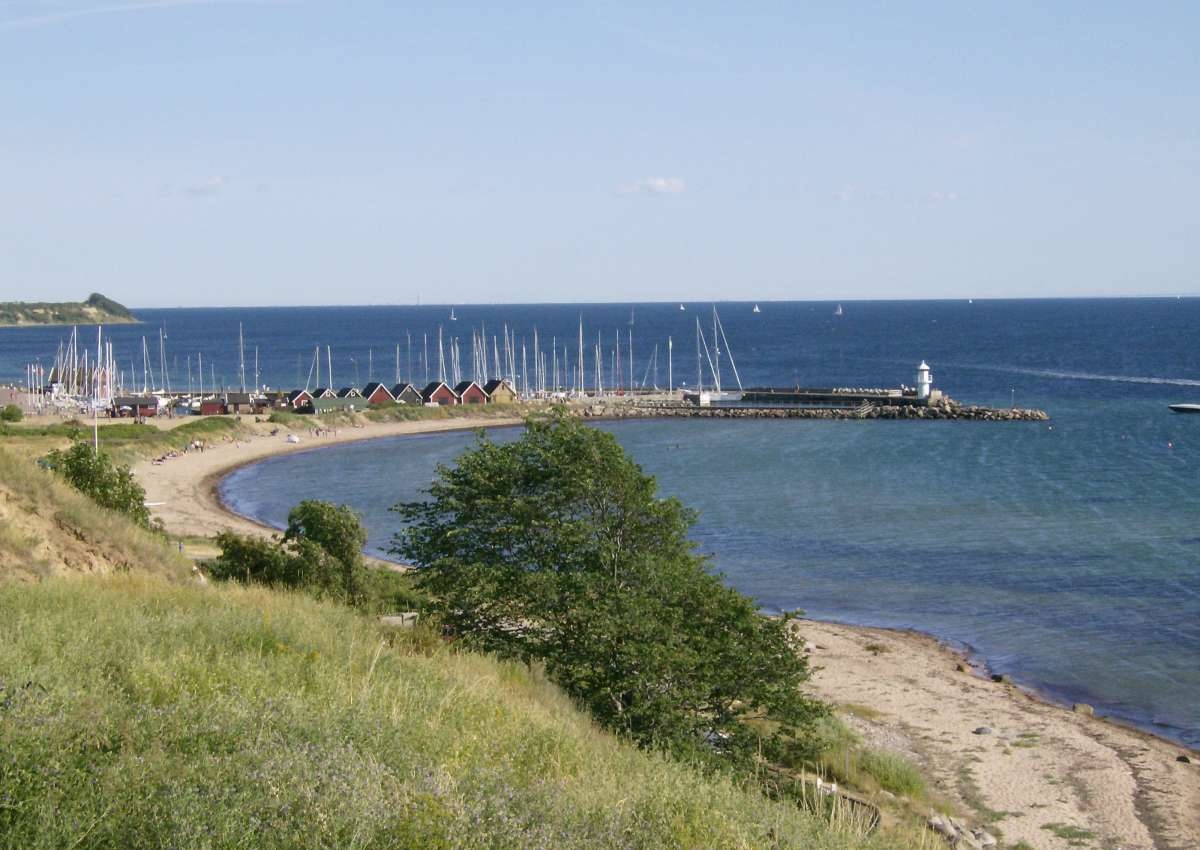 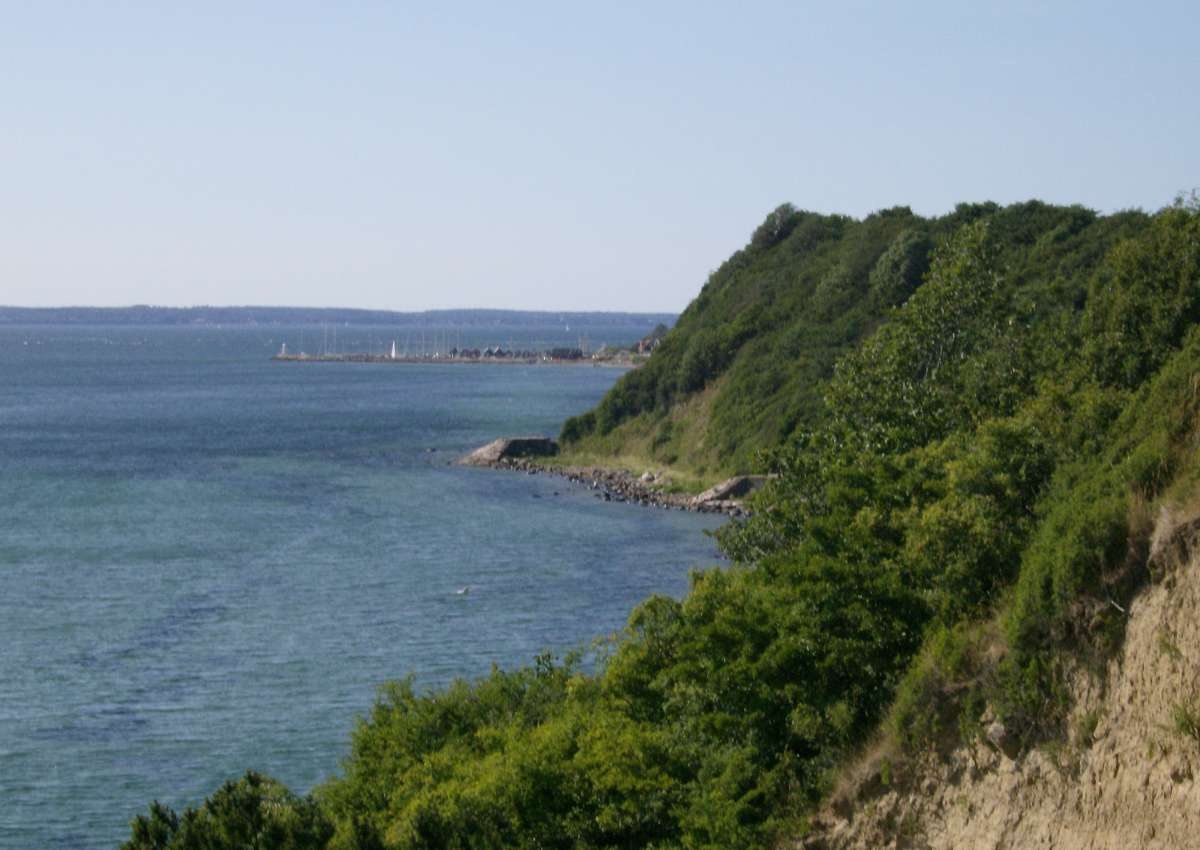 Small, cosy fishing harbour on the west side of the island of Ven, now mainly used by recreational boating.

The approach to the fired harbour is possible day and night. It is approached from the west in the white sector of the pier light (Iso.WRG.4s) via a buoyed dredging channel with a target depth of 2.7m. There is a risk of silting in the channel and in the harbour, so that shallower water depths have to be expected.

The harbour is often crowded at weekends. The most shelter - because of the intermittent steam swell - is provided by the quays in the northern part of the harbour. When the harbour is busy, mooring is done with stern anchors. The water depth in the harbour is 2.2 m.

Besides basic sanitation and fuel, there are limited supply options at the boat harbor kiosk.

The island's western harbour is the most visited on Ven - and arguably the most popular. Located just a kilometre from the 'capital' Tuna By, it's also the island's best-supplied port. Its location at the foot of a steep hill, on which the medieval St Ibbs Church towers, contributes to the popularity of Kyrkbacken, as do the smokehouse in one of the red-painted wooden cottages, the café-restaurant in the "Köbmanshuset" and the attractive old houses all around. A kiosk offers ice cream and other treats, and amber found on the steep banks is sold in a wooden shed by the harbour.

The first building on the way from the settlement to the centre of the island is the old fieldstone church, which is well worth seeing and serves as an excellent landmark for seafaring above the moorings. The church from the 12th century is the oldest preserved building on the island. It is named after the feudal lord lb Skalmson of Hildesborg Castle, who once resided north of Landskrona. On a ship's voyage he got into distress off Ven. Fishermen from the island noticed the sinking boat and put their own lives in danger when they rescued the count. The nobleman thanked them by building the church above the shore where he was saved. From the church's small graveyard there is an excellent view of the settlement and Kyrkbacken harbour - and across the Sound to Zealand. Votive ships and old candlesticks decorate the interior of the church, which is well worth seeing.

A less tranquil sight is the bunker on the church hillside, remnants of a sad chapter in German history.

A number of old farms and houses dating from around 1850 can be seen in Tuna By, a kilometre to the north-east. However, the usual close-knit development of historic gems is not to be found in the village. It is difficult to discern the centre of the village among the scattered houses. The largest village on Ven offers, apart from the Tuna-Krug (with café terrace), the "Smedjegården" with a beautiful café garden (by the new church), a bank and several smaller galleries, also a small supermarket at the south-east exit of the village. Nearby is the island's "New Church", built in 1899. And a few metres away, visitors to the Tycho Brahe Museum will learn about the most famous islander of earlier days.

Born in 1546 at Knutstorp Castle in Scania, Brahe was sent to Copenhagen University when he was only 13. A solar eclipse at that time sparked his interest in astronomy. During many study trips he deepened his knowledge, during which a macabre incident occurred in Rostock. During a duel with another nobleman, Tycho Brahe lost a piece of his nose. Since then he wore a prosthesis on his nose, which he always fixed with the help of an ointment.

On November 11, 1572, he discovered a star in the constellation Cassiopeia that no one had sighted before. This celestial body, a supernova, with a hundred times the light intensity of the Sun, is probably the first observed star in history. Tycho Brahe recorded its position with a sextant, observed its luminous intensity and color, and wrote down the data in a small book, "De nova Stella." He showed that the star belonged to the space of the fixed stars, in which Aristotle did not want to know of any change. Therefore, Aristotle's doctrine faltered with Brahe's discovery, while Tycho Brahe's research results soon made him world famous.

The Danish King Frederick II, who wanted to win the scientist as his court astronomer, offered him the island of Ven as a fief for life. Brahe built the Uranienburg in Dutch Renaissance style in the middle of the island, at the highest point, 45 metres above the sea. The castle, which can be seen as a model in the museum, was laid out strictly symmetrically. The building itself no longer exists, but found remains of the walls are on display in the museum. A few years later he had the observatory Stjaerneborg built with underground rooms for the instruments. The observatory, which has been restored in parts, can be seen near the museum.

The universal genius Tycho Brahe, who was not particularly popular with his fellow men, constructed all kinds of instruments and had his own paper mill built on the island because of his immense consumption of paper (location: see map). For 21 years Brahe lived and worked on the island, but neglected his duties as feudal lord of the isle.

He fell out of favour with the new king, Christian IV, and was finally forced to turn his back on Ven for good in 1597. He died in Prague in 1601.

While the castle and observatory gradually fell into disrepair in the 17th century, Tycho Brahe's records made their way in a roundabout way to Copenhagen, where they are now among the greatest treasures in the Royal Library.

In the meantime, Ven took a development that did not please the islanders at all. In the Peace of Roskilde in 1658, the island was granted to the Swedes. The Venerians, who for centuries had almost exclusively maintained trade relations with Denmark, found it difficult to come to terms with the new masters. An impoverishment of the island was the consequence. It was not until the 19th century that the islanders experienced more prosperous days. Brickworks were started, agriculture and fishing flourished, successful shipowners settled on Ven and the Crown held hare hunts on the island.

If you leaf far back in the island's history book, you will learn that Ven was formed 4500 years ago after the third ice age - along with many Danish islands. Since then, the sea and wind have worked mainly on the cliffs on the southern and western shores of the island. In the process, the forces of nature have often unearthed relics from the original inhabitants of Ven. The oldest finds of dwellings date from around 2500 BC. Later, the Vikings recognised the island's favourable strategic position. Historians attribute the Battle of Svolder between the Danish king Sven Gabelbart and the Norwegian king Olav Tryggvasson to the island. Svolder, they suggest, is a shortening of the old island name "Sandvolleöen". Nothing remains of the Viking castle "Hammars Slott" near the hook, and no archaeological treasures have yet been discovered at the Viking landing places shown on old maps (see map).

The island almost took a far less glorious development than in Viking times in more recent times, after wealthy Swedes took it into their heads in 1966 to turn the entire island into a Disneyland with hotels and casinos. The islanders successfully resisted. Today, any new buildings on Ven are forbidden. Nevertheless, the wave of tourism spills over from the Swedish mainland by ferry every year. The fact that these are mainly day visitors is evidenced by the 700 (!) bicycles parked at the Bäckviken ferry port (see there) are available for hire.

The island bus - a tractor with trailer - takes you to both Tuna By and Bäckviken.

The island offers hiking opportunities galore. For example, you can walk around the entire coast on a shore path and go amber hunting along the cliffs. Also the round hike over Mossen (see plan), is to be recommended. The fact that hardly any cars use the few island roads makes visiting Ven a pleasure.