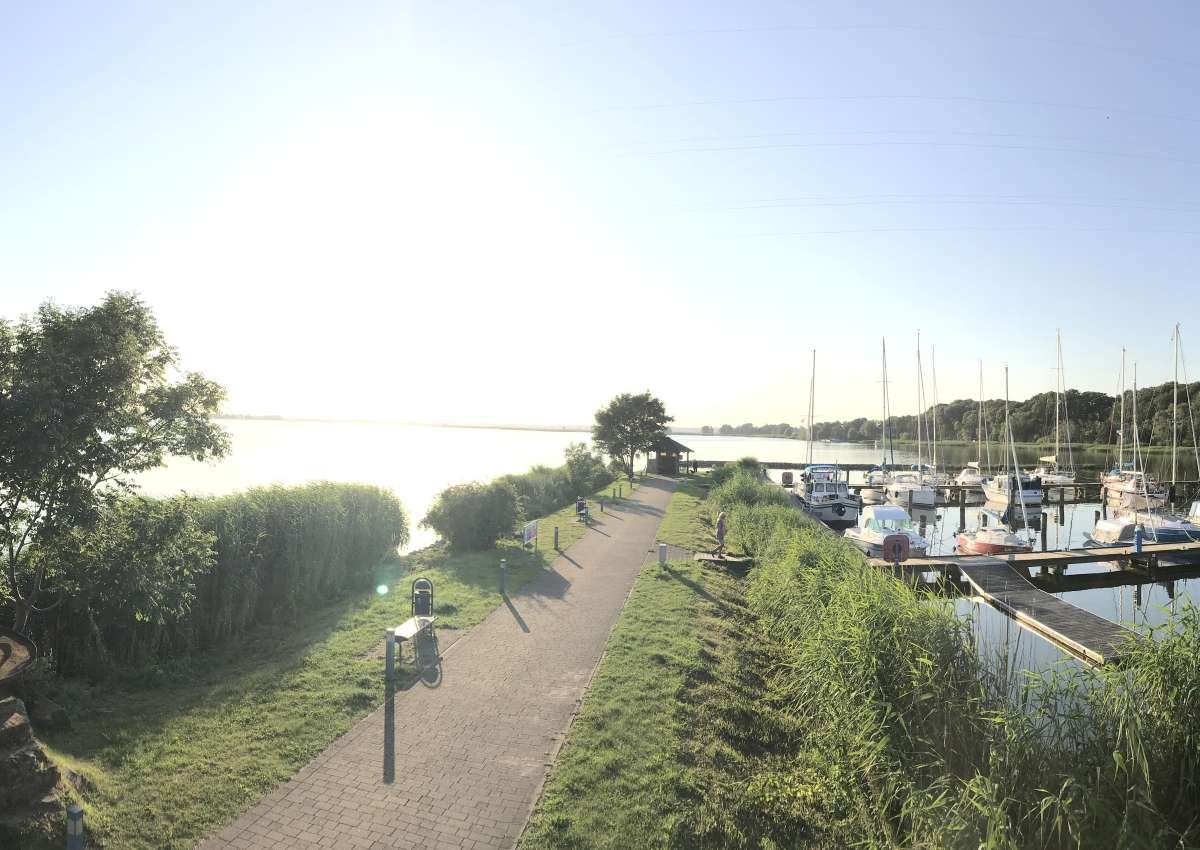 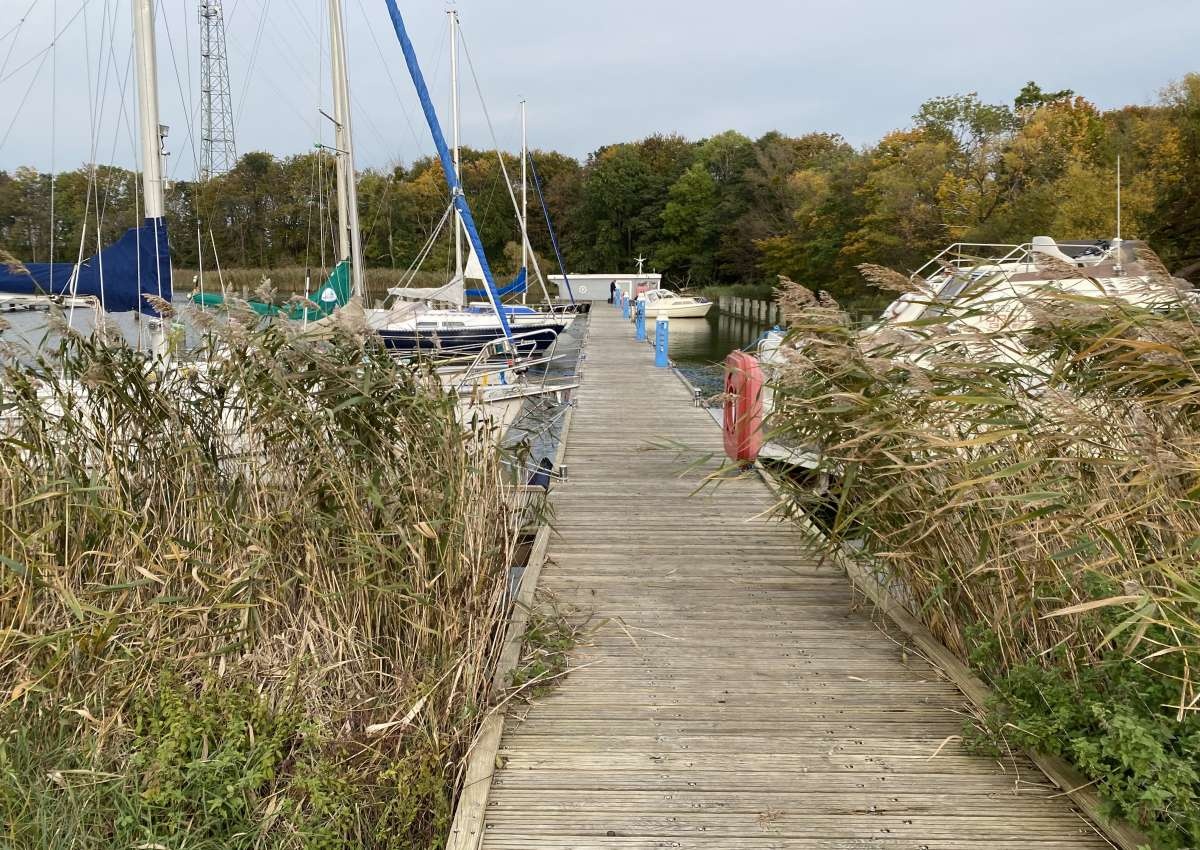 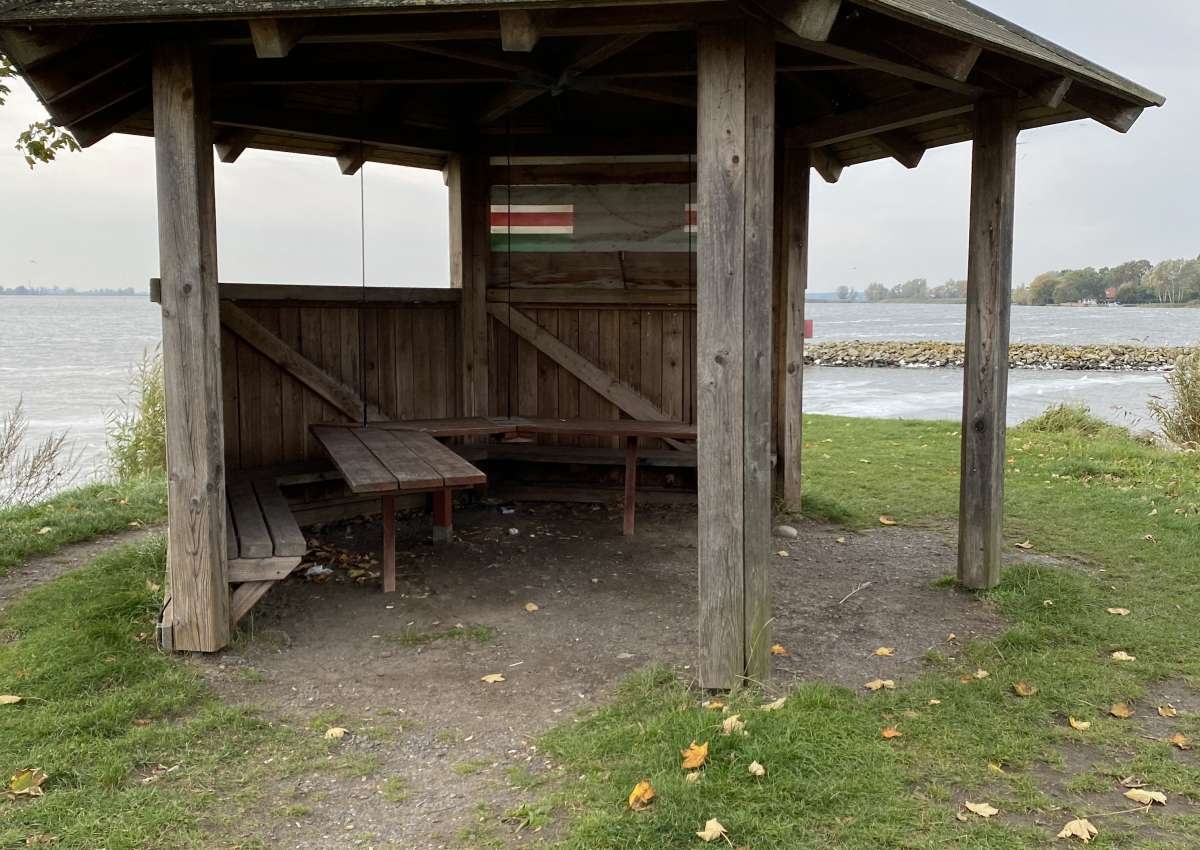 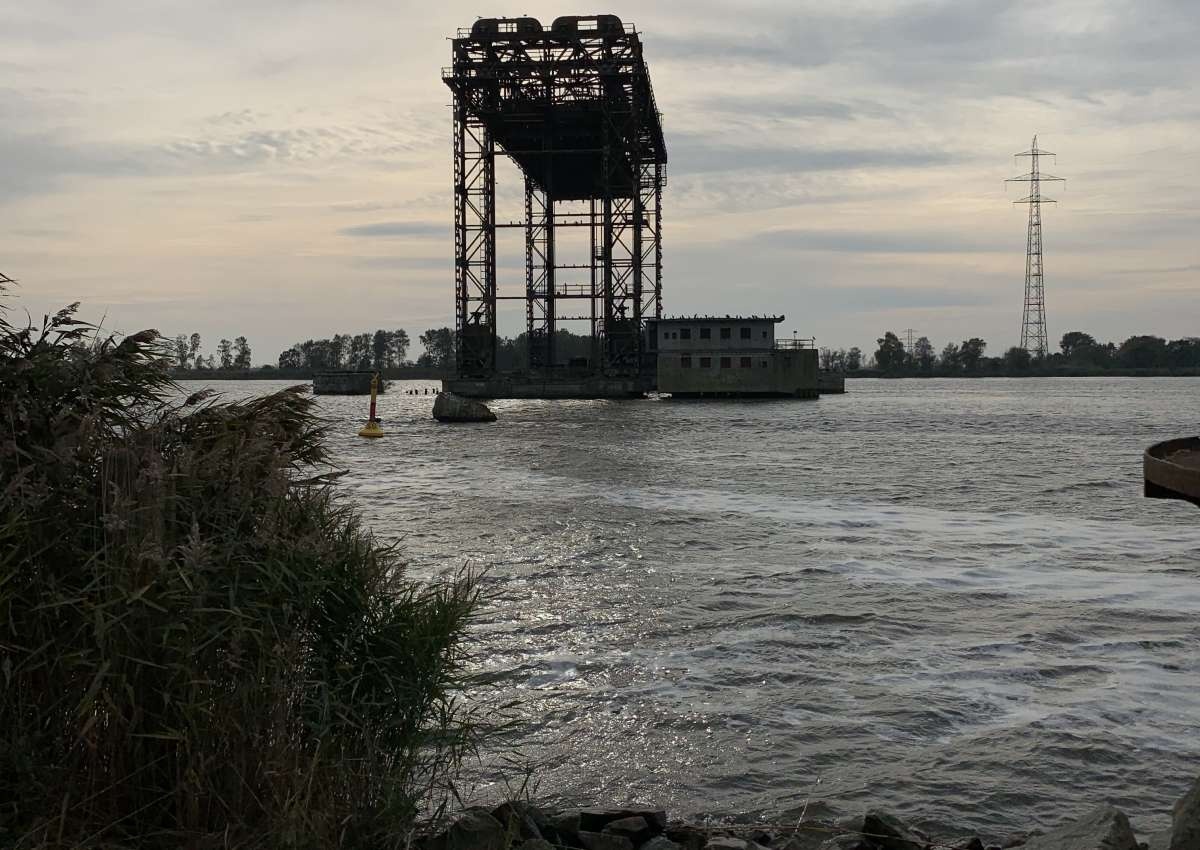 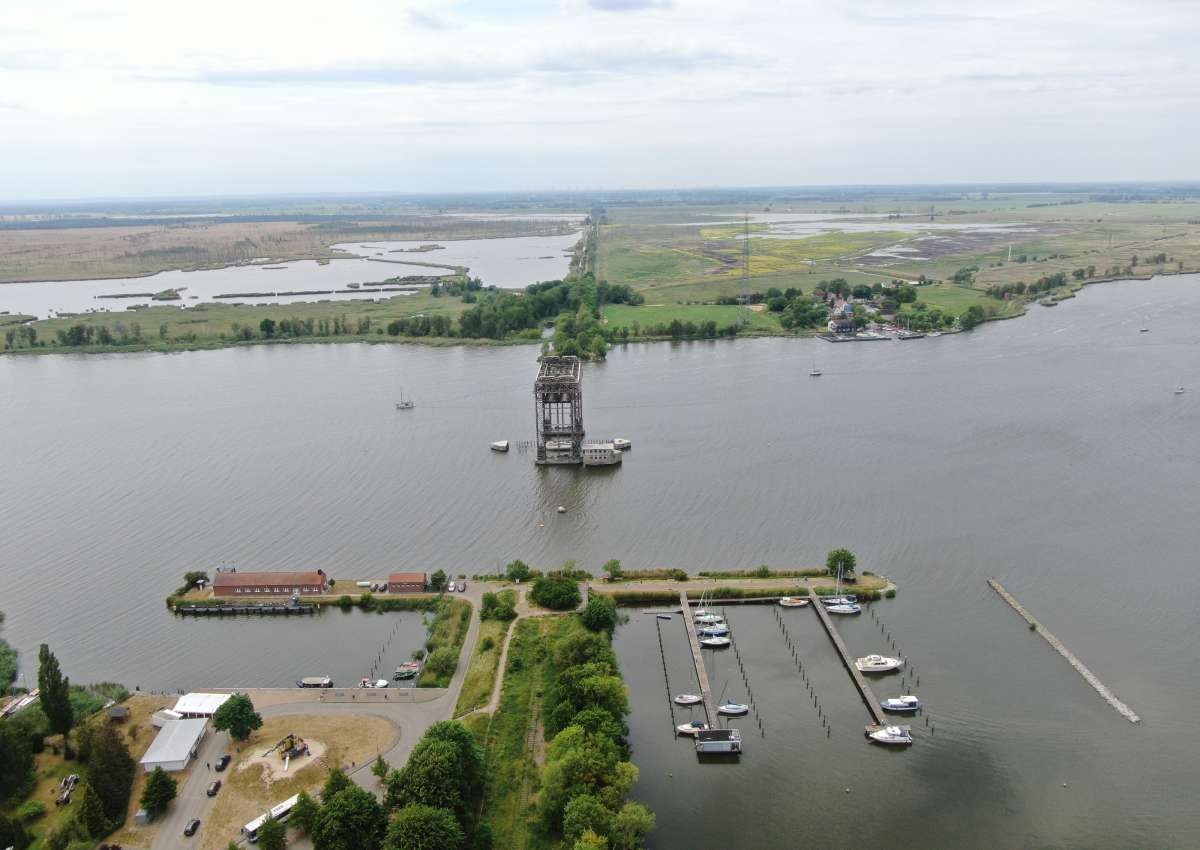 Near the Karnin lift bridge, which has been largely destroyed, there are four mooring options: Karnin on the Usedom side, Marina Karnin and Karnin Haffschänke as well as Kamp on the southwest shore

The approach is uncomplicated during the day. However, the blasted bridge piers are to be respected. At night, it is essential to use searchlights. To the west of the bridge remains, a high voltage power line (H=27m) spans the stream.

Near the largely destroyed Karnin lift bridge there are several mooring possibilities:

KARNIN: Small authority and marina east of the bridge remains. There are no fixed berths. Yachts use the NE quay, where the water depth is 1.3 - 1.8m; the west pier is reserved for authority craft.

MARINA KARNIN is located NW. One lies between stern pilings in 2.6m water depth. There are modern sanitary facilities.

KARNIN / "Haffblick": Very small harbour near the old signal tower, 300m south-east of the bridge remains with 0.9m water depth. Water and WC are available at the inn.

The idyllic surroundings invite you to take long walks. You can also walk along the old railway embankment.

Nice playground in front of Office.

The marina at Karnin, a scenic spot, has retained a certain charm from days gone by. Moreover, absolute tranquillity is guaranteed as long as the bridge connection to the other shore is not restored. Once hailed as an engineering marvel, the 600m long Karnin Lift Bridge was blown up by an SS commando in the final days of World War II and never rebuilt. The bridge was part of a high-speed rail link from Berlin to Swinoujscie. In Swinemünde, the railway carriages were transported in ferries to the Swedish coast.

Only the enormous iron hoist in the middle of the stream, together with the bridge keeper's house, remained as a "technical monument". It took three minutes to raise the lifting section of the bridge 25 metres. The platform with the rail track was raised one last time before the other parts of the bridge were blown up and still stands in this position today.

Recent plans to remove the iron monstrosity failed because kestrels have discovered the bridge as a nest for themselves. There are said to be 15 pairs that go about their breeding business here, undisturbed by humans.

Today, traffic rolls over the Zecherin Bridge, a few kilometres away. However, there is no railway bridge to Usedom. Wagons are only brought to the island by ferry via the Trajekt connection at Wolgast harbour.

The once largest railway lift bridge in Central Europe was built using a special riveting process by a company from Frankfurt/Oder, which also created the Nieder-Fienow ship lift (see: Oder-Havel connection) and the famous Golden Gate bridge.

Karnin is unlikely to get another bridge any time soon, partly because Swinemünde is now Polish and ferry traffic to Sweden runs via other axes (Warnemünde). In any case, the old bridge remnant is certified by experts to be in excellent condition. Theoretically, it could be restarted.

From the times when the train, known throughout the country for its speed, thundered over the bridge, the railway house on the bridge embankment still dates.

This house near the harbour is suffering from "old age", but its half-timbered construction alone makes it an impressive building on the former railway line from Berlin to Swinemünde.

The village's signal tower is the second building that recalls livelier times in Karnin. Flags were once raised at the still-existing signal tower to communicate with sailors.

At the foot of the hill by the tower, you can stop at Walter Genz's restaurant - an inn with a coffee garden right next to the private small-boat harbour. Locals and those who know the area also moor here directly, if the draft of the boat allows it. Those unfamiliar with the area should not try it.

Small as the village of Mönchow is 300 m to the east, it has two sights to offer: a church and a very impressive mausoleum in the cemetery opposite the church. The imposing mausoleum is a burial place created around the turn of the century for the influential C. Dannefeld family, surrounded by an elaborately forged iron fence. The fence is half rusted, the small garden overgrown and the mausoleum has also suffered from the ravages of time. But the small burial house with its architectural gimmicks is always worth seeing.

The two small settlements of Karnin and Mönchow no longer have a pastor. The place of worship is looked after from Usedom. If you're lucky, you'll find an opportunity to visit the little church when the pastor from Usedom looks after Mönchow or gives a sermon here.

The little harbour Kamp, opposite Karnin, has been run by an association since 1995. Smaller festivals are held annually during the summer season. Otherwise, the surroundings of the fishing village offer landscape idylls with views of the bridge ruins.

Zecheriner Brücke: At the Zecheriner bridge, there is a cane weaving mill with a small private harbour on the Usedom side. There, among other things, shade dispensers and plaster support mats for nurseries are produced. The harbour is only suitable for short stays, for example to see how the cane products are made by hand weaving.