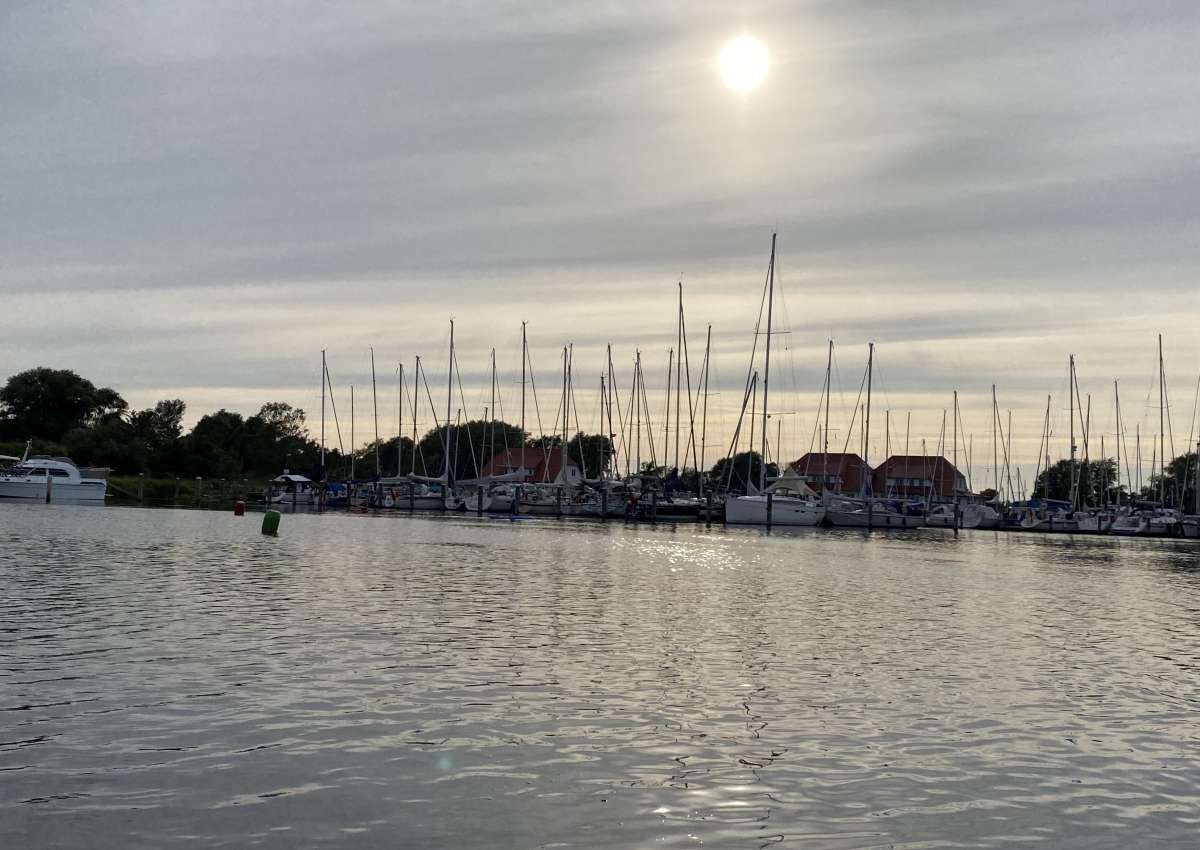 Beautiful main village on Hiddensee on the eastern shore of the scenic island. The marina Lange Ort is privately run and only in operation every six months from 15 April to 15 October of the current year.

The approach to Vitte is only possible during the day for those not familiar with the area. The fairways to the Hiddensee harbours are partly very shallow at the edges, be careful with oncoming or overtaking passenger ships ! To get to "Langeort", turn north in the fairway behind buoy 3A/S1 into the marked approach. A lookout at the bow is advisable.

In the marina "Langeort" sanitary facilities, electricity, water, WLAN, a kiosk and a large barbecue area are available.

The village of Vitte offers good supply possibilities, several restaurants, a supermarket, fresh fish and a bicycle rental. The island administration of Hiddensee is
located here.

When the village was still one of the trading posts of the Hanseatic League, living conditions were characterized by modest prosperity. With the decline of the Hanseatic League came poverty, which was still so pronounced around 1810 that travellers delivered shocked reports. Even after the abolition of serfdom, the island location made it easy for landlords to oppress the few inhabitants. Old archives show that people were sold by the piece like cattle  at will. In surviving contracts they are listed next to barrels of herring as merchandise.

The sad proof that even more oppression and poverty was possible was provided by the new landlord Ritter Wilhelm von Bagevitz from 1800 onwards. He turned the remaining independent peasants into serfs and increased the levies and servitude into the unbearable. When Gustav Adolf IV of Sweden abolished serfdom, the landlord of Bagevitz took the law into his own hands and successfully did everything to stifle any budding resistance. Even schooling was a thorn in his side. He refused any social support.

In 1818, the Stralsund theologian Gottlieb Christian Mohnike told of dwellings glued together from peat and sod, in which up to three families lived along with horses, cows and feathered cattle. And that was not all. According to the travelogues, some of the peat cottages in Vitte were also used for smoking. But the smoke cottages lacked a chimney. The smoke rose through a hatch to the attic and had to find its own way out past the smoked hams and fish. Most of the time, however, the people in the lower room were smoked along with the smoke and, as one traveller describes it, could not open an eye.

Also the Rügen chronicler Johann Jacob Grümbke describes the poor houses in 1805 in his "Streifzügen durch das Rügenland" as "architectural bungles". Nevertheless, the "gimpy figures of these huts, with their coverings of seaweed, their masonry of peat or fieldstones, and their small peepholes, which sometimes consist of salvaged ship's windows," had something picturesque about them.

It was not until 1836 that conditions changed, that the oppression was ended, when the Stralsund monastery of the Holy Spirit acquired the island. Gradually, solid half-timbered and stone houses were built.

Today, Vitte is not only the administrative seat of Hiddensee, but also the largest village on the island with 650 inhabitants. Sights are some well preserved thatched fishermen houses and the beautiful house of Asta Nielsen. The building of the famous Danish film actress, who died in 1972, is located in the northeast of the village, near the marina.Today it is a museum.

The old house marks on the fishermen's houses are striking. Around 1900, these rune-like signs could still be found on the western and central Baltic coast. Nowadays they are said to exist only on Hiddensee. The Vitter marked their house and fishing equipment with the signs. Even today you can see sheep with house marks on their coats. On gravestones in Kloster sometimes only the house mark and the year of death are written.

Fishing nowadays takes a back seat to tourism as a source of income in Vitte, but still plays an important role. Apart from herring, pike-perch, cod and flounder are caught on the west side, while eel is mainly found east of Vitte. Perch and pike feel most at home east of Neuendorf. Plump herring nets, according to a Vitte fisherman's tale, announce themselves by a northern light in spring.

The small ferry island on the heights between Vitte and Neuendorf Plogshagen is separated from Hiddensee by the Bäk, a shallow arm of water about 200 metres wide. The water area between the ferry island and Rügen is called the trough. For centuries, traffic to and from Hiddensee passed through the small island, i.e. via Trog and Bäk. Today, the island is a closed bird sanctuary with wild sheep.

In addition, the ferrymen had to act as ice pilots in winter, a dangerous task. Here, the ice pilot pulled the mail behind him on a sledge, while the travellers followed him at set intervals.

The moorland south of Vitte is an inviting place for hikes. Halfway between Vitte and Neuendorf, the "Heiderose" restaurant offers a place to rest and recharge your batteries.

The Gänsewerder to the east of the Gellen is a protected, uninhabited island.